This entry was posted on September 23, 2022 by Lee Sproats

Space-Comm Expo is an annual UK-based two-day exhibition held at the Farnborough International Conference Centre (the home of pioneering aviation history) where the space sector industry meets, networks and does business. In addition to the exhibition, there is a full conference programme of lectures given by world-class expert speakers.

This year the event ran from Wednesday 7th to Thursday 8th September 2022 with over 150 exhibitors and Baader Planetarium were there for the event represented by our CEO Johannes Baader, sales engineer Linus Niekamp and our UK representative Dr Lee Sproats. Our booth showcased PlaneWave and 10Micron products, our Baader domes as well as our observatory installations, that can be used for a wide range of scientific applications that include space situational awareness (SSA), satellite laser communication and astronomy. On display for demonstration we had the amazing new PlaneWave Delta-Rho 350 widefield imaging telescope sitting atop the PlaneWave L-350 direct drive mount which is capable of slew speeds up to 50 degrees per second for fast target acquisition and satellite tracking. 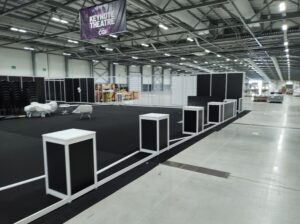 The stands in the main hall were still partly under construction - but they were all finished by the afternoon. 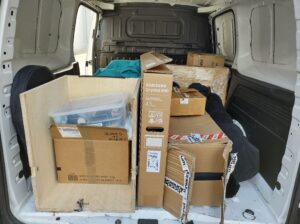 Items for our booth in the van - there is actually a PlaneWave L-350 mount and DeltaRho 350 somewhere in there!

Preparations and planning for the event began several months beforehand with various floorplan designs being made, and then ordering of the furniture, electrical and lightining to fit with our final design alongside preparing brochures and posters and filling in lots of paperwork. A few days prior to the event the telescope and other display items, which had all resided in a secure storage facility since its appearance at the UK National Astronomy Meeting in Warwick, was dismantled in readiness for packing into a van for its journey alongside our other booth display items to the event.

At 7am on the Tuesday, the day before the event started, preparations began to set up our booth starting with the large backwall, display TV stand, display tables and brochure stands. Next in line was the PlaneWave mount (separated into the AZ base and L-mount segments) and telescope. This took a little while to get from the van to the stand as there was a shortage of trolleys but after a little wait all telescope parts were on the stand ready for assembly. 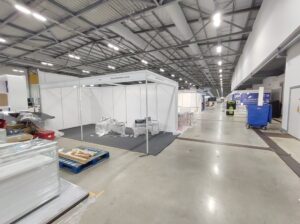 Our booth ready for setting up our display items. 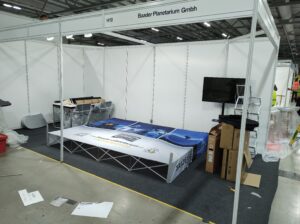 Making good progress on the set up by mid morning. 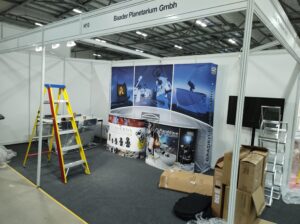 Nearly done...just the telescope to get from the van and set up next. 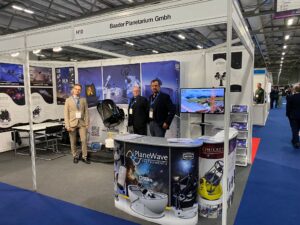 All done set up. Ready for the attendees. On the stand is the PlaneWave L-350 and DeltaRho 350 and our CEO Johannes Baader (right), Linus Niekamp (left) and Dr Lee Sproats (middle).

Johannes and Linus arrived early afternoon to help with the final parts of the stand setup left to do and then our stand was ready for showing to the attendees next day.

The first day of the Expo event arrived and after a hearty English breakfast and short journey to the venue we were ready to begin. After a tannoy announcement to the exhibitors to formally announce that the show was now open, a steady stream of people came through the door. Alongside the trade stand exhibits, there was a near continuous series of free-to-attend talks, some of which we attended, on space-related topics from a wide range of speakers from popular science communicators such as Dallas Campbell and Dr Maggie Aderin-Pocock and from the UK Space Command, UK Space Agency, business development and service and satellite mission personell amongst others. 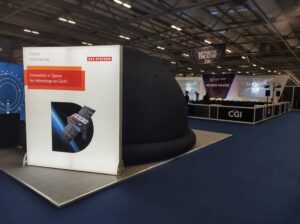 As the day progressed more and more people passed through the venue and by our stand and this was repeated on the second day. Over the course of the two days we did have a great amount of interest in our stand with the PlaneWave telescope, which was in demo slew mode, and our TV display showing our domes and installations drawing people's attention and attracting people over asking about it and which lead to other conversation topics too. It was also interesting that a lot of people were amateur astronomers themselves many of which had heard of Baader Planetarium and many had a range of our accessories. After the show closed on the first day there was a nice welcome buffet reception for all the exhibitors to attend and this gave an opportunity to meet other attendees and to have more dicussions. The second and final day was as busy for us as the first with more interesting discussions being had. Towards late afternoon it started to quieten down before the show officially closed at 430pm and then the usual rush to get the stand and its display items dismantled began. What took a few hours to set up was all dismantled and packed in the van in just under an hour! 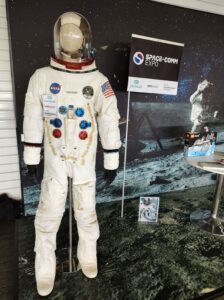 Not the original real spacesuit that Neil Armstrong used, but the one that was actually used by Ryan Gosling portaying the astronaut in the 2018 film "First Man".

On driving away from the event back to our hotel we all considered Space-Comm to be very well organised and was certainly worth attending - even more so as we had seen the spacesuit worn in the film First Man!  🙂

More information about the Space-Comm Expo can be found at: https://www.space-comm.co.uk/