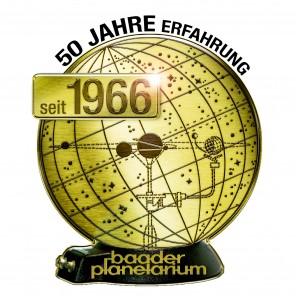 Baader Planetarium is situated near Munich / Germany. The Company was founded in Munich 1966 and has produced over 15000 school type planetaria since then, as well as 500 observatory domes of all sizes.

The history of the name Baader in Astronomy however dates back to the year 1852, when Michael Baader opened an Optical Manufacturing Company in the middle of Munich, after having worked since 1838 in the optical glass works Company of "Martin Woerle" and being married with Woerle's daughter. Woerle had gained deep knowledge in the production of optical glass and the secrets of production and testing of achromatic lenses under direct supervision of "Josef von Fraunhofer", one of the founders of modern optics and inventor of the "German Mount".

More than 600 Achromatic Refractors up to 5" aperture had left the "Optische Fabrik M.Baader" in the time from 1852 to 1870. Baader Telescopes won prizes for excellent optics and mechanical workmanship at a number of International Industrial Fairs of that time from Berlin to Paris. Seven telescopes of Michael Baader are still to be seen at the present Company as well as the prize awarding documents.

Claus Baader, the founder of the modern Company Baader Planetarium had designed a sophisticated orrery in the early sixties, which had been patented in 1966. It was one of the first astronomical instruments of German origin to be tested in the magazine "Sky and Telescope". It was the late Owen Gingerich, then at the Smithsonian Institute, Harvard University, who concluded:

"... Ingeniously engineered and constructed in Germany, this unit is without doubt the most sophisticated tellurium ever made available on a mass-produced basis."

"... The Baader instrument's most novel contribution and most spectacular effect has been achieved by enclosing the tellurium within a semiopaque plastic shell representing the celestial sphere. The motorized solar machine is readily viewed through the near side of the plastic shell; but the near and far sides combined appear virtually opaque, thus giving the remarkable effect of a darkened hemispherical canopy of stars regardless of the direction from which the mechanism is examined."

Throughout these 50 years, countless students in all the world have had their first encounters in "heavenly mechanics" with the aid of the "Baader Planetarium".

In 1995, after the passing of our founder, the "AG" (German Society of Professional Astronomers) assigned Minor Planet 5658/1950DO the name "clausbaader", in honoring his lifelong work and achievements for astronomical education.

Over the years, the finemechanical skills required for the elaborate gear Systems in various sizes of Baader Planetarium Instruments (the largest being 1,3 Meter in diameter, with all nine planets and moons in their correct, geared orbits) have lead to producing a whole family of astronomical accessories to increase the capabilities of many astronomical telescopes.

Besides of this, another branch inside the Company already had produced huge numbers of projection domes for the Baader school type Planetarium, which – 50 years ago – eventually led to producing astronomical domes as well.

Today some of these domes serve as remote controlled robotic observatories under worlds most adverse climatic conditions. One of our domes is situated at 2965 Meter
(~ 10000 feet) above sealevel right at the very top of the "Zugspitze" – Germany's highest mountain. Anotherone serves at Europe's highest observatory at 3700 Meter above sealevel at the "Jungfraujoch" in Switzerland, just beside the famous "Eiger-Northface". Both locations are enduring wind loads of measured 300 km/h (185 miles/h.

Whatever your requirements are in this wide field of Astronomy, we try hard to make your task a little easier and we give greatest care to our products, to have them made – not as cheap, but as good and affordable as ever possible.

You surely know about our patened "Baader AstroSolar® Safety Film" – it is a good example of what we are constantly trying to achieve.

Try us – and be thanked for your trust.

On November 7th, 1995 the founder of the company Baader Planetarium - Claus Baader - was honored for his contributions to the astronomical education within the meaning of the Copernican world view with the naming of a minor planet 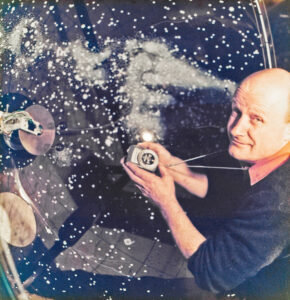 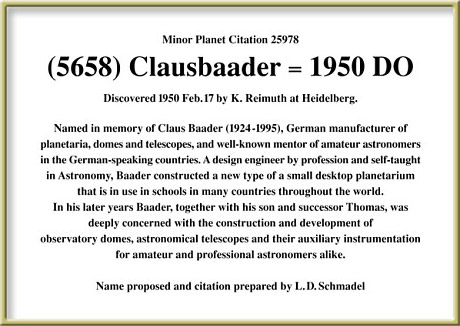 (5658) Clausbaader = 1950 DO.1950 DO.Discovered 1950 Feb. 17 by K. Reinmuth at Heidelberg.Named in memory of Claus Baader (1924-1995), German manufacturer of planetaria, domes and telescopes, and well-known mentor of amateur astronomers in the German-speaking countries. A design engineer by profession and self-taught in astronomy, Baader constructed a new type of a small desktop planetarium that is in use in schools in many countries throughout the world. In his later years Baader, together with his son and successor Thomas, was deeply concerned with the construction and development of observatory domes, astronomical telescopes and their auxiliary instrumentation for amateur and professional astronomers alike.Name proposed and citation prepared by L.D.Schmadel.