This entry was posted on 23. Februar 2022 by Team Baader Planetarium 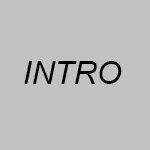 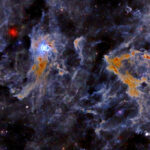 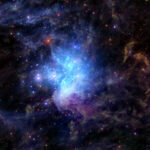 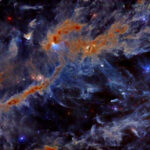 Both, CMOS and CCD cameras designed for (amateur) astronomy typically have a spectral sensitivity from 400nm to more or less 850nm. But RGB filter sets for astronomy only use the range from about 400nm to 700nm and the on-sensor color filter arrays of consumer cameras only cover about 420nm to 640nm. That means, about one third of the spectral bandwidth is wasted.

The three central filters used for the Sloan Digital Sky Survey (SDSS) split the the spectral range of interest into three approximately equal parts: G': 410nm to 550nm, R': 555nm to 695nm and I': 695nm to 845nm. So these filters would be a perfect choice for three-color images with modern cameras. That's probably one reason why these filters became quite popular in professional astronomy. But professionals normally use custom-made filters which are out of reach for amateurs.

Baader Planetarium is now the first company which offers these SDSS filter to a wider clientele.

This article presents tests and first lights of the long awaited SDSS G', R' and I' filters and compares them with RGB shots. All SDSS filter images in this article are taken with QHY600L cameras and Nikon 300mm f/2.8 AF-S lenses at full aperture.

There is not much to write. No reflections or diffuse halos are visible. It makes no difference whether the filter is placed close to the sensor (in a distance of about 35mm) or in the filter holder of the lens (distance to sensor about 120mm).

The following pictures are shots from an artificial star. They are up-scaled by factor 6 without interpolation. Size of each pixel (block in the up-scaled image) is 3.8µm. Brightness is scaled linearly, but the scaling factor on the right side is 1000 times larger.

Three test shots are presented on separate pages. Click on the images below to view the results and for detailed descriptions. The pictures where captured with an array of up to three cameras, lenses and filters in parallel (the array was not fully operational at beginning). 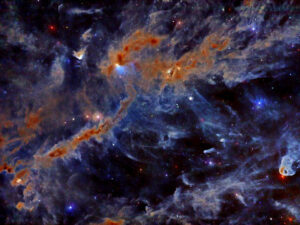 The filters perform as expected and show no reflections. These would be very critical, because stars where reduced by a factor of up to 40 in oder to make the faint nebulae visible. That kind of image processing cannot reduce reflections (because they are shifted depending on angle of incidence and distance of the reflecting surfaces) such that they would become very prominent.

Water vapour absorbs infrared radiation (and according to Kirchhoff's law of radiation it also emits in the same wavelengths). The effect is even measurable in visible spectrum: if there is a lot of water vapour in the atmosphere the sky becomes reddish. In infrared the effect even becomes more significant.

On the other hand, sky is blue (due to Rayleigh scattering of the molecules in the atmosphere), even at night. That means, without water vapour sky is darker in (infra)red than in blue. These effects, water vapour and blue sky, more or less compensate each other. Nevertheless, in order to optimize the observation session both issues should be considered if filters are changed during the night('s):

The test shot where captured in parallel which allows to quantify then sky conditions during the test shots. The average brightness ratio for G':R':I' of the sky measured during the test shots was about 4:4:1 (± 10%). The color factors which compensate the quantum efficiency and transparency (in order or achieve white stars) where about 1:1:2 (± 10%). This leads to a background SNR ratio of 1:1:1, i.e. at same exposure time the SNR (which is mainly determined by the background photon noise) is approximately the same for each filter if the stated color calibration factors (which lead to white stars) are used.