This entry was posted on November 30, 2016 by Team Baader Planetarium

The Baader Universal Filter Changer (or UFC for short) is a very versatile simple system for using, mounting and changing (or swapping) filters in and out of a light path. The UFC can be used for imaging where you may want to swap different filters (e.g. LRGB) between a camera and a telescope but do not want the bulk, or expense, of a filter wheel. The UFC can be used between a camera and a Celestron RASA 11/14(36) or a Starizona Hyperstar system where the overall size and shape of a filterwheel causes issues. You can also use the UFC for visual purposes where you can easily switch between different colour filters between a telescope and an eyepiece.

The image below shows the standard "exploded" diagram of the parts that make up the Baader UFC. We've colour-coded it to highlight the main different parts (see below). At present there are 30+ parts to the whole UFC system in total. The large number of components may seem somewhat overwhelming at first glance, and can lead to some confusion, and that the system is complicated. However, we hope this series of blogs will help show how simple, and effective, the UFC is.

The Baader UFC is really quite simple. Although looking at the diagram above it looks complicated and crowded....you will only really need.....four (4)....main parts! We have colour coded each section in the diagram above to make it easier to understand. To put it simply, you will need: a camera-side adaptor (part #1) and a telescope-side adaptor (part #2) in addition to the core part of the system called the UFC Base unitpart #3) sand then a sliding filter drawer for your filter (part #4)

The Baader-UFC is the priceworthy answer to an ever growing problem. New camera-models come to market in ever increasing speed. Spacers between 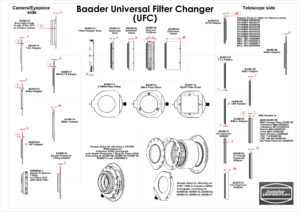 telescope and camera don´t support the correct distance or are subjected to torsion due to their flimsy design and heavy cameras. And the owner may want to change the telescope - or use several OTAs, but does not want to purchase new filters and filter sliders all the time. The Baader-UFC is a (seemingly) simple answer to a complex problem. It is made in the typical Baader-way, trying to connect each and everything in the most elegant and flexure-free manner.

The camera-side of the UFC-Base (the filter-chamber) remains open towards the camera - until the matching camera-adapter gets mounted directly onto the UFC-Base. The purpose of this is to have the filters mounted with minimum distance to the image sensor, avoiding additional vignetting.

The telescope-side of the UFC-base carries a receptor with 6 clamp screws in 60° spacings, to mount all the Baader-proprietory S 70-dovetail-adapters and spacers. A number of rigid UFC-S 70 spacer tubes is available in 5/15/40 mm length , as well as an ultra-stable S 70 VARI-LOCK spacer, engraved with Millimeter scale and being seamlessly adjustable from 15 to 20 mm. These four spacers will allow precise adaption with almost any backfocus situation, for both - back and prime focus - instrument configurations. Please accept the six tiny set screws, they are dearly necessary at times, when correct spacing becomes difficult. Each joint must be able to rotate, while requiring only a minimum of optical length.

Just one "click" onto the brass-pin releases the filter holder from the magnetic fixture. Afterwards it can be removed easily

Another set of telescope-adapters, with the male S70 dovetail facing the camera-side, completes the assortment, enabling the user to mount the UFC-assy onto almost any telescope firmly and flexure free. For the RASA-adaptation we even mill this RASA/S70 adapter plate from stainless steel, in order to provide the necessary stiffness while retaining the extremely thin flange tolerances required for the RASA-design.

For any telescope, for any camera - just replace the corresponding adapters on either side of the filter chamber when you change telescope or camera and want to keep on using your trusted set of filters.

As added benefit any camera lens can be used with the UFC. In this case, the UFC-Base will be fastened in front of the camera-lens with adding both the S70/SP54 adapter #2459134 and the retaining flange #2459121, as well as one of the many step-rings of the Hyperion-ring-system (#2958028 - 2958082) to be found here. Note that filters ought to be mounted in reverse order when using the UFC-filter changer in front of camera lenses. 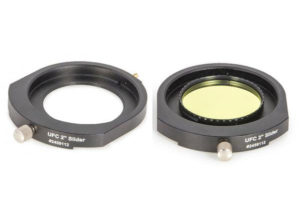 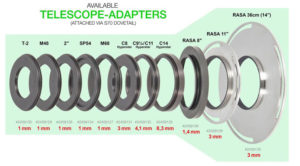