Comet Neowise in a different way

Comet NEOWISE is probably the most beautiful comet since 25 years on the northern hemisphere of the earth.

Comets are messengers from the time of origin of the solar system, frozen remnants of the primeval cloud from which the planets were formed. When they come to us from the cold depths of the outer solar system and thaw when they approach the sun, they spread gas and dust and create a unique celestial phenomenon. 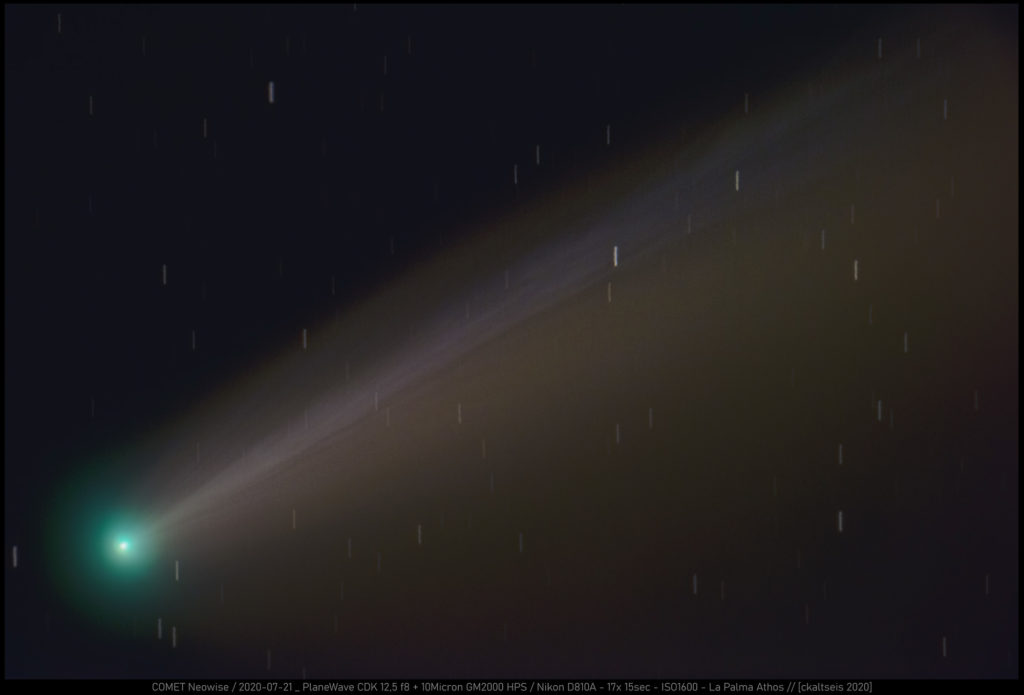 Most astrophotographers are understandably excited about the very beautiful tail of the comet NEOWISE and try to capture it in front of a beautiful backdrop. Others focus only on the inner core and the shell structure that is created when the dust leaves the spinning comet nucleus. But so far there are few high resolution photos of the interesting transition region between coma and tail, where the two tails of gas and dust fan out. A team from Baader Planetarium and Planewave Instruments, together with the professional photographer Christoph Kaltseis, has now succeeded in taking such a photo under the best conditions on La Palma at ATHOS - Centro Astronomico.

What can you see on the picture of Comet NEOWISE?

Gas and dust is constantly being ejected from the comet nucleus inside the coma when it has become warm near the sun. This nucleus is only a few kilometers in size, but produces a luminous phenomenon that travels millions of kilometers through the solar system. It is located in the middle of the green bow shock so-called "coma". The greenish glow occurs when gas is stimulated to glow by the electrically charged solar wind. This works similar to a neon tube in which gas glows as soon as voltage is applied. The light gas ions are blown away by the solar wind. Because this wind is variable, it causes turbulence in the bluish self-luminous gas plumes. The dust particles, on the other hand, are much heavier than the gas atoms and cannot be blown away so easily by the solar wind. They enter an orbit around the sun, so the dust tail is curved. And because dust does not glow itself, but reflects sunlight, the color is white/yellowish. The "stripes" in the dust are caused by the fact that nucleus of the comet does not emit dust evenly but there are changing fountains, similar to geysers on Earth. These are distributed over the whole comet nucleus. While the core rotates, other surface areas are warmed up again and again by the sunlight, fountains develop, forming dust rays which disappear after some time. 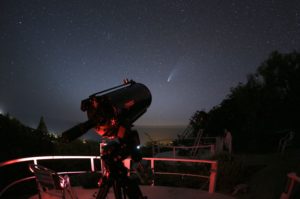 "The effort that Christoph Kaltseis and Michael Risch have put into capturing comet Neowise through its journey within our solar system helps us understand its characteristics even further;” said Ruben Nunez, European Managing Director for PlaneWave Instruments Inc.

The different images published worldwide have inspired many and we are here to support, experiment with, and guide astronomers. It has been a great experience to view our galaxy and other objects within our universe from La Palma, thanks to our host, Kai von Schauroth, owner of the ATHOS Centro Astronómico.