Does the FCCT fit the 533M? That seems a much more suitable camera for the RASA with its square and smaller sensor. So a lot of issues with tilt and distortion would simply not exist with the smaller sensor camera.

-1
We now received the first samples of the QHY 533 M/C cameras and are happy to say that the FCCT II fits both of them. Also the optical distances stay the same so that it will work. Please see the Application GIF to the left on the example of the QHY 533C camera, it works the same way for the monochrome version. 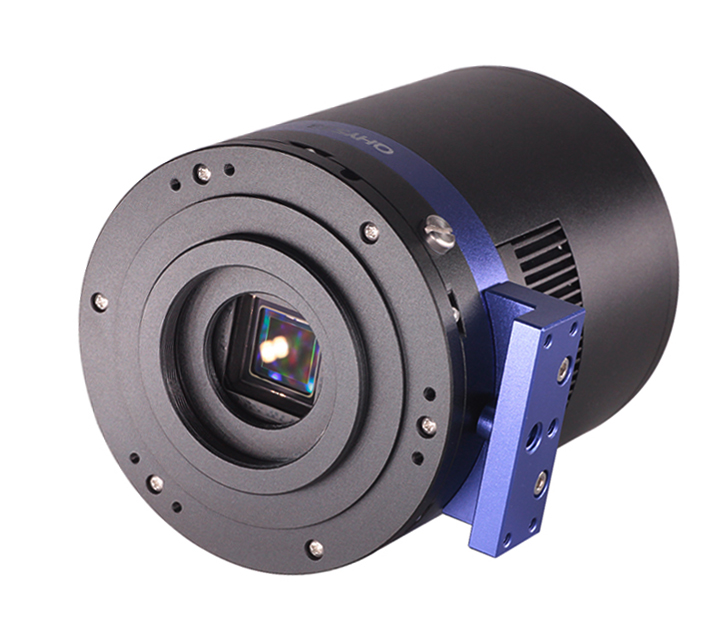 We at Baader Planetarium consider the QHY 533 M/C to be a very good and reasonably priced entry-level camera. It has everything a modern CMOS camera can do. For amateur astronomers interested in all areas of astronomical photography, the QHY 533 C/M can cover a wide range of your images. With its BSI Sony sensor, the camera is extremely sensitive and low-noise in the deep sky range. Thanks to the good cooling performance, long exposure times can be realized with it. The pixel size of 3.76 x 3.76 µm is optimally adapted for shorter focal lengths of 500 to 750 mm. Optimal for RASA and Hyperstar telescopes. Canon and Nikon telephoto lenses are also adaptable with a required backfocus of 55 mm. Due to the function of selecting only a small area of the sensor (ROI), also the solar, lunar and planetary photographers - besides the deep sky area - get their money's worth. 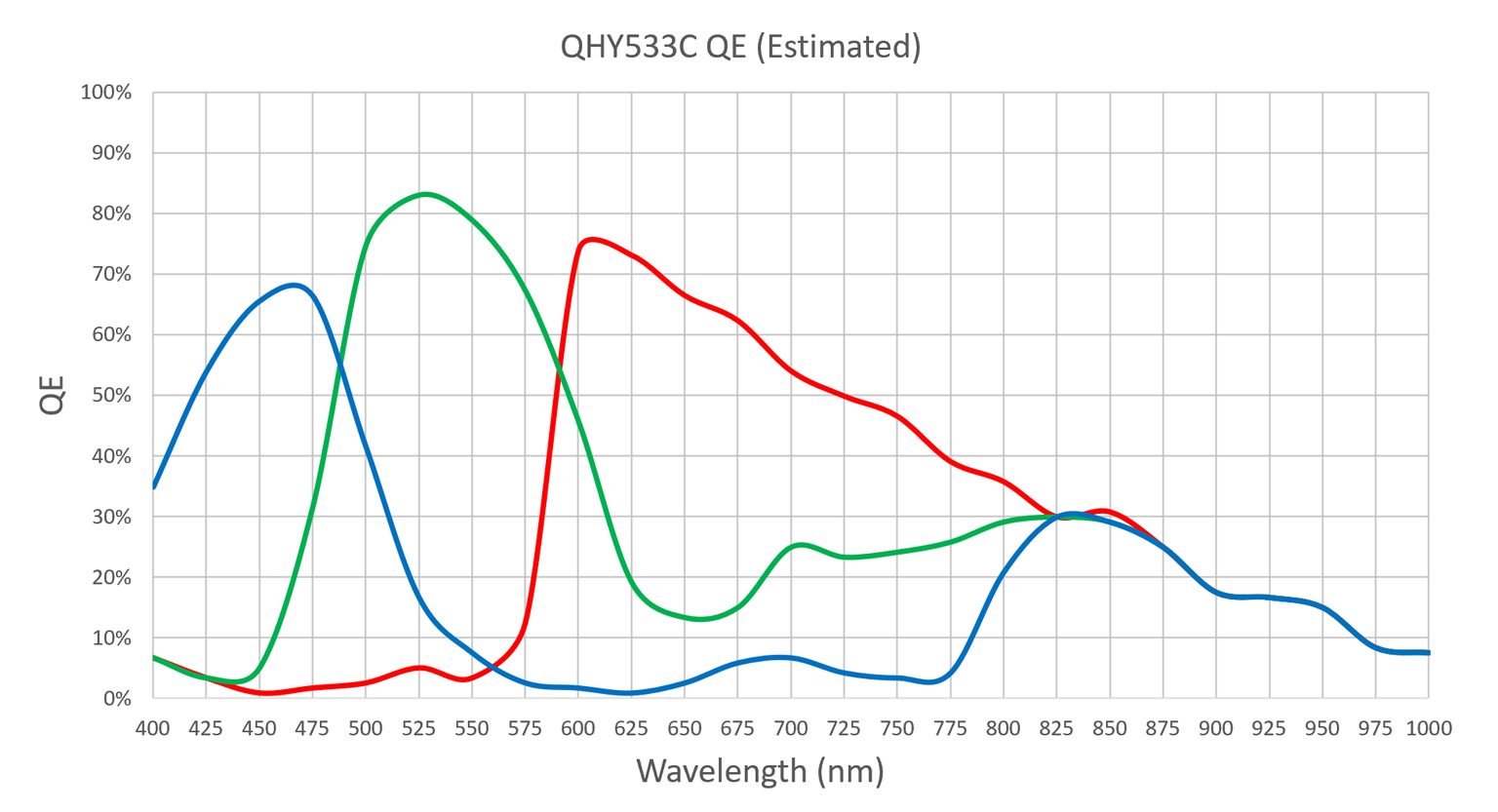 The two figures above show the relative curves of the quantum efficiency. On the left, those of the mono version and on the right, those of the color version (pre-release version).

The sensor characteristics of the Sony IMX 533 M/C

CMOS technology, which is characterized by low noise and high readout speeds, has revolutionized astronomical imaging technology in recent years. The QHY533M/C sets a new generation of back side illuminated sensors with a pixel size of 3.76 x 3.76 µm, which belong to the same family of sensor technology as the much more expensive QHY600 and QHY268 models. They feature non-existent amplifier glow, very low dark current and readout noise while maintaining extremely high sensitivity. The IMX 533 a 9 megapixel CMOS image sensor with 15.97 mm diagonal (11.3 mm square) and 3003 x 3003 pixels, which are read out with 14 bit data depth via the AD converter and is available in both monochrome and color versions.

The Back Site Illumination (BSI) technology

In CMOS sensor technology there are so called FSI (Frontside Illumination) and BSI (Backside Illumination) sensors. Please also read the following article. The former are relatively inexpensive to produce, but they have the disadvantage of being less sensitive than BSI sensors, which have a much higher quantum efficiency and are therefore much more expensive to produce. Only recently has Sony succeeded in producing sensors with very small pixel sizes using BSI technology.

Techtalk: One advantage of the BSI structure is a significant increase in the so-called full-well capacity, which basically indicates how many photons a pixel can absorb before it is saturated (i.e. overexposed). Simply put, in the individual pixels of BSI sensors, the incident photons are more effectively converted into electrons, this is called quantum efficiency. The higher, the more sensitive and resulting quantum efficiency. The IMX 533 mono sensor achieves a QE of over 90% at 450 nanometers, which means that almost EVERY incident photon also generates an electric charge. The IMX 533 is - no matter how long you expose - completely free from the effect of amplifier glow.

Simply speaking, you can achieve image results with shorter exposure times that are not possible with FSI sensors. However, due to the non-existent amplifier glow, you can expose as long as you want even for very low-light objects, for a single image up to one hour.

The QHY533 has a large DDR3 image memory of 1 gigbyte for reliable image transfer at high rates via the USB 3.0 interface. In addition, the large memory capacity also allows secure data download without losing images when the camera is operated on a less powerful control computer. With 8-bit AD conversion, the camera delivers 27 full frames per second and still 18 bits with 14-bit conversion.

With the available ROI function (Region of Interest), where you can read out arbitrary, smaller image sections, the image download at 14 bit becomes even faster, so that the camera can also be used for "lucky imaging" in the field of solar, lunar and planetary photography.

Some consumer digital cameras can save images in raw format (RAW) in addition to compressed image files, but these are usually not really the absolutely unprocessed raw data from the sensor. For example, hot pixels are removed or electronic filters are applied to reduce noise before the image is read out. This can lead to errors in astronomical images, since the cameras are actually designed for normal users.

However, QHY cameras offer TRUE RAW IMAGE OUTPUT and produce an image consisting of only the original signal, giving the user maximum flexibility for use astronomical imaging programs and other scientific imaging applications.

The camera features a 2-stage thermoelectric cooling system that cools the sensor down to 35 degrees Celsius below ambient temperature. Although CMOS sensors produce very little noise, the cooling reduces dark current noise even further, to 1/1000th of an electron at - 20 degrees sensor temperature.

Based on nearly 20 years of experience in developing cooled cameras, QHY has developed comprehensive anti-icing and dew control solutions. The optical entrance window has a built-in heater that prevents condensation while protecting the electronics inside the cameras from moisture. Icing of the inner chamber, where the image sensor is mounted, is prevented by a suitable desiccant

The Color (left) and the Monochrome (right) versions of the QHY 533 are delivered with different mechanical interfaces. However, both versions have an additional adapter, with which the camera can be mounted "piggyback" on a telescope, for example with telephoto lenses. Here we recommend the ( Baader Stronghold Tangent Assembly (various versions available) ), which can be aligned exactly to the main telescope.

The color camera comes with a free adapter E1, which together with a Nikon or Canon bayonet adapter (extra charge) guarantees the backfocus of 55 mm required for telephoto lenses. For direct telescope connection via standard T2, the housing has an M48 female thread. Additionally, there is a C-mount female thread for direct connection of C-mount lenses. 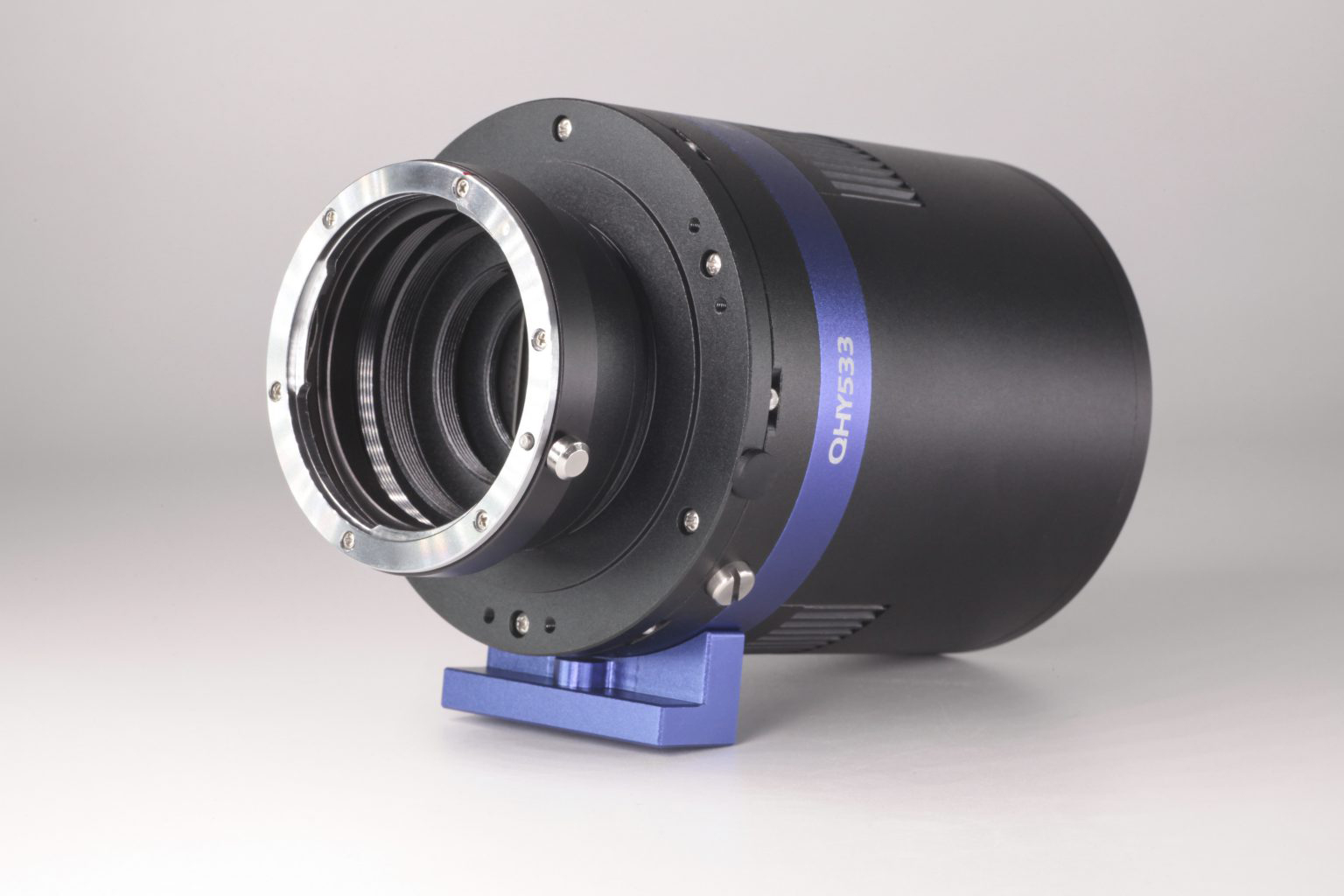 The new QHY Adapter Kit E1 for QHY533C / 294C / 163C / 183C / 174C (#1932743 , € 50,- ) allows direct connection via an M48 thread and offers a backfocus of 55 mm. This is important when using reducers, field flatteners or other focal length changing optical elements on the telescope. Alternatively, a Nikon or Canon DSLR lens adapter can be connected (the camera adapters are available at extra cost).

The mono version has an internal thread with which a special version of our CFW3 filter wheel can be adapted. This filter wheel will be available together with the QHY 533 series from the end of April. Due to the short backfocus design of both components, a Canon or Nikon telephoto lens can also be connected here at 55 mm backfocus.

Of course, further adapter solutions are available and  QHY Off-Axis Guider (OAG) (various versions available) are also available. A selection is shown in the following figure. 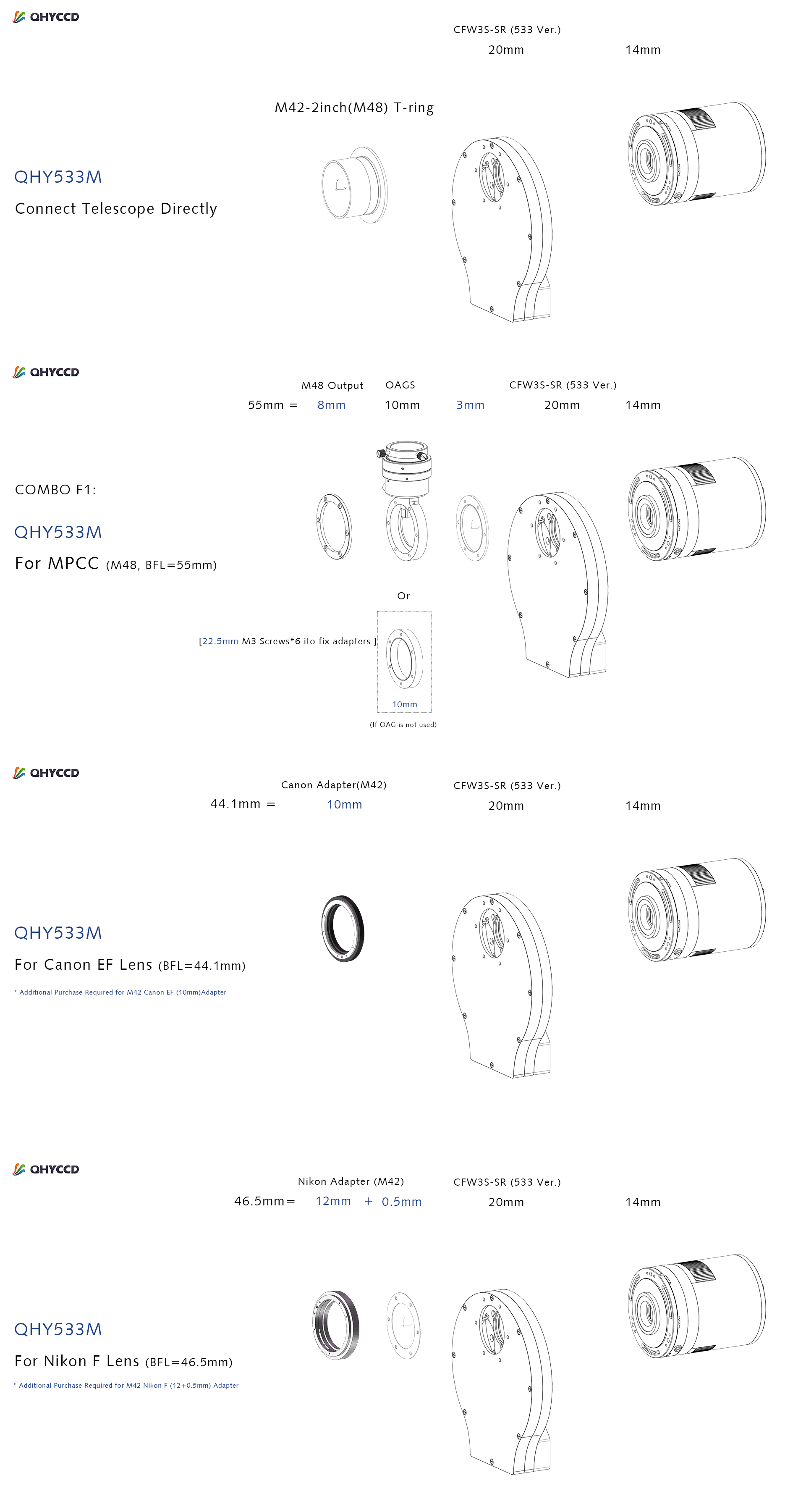 The following two figures show the mechanical dimensions of the QHY 533 M/C. The 533 C on the left and the 533 M on the right. 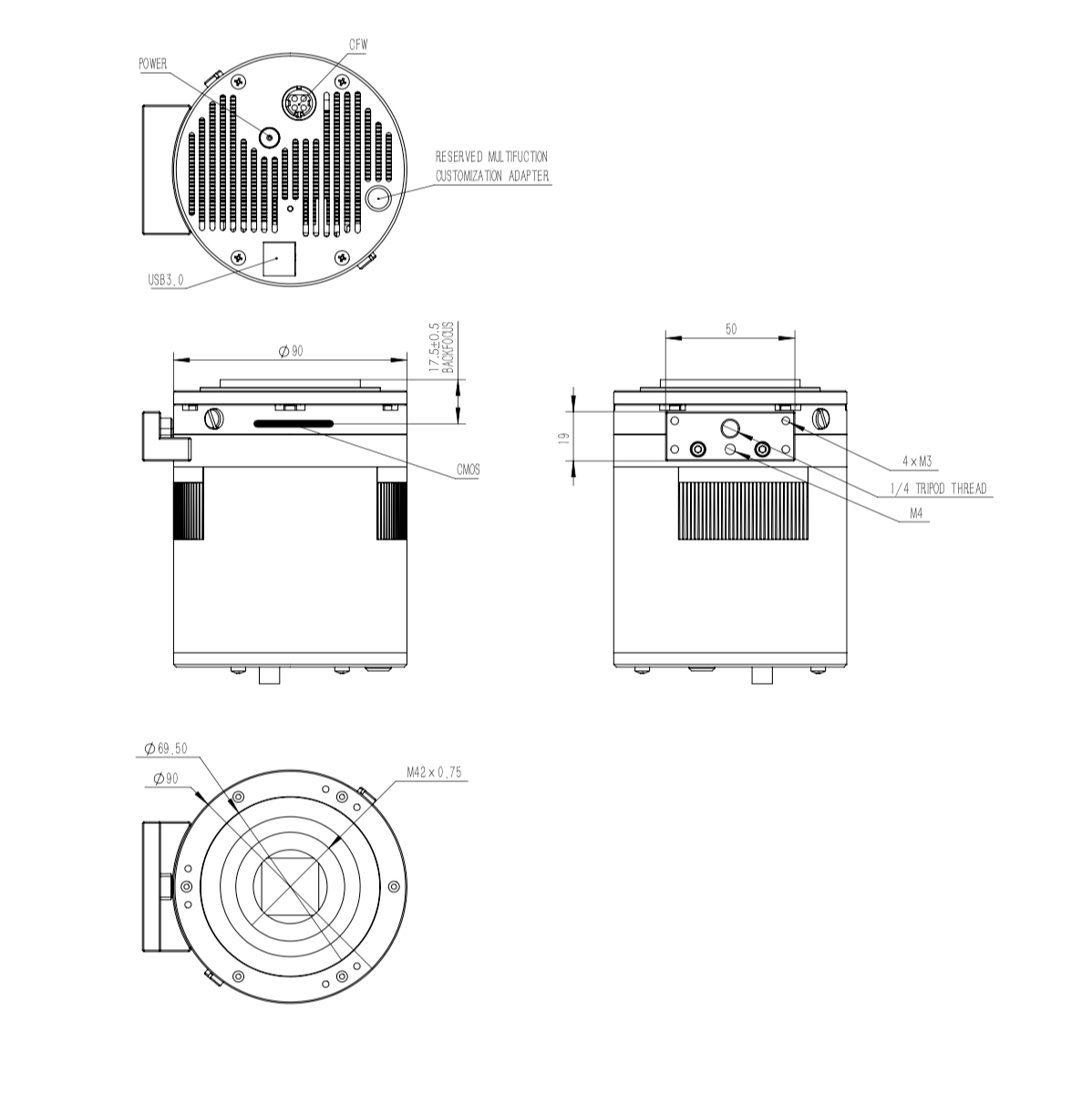 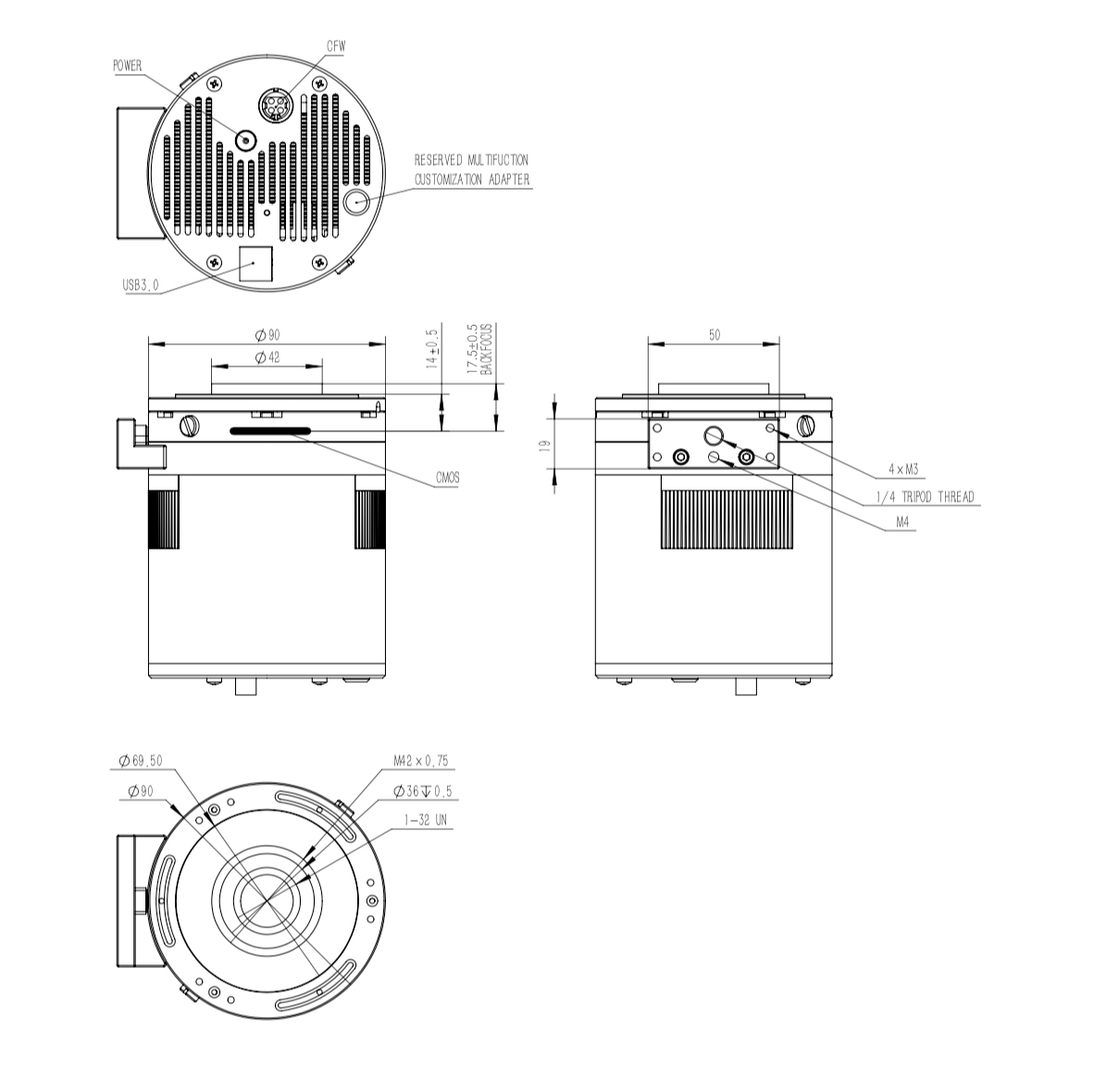 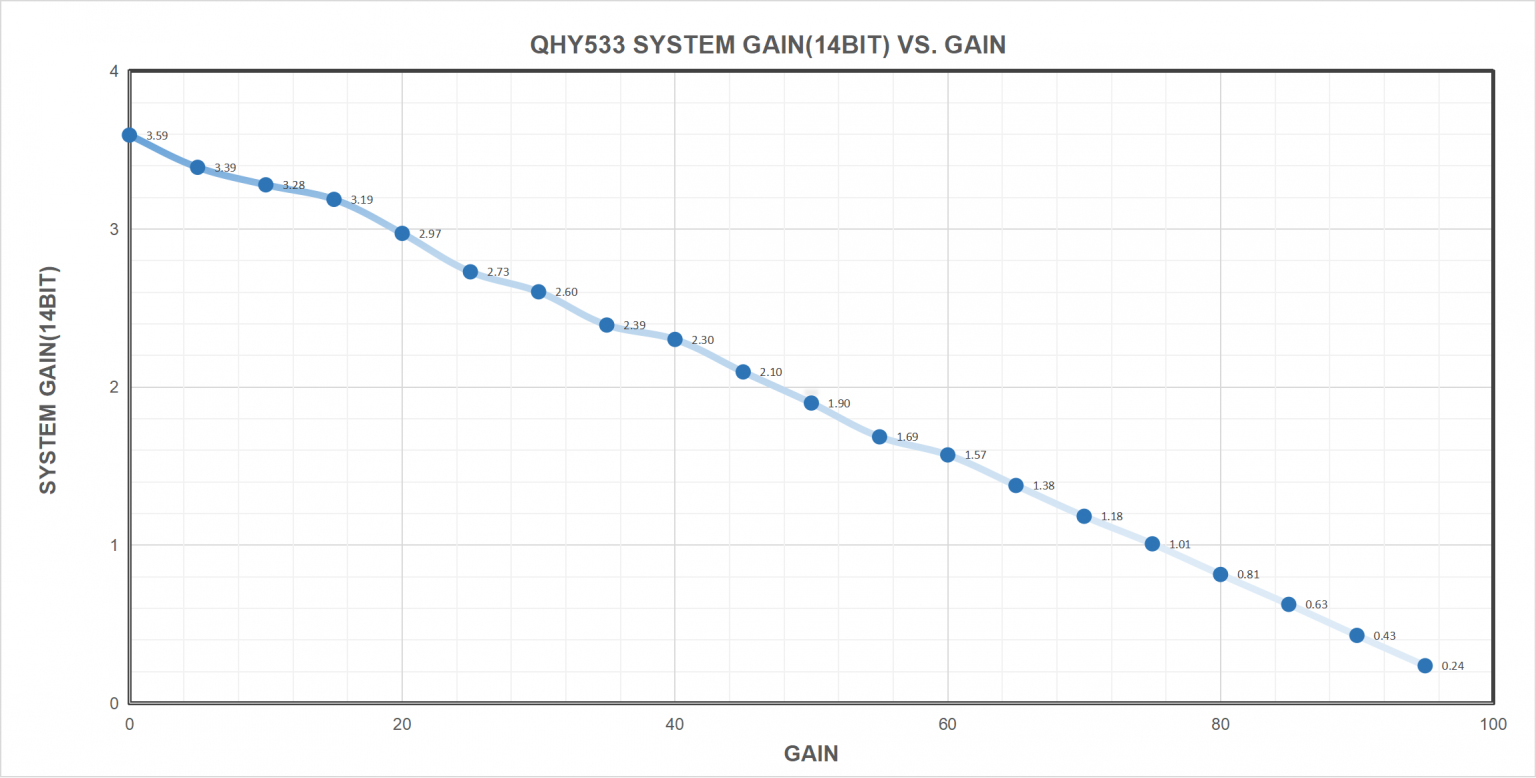 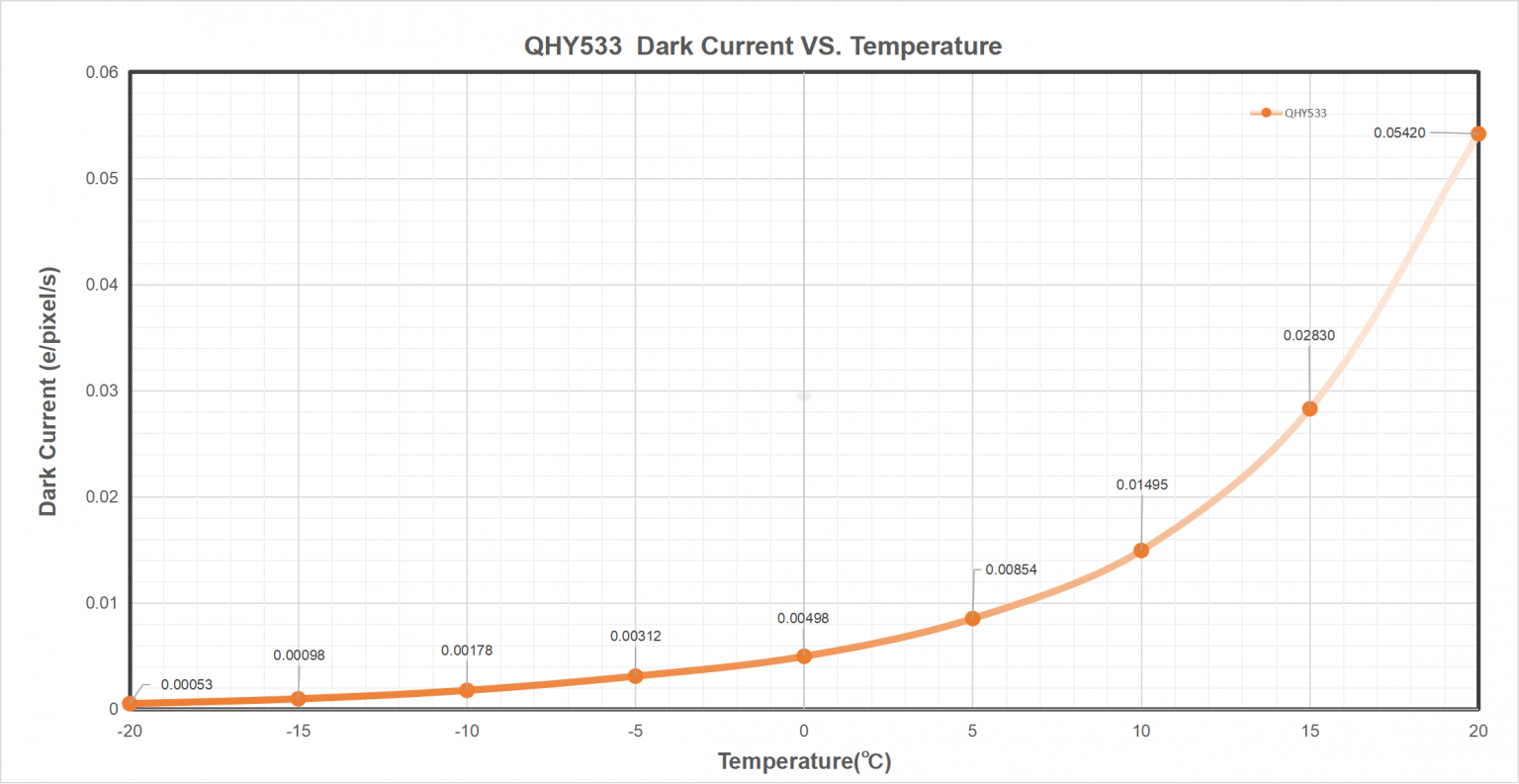 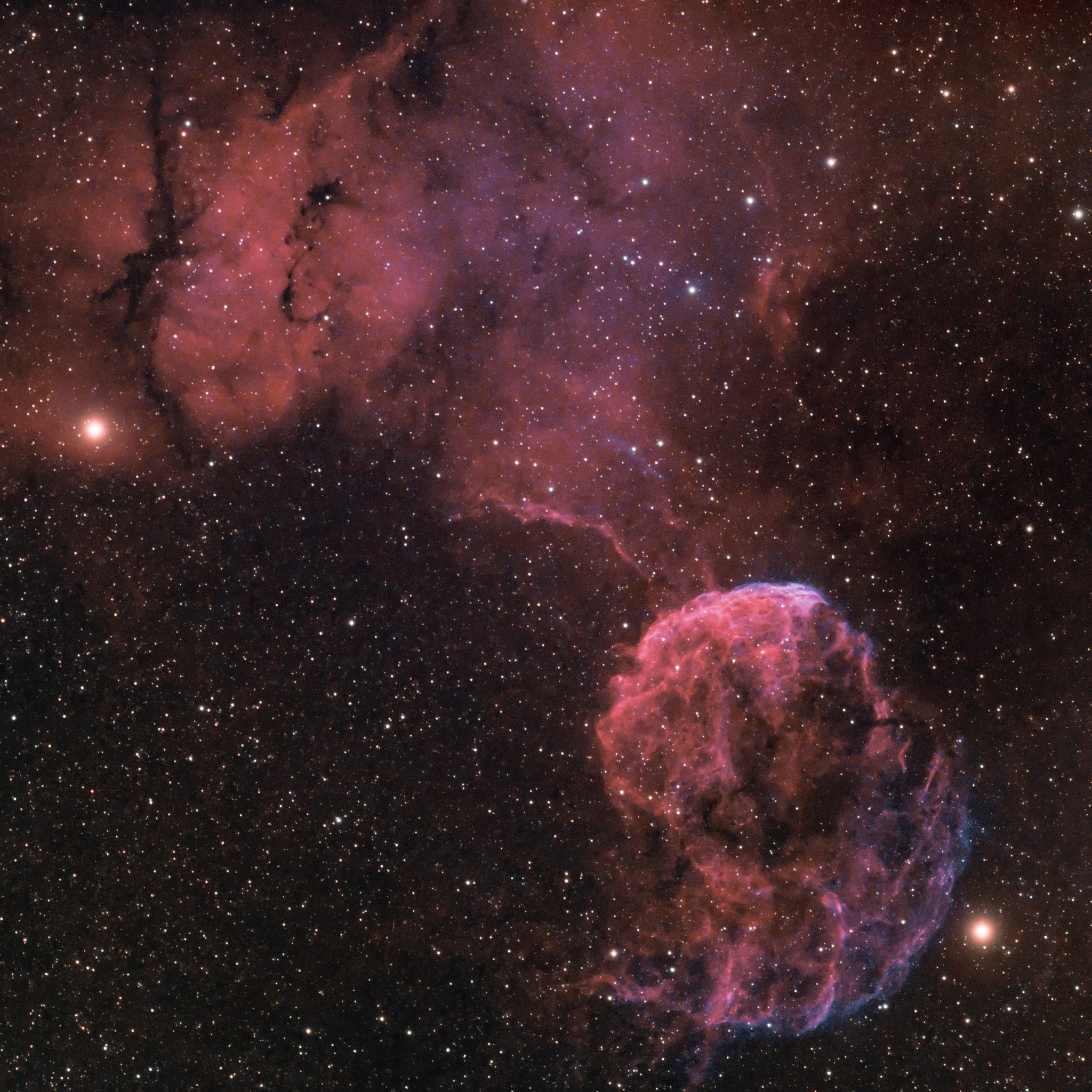