I have this VIP Barlow, along with all the Morpheus eyepieces. I would like to configure this Barlow so that I get 1.2x magnification, or as close to that as possible. As it comes out of the box, the lowest magnification with the Morpheus is 1.53x.

Baader has a lot of parts in their catalog, too many for a novice like me to sort through - is there anything I can acquire to convert or make the VIP element a 1.2x Barlow?

4
According to our optical calculation, the VIP-Barlow would show considerable amount of field curvature if used below 1.5x.
For this reason we have not designed mechanical parts nor considered ways to go below that value.

You must be logged in to answer questions.
I understand that the optically active element of the VIP-Barlow is the 2.6x glass-path-corrector lens referenced "4C" in the T2 system. Is that correct ? If not, Is the active element for sale alone ?

4
Thanks for this question, to make it short: it is not correct. We did repeat it many times but somehow it is not getting noticed - the 2.6x glasspath-corrector (# 2456317) is NOT a barlow lens.

The 2.6x glasspath-corrector is solely designed to provide the necessary backfocus for using binoviewers in conjunction with newtonian telescopes and refractor telescopes. For correcting for the huge amount of glass in our Mark V giant binoviewer (# 2456410) - and likewise in the newly designed Maxbright Mark II binoviewer that is still under preparation at this time.

Both lens elements of the Baader 2x VIP-Barlow (# 2406101) and the 2.6x glasspath-corrector (# 2456317) do look quite similar when inspecting them by eye only (they use the same housing) - and we are very sorry that through the years this is always again creating confusion in the forums. However - we always again reiterate that the two products are not the same lenses and cannot be used for serving a dual purpose.

In case you were ordering the 2.6x glasspath-corrector and would use this product as a 2x barlow lens, you would find out that it creates severe chromatic errors if used in this (wrong) mode. The same accounts if trying to use the 2x VIP-barlow-lens as glasspath-corrector in conjunction with a binoviewer - you would see color error and conclude that the lens were faulty.

We never said that these two products may be used for the other purpose, but always again people look at them and conclude they were the same - which definitely is not the case. Both products work excellent if used for their specific purpose. But since they repeatedly are being (ab)used in either/or configuration, some people concluded both designs were flawed. Again - this definitely is not the case.

Thanks for purchasing the VIP-Barlow if you want a barlow lens. We are sorry but the barlow-element alone is not available. If you intend to use a barlow element only that readily threads into regular 1 1/4" filter threads, we do recommend our Q-Barlow 2.25x Link (# 2956185).

You must be logged in to answer questions.
Hi: I purchased an Explore Scientific 82° 30 mm Eyepiece and am looking for a good Barlow. After doing a lot of research I discovered the VIP. I love how versatile it is! However, this eyepiece is a 2” behemoth (weighs a kilo), so I was wondering if the VIP is a good choice for this application? Thanks!

3
Unfortunately the VIP is not suitable for this eyepiece, we recommend to buy an 2" AstroPhysics convertible Barlow instead

You must be logged in to answer questions.
Hello: I just buy a baader vip Barlow. I have used it with 1,25” connection (in scope and camera). Results are perfect. Congrats for the product
I would like to use now in a 2” scope and in a reflex camera and I don’t know how to do it.
Is there any schematic to see the way to do it.
On the other hand, I would like to know the explanation about modules of the Barlow. On instructions included in the box, I don’t have in a clear way utilities of each module.
Thank you in advance for your help

1
To use the Barlow in a 2" focuser, you can use any 2"/1.25"-adapter like Baader 2" to 1¼" ClickLock Reducer (T-2 part #15B) # 2956214.
The magnification of the Barlow depends on the distance to camera sensor or field stop of the eyepiece. We have described it in the PDF https://www.baader-planetarium.com/en/downloads/dl/file/id/240/product/1062/calculating_different_magnifications_with_the_vip_barlow.pdf which you can also find in the download-section ot the product website.
A standard T-ring gives you a distance of 55mm with a classical DSLR. You can screw the Barlow directly or with the included 15mm T-2 extension onto the T-ring of your camera.

You must be logged in to answer questions.
I would like to use the vip modular barlow in 3x mode on a 120/1200:

Will the 3x image be degraded a lot?

Will an additional 64mm spacer be needed to reach 3x?

0
The Barlow works fine for magnification factors between 2x and 3x, so it shouldn't have problems with your eyepieces, too. For 3x magnification, you need another 64mm of T-2-extensions. If you don't want to use a VariLock to achieve the perfect distance, you can come quite close with removing one 15mm extension and adding two 40mm extensions, giving you a working distance of 129mm.

You must be logged in to answer questions.
Mine is not really a question, but I would like to offer my feedback regarding the configuration I use all the time for visual work:

Advantages of this configuration for visual use are:
(1) the change in focus position when the VIP is used or removed is minor. Also, adding spacers does not change the focus position much
(2) it is more solid, as the connection with the focuser is via 2"
(3) the barlow can be used with refractor diagonals in 2" without hitting the mirror or prism.

Thanks for making such a wonderful tool.

-1
Thank you very much for your very nice feedback! If you have some photos of the equipment and astrophotos that you took with the equipment - and you would allow us to publish it in our product page blog together with your feedback - please send it to support@baader-planetarium.de

You must be logged in to answer questions.
I am trying to figure out the magnification of the VIP Barlow when using with my Morpheus 17.5mm eyepiece. My scope is an 8" f/5.9 Dobsonian, 1200mm f/l/

-5
Here you find a pdf that explains how to calculate magnifications: https://www.baader-planetarium.com/en/downloads/dl/file/id/240/product/1062/calculating_different_magnifications_with_the_vip_barlow.pdf

You must be logged in to answer questions.
Is the VIP-Barlow indeed compatible with an 2'' Amici diagonal ? if yes, what is/are the model(s) do you suggest ?

-7
The VIP Barlow is compatible with any star diagonal, this includes amici prisms. But of course, by doubling the magnification, optical impurities of the optics become more obvious, and most amicis aren't made for magnifications beyond 60-100x.

Both are designed for astronomical use and high magnifications. With the T-2/90° prism, you can insert the barlow element into the housing of the prism as shown in the sketch in the description of the VIP-barlow, which saves you some opitical length for a short adaptation. Or you can use it in 1.25"-configuration. If you want to use it with a 2" eyepiece clamp, make sure that it doesn't hit the prism.

You must be logged in to answer questions.
Can this system be integrated into a M42 screw-system layout? Like male to camera, and female to SCT adapter 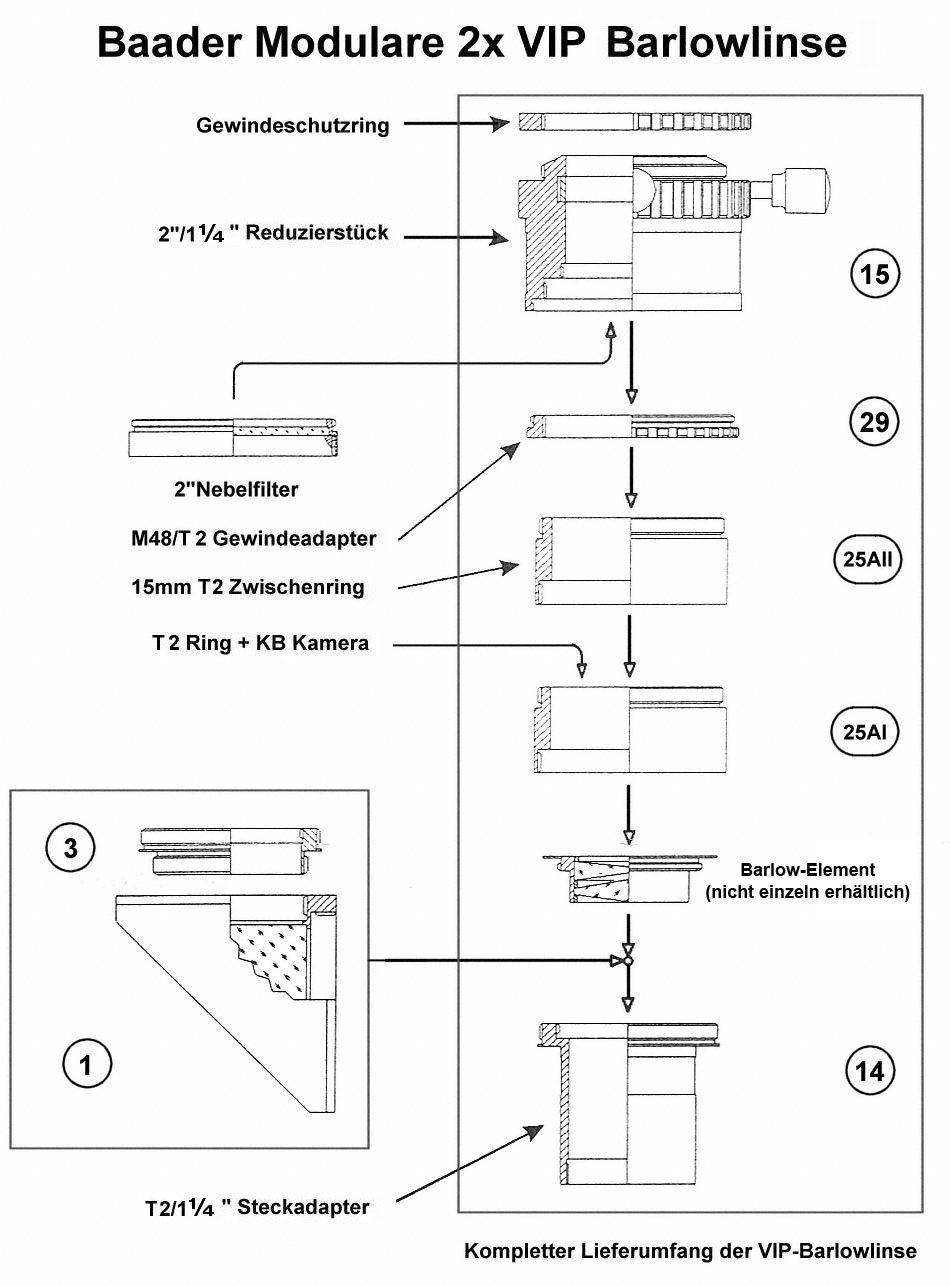 Modular Barlow with 1¼" and 2" barrel

High quality optics with apochromatic characteristics, for magnifications of 2x and above

Attention: This is a 2x barlow lens. It has nothing to do the 2.6x glass-path-corrector lens that we offer exclusively for binocular viewers

The Baader Barlow lenses at a glance

With currently five different barlow lenses in Baader Planetarium's product range, it is not easy to keep track of which model fulfils which function best.

... can be found on our detailed Blogpost: 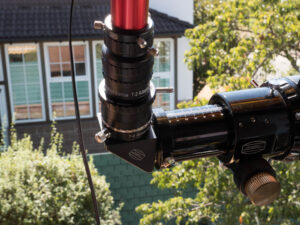 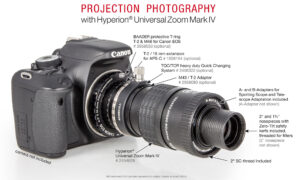 Baader Blogpost:
The camera at the eyepiece 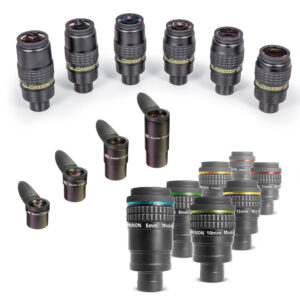