Shortwave infrared light (SWIR) is usually defined as light with a wavelength between 900- and 1700nm, occasionally also as the spectrum between 700- and 2500 nm. Since silicon sensors have an upper detection limit of about 1000nm, SWIR imaging requires specific optical and electronic components that can process the SWIR spectral range. For SWIR imaging, indium gallium arsenide (InGaAs) sensors are mainly used, which cover the typical SWIR spectrum but also detect wavelengths from 550 nm to 2500 nm. Line sensors based on InGaAs are freely available, but corresponding area sensors are usually ITAR-controlled (ITAR = International Traffic in Arms Regulations, internationale Rüstungskontrolle).

The quantum efficiency of QHY SWIR cameras versus wavelength

Both the QHY990 and QHY991 have an integrated 25 mm filter holder, a filter size commonly used in laboratory applications. The SWIR filter is easily installed in the camera and with this adapter the camera retains a standard C-mount flange focal length of 17.5 millimetres. 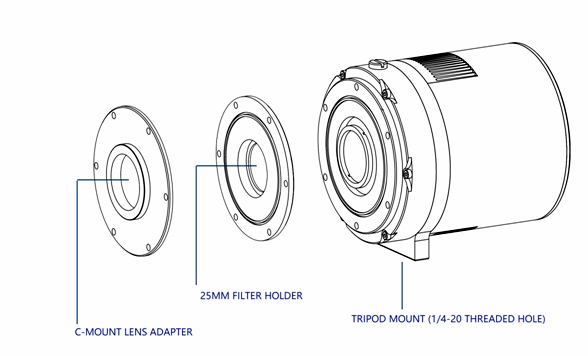 The dark current over the cooling capacity of both camera models

The new QHY SWIR cameras use Sony's original SenSWIR technology, in which the photodiodes are formed on an indium gallium arsenide (InGaAs) compound semiconductor layer and connected via a so-called Cu-Cu junction to the silicon (Si) layer that forms the readout electronics. This is a technology that enables high sensitivity over a wide range of wavelengths. This breakthrough results in a SWIR image sensor that is compact yet allows seamless image capture over a wide range of wavelengths, from visible to invisible short-wave infrared (wavelength: 0.4μm to 1.7μm). The use of these sensors enables the detection of wavelengths that are invisible to the human eye (approximately from 800 nm), which enables a wide range of applications.

The production of conventional SWIR image sensors is problematic because there are many technical issues to be solved, including further miniaturisation of pixels, increasing the number of pixels, as well as facing various other problems, such as low quantum effectiveness in the visible spectral range and the usual analogue image output.

The new sensors from Sony use a so-called stacking technology with Cu-Cu connection instead of the otherwise usual "bump connection", which Sony has been further developing for years. Cu-Cu technology offers high image quality, a more compact sensor size thanks to miniaturisation, and high sensitivity in a wide range of wavelengths covering both the visible and invisible spectrum. Cu-Cu technology also supports digital image output, which is required in industrial applications today.

When connecting the InGaAs layer that forms the light-receiving photodiodes and the Si layer that contains the readout electronics, a certain distance between the connections must be maintained with conventional "bump connection" technology, making it difficult to achieve a smaller pixel size with current industrial CMOS sensors. This made further miniaturisation a serious challenge. However, Sony's new products feature a smaller pixel pitch made possible by the Cu-Cu interconnect, achieving the industry's smallest pixel size of 5 μm. This in turn enables a reduction in camera size while maintaining SXGA (IMX990) or VGA (IMX991. By using Cu-Cu interconnect technology, the sensor has very low FPN noise and pixel defects. Fixed Pattern Noise (FPN)

is a special noise pattern of image sensors that becomes visible at longer exposure times. This spatially determined noise is caused by the different response of the individual pixels to the same illumination intensity.

Image acquisition in both the visible and invisible infrared spectral range.

Sony's SWIR image sensor technology is used to make the upper InP layer, which absorbs visible light, thinner (see also figure Cu-Cu junction above) so that light can be transmitted to the underlying InGaAs layer, enabling high quantum efficiency even in the visible spectral range. Only this technique enables imaging in a broad wavelength range from 400 nm to 1700 nm, allowing the use of a single camera instead of the traditional multiple cameras that were required to capture visible light and near infrared.

SWIR applications in Industry and Astronomy

SWIR imaging is used for a wide range of applications, such as industrial inspection of circuit boards, solar cells and foodstuffs, and also, for example, to detect forgeries of old paintings. You can find more impressive image examples, for example, on this(https://www.edmundoptics.de/knowledge-center/application-notes/imaging/what-is-swir/)

Information about the surface and the inside of an apple are obtained simultaneously. Left: visible light; Right: short-wave infrared.

In the infrared spectral range, among others, the methane band is at a wavelength of 880 nanometers. Due to the high quantum efficiency of the sensor, together with the Baader Methane-Filter 1¼" (889nm, 8nm) (#2458295 , € 239) , spectacular images of the outer gaseous planets can now be taken with moderate telescope apertures. 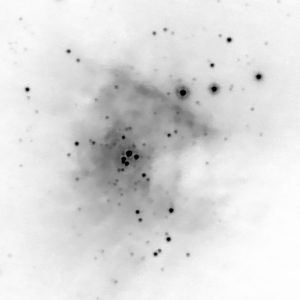 Another example of the possibilities offered by the QHY990/991 is the image of Messier 17, the Omega Nebula. In this example a monochrome image taken in the continuum was combined with an image in the NIR range (800 - 1000nm). The continuum image was coded green and the NIR image was coded red. 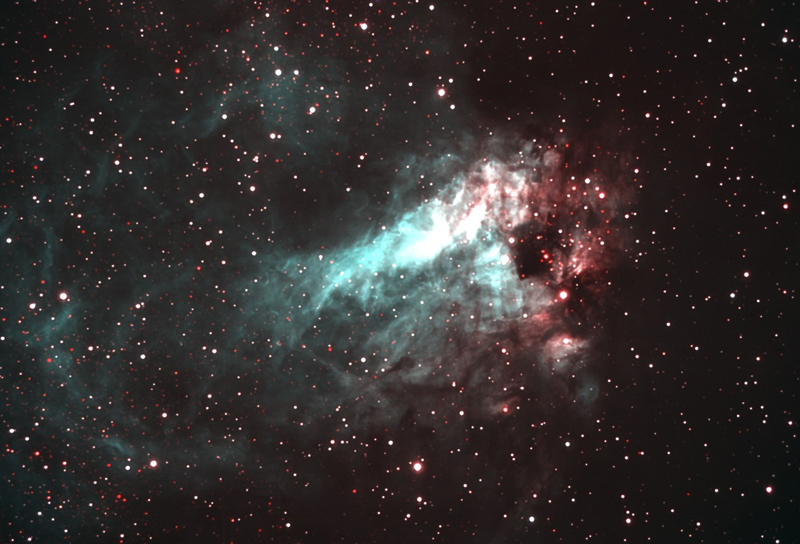 The technical data of the two QHY SWIR cameras in comparison

Further detailed information can be found on the QHYCCD webpage