QHY PoleMaster - a MUST for every amateur who works portable - "Scheinern" and the polar finder scope were yesterday.

The QHY PoleMaster is an easy to use, electronic device that allows to align the right ascension axis (RA) of a transportable, parallactic German mount to the true celestial pole - and thus parallel to the rotation axis of the Earth - within a very short time. This pole alignment is essential for visual observers, when observing objects via GoTo control or via setting circles, for astrophotographers even more, because with inaccurate pole alignment and even correct guiding, the stars show arcs outside the center of the image. The QHY PoleMaster is protected by Chinese and US patents and internationally by the PCT agreement.

As every "transportable" amateur astronomer knows from his own experience, a perfect pole alignment without tools costs valuable observing time. With the QHY PoleMaster, perfect polar alignment can be achieved in 2-3 minutes with an accuracy of up to 30 arc seconds. The pixel resolution of the sensor together with the objective is about 30 arc seconds and a large field of view of the imaging optics of 8 x 11 degrees. This means that you only have to align your mount very roughly to the true celestial pole at the beginning (compass and digital spirit level) and of course the PoleMaster can be used on the northern (Pole Star) as well as on the southern sky (star group around Sigma Octantis). So that the PoleMaster can be used on as many different mounts as possible, QHY supplies suitable mechanical adapters for almost all common mounts:  QHY PoleMaster Adapters (various versions available) .

And this is how the PoleMaster works 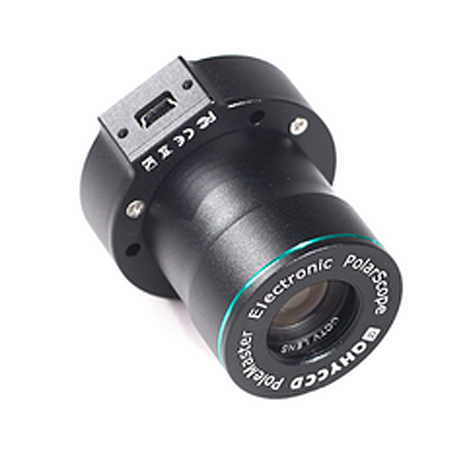 It contains a high-sensitivity CMOS camera that dynamically captures star fields near the celestial poles in real time. Its sensitivity is higher than that of the naked eye, so you can see not only Polaris (northern sky), but also some faint stars near Polaris. Based on the position of these stars, the Pole Master Calibration software calculates the true position of the North Pole. At the same time, the PoleMaster determines the position of the pivot point of the right ascension axis and then marks the position of the two points on a screen. All you have to do is adjust the azimuth and pole elevation so that the two marked points match.

The PoleMaster consists of two parts. One is the camera unit and the other is a mechanical adapter that holds the camera unit, and attaches to the RA axis of your mount.

If your mount is missing, please contact us. We will do our best to help you. 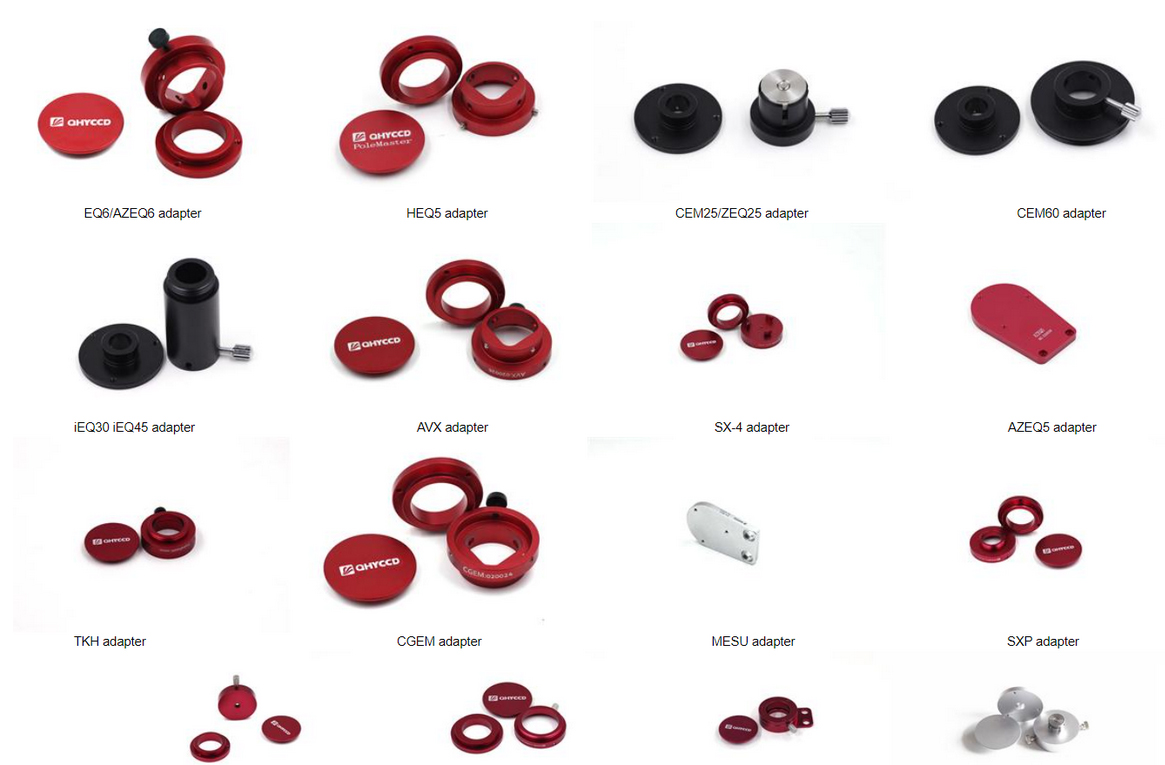 A detailed description of the mechanical adaptation, as well as the PoleMaster software can be found on the original website of QHY.

Only the really "old hands" of amateur astronomers still know what "Scheinern" or "Einscheinern" means. We wrote a blog post about it a long time ago that gets pulled up every now and then, describing exactly what polar alignment of a parallactic mount is really all about. You can read the german blog post here: "Adjusting" parallactic mounts according to the classical method of Julius Scheiner (1858 - 1913).

Before the PoleMaster, it was so-called pole finder telescopes that helped the amateur align the RA axis with the celestial pole (parallel to the Earth's axis of rotation). In these mounts the RA axis is hollow drilled (of course also a part of the declination axis) and at the end of the RA axis the polar finder scope was screwed in (the hollow drilling of the axes reduces of course the mechanical stiffness of the axes and thus of the whole mount).

To be able to use the polar finder scope, the mount needed setting circles for date and time, because both the pole star and the star group around Sigma Oktantis (southern sky) describe a circle around the respective true celestial pole in the course of the night. In the polar finder scope there was a crosshair plate with the corresponding star positions. Due to the small axis diameters, the objectives usually had apertures around 20mm at 6x magnification; this was of course sufficient for the pole star but a pole alignment at the south pole was a real challenge due to the low brightness of the stars. In addition, the polar finder scopes had to be mechanically adjusted rotationally symmetric to the RA axis. Also not an easy thing. 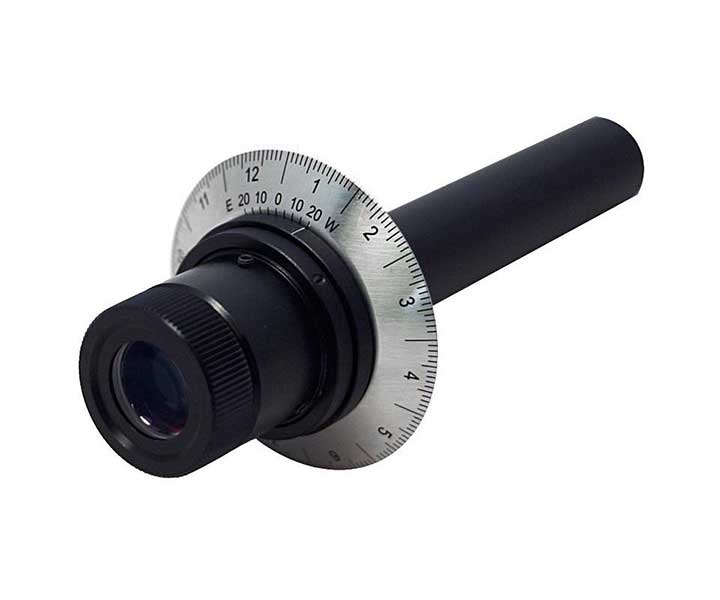 And who invented the polar finder scope ?

At the end of the 1970s, the Japanes company Vixen introduced a mount called "New Polaris", the world's first mount with a polar finder scope. It was a stable, mechanically well designed small mount with a RA motor and a simple electronic control. Together with the wooden tripod it carried about 5 kg instrument load and was a sensation at that time. The author bought one for about 700 DM - a lot of money at that time - and was thrilled (and still has it in the storage room).

Later the legendary Vixen mounts of the type SP/GP and SPDX followed, the DX and the GPDX even together with one of the first GoTo controllers, the SkySensor 2000. The success was enormous and many companies produced clones of the Vixen mounts and of course took over the success story of the Posucher telescope.

Why do we describe the story in such detail? Of course to convince you of the advantages of the QHY PoleMaster. You can comfortably stand or sit upright, because when using the PoleMaster you do not have to ...