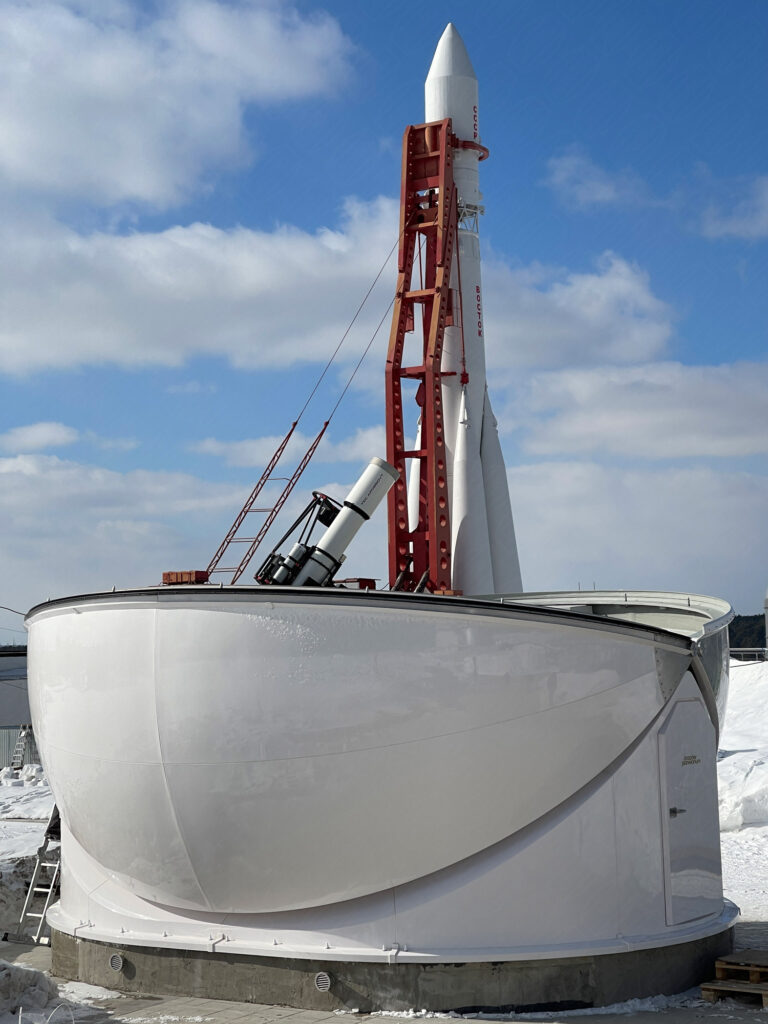 In spring 2021 we could finally – due to meanwhile somewhat less strict Corona rules – install a turn-key observatory (consisting of a 6.5 meter AllSky dome as well as the instruments mentioned below) at the Tsiolkovsky State Museum of Cosmonautics in Kaluga, Russia. The museum was opened in 1967 and now offers visitors the opportunity to make real astronomical observations. During the day the sun can be observed and photographed in white light or H-alpha, and during late night shows the moon, planets, bright nebulae, star clusters and the like can also be observed.

The observatory assembly was divided into two trips about 1 month apart. First, the dome itself was assembled, which presented some challenges to the dome team, as about 2 meters of snow had to be cleared first, and more unexpected rework was in store for them. But all problems were quickly mastered and the dome could be mounted according to plan.

The second team later installed the instruments and other electronics.

Also the assembly of this astronomical top equipment as well as later the adjustment and the alignment of the mount was an art for itself, thanks to the external circumstances. On the first evening the temperature was still "only" -20° C, on the second evening even -34°C! But everything worked despite cold fingers, the ColdTemp-optimized GM4000 HPS mount easily defied these low temperatures and our contact persons on site were very satisfied and impressed by the professional work of our whole team.

The observatory has been in regular operation since the end of May 2021. A short official customer feedback will be added here soon.

Read here the official news about the start of operation of the 6.5 M AllSky turn-key observatory (in Russian language – please use Google Translate or similar)