I have a Celestron Evolution 9.25 with Baader 2" BBHS ® Mirror Diagonal with 2" ClickLock Clamp. Removing the Diagonal is not easy because I have to remove first the ClickLock Clamp, due to the focuser knob position. What is the recomended acessories to use MaxBright® II Binoviewer with my Celestron?
Thanks

2
Best solution for this problem is using this adapter screwed on the Bino:
https://www.baader-planetarium.com/en/baader-2%22--t-2-nose-piece-and-camera-adapter-(same-as-used-by-sbig)-(t-2-part-16).html
Then you can let the BBHS onto the tube, also you´re able to mount a glaspathcorrector like this for example:
https://www.baader-planetarium.com/en/glaspathcorrector-1-25x-for-baader-binoviewer-with-t-2-thread-(maxbright-ii-and-maxbright).html
Please take a look to the description for this corrector about the reasons why it should be used.

You must be logged in to answer questions.
Do I need any additional accessory, that is not included in "MaxBright II Binoviewer with case", to use it with the Stellarvue 90 f7 Raptor Triplet Refractor? Thanks
1
The MaxBright II has two front-connection options:
1. A female T-2 thread to adapt onto most common photographic equipment
2. A Zeiss ring-dovetail as it has been established by Carl Zeiss for more than 50 years.

We will soon publish an extensive manual that shows the multitude of accessories that we recommend to combine with the MB II in order to adapt this onto most every telescope with the shortest possible optical length.

We cannot equip the MB II with the star diagonal that you certainly would need with your refractor in order to have a convenient way of looking through the telescope, because all users of Newtonian telescopes could not make use of this star diagonal. Accordingly it will be a matter of the customer or the dealer to help finding the appropriate adapters or star diagonals for the telescope in question and most of all, to enable this adaptation without wasting precious backfocus. This is the reason why we have developed a multitude of T-2 prism star diagonals with T-2 threads on both sides. Because you could choose for your refractor whether you want to use a 2" nosepiece to put it in front of the star diagonal or whether you opt for a 1.25" nosepiece.

So please have a bit more patience until we publish the MB II manual and check our website for star diagonals. Because furthermore we are preparing an extensive document to explain all the differences and benefits of our various star diagonals in exhausted detail, this will also be published within the next month.
0

You must be logged in to answer questions.
Please could you tell me what would i need (if i need anything) to make it work on a televue 76 mm refractor ?
1
You need:
- the backfocus length of your telescope
- a 2" or 1.25" nosepiece, if you can't use the T-2-thread of binoviewer to connect it to your equipment
- maybe a star diagonal - we recommend our T-2-prisms because they allow for a very short adaptation and save valuable backfocus
- probably a glasspat corrector to reach focus - we recommend the 1.25x, as it also removes colour fringes at faster telescopes.

You need to determine the backfocus of your telescope either from the back of the 1.25" or 2" eyepiece clamp or a T-2-thread, if available. You can do this e.g. by pointing the telescope with fully retracted focuser at the moon. Hold a piece of paper behind it and measure the distance at which you can see a sharp image of the moon - that's the available backfocus. Attach all necessary accessories to the telescope when determining the back focus.

If you intend to use it with a star diagonal, you have to include this, too. The available backfocus must be longer than that of the binoviewer with all accessories.

So, if you choose the 2.6x corrector, you only need about 28mm of backfocus, but the magnification increases by factor 2.6. We always recommend at least the glasspath corrector 1.25x, because they also remove the colour fringes which are introduced by the prisms inside of the binoviewer at fast telescopes (faster than ca. f/10).

You must be logged in to answer questions.
What is the lightpath length of this binoviewer?
0
The value of 110 mm +/- ca. 1mm (same as in the Mark V) was measured on a refractor. The small error margin of the measurement is caused mainly because of the diopter adjustment. Because of the not-standardized position of the field stop in eyepieces, it is always a good idea to plan with a security margin of some more millimeters.
2

You must be logged in to answer questions.
Is the Alan Gee mark II with a diagonal applicable to the MB II if only the back focus is enough?
-1
Yes it is. This will be the same as with the Großfeld-Bino.
1

The MaxBright® II Binoviewer incorporates the knowledge aquired during thirty years of building astronomical binoviewers. It is superior to cheaper models in many details.

In combination with a lens telescope or a Schmidt-Cassegrain we recommend the Baader T-2 Stardiagonal (Zeiss) Prism with BBHS ® coating (T-2 part #01B) (#2456095, € 215,-) or the Baader FlipMirror II Star Diagonal (#2458055, € 195,-) , to achieve a compact telescope adaptation. In addition, you can then choose a matching Glasspathcorrector

To select the right Glasspathcorrector, you need to know the backfocus of your telescope. You can read how to do this in the Manual of the Maxbright® II Binoviewer (coming soon).

You don't necessarily need a Glasspathcorrector for Schmidt-Cassegrains with f/10. Especially for lower magnifications and thus larger fields vof view, the Alan Gee Telecompressor Mark II (T-2 part #20) (#2454400, € 245,-) is more interesting: It shortens the focal ratio to ca. f/5,9, which gives you a brighter image and a larger field of view. So, a C8 almost becomes a rich-field telescope – for comfortable observations with both eyes open! 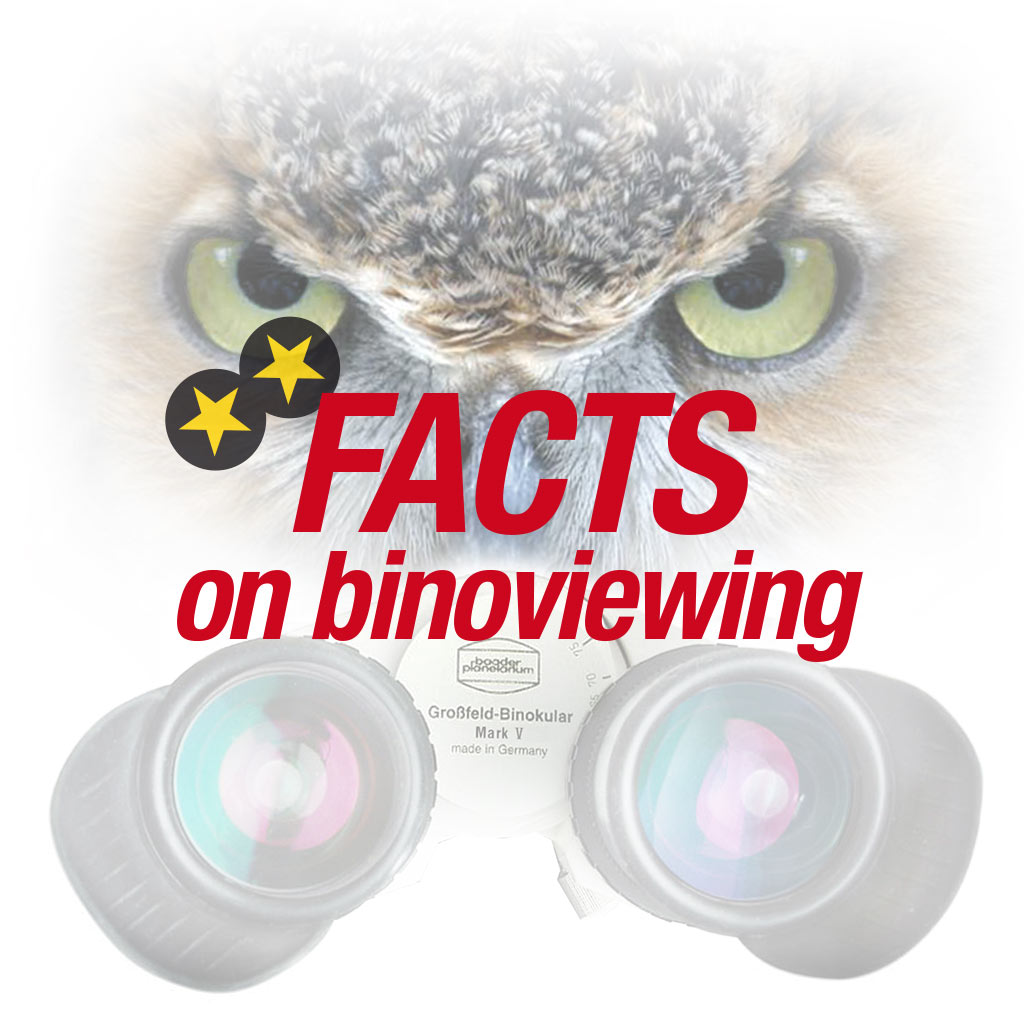 Baader Planetarium has more than 30 years of experience in building binoviewers. Therefore we do not offer simple modified microscope binoviewers without further accessories, but complete system solutions.

With monocular vision, your brain can only use a fraction of its "computing capacity". In fact, there is a kind of "emergency mode" in the brain so that even image information obtained with one eye can be distributed to both halves of the brain, but the brain has no way of correctly interpreting the "image errors" and above all the "nerve noise" that inevitably occurs during energy transport - just like with a CCD image!

Just as the user of a CCD camera or webcam superimposes several images in the computer, i.e. "stacks" images, the brain can also superimpose the different information from both eyes during binocular vision and in this way - each time in milliseconds - eliminate the imperfections that are not part of the real image.

So it is no wonder that after observing with one eye for a few minutes, you will have to take a rest that your brain demands because it is simply overloaded by the extremely concentrated viewing. In binocular vision, this problem does not exist! You can look as long as you want and remain relaxed. Even with severely impaired vision in one eye, the reduced tension results in an enormous gain in observation quality.

One often hears the criticism that using a binoviewer would split the light into two visual channels and that only 50% of the light intensity reaches each eye. This argument prevents many people from trying out for themselves what a revolutionary effect binocular vision has. But what is forgotten is that 50% of the light reaches each eye and that the energy from both eyes is "reunited in the brain" (more precisely, in the back of the head).

What you then see is by no means 50% darker than it is claimed. The real gain is only visible for someone who has tried it out for himself and has familiarized himself with this kind of seeing for a few minutes. Ultimately, the object doesn't look darker, but becomes visible effortless, more detailed and - more beautiful.