You must be logged in to answer questions.
Which Eyepiece Projection Adapters are compatible with Celestron Schmidt Cassegrain Telesopes.

If possible, we'd recommend OPFA-2 (easier handling, sturdier than a 1.25" eyepiece clamp) or OPFA-3 (the sturdiest version, holds even heavy cameras safe, but has to be screwed onto the telescope). OPFA-1 and OPFA-2 should only be used with good eyepiece clamps which have a sturdy clamping ring instead of only one simple clamping screw pressing onto the eyepiece/OPFA. 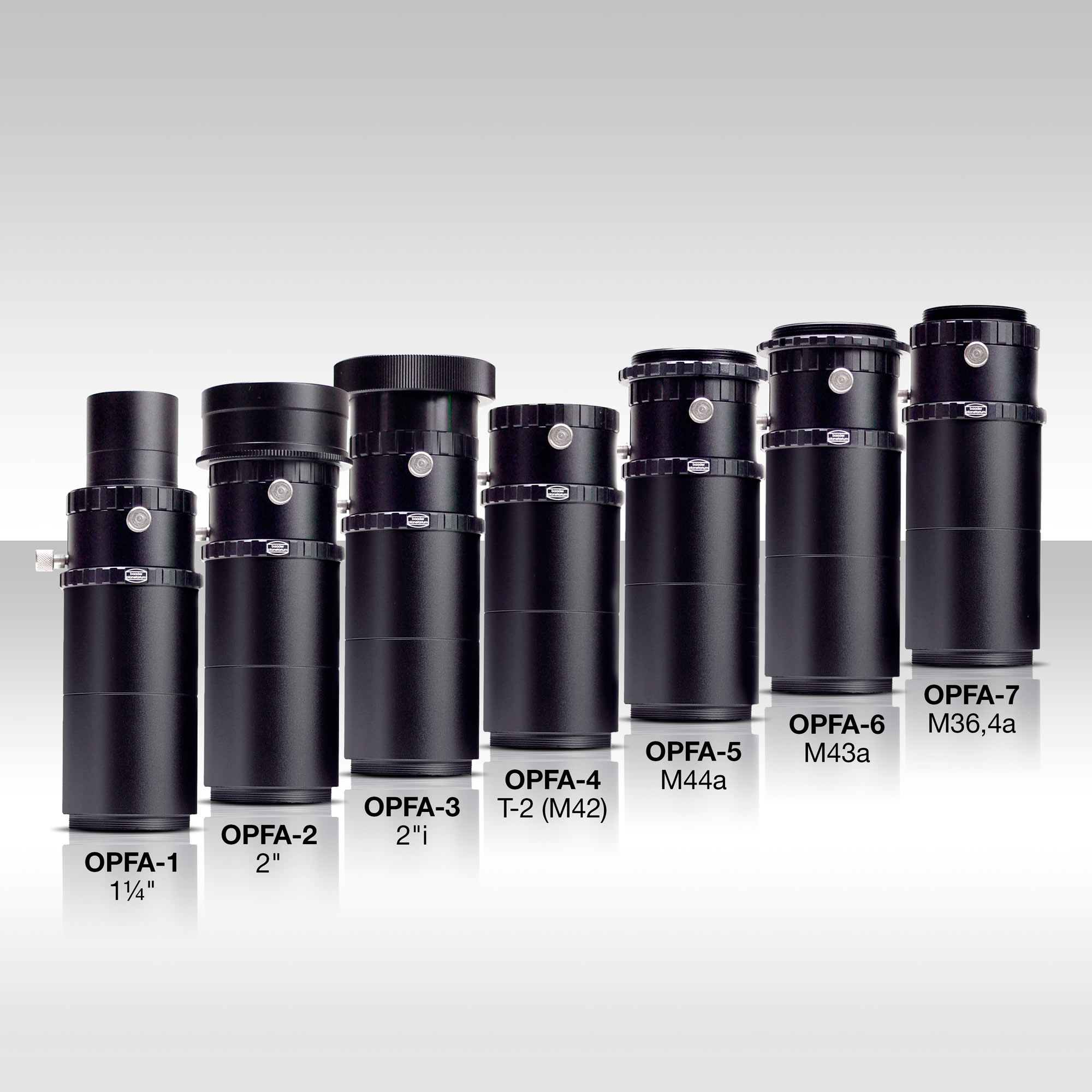 The OPFA is available with adapters for most telescopes, including sturdy thread-connections. 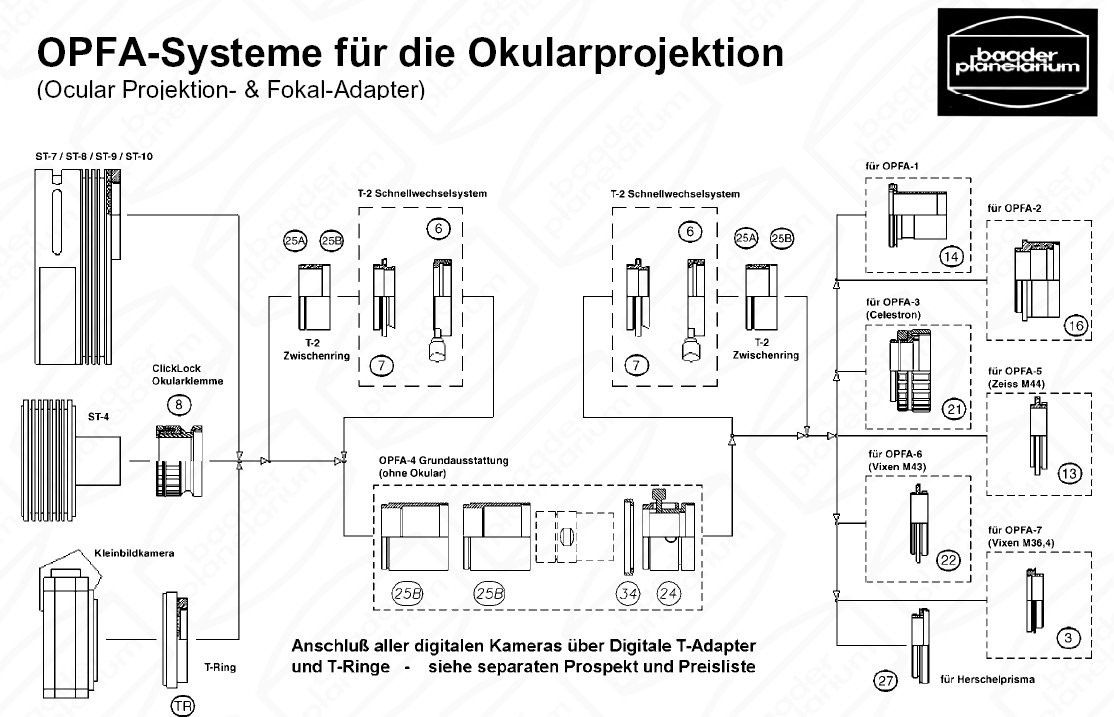 Each OPFA is a complete accessory set for focal photography and eyepiece projection (without projection eyepiece and without T-2-ring for the camera) with connection to the telescope, sliding focuser and 2 pieces of 40mm T-2 extension tubes.  A suitable T-2-ring for your camera must be ordered separately.

Our OPFA projection systems can be set to be light-tight and bolt-tight, so nothing can wobble anymore. With additional T-2 extension tubes, even extreme projection scales can be achieved – even with CCD cameras!

Each eyepiece projection works in the same way, although there are some practical differences wheather the camera is used WITH or WITHOUT lens. When working with a (digital) SLR camera, the lens is usually removed, and the camera body is attached directly to the projection unit.

If the camera lens is integrated into the system, this is called afocal projection. This is the usual method when shooting with digital viewfinder cameras, where the lens can NOT be removed. For these cameras, we recommend the ADPS, which can be set to a short distance between eyepiece and camera lens. The following diagram shows the structure of the classic eyepiece projection with cameras, where the lens can be removed.

The focus plane or focal image of the telescope is projected onto the film/camera sensor via a projection eyepiece (similar to a slide projector, which projects the magnified slide onto a screen). The resulting focal length is called the equivalent focal length (fE).

The reproduction scale depends on the focal length of the eyepiece (fEP) and the projection distance (a). The equivalent focal length is calculated as follows (the longer it gets, the bigger the image on the film becomes):

The effect of the different parameters can easily be seen from the formula. If the eyepiece focal length is reduced and / or the distance a (between focal point of the eyepiece and the camera sensor/film) is increased, the value of the equivalent focal length (and with it, the magnification) increases; the picture gets bigger.

The parts marked in blue correspond to the OPFA-4 basic version, which has a male T-2-thread on the  with camera side and a female T-2-thread on the telescope side. Each OPFA (model 1-3 and 5-7) has got another telescope adapter  included in the scope of delivery. In the example, the adapters of OPFA 1 and 2 are shown in green. The parts marked in red are not included in any OPFA!

The unit starts on the telescope side, i.e. on the focuser (to the right). Shown in the picture are OPFA-1 (1¼" nosepiece) and OPFA-2 (2" nosepiece). If your focuser has a different connector, you have to choose between OPFA-3 and OPFA-7 (e.g. OPFA-3 for Celestron and Meade Schmidt-Cassegrain telescopes).

Now, the two 40mm T-2 extension tubes are screwed onto the sliding focuser, the eyepiece (outer diameters of up to 38mm are possible) will be inside of the T-2 extensions. The extensions are used to set the distance between eyepiece and camera (ie to establish the projection distance). By adding more T-2 extensions (see our Astro T2 system), the distance (and the image) can be enlarged.

The OPFA is connected to the (digital) SLR camera through a camera-specific T-ring (not included).

The function of the sliding focuser and the locking ring

The sliding focuser makes a fine adjustment of the projection distance possible a by slightly pushing the eyepiece forward or backward.

In the models OPFA-3 to OPFA-7, the connection from the OPFA to the focuser is a rigid screw connection. Here, the camera orientation can only be changed via the locking ring of the sliding focuser.