Tips for Choosing an Energy Rejection Filter for H-alpha-Observations

This entry was posted on November 17, 2021 by Team Baader Planetarium

The purpose of an Energy Rejection Filter is to prevent as much solar energy as possible from entering the telescope in the first place and thus avoid excessive heating of the etalon of an H-alpha filter.

This is done most effectively by a filter in front of the telescope. At the same time, this prevents the air in the tube from heating up - the telescope remains close to the ambient temperature, and there are no air turbulences inside of the OTA due to temperature differences. If we look at the solar spectrum, it becomes clear that such a filter must primarily block visible light. Ideally, it reflects the solar energy energy instead of absorbing it and and does not heat itself up in the process as well - that's why these filters are called Energy Rejection Filters (ERF for short).

Since it is occasionally asked: A Herschel wedge or a white-light front-filter cannot be used as an ERF because it also darkens the H-alpha line. In H-alpha, the sun is far less bright than in white light, so there would be practically no light left to observe. 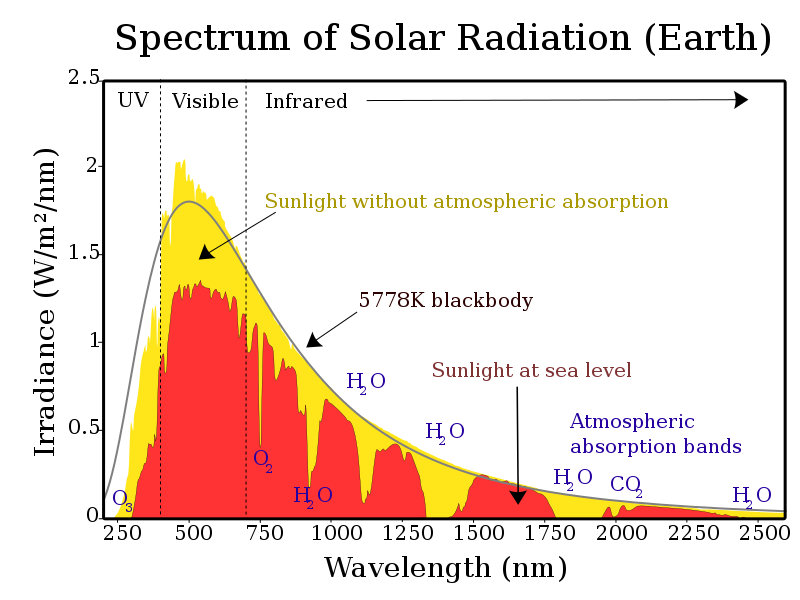 The solar spectrum with (red) and without (yellow) the absorption by the Earth's atmosphere. Quelle: https://en.wikipedia.org/wiki/File:Solar_spectrum_en.svg

There are usually three types of filters mentioned, when Energy Rejection Filters are discussed. 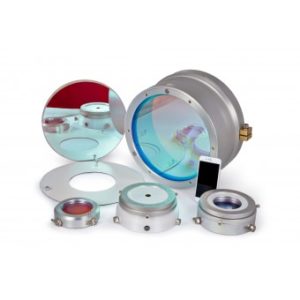 The most effective ones are Baader D-ERF, which are dielectric Energy Rejection Filters. The dielectric coating allows steep filter edges, so that only the wavelengths around the H-alpha line pass through. (As a special case, D-ERFs can also be made for other spectral lines such as the calcium line at 393nm, or as in the case of the Baader Triband telescopes, they can be designed so that narrow-band deep-sky photography remains possible despite the energy protection filter).

A D-ERF has got a broad transmission window of 80nm centered around the H-alpha-line. All other wavelengths up to those far in the ultra-violet and infrared parts of the spectrum are blocked before they can reach the inside of the telescope. This way, the H-alpha-filter in the telescope's focuser is not stressed by large amounts of energy. 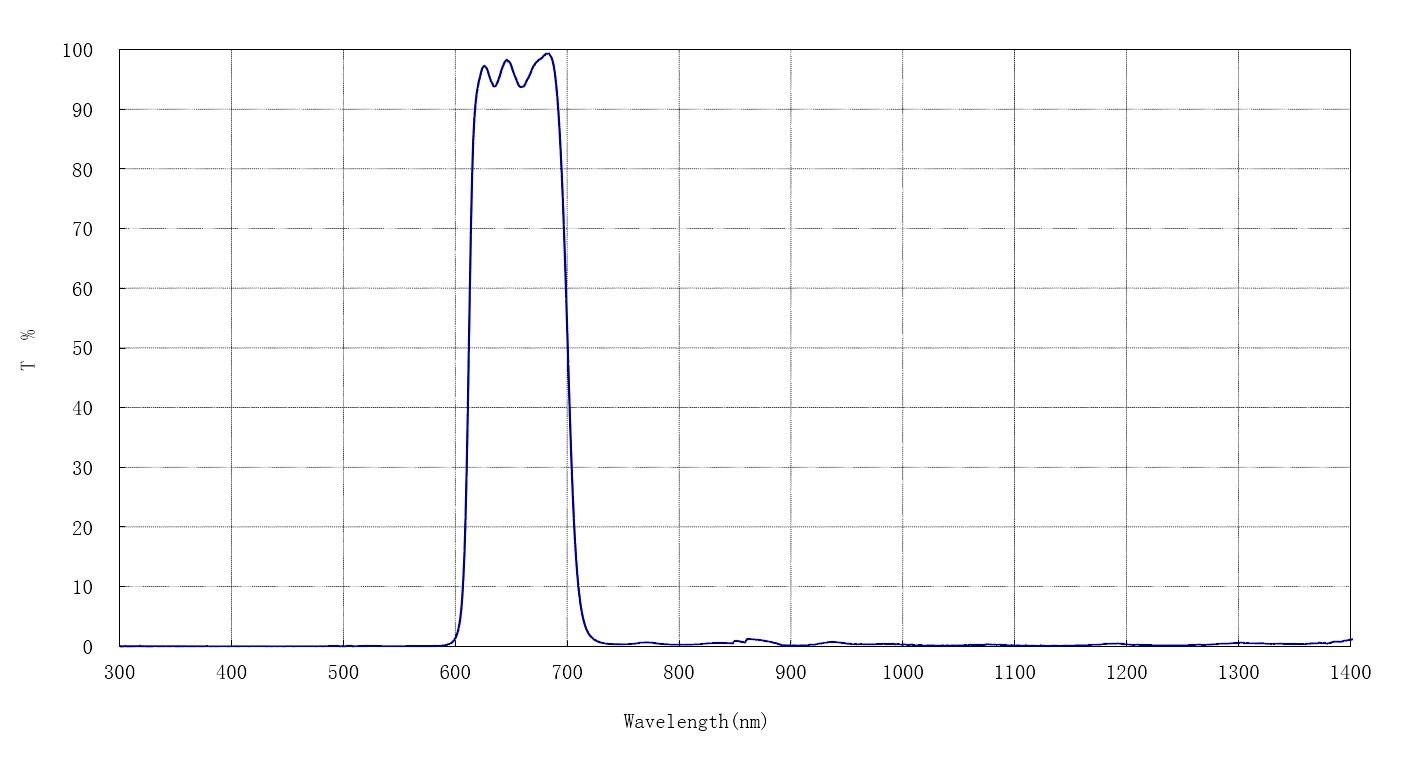 Transmission spectrum of a Baader D-ERF

An older filter type are simple ERF filters made of red glass. In practice, there were three different types of these ERF filters made, each with its own disadvantages. The cheapest version was made of Aero Glass, which has been used since the 1980s. They let most of the red light (down to 580 nm) pass through and usually did not have very good optical quality. The filters with better optical quality used Schott RG610 or RG630 (or comparable) glass, which block up to 610 or 630nm respectively, but offer no protection from infrared radiation. The energy load for the etalon is therefore higher.

As third option, sometimes yellow ERF-Filters can be found – but they offer almost no protection against energy, as a look at the solar spectrum shows, and should be avoided at all costs. They are only a little bit better than no ERF at all.

As these Energy Rejecting Filters are placed in front of the objective lens, the demands on the optical precision are the same as for the front lenses, so that they are not cheap.

ERF – behind the front lens

Therefore, it becomes attractive to install the Energy Rejection Filter close to the H-alpha-filter, so that a smaller diameter is sufficient. This option is often discussed, especially in the case of self-builds. It has a few disadvantages, among others: 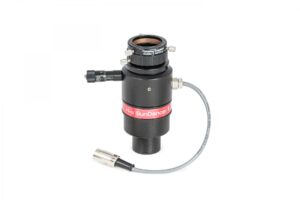 For smaller telescopes up to 80mm aperture and slower focal ratios (about f/8 or slower), there are complete systems such as the Baader SunDancer II H-alpha Filter (#1363056 , € 3545) , in which the block filter is paced in front of the telecentric and also corporates as an energy protection filter. The Daystar Quark filters also work without an additional ERF up to 80mm telescope aperture. With these H-alpha filters, the sun can also be observed without an expensive D-ERF; but an additional D-ERF can reduce bad seeing inside of the telescope tube if necessary or lets you use the H-alpha filter on larger telescopes, too.

Sometimes – not only on ATM-websites, but also by some dealers – a yellow ERF-front-filter or even a UV/IR-Cut-filter in front of the star diagonal (and thus in in front of the complete H-alpha-Filter-unit) is recommended as Energy Rejection Filter for these small H-alpha-systems. But a look at the solar spectrum shows the problems of this concept: Only a small fraction of the sun's energy is in the UV/IR part of the spectrum at all; while most energy is in the visible part.

The idea probably originates from visual observation of the sun in white light. There, a UV/IR blocking filter makes sense if you are not sure that the solar filter attenuates the visible light and completely blocks the invisible UV/IR radiation, too. For the eye, unfiltered UV/IR radiation is harmful because we do not notice it; for the filter system of an H-alpha filter, it is not a big problem: if it heats up the filter too much, you can see it in the temperature display and the decreasing image quality long before any damage occurs - unlike in the eye.

A simple UV/IR filter or a yellow filter is thus a bad choice as the only Energy Rejection Filter, as it lets most of the solar energy passes through it. 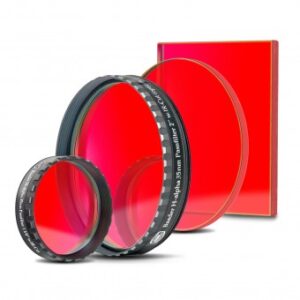 If you want to use a filter as Energy Rejection Filter close to the H-alpha-filter, you should use a narrow bandpass filter like a hard-coated Baader H-alpha 1¼" CCD-Filter (35nm) #2458381, or a filter with an even narrower transmission window. It should make no difference if it is a 10nm-filter or even narrower. A soft-coated filter (that is a filter with a standard coating) will quickly age and bleach so close to the focal point of telescopes with f/6-f/8. Especially if you want to use a simple red filter, you should use it behind the telecentric system (so that the energy is ditributed onto a larger diameter) and never with telescopes larger than 80mm aperture. A narrowband-filter will profit from this placement, too.

With self-made setups (such as modified PSTs), you must make absolutely sure that all filters fit together. Baader D-ERFs are heat-reducing pre-filters for H-alpha observation with SolarSpectrum filters that have an additional IR block coating. Especially with modified PSTs, please note that the IR blocking is located on the front lens of some models and is thus removed during a conversion - then an additional energy protection is necessary, which is not provided by a standard UV/IR filter. We cannot give any tips on these conversions, as we do not know the exact construction of other manufacturers.

The purpose of an ERF is to protect the expensive etalon from heating up beyond its operating temperature (and in no case beyond the highest storage temperature). If the operating temperature is exceeded, the central wavelength shifts away from the H-alpha line. An electronic temperature control with cooling counteracts this as far as possible. In earlier times, when 4" f/15 telescopes were used for H-alpha observation and no ERF filters could be used, the telescopes were simply stopped down to f/30 - and if the filter became too warm, the objective was covered until the filter had cooled down again. These observation breaks are still a good idea today – if the filter gets too hot, it will be damaged beyond repair.