This entry was posted on December 18, 2018 by Dipl.-Ing. Wolfgang Paech 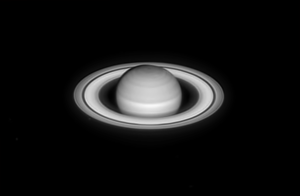 On 28 July 2018 around 22:00 UTC we obtained the best image of the planet Saturn so far. It was taken through the 17" Planewave Astrograph of the Rooisand Observatory in Namibia. The imaging camera was a ZWO ASI 290M with 2.9 µm pixel size. The primary focal length of the telescope was extended by a factor of 1.7 with a Baader Q-Turret Barlow lens element, the equivalent focal length was about 5 meters. A total of 3000 single images were taken, of which 10% were stacked. A Baader IR pass filter was used to calm the seeing condition.

After processing the raw sum image, a thin black line appeared in the outer ring area, which seemed to be the Encke Gap in the A-ring. It was discovered in the year 1837 by the Berlin astronomer Johann Encke, at this time it was estimated to be 300 km wide. According to measurements taken by the Voyager spacecraft in 1980/81, the width is 330 km.

At Saturn's distance in July 2018, these 300 kilometres corresponded to only 0.05 arc seconds. However, the resolution of a 17" telescope at the deep red wavelength of 685 nanometres of the IR pass filter is theoretically only 0.33 arc seconds. So how is it possible that the Encke Gap is visible on our image?

In the case of the Encke Gap it is as follows: The camera pixels on which the dark gap is imaged receive slightly less signal than the surrounding pixels, which image the brighter part of Saturn's ring. This means that the pixels in which the gap is imaged appear darker in the final image, even if the gap only covers a fraction of a pixel on the camera sensor.

To eliminate the possibility that "our division" is an artifact of image sharpening, we have scaled our image by a factor of 2 times and superimposed it with an image of the 1m telescope of the Pic du Midi (image by Damian Peach). And see there, the position of the gap is identical. The animation shows the slightly changed position of the ring system as viewed from Earth between June and July.

The image is a "small sensation" for us and shows the high optical quality of the Planewave astrograph.