The disc of Mercury near the upper conjunction, captured with the Baader APO Travel-Companion 95/580

This entry was posted on September 1, 2020 by Alexander Kerste

Our customer Jörg Schoppmeyer sent us this unusual picture: a circular Mercury, shortly after the upper conjunction and only 1.8° away from the Sun! 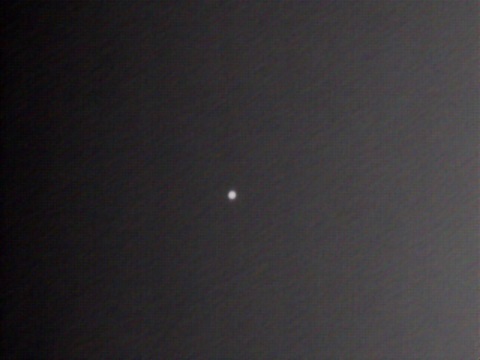 Mercury is traditionally a difficult object to observe. The reason: The small planet is always close to the Sun and can be seen with the naked eye only shortly after sunset or before sunrise when it is at maximum distance from the Sun. Legend has it that even the great astronomer Johannes Kepler never saw Mercury with his own eye - but Kepler did not have a modern telescope with accessories from Baader Planetarium... 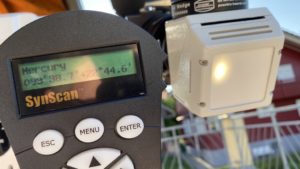 During the hunt for Mercury, the Sun is at the edge of the field of view - but there is no danger for the tube with the 2" Herschel wedge.

On August 18th, 2020, Jörg Schoppmeyer pointed his BAADER APO 95/580 CaF2 Travel Companion (#2300095, € 4495,-) at Mercury. Since the small planet was only 1.8° next to the Sun, all filters needed for safe solar observation had to be used here. In this case this was a 2" Cool-Ceramic Safety Herschel prism, whereby the additional ND filter was replaced by a Baader Contrast Booster 2" filter. 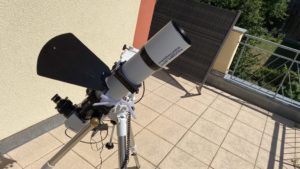 Would it really be possible to catch the tiny Mercury with a brightness of only -1.8mag next to the much brighter Sun? This requires maximum contrast without stray light - neither from inside the telescope nor from outside. Shadow for the observer was provided by a shading plate placed on the tube, while the Herschel wedge provided maximum image contrast. The ceramic plate of the heat trap also always reliably indicates the position of the Sun - to make sure that it doesn't come too close to the tube and might scorch the inside of the telescope! With a 1.25" Herschel Wedge, this experiment would not have been possible.
With the usual gray filter for additional light attenuation, Mercury could not be seen. The breakthrough came with the contrast booster, with it it was much easier to find the small planetary disk in the image and then capture it photographically.
We can only congratulate on this rare shot - when do you ever see Mercury not as a crescent at a "comfortable" distance from the Sun, but as a "full Mercury" behind the Sun?

Working in such close proximity to the sun without a sun filter carries the risk of accidentally getting sunlight into the telescope, which leads to immediate blindness when used visually! We therefore advise you against imitation.
Every Solar Diagonal needs additional neutral density filters since the reflected energy of the first surface prism (4.6%) still is a factor of 1000 too large for the human eye. All Baader Solar Diagonals are delivered with a pre-mounted ND 3.0 Baader precision 2 light reduction filter. The photographic version includes other ND-Filters to achieve shorter exposure times. Use with care!

View all posts from Alexander Kerste

4 thoughts on “The disc of Mercury near the upper conjunction, captured with the Baader APO Travel-Companion 95/580”