The benefits of telecentric systems

This entry was posted on February 9, 2022 by Alexander Kerste

A Barlow lens is the best-known way to change the focal length and thus the focal ratio of a telescope. A telecentric system is similar to a barlow, but also contains an additional positive lens element. This makes it possible to change the focal length of the telescope and to achieve a parallel beam of light. For most applications, therefore, a barlow lens is fine; but especially in connection with narrow-band interference filters (as for solar observation in H-alpha), the more complex construction of a telecentric system is absolutely necessary. However, both systems have their own advantages

To understand the differences, you must first understand: The position of an image point depends on how far it is away from the centre of the image. With a Barlow lens, the distance increases with the extension factor, so the image is "blown up" after the Barlow.

Schematic presentation of the beams of light with a Barlow lens (dashed: without Barlow element). Light rays farther away from the image center (shown in orange and grey) diverge outwards. See also the animation.

With a telecentric, all the magnification is done purely within the telecentric system, so the light rays remain parallel and do not diverge outwards. This has some effects in practice.

One of the noticeable properties of a Barlow lens is that it extends the eye relief of an eyepiece, as it widens the optical path of the telescope. Depending on the design (long/short Barlow), the extension factor, the distance to the eyepiece and the focal ratio of the telescope, the eye relief can increase by 20-30%, which can be undesirable, especially with long focal length eyepieces with an already larger eye relief, if the optimal eye position is then high above the eyecup.

At first glance, this effect is unexpected, since the eye relief is a property of the eyepiece. However, due to the Barlow's diverging beams of light, it virtually becomes a part of the eyepiece, as it changes the expected properties of the incident beam of light. The eye relief of an eyepiece is specified for approximately parallel or converging light rays - for diverging light rays, the image plane moves further out.

The widened light beam can also cause light to bypass the lenses of the eyepiece and therefore vignette the image – the vignetting then does not come from the free aperture or the lens diameter of the Barlow lens, but originates in the eyepiece, which is too small for the resulting light bundle!

With telecentric systems, no light is shifted outwards, so the eye relief does not change. However, the light bundle does not widen either - if the lens diameter of the telecentric is smaller than that of the eyepiece or the camera sensor, this leads to vignetting. 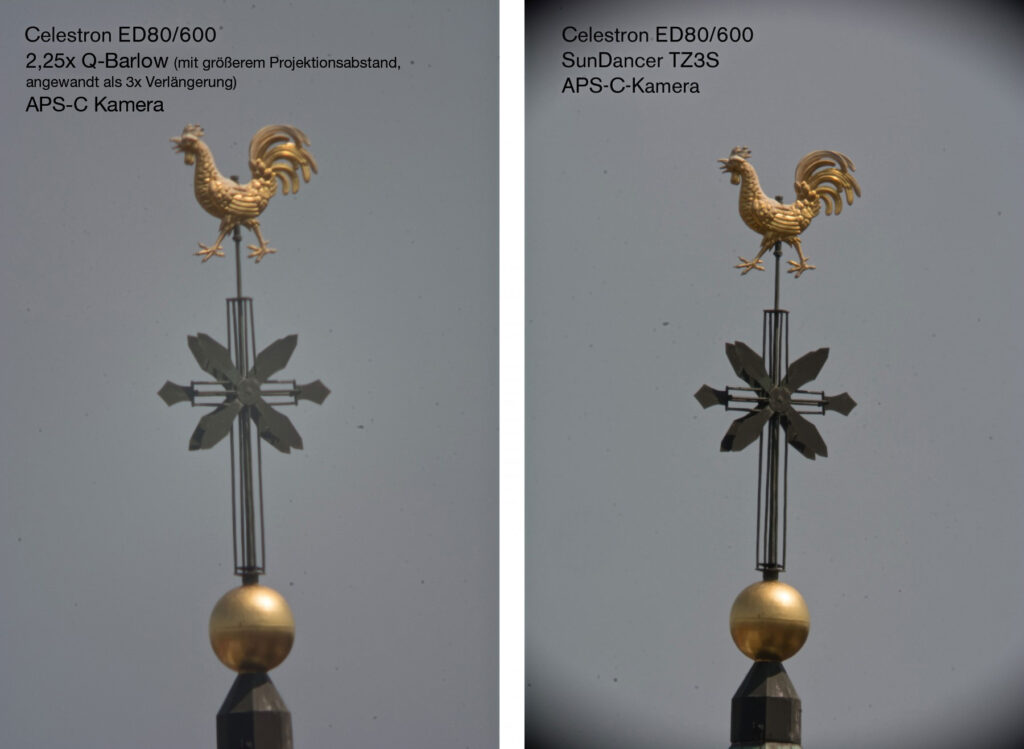 This is clearly visible in the example of the church spire. Here, for reasons of comparison, the 2.25x Q-Barlow is "abused" with extension tubes to 3x magnification - which causes a clear drop in sharpness. This is a good example that a Barlow lens should be operated in the magnification range for which it was designed.

With a telecentric system, on the other hand, the magnification factor is largely independent of the distance, even though it is also calculated for an optimal working distance. In practice, it is possible to deviate very significantly from this calculated ideal distance without noticeably changing the magnification and image quality. The TZ-3S, for example, has such a benign design that even the huge optical length of a bino-viewer does not cause any loss of contrast or sharpness. You can find test results for the Baader TZ-2 in this PDF:  Baader Telecentric System TZ-2 - How important is the Working Distance?
This means that a Barlow lens is more flexible regarding slight variations of the magnification factor, while a telecentric actually always delivers almost exactly the expected magnification – even if there are other accessories between the telecentric and the eyepiece.

Finally, the shifting of the fokal point must be considered, or more precisely the position of the focuser: with a Barlow lens, the focuser must be retracted one to two centimetres further than without. With a telecentric lens, the focus point shifts less – although this also depends on how well you want to maintain the ideal working distance. You can find more detailed information in this PDF: Baader Telecentric Systems (TZS) for H-α solar filters

This also has advantages and disadvantages. For example, a barlow is often recommended to get into focus even when the focuser cannot be retracted far enough. A special variant of a barlow lens is the glass path corrector, which changes the focus position for a bino-viewer in such a way that you can still come into focus. Please note: A glass path corrector is not a pure barlow lens, but a special variation of it. Since it also corrects the refractive effects of the prisms of a binocular viewer, it is constructed differently from a Barlow lens.

So both barlow lenses and telecentric systems have their advantages, and with good manufacturing quality they take little away from each other for most applications. For H-alpha solar observation, however, there is no alternative to a telecentric system: with a Barlow lens, the divergence of the rays causes the light rays to pass through the actual H-alpha filter (the etalon) at a slight angle with increasing distance from the centre of the image.

Since an etalon (also known as a filter according to Fabry-Pérot) is based on interference, it is important that the light travels the exact, shortest length between the two λ/100 plane-parallel surfaces of the etalon. It is important to understand that a beam of light in such an etalon - which is only ~2/10 mm thick - is reflected back and forth between the dielectric coatings on both sides up to 1000 times! This is the only way that all unwanted wavelengths can be cancelled out by interference, leaving only the H-alpha light. However, if the beam of light entering the etalon is already divergent because of a Barlow lens – or convergent through a native f/30 objective – then, with a thousandfold reflection, the extinction in the etalon will be different towards the edge than in the centre. As a result, the Half-Band-Width (FWHM) of such an incorrectly used etalon also changes from the centre to the edge ever so slightly, which is absolutely undesirable for high-precision filters with a 0.3-0.7 angstrom (Å) passband. As already mentioned - even telescopes that would by default have the desired focal ratio of f/30 or slower do not have the parallel beam path of a telecentric. In this case, the beam path will still be slightly conical and turn a 0.5Å filter into a 0.7Å filter – or lead to an even wider passband (FWHM).

That's why Baader Planetarium has been offering telecentric systems for many years which are made especially for the high-end Solar Spectrum solar filters and comparable designs, where the etalon is placed far behind the objective. They have been specially designed for the H-alpha line. Since 2022, the series has been supplemented by the achromatic SunDancer II TZ3-S, which is designed for the entire visible spectrum – and thus can even be used for observing the calcium-line when combined with a Calcium-K-line-etalon.

The only disadvantage of telecentrics for H-alpha observation – which is the very long focal length due to the desired focal ratio of f/30 – can be partially compensated for with a reducer (0.4x or 0.7x telecompressor) calculated for the telecentric. 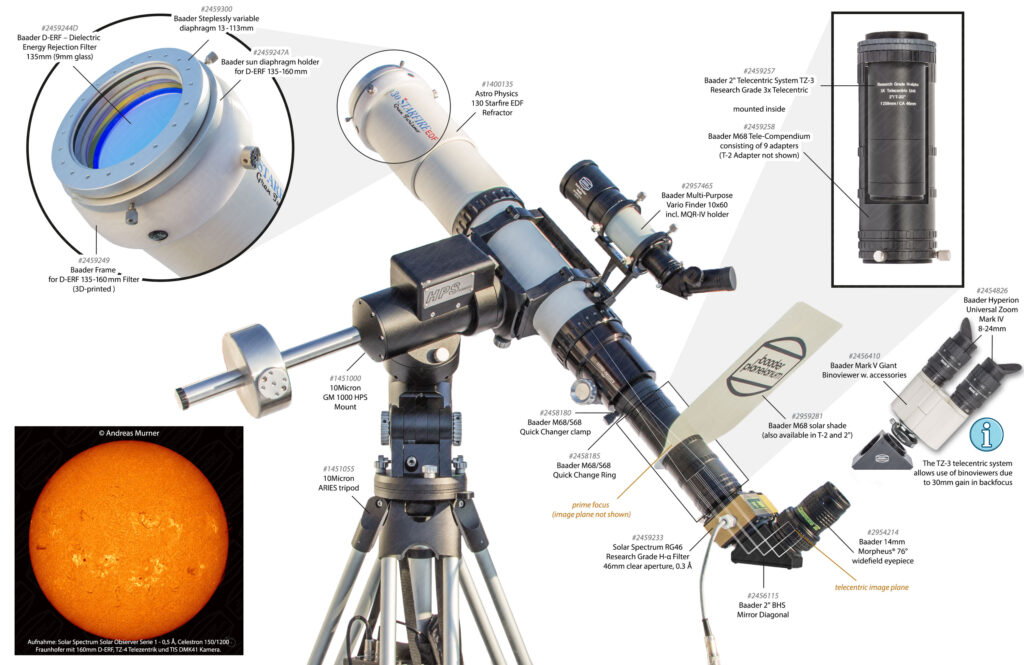 The Telecentric Systems made by Baader Planetarium 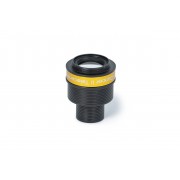 As an achromatic system, it delivers a sharp, high-contrast image across the entire visible spectrum. The image circle at a distance of 96mm is 35mm, making it ideal for planetary photography and for camera sensors up to this diagonal (or generally with a 1.25" mount). On the camera side it offers a T-2 thread, on the telescope side it is equipped with a dual 1.25"/2" nose-piece.

Depending on the telescope system used, the 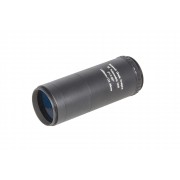 2" Research Grade TZ-3 Telecentric System (3x focal length) 2" Research Grade TZ-3 Telecentric System (3x focal length) (#2459257, € 420,-) delivers up to 99% Strehl at the H-alpha line of 656.3 nm, even for Calcium-K (396nm) it still delivers diffraction-limited imaging with approx. 80% Strehl. Compared to the twenty years older TZ-4, it offers not only a significantly better optical calculation, but also a larger field of view: With 46mm free aperture, it fits perfectly to the large SolarSpectrum Research Grade filters with 46mm aperture. This means that large camera sensors can also be used on large telescopes with a correspondingly large focal length, in order to survey the entire sun if necessary or to photograph large fields – depending on the resulting focal length. Not least because of the larger image detail, it can make sense to use the Research Grade TZ-3 instead of the TZ-4 and to stop down the telescope to get the required f/30. The loss of lens resolution is usually compensated by the better filter contrast and in combination with a telecompressor the focal length can be reduced.

The 2" Research Grade TZ-3 has 2" SC- T-2 threads on both sides, so that even heavy cameras and filter units can be firmly screwed to the focuser without tilting.

The free aperture of both the telecentric and the H-alpha filter as well as the focal length of the telescope determine the field of view – i.e. how much of the sun is visible at once. 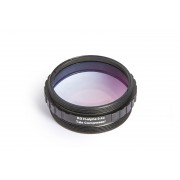 SolarSpectrum Research Grade 0.4x Telecompressor 2" SolarSpectrum Research Grade 0.4x Telecompressor 2" (#2459260, € 345,-) reduces the focal length loss-free by a factor of 0.4x. The field of view is then 16 mm at a distance of 74 mm from the camera sensor. Similar to a Barlow lens, the reduction factor depends on the distance, so the working distance should be maintained. Since it significantly compresses the field of view given by the H-alpha filter system, vignetting occurs with large sensors and smaller H-alpha filters, so it is suitable for the large Research Grade filters with 46 or 32 mm aperture.

Due to the smaller lens diameter, the 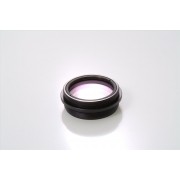 SolarSpectrum 0.7x Telecompressor 2" SolarSpectrum 0.7x Telecompressor 2" (#2459259, € 295,-) can only accommodate the beam of light produced by a filter with an etalon with a maximum diameter of 35 mm. But since it compresses the image less, a 25 mm etalon diameter with the TZ-3, for example, results in a field diameter of approx. 17 mm, so the usable field is comparable to the 0.4x telecompressor. The 0.4x telecompressor would therefore illuminate the same sensor size – but the image section including the sun would be smaller, and a larger part of the image would be vignetted or would only show the back of the filter mount.