This entry was posted on September 6, 2022 by Alexander Kerste

Sometimes it is worth giving things a second chance after many years. Panta rhei, as the saying goes…

The Baader Solar Continuum Filter is such an inconspicuous thing that I had largely ignored after a first quick test 15 years ago and which has now completely convinced me in its current incarnation with 7.5nm FWHM: 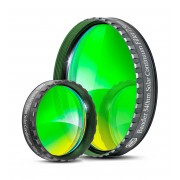 Spoiler: Correctly used, it has got an incredible potential – not only to remove the colour aberrations of achromatic lens telescopes as expected, but to my great surprise also when imaging the Sun through apochromatic telescopes.

Here is an image comparison, taken through a Zeiss AS 150/2250 telescope, with Baader Herschel wedge and an additional ND3-Filter – on the left, supplemented with a ND0,9-filter (exactly as for visual observations, and to get comparable exposure settings), on the right supplemented with a Baader 7,5nm Solar Continuum filter. The camera was a monochome ZWO ASI Mini. Below the images is a screenshot of the live view and the exposure settings, above is the final, stacked image. 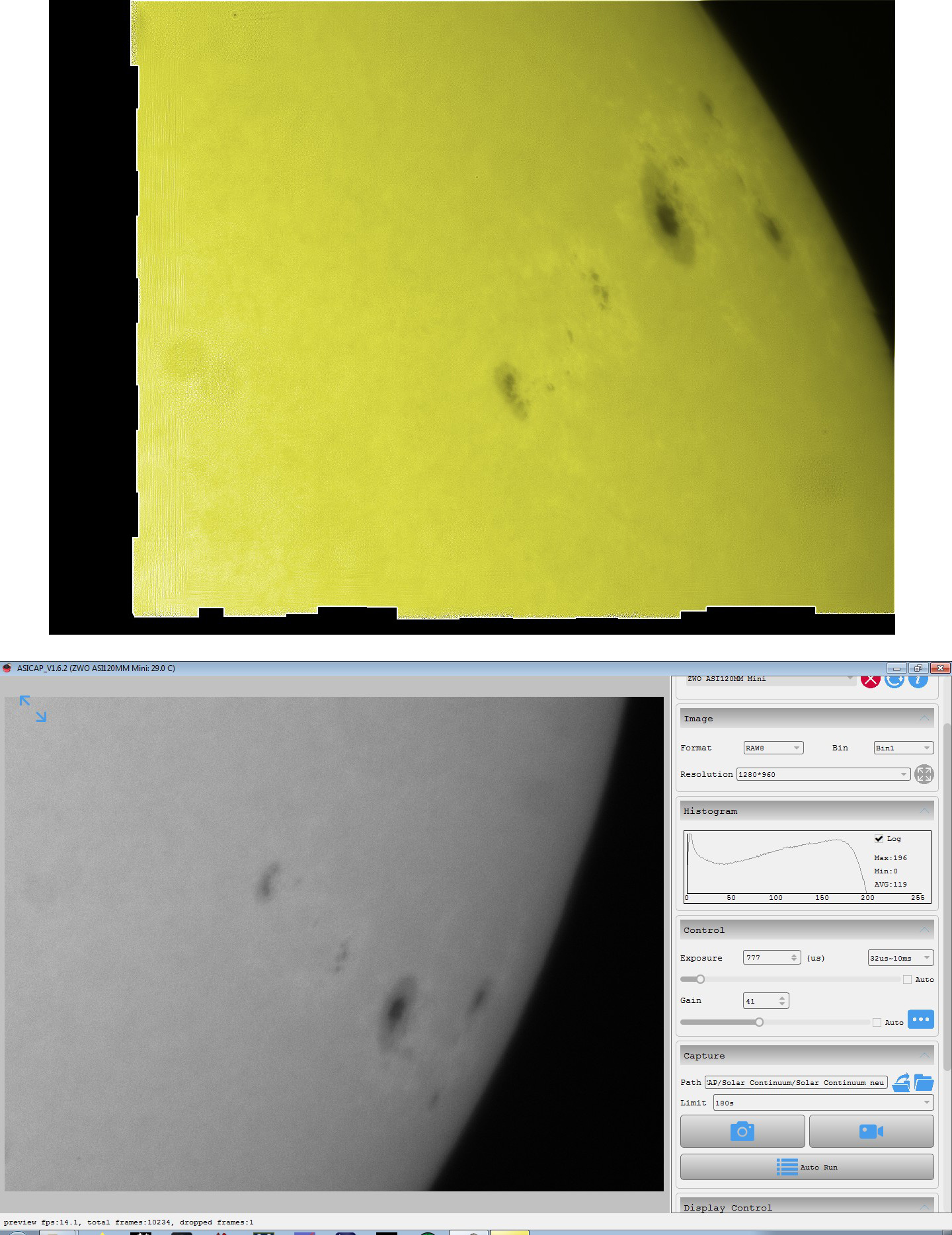 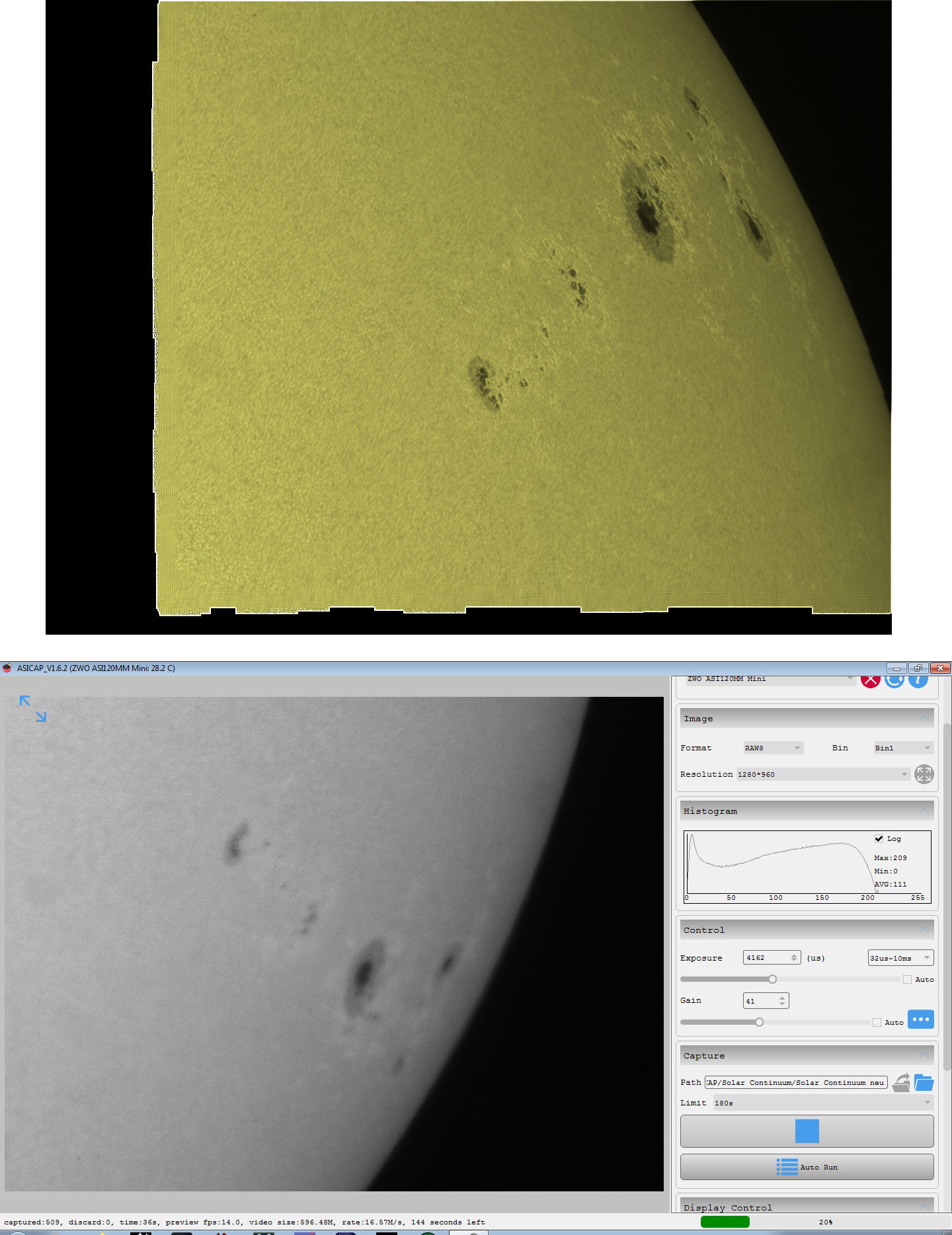 Although the Baader Solar Continuum requires a longer exposure time, the gain of contrast on the semi-apo is impressive, so I did some more experiments with this filter.

As this test has become more extensive than expected, here is a small index, so that you can skip to the most interesting parts for you:

First, let's take a brief look at the theory: the Sun can be observed either in white light (aka: continuum, i.e. in all colours at once which are emitted by the photosphere - its glowing hot surface), or only within selected spectral lines (especially H-alpha at 656.3nm and calcium at 396.8 nm and 393.4nm). 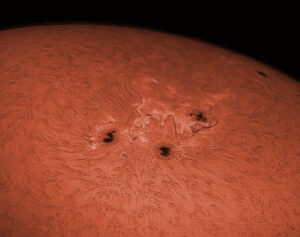 Just for comparison: The same region of the Sun, which was photographed on April 19th, 2022 with the Baader 7,5nm Solar Continuum – but now with a 0,6Å , also through a Vixen 80/910Mf. The image was colorized in post-processing.

These distinctive spectral lines fluoresce in the Sun's chromosphere and therefore shine less bright than the surface of the Sun, so the filters must pass light preferably just within the selected emission line. This does require extremely narrow-filters, being outrageously expensive. For this reason, especially 656.3nm H-alpha filters need to be extremely narrow, with a transmission window of about 0.06nm or 0.6 Angstroem (+/- 0.1 Ang).

On the other hand, the wider 396.8 nm and 393.4nm Calcium-filters (K-line filters with half-band-widths of ca. 8nm) in comparizon do allow the observation of both calcium lines at once and supply excellent contrast even if they are considerably broader to show both Calcium-lines than H-alpha. Calcium observation – only with a camera! – though will require a front aperture white-light solar filter (AstroSolar ND3.8, a Herschel wedge or a special D-ERF as it is used only in the Triband-Schmidt-Cassegrains) in front of a narrowband calcium filter.

Calcium-filters with a half-band-width of less than 1Å show even more details on the Sun. Basically, they use be the same the same technic as with the use of H-alpha filters and both filters are similarly expensive. However, the calcium line is almost in the UV, which has two disadvantages: it is already harmful to the eye, and even if the optical calculation of the telescope would transmit this wavelength with suffficient quality, we hardly notice the calcium light with our eyes. The Calcium-Sun is therefore purely a target for photography!

When we look at the solar continuum - that is the uninterrupted spectrum, or the Sun in white light - these special Fraunhofer fluorescence lines are lost because they are weaker than the light from the glowing hot surface of the Sun. In white light, therefore, we can see only the photosphere. In a Herschel wedge with good neutral density filters for additional brightness attenuation, the Sun therefore appears pure white; some filters give it a bluish or yellowish tint - but this is purely caused by the filters.

Therefore, when observing the Sun in white light (continuum), we can also limit ourselves to any part of the solar spectrum without loss of information. The 2022 version of the Baader 7,5nm Solar Continuum Filter has a half-band-width of 7.5 nm (instead of 10 nm before). This is much wider than the specialised H-alpha or calcium filters, but has amazing effects. Its transmission window is at 540nm and thus in the green part of the spectrum. It thus shows the Sun in that part of the spectrum where most refracting (lens) telescopes provide the best image without loss of any details - as the structures in the solar continuum are present in all wavelengths of the visible spectrum.

I made my first, few observations with a Solar Continuum circa 15 years ago with a (non-stacked) Baader 10nm Solar Continuum filter of the first generation, which came with my Herschel wedge in 2006/2007. At that time I was mainly a visual observer and was not very impressed by the filter: I gave it a shot on the Zeiss AS 150/2250 refractor of the Heilbronn Observatory and on my own Celestron ED80/600 - both telescopes that provide a very colour-clean image as long as you do not look at the Vega in a spectroscope. The effect was rather subtle: The clack green sun showed a little more detail on the Zeiss refractor at low magnification (around 50-100x), at high magnification the difference to observing with an ND filter was smaller. On the ED80, on the other hand, it showed a little more detail at high magnification above 100x. After all: the image was better than with a standard green filter, but as long as I was using colour-free telescopes for visual observations, I preferred a simple polarising filter with which I can adjust the brightness by turning the eyepiece behind the Herschel wedge and still see a pure white Sun.

Well, the times are a-changing, I've gathered more experience and equipment, and in spring 2022 I received the newest version of the 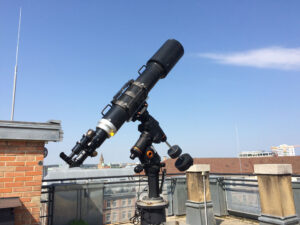 Looking through the eyepiece, there were no surprises: The effect was slight on the 150/2250 Zeiss AS and the ED80/600. The filter was much more effective on the achromats that had been added to our collection since then - a 150/1200 achromat that had come to Heilbronn from the former Schriesheim observatory, and a Vixen 80/910Mf in my own collection. Here, as expected, the colour error disappeared and the solar image became much richer in contrast. Here it is actually worthwhile to observe a green sun, as you can now magnify much higher profitably. So far, so good.

The Wow-Effekt with a Monochrome Camera

Unlike more than 15 years ago, I now have several digital cameras at my disposal. In 2006, my solar photography was still limited to single shots of the entire solar disk with a Nikon D50 DSLR. I was all the more amazed by the image results when I first tested the new Baader 7.5nm Solar Continuum Filter on the 150/2250 Zeiss AS with Baader Herschel wedge and a monochrome camera, which I have already shown at the beginning of this article. I would not have expected such a big difference between a neutral density filter and the Baader 7.5nm Solar Continuum, especially not at a semi-apo with almost no colour aberrations!

A few days later, after Easter, I had the next chance with clear skies. This time I used my little Vixen 80/910Mf, which I use mainly for H-alpha. Thanks to f/11 it doesn't suffer too much from colour aberrations, but it does show some colour when you magnify higher. You can tell that Vixen didn't use Japanese optics here.

Well, a cheap telescope "needs" a cheap filter, so instead of the Herschel wedge, I put the simpler, not temperature-compensating ASSF80 filter ( 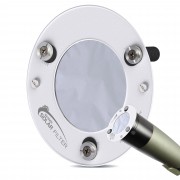 The preview on the laptop display (this time I was using SharpCap, which also helps focusing) wasn't too impressive, but the data weren't too bad: The image processing with Autostakkert and Registax gave a quite nice image, although with a surprising number of stripes.

Next shot: Again with AstroSolar film, but now replacing the ND-filter with the Baader 7,5nm Solar Continuum: The preview image was already much sharper and easier to focus. The result was again processed with Autostakkert and Registax, and it shows much more than the previous shot without the Solar Continuum filter: 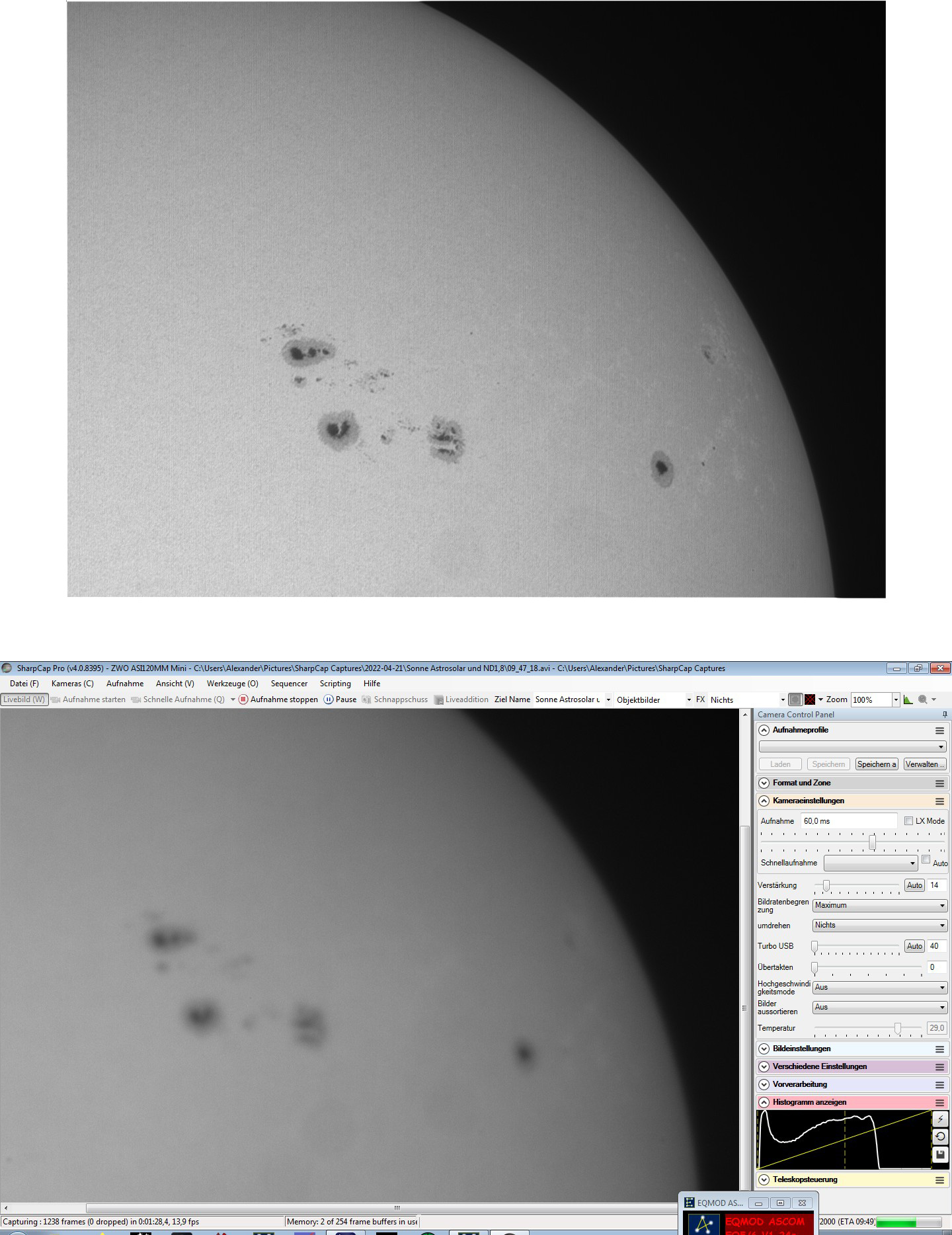 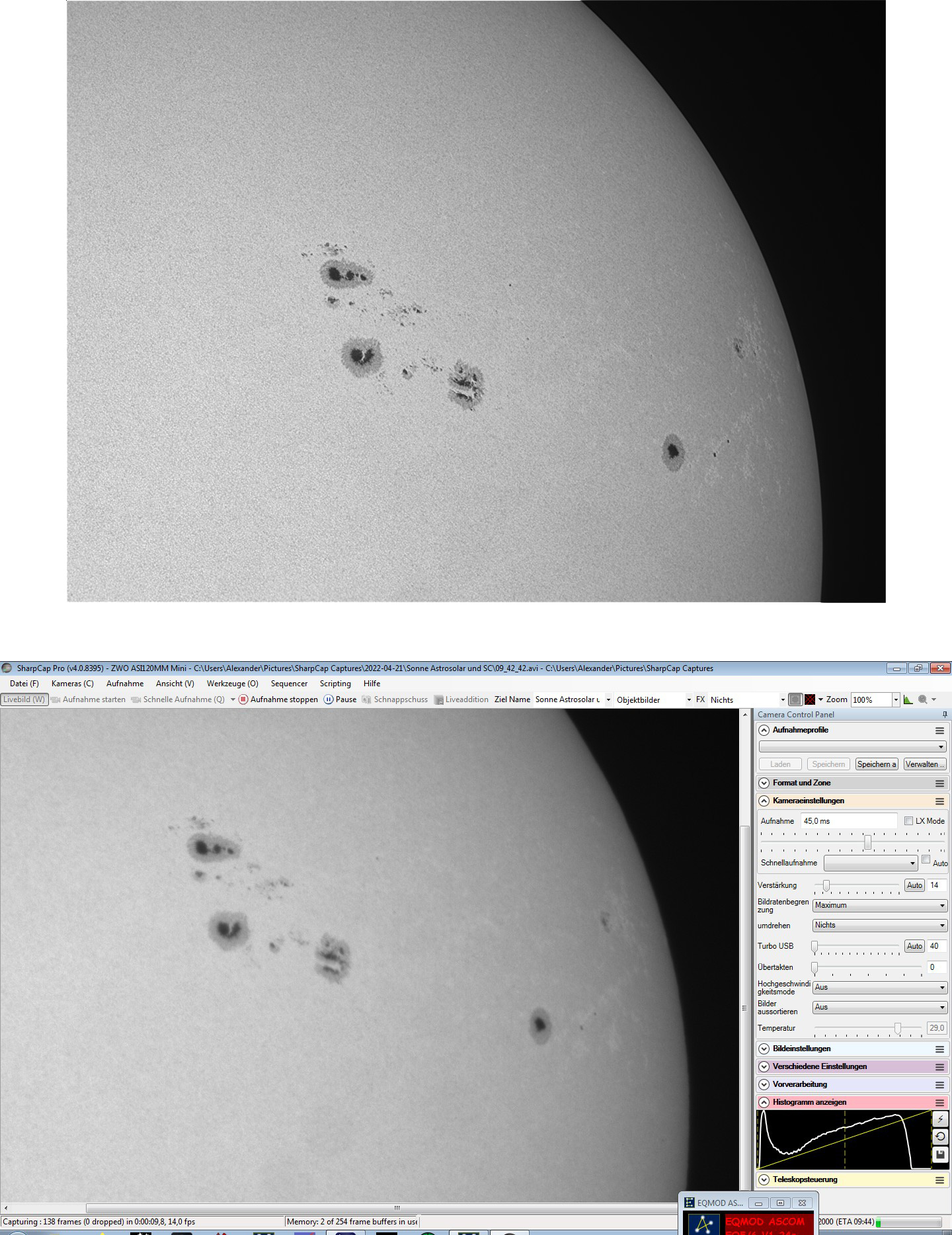 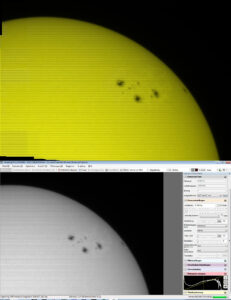 Vixen 80/910 Mf with Herschel wedge and ND3, without any further filters

After the test with comparable exposure times, it is of course still interesting to see what is possible with shorter exposure times. I used the Vixen 80/910Mf with Herschel wedge and ND3 again, but without any other filters. The result was a surprise: Although I could use much shorter exposure times, the image of the ZWO ASI Mini was unusable. Lots of stripes. Stacking and subsequent colouring don't help much either.

So I need a stronger filter to make the camera work? So much about short exposure times... 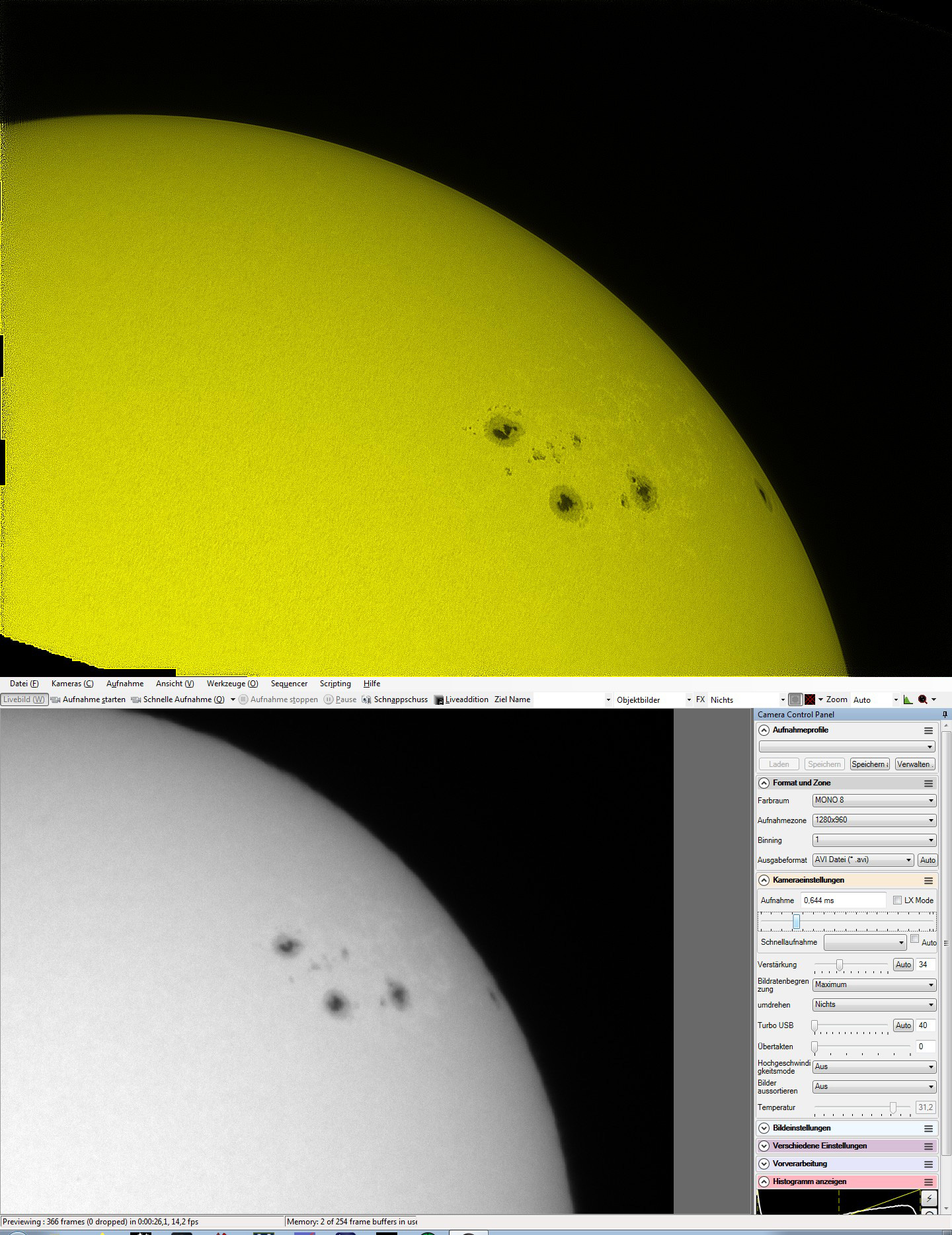 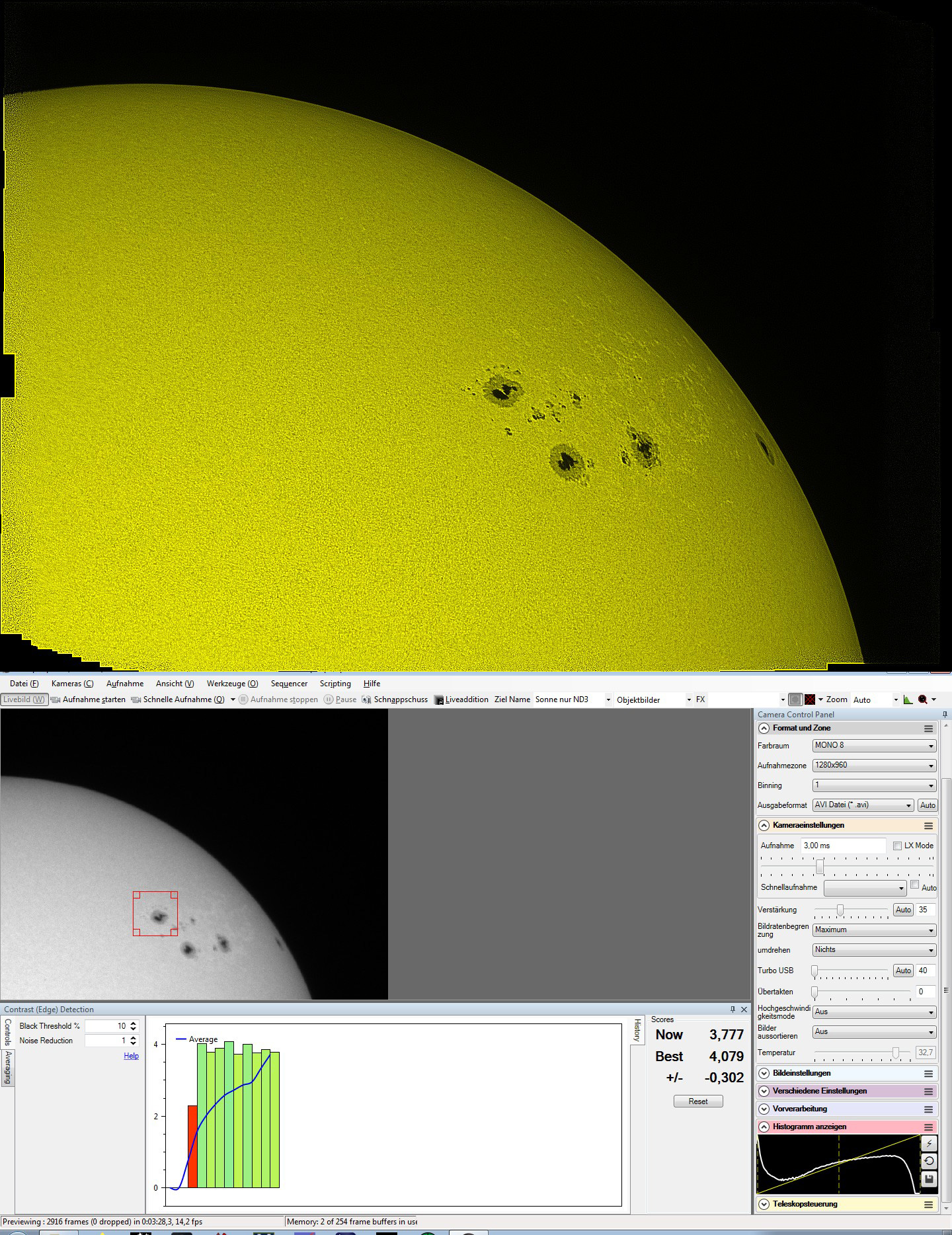 Here, too, a clear gain in contrast can be seen. It is also surprising how well the Astrosolar film performs in comparison - although a higher magnification was not possible with the seeing on this day.

DSLR and Mirrorless Cameras – The Sun in Colour

What's left? Of course the whole Sun in one frame, with a one-shot colour camera. I fetched my Panasonic G91; the MFT-Sensor is large enough for 910mm focal length. Unfortunately, I can't control this camera through my laptop, so I had to focus with the camera display. Not so easy in bright daylight...

Here it became noticeable again that with a colour camera and a narrow-band colour filter only a part of the sensor is used; the red and blue pixels are "left in the dark". Therefore, the advantages are not so obvious. On the other hand, Autostakkert has problems with 24-megapixel files, and the wavelets from Registax had practically no effect. Instead, I then processed the stacked image in Luminar, with sharpening and detail enhancement. 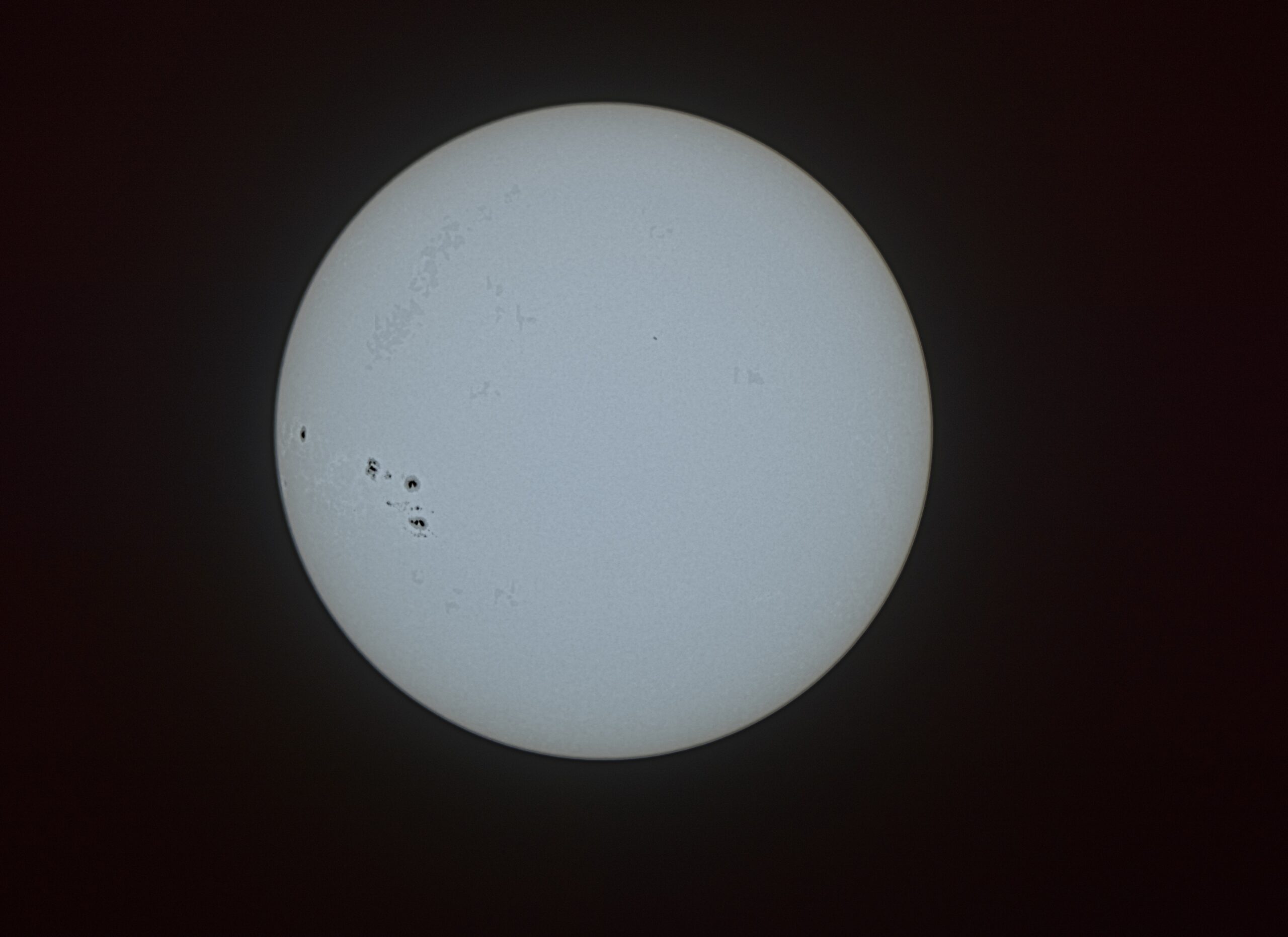 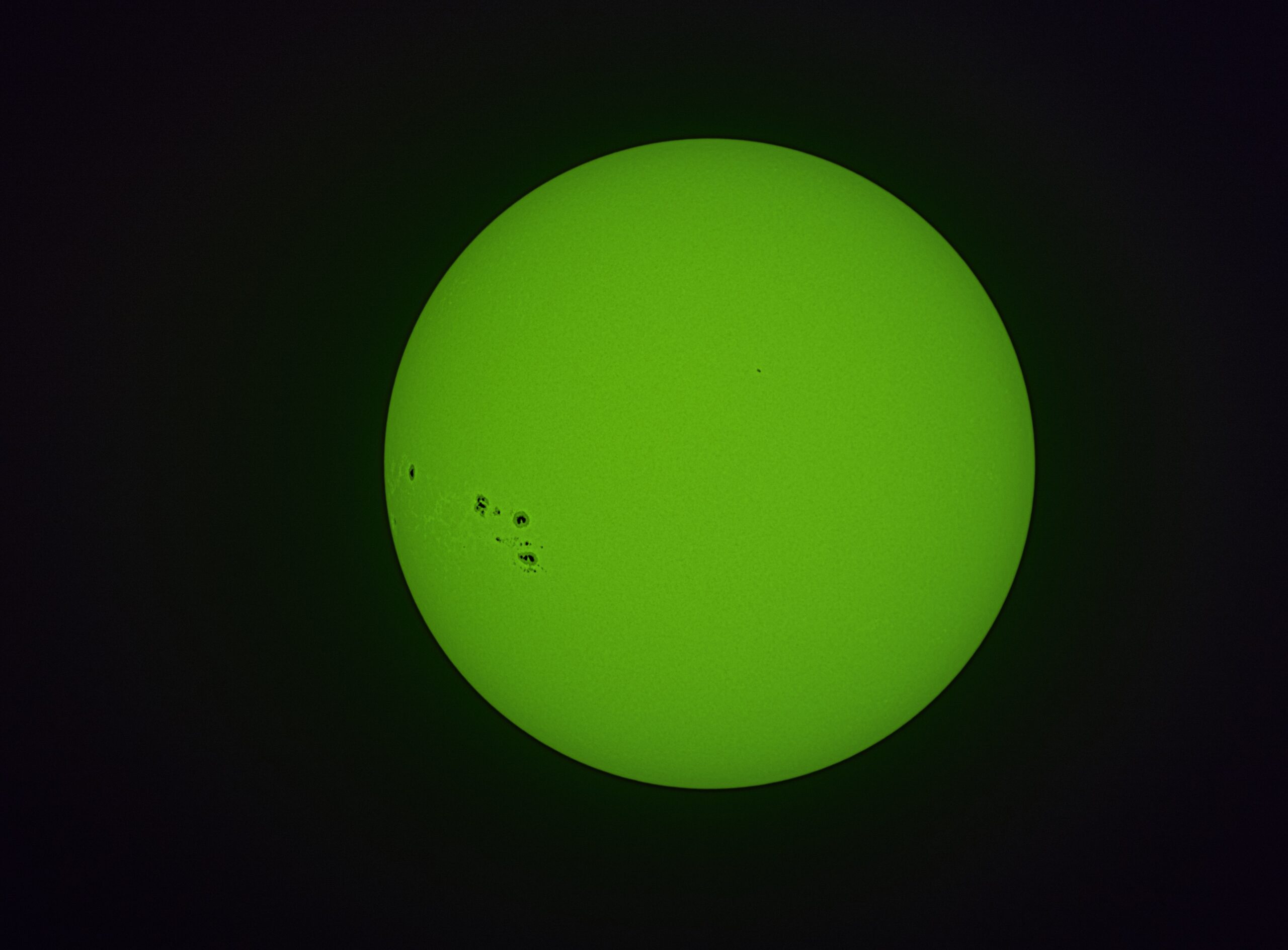 So I did one image with ND3 and ND09 placed behind the Herschel wedge: There are some artifacts from stacking, but the result is not too bad compared to the next try with ND3 and Baader Solar Continuum filter.

My conclusion of the test has to be split in two parts. First of all, the visual use:

The filter is a must-have for users of achromats, as the telescopes then finally can show sharp images of the Sun even at higher magnification.

The effect is more subtle on high-quality apochromats without colour aberrations. With an apo, the Baader 7.5nm Solar Continuum Filter (540nm) (various versions available) is worth a try if you are really looking for fine details at high magnification; occasional observers can probably do without it. On the Herschel wedge, I prefer a simple polarising filter to attenuate light while keeping the Sun's image white.

Photographically, it looks quite different. Anyone who seriously wants to photograph the Sun and uses a black and white camera will benefit enormously from the Baader Solar Continuum filter, even on an apochromat. On reflecting telescopes, the effect should be similarly impressive.

On the other hand, if you only photograph the entire Sun with a colour DSLR and maybe even work without stacking, you will benefit less from the filter, as only half of the camera's pixels are used. Here, the contrast gain is similar to the visual impression and depends on how strong the colour error of the telescope is.