This entry was posted on October 16, 2018 by Team Baader Planetarium 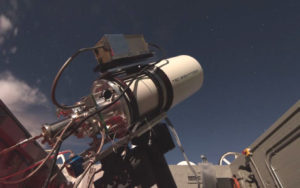 Wtih the TEC-VT 300mm / 7deg Widefield Houghton-Terebizh Telescope (#1351140 ) , TEC has created a unique instrument for sky surveillance. Thanks to the aperture ratio of f/1.44 and a flat image field of 52mm, large parts of the sky can be photographed very quickly in high resolution.

These special features are now used by a project on the famous Mt. Palomar in California, where a TEC VT 300 scans the northern starry sky every night in the infrared range completely as a mosaic. Thus one hopes to find changes, for example brightness fluctuations of stars, but also new objects like comets or asteroids. The last convulsions of dying stars are as much a goal of the observations as the short flash of light at the collision of neutron stars - and maybe some things you don't even think about yet. In the infrared you can penetrate the large dust clouds in the galaxy and make objects visible that are hiding in them. As is so often the case, a new telescope design allows a new view of the sky.

By creating a realtime mosaic of the northern sky every night, we`ll pick up lots of fascinationg objects and dramatic events, such es the final throes of dying stars obscured by dust, and detection of some of the oldest stars inour galaxy.