This entry was posted on July 8, 2020 by Christoph Kaltseis 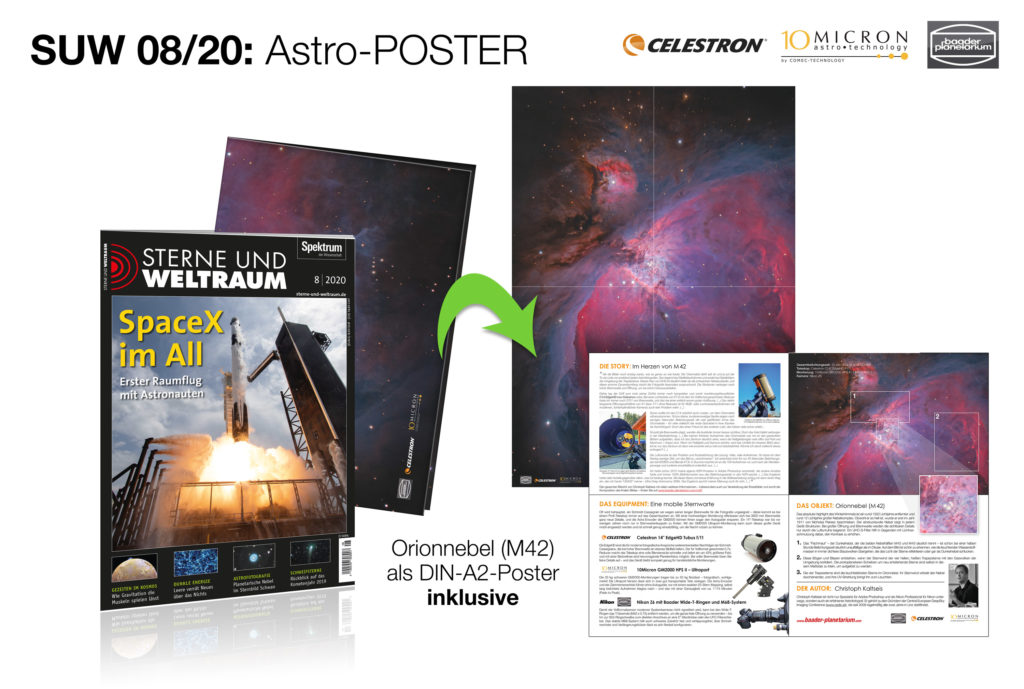 Don't miss it! Buy the current issue of the german Astro-Magazine "Sterne- und Weltraum" (SUW 05/20) at www.sterne-und-weltraum.de, to get the M42 Astro-Poster.

THE STORY: In the Heart of M42

When we were still shooting on film, it was just like today: The Orion Nebula has always been on the most-wanted-list of practically every astrophotographer. This starts with wide field shots and ends with detailed images of the surroundings of the trapezoid stars in the heart of M42. This region of M42 is much brighter than the faint surroundings, and this enormous dynamic range makes photography especially tricky. The structures require a long focal length and a wide aperture to let them shine.

For my imaging I chose Celestron's C14 EdgeHD, which is still compact despite its size and therefore doesn't require an gigantic mount. At an f/ratio of f/7.6 with the special reducer designed for full-frame cameras, I still have a focal length of 2751 mm, and that with a really astonishing good resolution. With this combination, familiar objects look completely new – if the conditions are right, i.e. if the seeing is no problem. The relatively slow aperture ratio of ca. f/7 (or f/11 without reducer) is also no problem for RGB or luminescence shots with modern, light-sensitive cameras. 10Micron's GM2000 mount carries the large optics without any problems, even for photography.

Visually, the telescope is also fun. I am a fan of long focal lengths and the C14 has always been my dream telescope. 14" can simply show more: In ideal nights, you can see a greenish shimmer in M42, and maybe even a little red in addition – and that through an eyepiece, not on a photograph! The C14 amazes me every time, with deep sky as well as with the moon. An absolute highlight is a bino-viewer pointed at the moon or the big gas giants Jupiter and Saturn. The Morpheus eyepieces with 17.5mm, 14mm and 12.5mm focal length are also extremely great in combination with a MaxBright Bino (I still have the first version). Here the brain does the work of an adaptive optics and the image is incredibly three-dimensional! 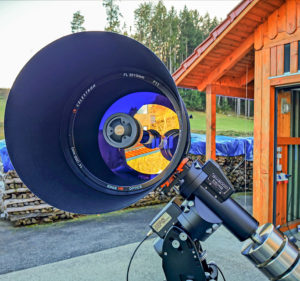 Compact 14": The C14 is a popular telescope because of its design. As an EdgeHD, it is optimized for photography.

I really appreciate the EdgeHD's wide range of applications and uses. It can be modified in just a few steps, so that I can do something totally different, be it photographic or visual. For this I use the Baader M68 system. Compared to the normal Schmidt-Cassegrain, the EdgeHD is better optimized for photography and has a built-in corrector, so that the picture is flat and sharp up to the corners, without curvature of the image.

The closed tube protects the mirror surfaces from all dirt and environmental influences, so I never had to clean them. I clean the Schmidt corrector lens one or two times a year, especially after the winter and / or after the first heavy pollen flights. This is very easy and much more uncomplicated than cleaning the main mirror. The circulation of the air through the tube vents works well and I have had no problems with seeing inside of the tube so far. The stability of the adjustment is impeccable. I have never had any worries with it, but hard impacts should of course be avoided as with any optics.

The Celestron mirrors are top quality! A telescope and thousands of objects are waiting for you – with the camera or as a mobile telescope by car – it works both ways! 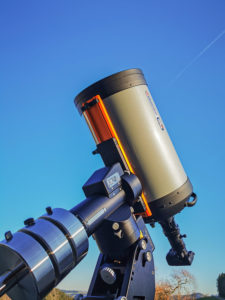 Perfection: The GM2000 from 10Micron carries the C14 EdgeHD without problems and is quickly assembled.

Therefore I really wanted to use the C14 to get closer to the Orion Nebula. Even small, short focal length optics already show the wide open arms of the Orion nebula after a few seconds exposure time - for many this is perhaps the first emission nebula in their career as astrophotographer. But one person's joy is another's sorrow, as many have already experienced...
As focal length and exposure time increase, the faint, extended structures become more and more visible. But the heart remains hidden in the overexposure center.

At the same time the desire to capture more and finer details grows. Here comes the change from "very simple" to "heavy and difficult". This is where I wanted to test an idea that had been in my head for a while.

There are a few classic solutions to the Orion problem, for example the use of narrow band filters for the core area, which reduce the brightness to a tolerable level and increase the contrast (details). Also, short exposures for the core and longer exposures for its fainter regions can be combined to capture the whole dynamic range. There are also HDR-/Wavelet-based software solutions, but they are rather gruesome (at least this is my subjective opinion).

In my earlier images of the Orion Nebula I noticed on the stacked images that I can clearly see the center when the brightness controls are wide open (set to zero and maximum = linear). When I increase brightness and gamma, the surroundings (in the linear image!) become clearer, only the center is much too bright and overexposed as expected. Could I maybe do something with that? 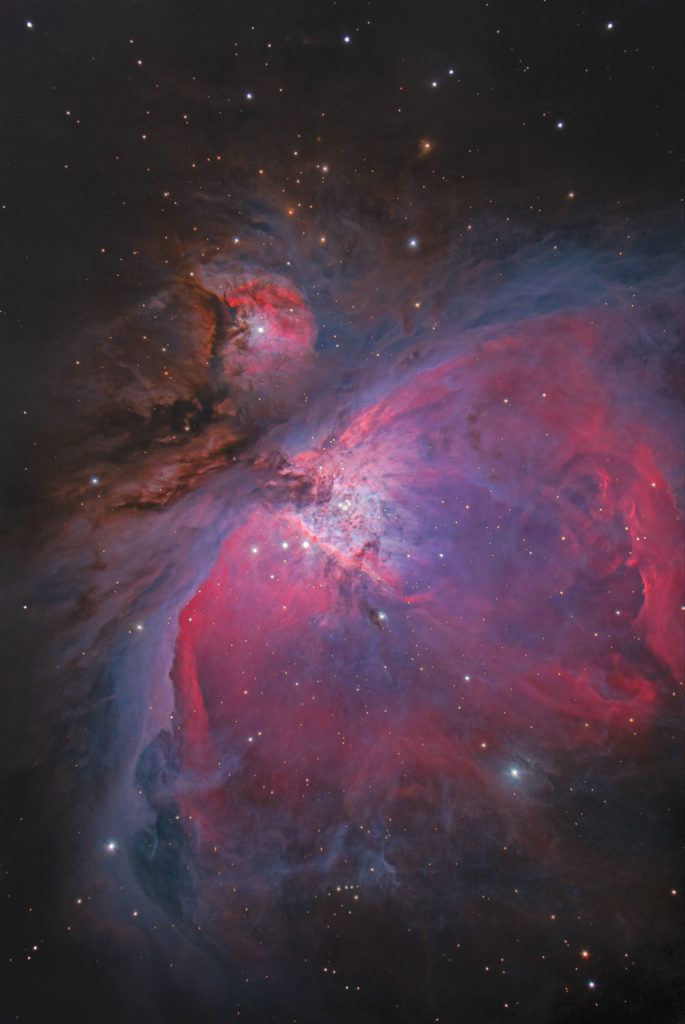 But simply photographing in the next clear night is not the way to go. Everybody should be aware that Orion is never really high in the sky in our latitudes. Its declination of -6° and a focal length of 2700mm are therefore a quite "adventurous" combination. It can't be used on every night when Orion is in the sky – there must be good seeing conditions!

Air turbulence is the problem and short exposure times are the solution: Take many, many shots. This way the seeing has less time to "smear" the picture. I decided to use an exposure time of only 45 seconds at ISO800 and f/7.6 in a night with good seeing. In total, I took about 100 shots before and after the meridian passage and sorted them out properly afterwards. Later on I will certainly reduce the exposure time even more, but at the moment the signal is a bit more important to me than another 100-500 exposures to chose from. As long as the camera delivers the necessary dynamic range – which the Nikon Z6 does without batting an eyelid – everything is fine and I can turn my idea into a picture.

So with the full memory card it's back to my computer. I had already developed my own HDR procedure in Adobe Photoshop in 2012, which had different approaches and always packed 100% image information from the exposure series into the HDR. For daylight I called it a UDI (Ultra Deep Image). The result had many advantages over everything I knew so far. With this basis and some experience in image processing I then took a path that I now call "UDA32" - Ultra Deep Astronomy 32Bit. The result was two versions of M42, a simple and a "crass" version, which really shows everything in the image, both good and less beautiful.

I cannot describe this image processing procedure in all details here. Too many intermediate steps and experiments were necessary for this result. And after I finished these procedures, I found a new software for 32Bit data, which might turn everything upside down again.

For sharpening I used my APF-R-Method, which I presented at the CEDIC 2017 (www.cedic.at/apfr). The APF-Redbook 2020 is based on it - but I show this method only at workshops, together with UDA32.

THE EQUIPMENT: A mobile Observatory

It is often claimed that a Schmidt-Cassegrain is unsuitable for deep-sky-photography because of its long focal length - but with a professional telescope, it is the overall system which counts. With a high-quality mount, completely new details reveal themselves at 3900 mm focal length, and the axis encoders of the GM2000 can even spare you the autoguider. Until a few years ago, a 14" telescope was only found in observatory domes. With the GM2000 Ultraport mount (successor model GM2000 HPS II COMBI coming soon), even this large telescope can be used for a mobile setup and is ready to use quite fast. 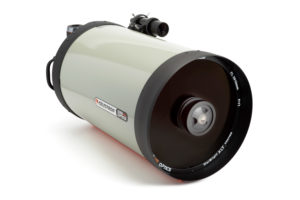 The EdgeHD are the successors of the Schmidt-Cassegrains, which have been further optimised for modern photographic requirements and provide a flat image field at a high focal length. The 0.7x reducer, designed for full frame camera sensors, makes the telescope a full f-stop faster and provides a 43% larger field, and with a barlow lens, excellent planetary photos are possible. At full focal length, you can resolve fine details – and the unit remains compact enough for standard mounts. 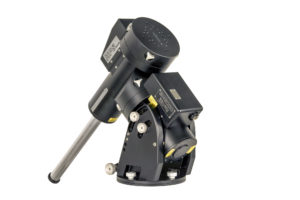 The 33 kg GM 2000 mount carries up to 50 kg payload – photographically, of course! The Ultraport version (as well as the successor model: GM2000 HPS II COMBI – available soon) can be disassembled into two parts for easy transport. The axis encoders and the toothed belt drive track even long exposed pictures without autoguider, only with an exact pointing model – and that with an accuracy of approx. 1"/15 minutes (peak-to-peak). 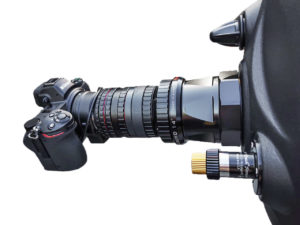 In order to avoid vignetting of the full frame sensor of modern system cameras, the T thread (M42 x 0.75) on the Wide-T rings can be removed to use the entire free aperture – up to the S52 ring dovetail for direct connection to a 2" nosepiece or the UFC filter slider. The heavy-duty M68 system holds even heavy accessories firmly and without tilting; it can be flexibly configured using quick-couplers and extension sleeves.