This entry was posted on January 14, 2020 by Christoph Kaltseis 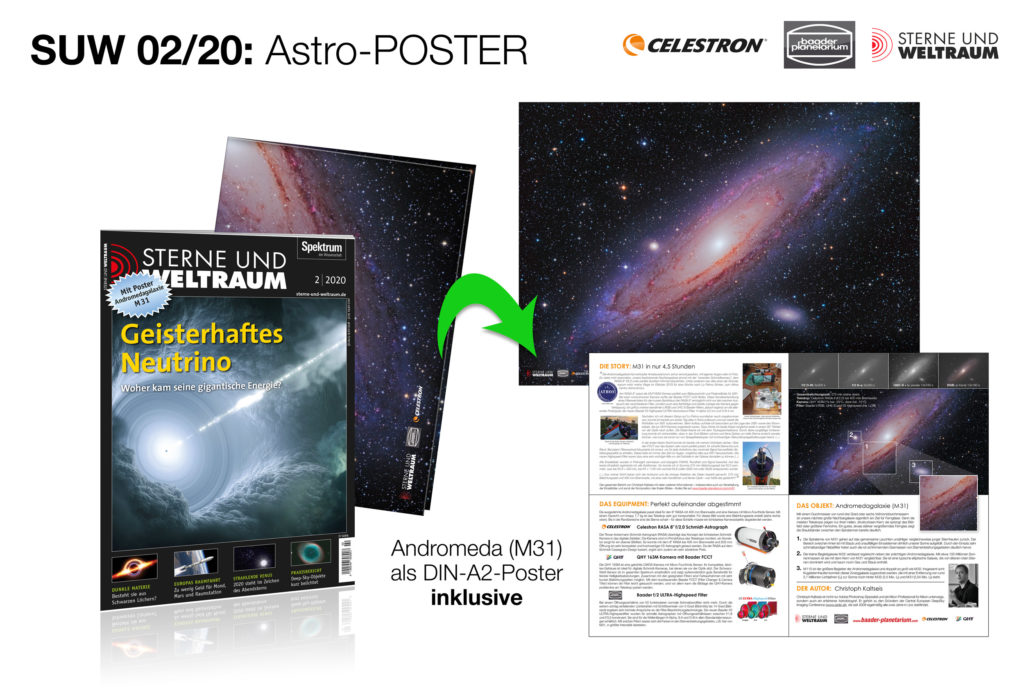 Don't miss it! Buy the current issue of the german Astro-Magazine "Sterne- und Weltraum" (SUW 02/20) at a local store or at www.sterne-und-weltraum.de to get the M31 Astro-Poster.

THE STORY: An M31 that fell from the sky

The Andromeda galaxy is an object seen by every amateur astronomer, either with own eyes or as an image. I was particularly fascinated to image our magnificent neighboring galaxy with the RASA 8" - Rowe-Ackermann Schmidt Astrograph (#822252, € 2195,-) under a perfectly dark sky. This was one of the reasons why my way led me to La Palma for one week in October 2019, to do my images at the Athos Centro Astronómico (www.athos.org).

The QHY 163M camera is a perfect fit on the RASA 8" in terms of field size and pixel scale for M31. For a monochrome camera, the Baader FCCT (Filter Changer & Camera Tilter - see also the test report by Michael Jäger: RASA 8" Extreme) was a very important accessory. This special development of a filter changer for the short backfocus of the RASA 8" not only allows a quick exchange of the different filters, but also a sensitive and stable adjustment of the camera against tilting. I used my proven LRGB and UHC-S Baader filters, but added the very first prototypes of the upcoming new Baader f/2 ULTRA-Highspeed Narrowband Filters. 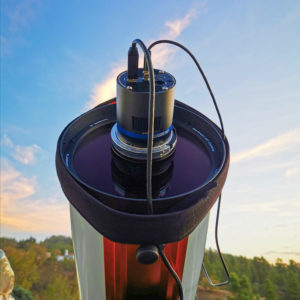 Final preparations: Every optical surface must be clean for the highest possible contrast

After arriving with this instrumentation on La Palma, I was able to set up everything on the first day and was ready to take the raw images of M31. During the setup I paid special attention to the position of the USB- as well as the power cable, which were connected to the QHY-camera. Therefore I led both cables as exactly as possible in a 90° angle in front of the optics to the outside. I fixed the cables with the dew cap heating tape. By this careful preparation I was able to ensure that in the final images beautiful and fine spikes around bright stars could be achieved, which are otherwise only known from reflecting telescopes with high-quality secondary mirror spiders.

In the first clear night I could already start with my project. Via the FCCT the system was perfectly adjusted very quickly, for sharp stars right to all four edges. With every filter change I focused again to get the maximum signal with perfect image quality for every shot. My goal was always to get the most out of M31. The new ULTRA Highspeed filters (coming soon) were a very important help for this, to be able to display the depth of color in the galaxy.

For the exposures in Luminance, UHC-S, R, G and B I chose a single exposure time of only 180 seconds each, due to the extremely fast aperture ratio of f/2 - despite the exceptionally dark night sky on La Palma. For the H-alpha and O-III data I exposed 300 seconds each. 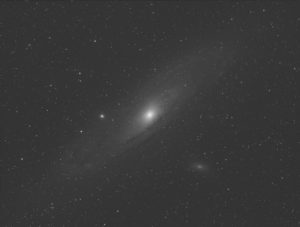 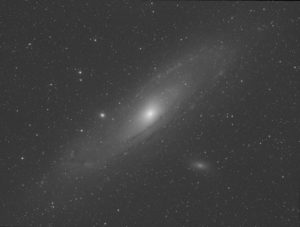 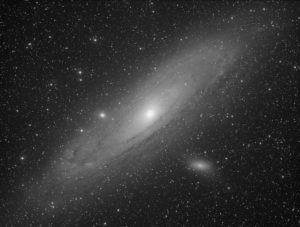 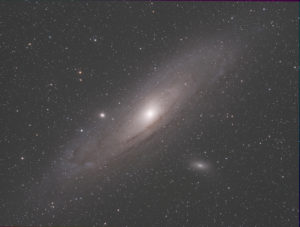 However, nature did not quite agree with my plan. The following days and nights were marked by clouds and rain, which was very good for the island after a hot, dry summer, but it caused me long waiting hours. This weather is quite normal for this time of the year - this was already clear to me when I planned the trip at the end of October. My hope was that I would be granted at least a few clear nights. 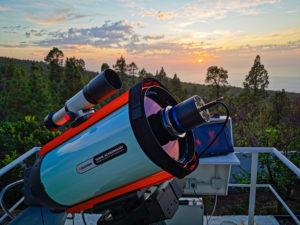 Ready for the night: Camera, heating tape and autoguider at the telescope.

But only when my one-week stay on La Palma was already coming to an end, a very good night followed. The seeing was above expectations and the transparency was only slightly affected by a very light Calima.

The fast RASA 8 made it possible for me to insert all missing filters in one night or to improve the pictures from the first night. To understand: with an aperture ratio of (e.g.) f/5.6 I would have needed 36 hours of exposure time - and every night on the island would have had to be equally good...

All data was processed with dark and bias. I refrained from using flats, because preliminary tests had already shown that an extraordinarily good illumination could be achieved with the chosen setup.

After I had integrated the data for each filter into a sum image, I was able to examine the averaged images in advance. The 3.5nm H-alpha data showed a ring and single HII regions in the M31 galaxy, clear and sharply resolved, and this at only 400mm focal length! The O-III data, however, did not show any special features. 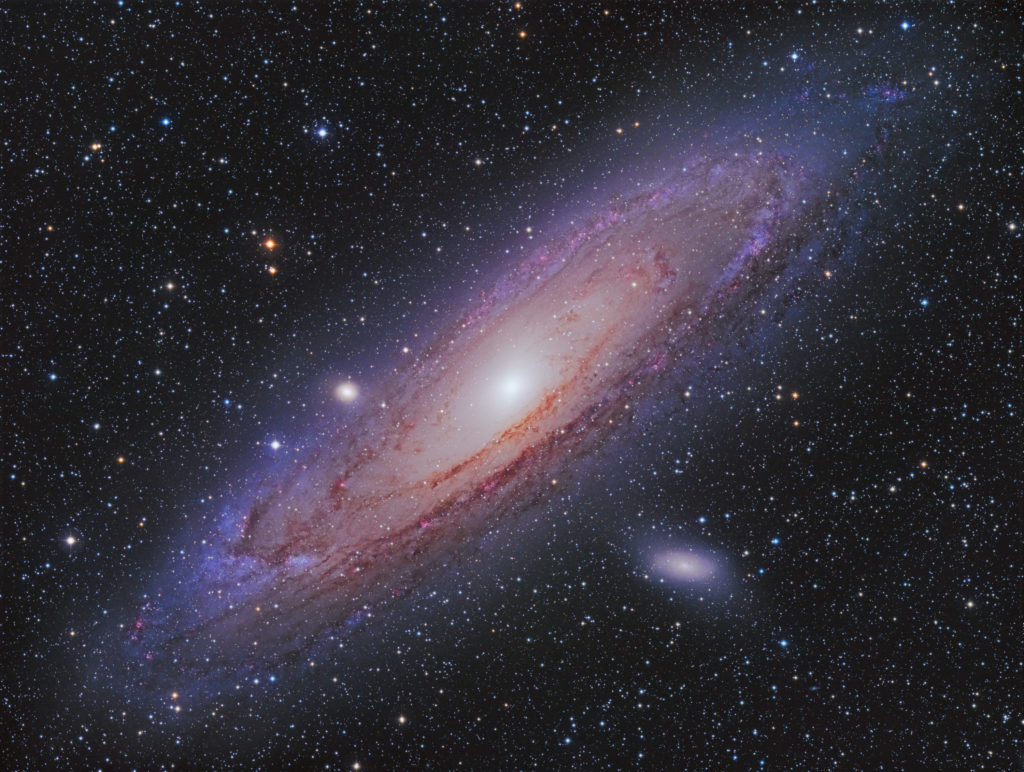 During image processing I first merged the averaged luminance image with the averaged UHC-S image. These two images formed the basis for an enormous depth. The RGB data were calculated into a color sum image and color calibrated (with GAIA + APASS).

Then I merged the luminance and UHC-S data with the RGB data in Adobe Photoshop without any loss of depth or color information. In this image I then embedded the H-Alpha signal into the red channel in such a way that it matched the R. I proceeded in the same way with green channel and the O-III signal.

The balance in depth and the reproduction of the narrow band data was very important and could be done with some knowledge. After that I had a deep recording of M31, which combines UHC-S + Luminance + R + H-alpha + G + O-III + B.

With this I almost finished my M31 shot in Photoshop, and now the final touch was made. To make the very bright center look natural, I overlaid the image with the H-alpha data. That was extremely delicate! But I am more than satisfied with the result, because a lot of details could be brought out at only 400mm focal length.

From my point of view the effort and the strict selection of the data paid off. 275 min exposure time and 400mm focal length, with a very handy and absolutely focus-stable lens – who would have thought this before?!

The vast Andromeda galaxy is ideal for the RASA 8" with 400 mm focal length and a camera with Micro-Fourthirds sensor. With a weight of almost 7.7 kg the telescope is very easy to transport. For this picture an exposure series was made (see above). The stars are sharp up to the edges - for this amount of sharpness a fast camera lens would have to be stopped down. 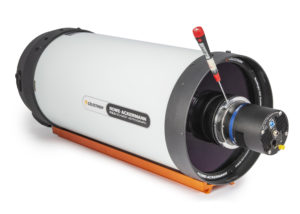 The RASA 8 transfers the concept of the fast Schmidt-Camera into the digital age: The camera is mounted at the primary focus of the telescope, a corrector ensures a flat field of view. Thus, with the 8" RASA at 400 mm focal length and 203 mm aperture a very compact and high-quality f/2 astrograph could be built. Since the RASA is based on the Schmidt-Cassegrain design, the price is also very attractive. 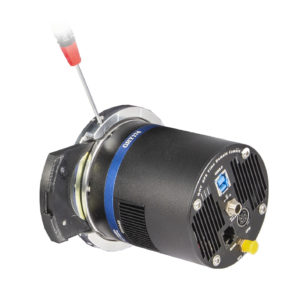 The QHY 163M is a cooled CMOS camera with Micro-Fourthirds Sensor. Its compact, lightweight housing is ideal for digital Schmidt cameras where it sits in front of the lens. The monochrome sensor is sensitive across the entire spectrum and shows exceptionally good sensitivity for the finest brightness gradations. Together with the appropriate filters, colour photos with very short exposure times are possible. With the soon available short Baader FCCT (Filter Changer & Camera Tilter) the filters can easily be exchanged and above all the image position of the QHY camera can be adjusted on the fly from the side, while mounted at the telescope, without any problems. 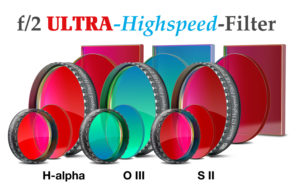 At an aperture ratio of f/2, normal narrow-band filters no longer work. Due to the extremely oblique incident light cone, with entrance angles of 0 degrees (image center) to 14 degrees (image edge), the filter coating technology is at its very limit. The upcoming new Baader f/2 ULTRA-Highspeed filters are designed for fast astrographs with aperture ratios between f/1.8 and f/3.5. They will become available for the wavelengths H-Alpha, S-II and O-III in all standard dimensions. With such filters the colors in the star forming regions, e.g. here of M31, can be displayed without any vignetting and with full S/N-ratio..