This entry was posted on February 13, 2019 by Michael Risch 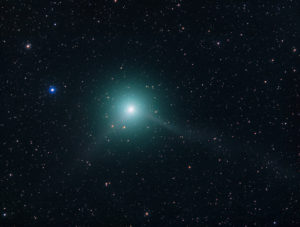 One more fine comet for binoculars

As soon as comet Wirtanen has gone on distance to Earth, C/2018 Y1 Iwamoto enters the stage. It passes through the constellations of Leo, Cancer and Gemini and is currently visible all night long. The comet Iwamoto is just below the limit of perceptibility with the naked eye, and a small pair of binoculars will easily show it. It is an ideal target for astrophotographers. Unfortunately, the waxing moon will increase in brightness in the next few days, and in March the comet will be much darker again. In order to see Iwamoto still nicely and to take a photo, we have to hurry. 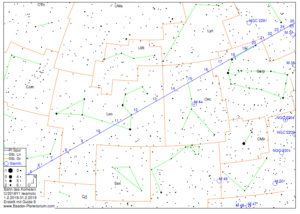 Its orbit is similar to that of the comet Wirtanen: Iwamoto, too, comes close to the Earth when it is nearest to the Sun and yet always remains outside the Earth's orbit. We see it as quite big, round gas ball, about half as big as the full moon. It doesn't show a visible tail to the eye, but in photos taken under a very dark, clear sky two tails can be seen, which are at an angle of more than 90 degrees to each other. The pictures by Michael Jäger with the RASA 8" show this interesting tail configuration, which can only be seen if you look at a comet from the front. 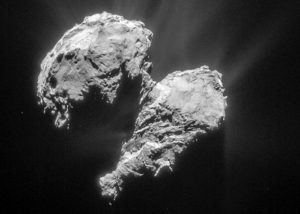 The core of comet 67P/Tschurionow Gerassimenko, size: approx. 3.5x4km. Taken by the European space probe "Rosetta". The surface was changed by the melting processes during the many solar passages. Image source: ESA

A visitor from the solar system's "fridge"

These pictures are all the more fascinating when you know what you are  actually looking at here. The green cloud is formed by gas that originates from a relatively small comet nucleus of ice and dust when it approaches and warms up to the Sun during its journey through the solar system. The core itself inside the cloud is hidden from our eyes and only one to two kilometres in size. Comet nuclei have already been visited by space probes, most recently the European space probe "Rosetta" which took fascinating close-ups of comet "Tschuri".

Here we look at primeval matter from the early days of the solar system, more than four billion years old. Since then, they have been stored in two large reservoirs, the so-called "Kuiper Belt", which begins behind Neptune, and the "Oort cloud", which is much further outside. When we visit an active, periodic comet with a space probe, however, it is already changed by many sun passages. It is much more interesting scientifically to visit a very original, unchanged object from the early days of the solar system with a spacecraft - and we succeeded at the beginning of this month.

New Horizons, Ultima Thule and the Connection to Comets

The orbital period of comet Iwamoto of 1371 years indicates an origin outside of the Kuiper belt, from the regions of the "Transneptunian Objects", i.e. even further outside than Neptune. There, the primeval matter is preserved unchanged in the cold, from which everything originated: the planets, asteroids, moons and comets. 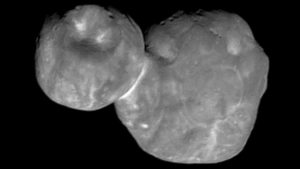 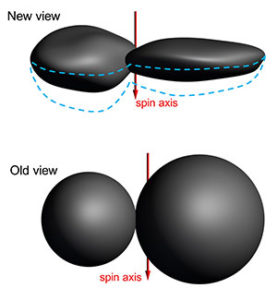 The space probe "New Horizons" of NASA, which sent the first close-ups of Pluto three years ago (after 10 years of travel time), is moving in these regions and has now obtained for the first time pictures and data of such an object, which is temporarily called "Ultima Thule". Unfortunately the transmission of all photos and data will still take about 20 months - due to the long distance, the data rate is very low. However, the first photos have already caused some surprises. Ultima Thule is "composed" of two objects. One is flat like a pancake and the other resembles a dented walnut. How such forms arise and what the two bodies are made of exactly, these questions will keep many scientists busy for years to come. The next months will be exciting: bit by bit the photos and measurement results will be published and our knowledge about the beginnings of the solar system and our own origins will expand.