This entry was posted on July 28, 2022 by Team Baader Planetarium

March 2021: The idea behind the visual use of blue filters from RGB palettes is that they have much higher transmittances in the blue value and steeper curve slopes than the usual blue filters known from planetary observation - e.g. the Wratten 80A/B/C filters or also Baader's dark blue 435nm and light blue 470nm filters. A CCD or CMOS blue filter allows much more light of the blue reflection nebulae of our galaxy to reach the eye and at the same time filters out the stray light in the green and yellow very effectively. 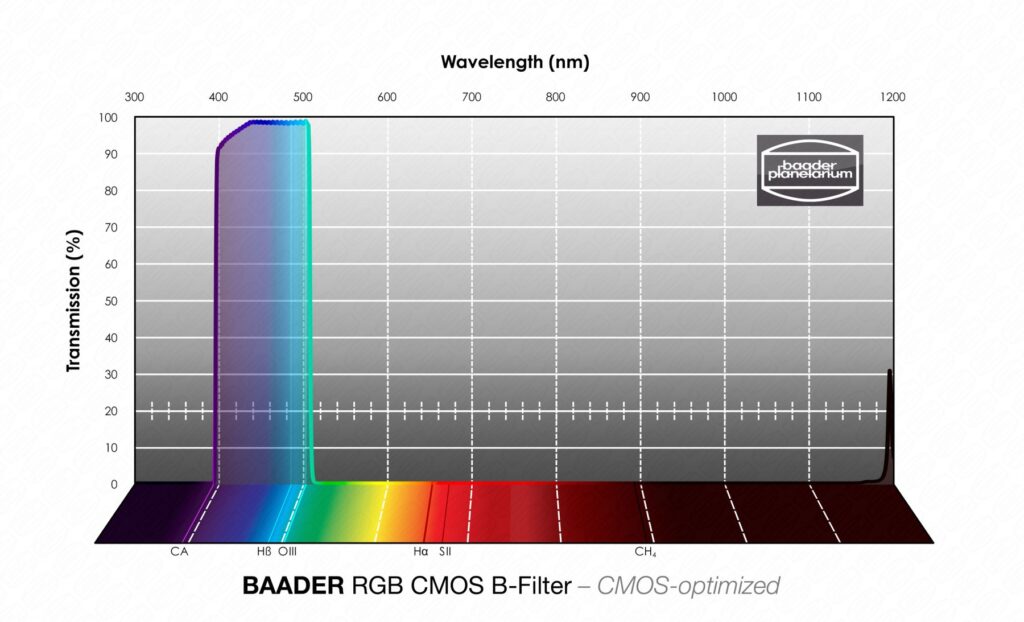 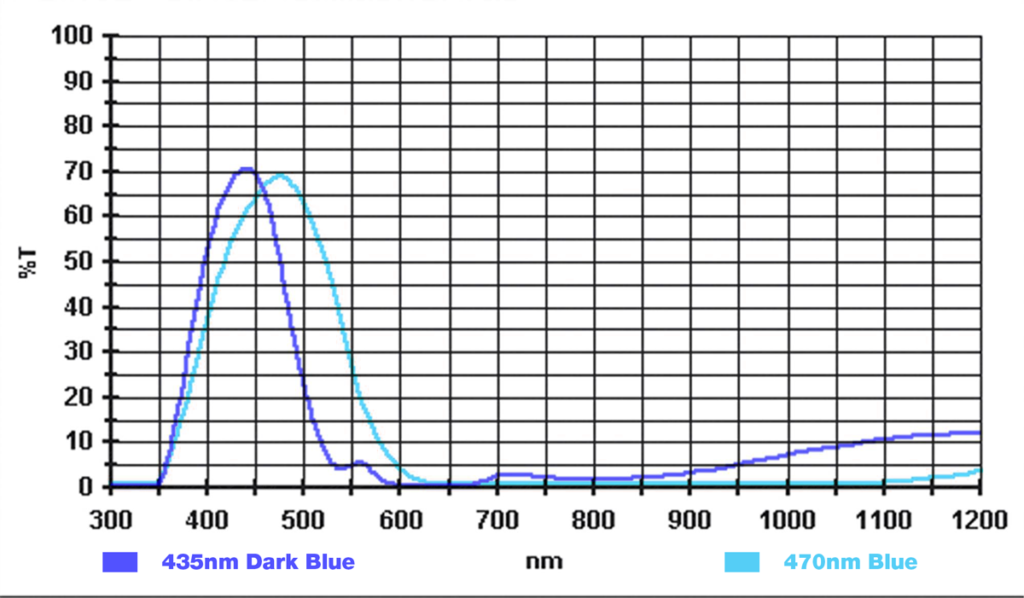 Based on these considerations, soon after the release of their new CMOS filter range, I asked Baader Planetarium if they would lend me a CMOS blue filter Baader RGB B-Filter – CMOS-optimized (various versions available) in all visually usable formats:

I was preaching to the choir, because Baader was very interested in the visual possibilities of these filters. Within a few days I received a bulging package 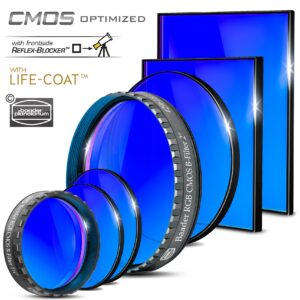 Especially for the Pleiades nebulosity I had high hopes for the blue filters. So I used a moonless night at the end of February 2022 to compare the filters on the Merope Nebula and Maja Nebula. The sky quality was FST 5m0 - a typical suburban value. A Cassegrain telescope with 180mm aperture and 2400mm focal length with a 2-inch filter wheel in front of the zenith mirror was used.

Over the years, the Baader 36mm Hyperion Aspheric 2" Eyepiece (#2454636 , € 205,- ) has emerged as the first choice for nebula observation because of its excellent transmission in combination with a large field of view and pleasant viewing behavior in my experience . With this eyepiece, a magnification of 67x and a field of view of just over 1° was obtained on the Cassegrain. 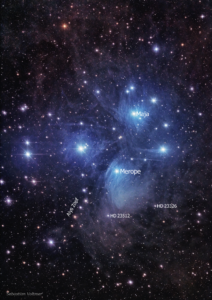 The observations in detail (The labels are inserted by me. North is on top, East on the left.):

-Unfiltered: There is a visual unrest in the whole area of the Pleiades. I attribute this more to glare from the many bright stars than to the nebulae.

-Baader UHC-S: This filter reduces the glare. Now in the triangle between Merope and the two 8mag stars southwest (HD 23326) and south (HD 23512) a nebulosity can be seen, which is missing in the area east of the Ally's Braid star chain (marked in German as Alys Zopf in the photo): thus at least a clear sighting!

-Baader CCD Blue: Now the eastern edge and the southern edge (the "Hood") of the Meropenebula are more clearly set off than with UHC-S. The western edge of the Meropene Nebula remains pretty unclear. A faint hint of the nebula south of Maja appears.

-Baader CMOS Blue: Now the Meropene Nebula is well set off, also to the west. The background of the sky is darker than with Baader CCD Blue, at the same time the star depth is a bit larger. The Maja Nebula is clearly visible over approximately 4' to the southwest away from Maja.

This drawing was made in January 2020 by Mathias Sawo without filter using a 12.5-inch telescope at 90x in the Chilean Andes at very good transparency, with Running Man almost at zenith. The labels A to G are inserted by me. North is top-right, east top-left. 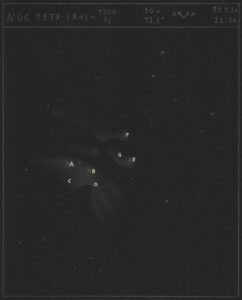 -Unfiltered: stars A and B each have a nebulous halo to the south, these halos are not connected. A nebular halo is clearly discernible around star E (actually a pair of stars, but I don't see the northern companion), and a nebular halo at the perceptual limit around star pair F.

-Baader UHC-S: The nebulae around A and B are now more clearly separated from the surroundings and connected. The nebula around E is present, that around F is no longer visible.

-Baader CCD Blue: The southern nebula part at A and B is now connected and reaches almost to star C. The nebula around E seems to have a small extension towards star G and the nebula around F is visible.

-Baader CMOS Blue: All nebula parts are again better separated compared to the image with Baader CCD Blue. The background of the sky is darker. The southern part of the nebula still reaches C and even slightly beyond D. The extension from E to G is more distinct than with CCD Blue.

The gain of the blue filters over both unfiltered and Baader UHC-S / L-Booster-Filter (various versions available) was substantial at Running Man Nebula this night. Among the two blue filters, again, the advantage of the CMOS filter was subtle but clear. Stars at the perceptual limit were easier to hold, the sky background darker, and the overall image richer in contrast. Star B took on a strong aquamarine coloration with the CMOS filter and appeared so bright that it almost outshone the nebula – an interesting effect that did not occur with the other filters.

The differences between the filters at the Pleiades nebulosity were also clear. It is often read that a UHC filter does not help with the reflection nebulae. Apparently, however, the transmission window of the Baader UHC-S extends far enough into the blue while maintaining very high transmission to certainly allow detection of the brightest reflection nebulae.

Mr. Hay is a visual observing amateur astronomer and co-author of the Beobachteratlas für Kurzentschlossene (BAfK). At www.freunde-der-nacht.net, Mr. Hay reports on other successful observations with the CMOS blue filter in the section "Filter Experiment - Blue Filter".

However, it was the CCD/CMOS blue filters that provided a really big gain on the Pleiades nebulosity as well as on the Running Man. It is interesting to note the further gain of the new CMOS filter over the old CCD filter despite very similar looking transmission curves. Apparently, the performance of a filter is determined by complex features that cannot be simply determined from the transmission curve. In any case, I consider the Baader CMOS blue filter to be a real asset to the visual observer's filter kit.