This entry was posted on August 2, 2022 by Team Baader Planetarium 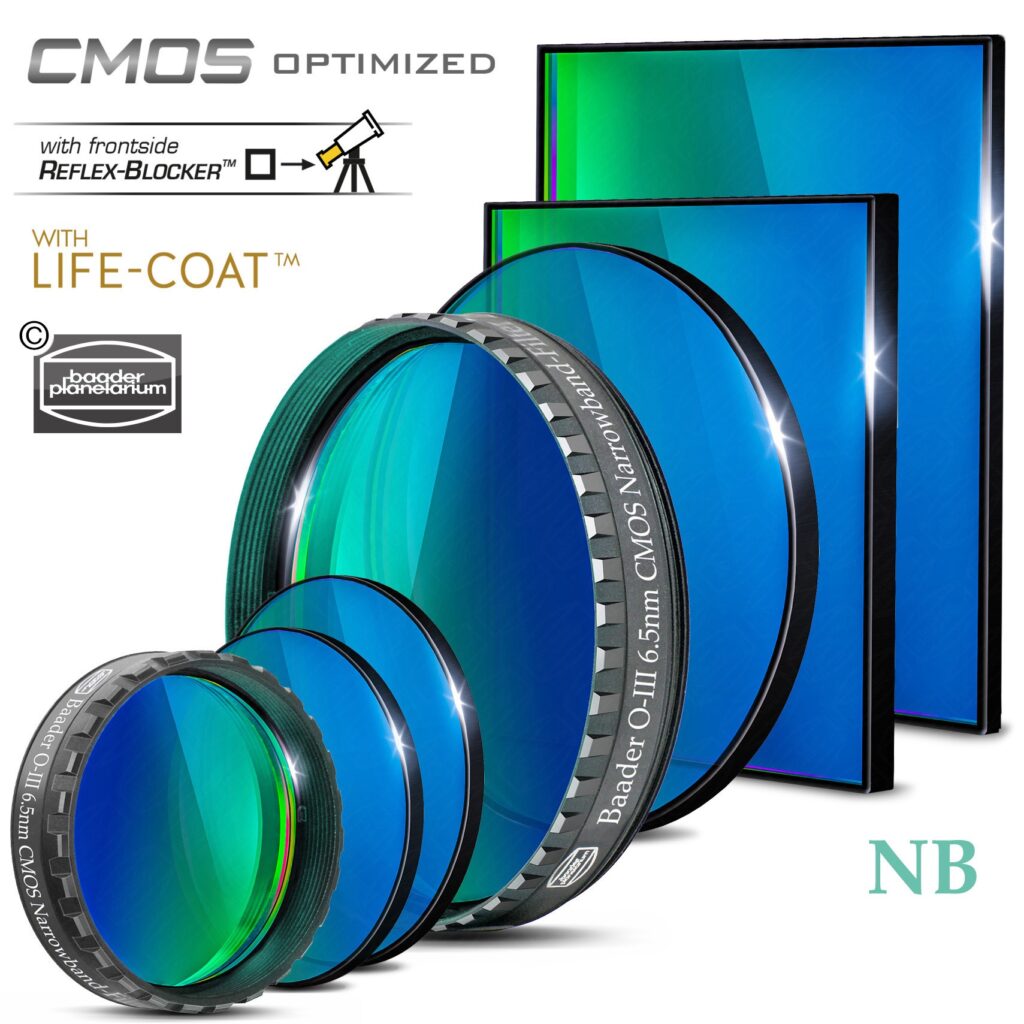 In contrast to H-Beta (see the blog post on the 5.5nm H-Beta filter), there have long been options on the market for OIII filters that go beyond the filters marketed as "visual". While the "visual" OIII filters feature half-widths of 12nm and 10nm, respectively, the photographic OIII filters range down to 3nm, which represents a significant contrast gain.

I have already had good visual experiences with the 8.5nm OIII CCD filter from Baader Planetarium in the past. When Baader introduced its Baader O-III Narrowband-Filters (6.5nm) – CMOS-optimized (various versions available) in the fall of 2021, I asked if I could borrow the new filter to explore its visual capabilities in observing galactic nebulae. To my delight, I then received the desired filter in both 1.25" and 2" screw mounts.

The purpose of narrow band CCD and CMOS filters is to improve the signal to noise ratio in the photograph. This gain occurs in visual observation as well - especially where there is a lot of noise in the form of light pollution, moonlight, or outshining stars in the field of view. In the following observation report, I give an example of how the 6.5nm filter can be used to wring a bouquet of nebulae from the moon.

On the night of February 7, 2022, the sky transparency was good, but the moon was half full in the transition from Aries to Taurus. This pushed the FST value to 4m5, meaning the faintest star visible to the naked eye had a magnitude of 4m5. I pointed a pair of 100mm binoculars at 23x first at the Rosette Nebula NGC 2237 in the constellation Unicorn, successively screwing the Baader UHC-S filter and three different types of OIII filters into the eyepieces in pairs. The observations in detail: 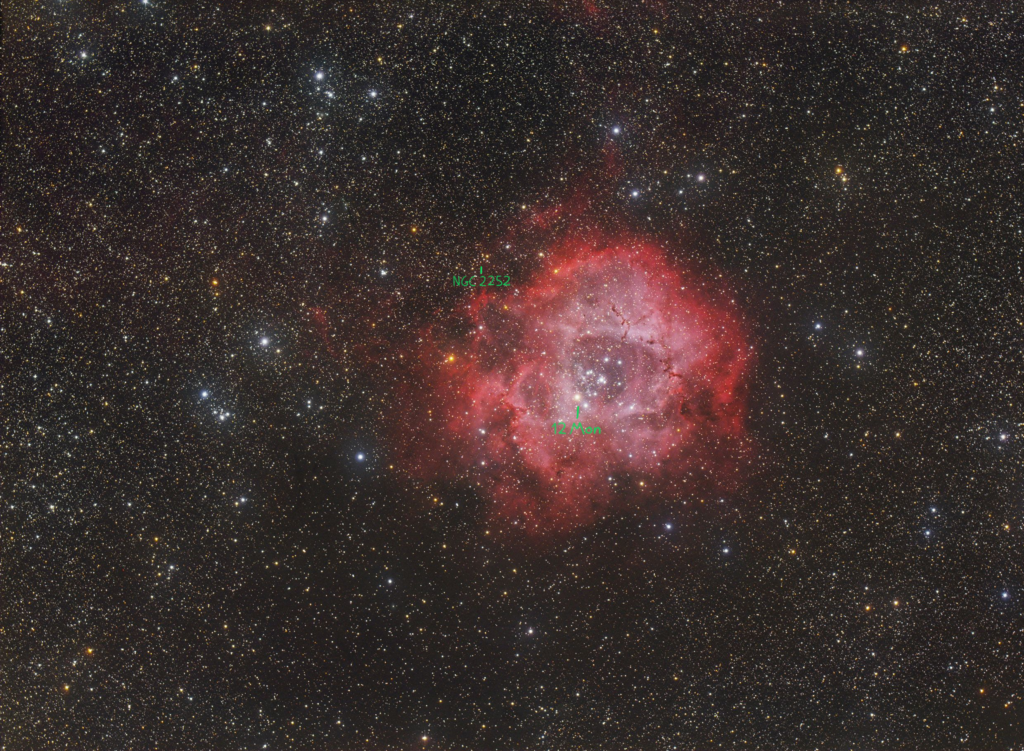 -Unfiltered: No nebula visible. The open star cluster NGC 2252, which is located directly northwest of the nebula, shows up as a glittering star condensation, which underlines the very good sky transparency.

-Baader UHC-S: The nebula cannot be detected with certainty. There is some unrest around the central cluster NGC 2244, but this is equally the case everywhere northeast of the cluster in a wide area.

-Baader OIII 10nm Visual: With this filter a restless nebulous ring can be seen around NGC 2244. The closer surroundings of the cluster are relatively dark. The ring is determinate enough to make out that 12 Mon (a foreground star, not a cluster member) stands at its inner southeastern margin.

-Baader OIII 8.5nm CCD: This filter provides a significant contrast gain compared to the 10nm filter. The nebular ring is now clearly visible. Additionally: it has a 15 to 20 arcminute bulge to the southeast.

-Baader OIII 6.5nm CMOS: When changing from 8.5nm to 6.5nm it takes some time until my eyes are adapted to the much darker image. It is worth it, because now the nebula ring is strong and very present. I see three brighter patches in the ring that I hadn't noticed with the 8.5nm filter.

Afterwards I turned 15° north to the Monkey Head Nebula NGC 2174, which is located in the constellation Orion but physically belongs to the association Gemini OB1. 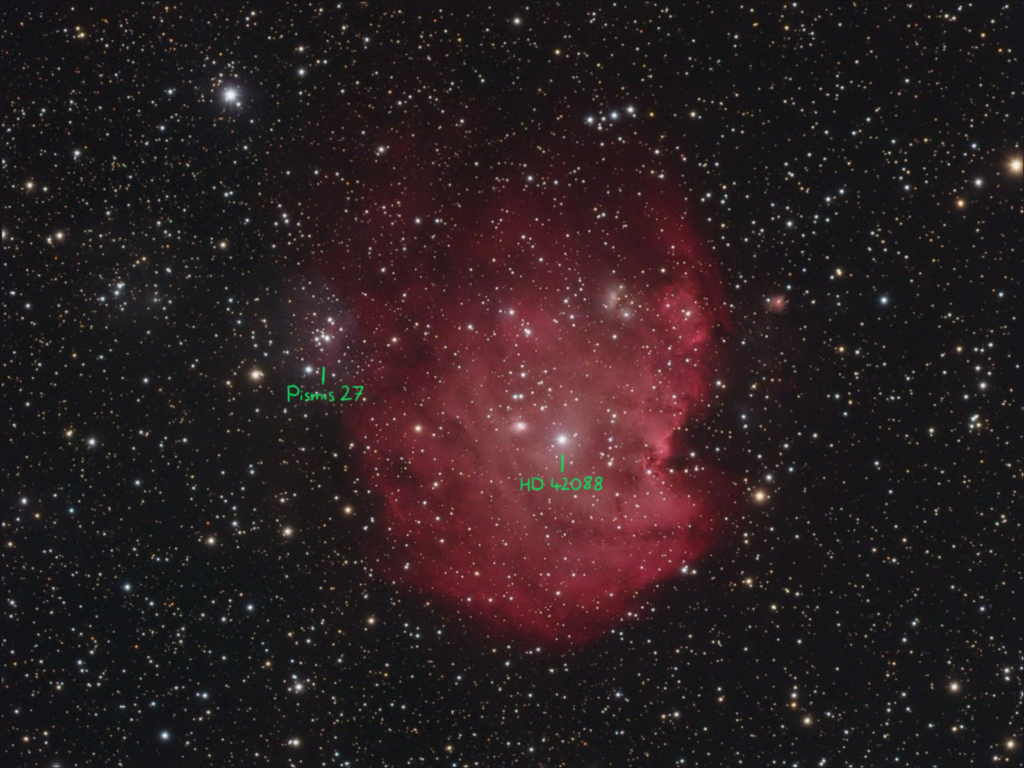 -Unfiltered: To estimate the sky transparency I first look for the open star cluster NGC 2158, which is located about 4° north of the Monkey Head Nebula in Gemini close to the star cluster Messier 35. NGC 2158 is clearly visible as an unresolved small cloud. Yes, the transparency is good! The Monkey Head Nebula is not visible without a filter. Pismis 27, a small cluster evolutionarily related to the nebula and located at its northeastern edge, is clearly visible as a compact group with half a dozen members.

-Baader UHC-S: With this filter I can still make out the open star cluster NGC 2158 in Gemini. This proves that the transmission of this type of filter is high. Sweeping back and forth in the target area reveals the Monkey Head Nebula NGC 2174 as a very faint nebula around the central star HD 42088 (7m6 visual magnitude and the nebula's main source of excitation).

-Baader OIII 10nm Visual: Now the Monkey Head Nebula is quite distinct and does not need field sweeping to be detected. I cannot perceive any particular shape.

-Baader OIII 8.5nm CCD: This filter provides a contrast gain compared to the 10nm filter. It appears to me, though somewhat uncertainly, as if I can see the brow of the monkey (i.e., the southwestern edge of the nebula).

-Baader OIII 6.5nm CMOS: The change from 8.5nm to 6.5nm provides a significant gain in contrast. Also noteworthy is that the star depth is barely reduced compared to the 8.5nm filter, even though the sky background is much darker. I can now clearly see the monkey's brow - very satisfying, this filter is worth it!

I summarize, that with increasingly narrower half-widths more nebulosity became visible, in an impressively clear way. The above observations took place under a sky that was considerably brightened by the half-full moon. It should not be inferred from this that the 6.5nm OIII filter is only gainful under brightened skies. On the contrary, I have used this filter repeatedly under darker skies with distinct visual gain.

Mr. Hay is a visual observing amateur astronomer and co-author of the "Beobachteratlas für Kurzentschlossene" (BAfK). This observing guide is available for free download at: www.freunde-der-nacht.net . There Mr. Hay reports (only in German) on other successful observations with the OII 6.5nm CMOS filter in the section "Filter Experiments - OIII".

Of course, there will be situations where the 8.5nm, 10nm filter or even a 12nm OIII filter of a competitor is advantageous. After all, no one would want to claim that a single eyepiece is optimal for all situations. However, it can be said that with the arrival of the Baader 6.5nm OIII filter, skywatchers have access to  a very narrow yet affordable OIII filter that will provide the critical visual contrast gain in many situations.

My thanks to Baader for their awareness of the potential visual performance of photographically designed narrowband filters, and for their willingness to let me borrow them, making it possible for me to explore this performance.