This entry was posted on September 6, 2019 by Team Celestron 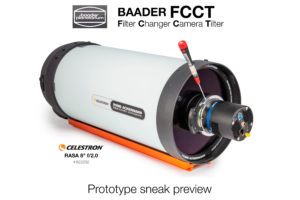 Especially for the RASA 8, we are developing the Baader FCCT a filter changer with tilting mechanism for the largest possible field of view.
The FCCT is now available!

Before the sales launch of new high-end telescopes, the first models go to experienced testers who check them for their possibilities and weaknesses. We asked Michael Jäger, one of the most successful comet hunters and photographers, to test the RASA 8" - Rowe-Ackermann Schmidt Astrograph. Such a fast telescope with short focal length and large field of view is perfect especially for sky surveillance.

Together with the telescope, Michael Jäger also received a filter changer which was fitted to the RASA 8: The 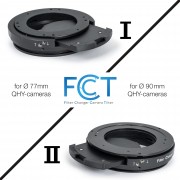 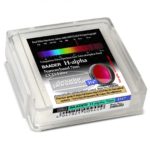 First tests with a 7 nm CCD H-alpha-Filter which he already owned produced images with sharp stars all over the field, without distortions, but the RGB-images showed some colour-shifting. Typical filters are designed for f-ratios of about f/4 and slower; such a fast astrograph like the RASA needs special filters like the f/2 Highspeed-Filters or the Ultra-Narrowband-filters, which can handle the wide angle of the incoming rays of light.

These filters were not yet available for his first tests, but the colour shift is no problem with a monochrome camera. Thus, Michael Jäger could easily create a mosaic of the North America Nebula (NGC 7000) and the Pelican Nebula (IC 5070/5067) with nine segments, each with exposure times of 30-40 minutes. All in all, he used an exposure time of five hours. All he needed to do to create the final image was simply rotate the single frames, so that they fittet together. 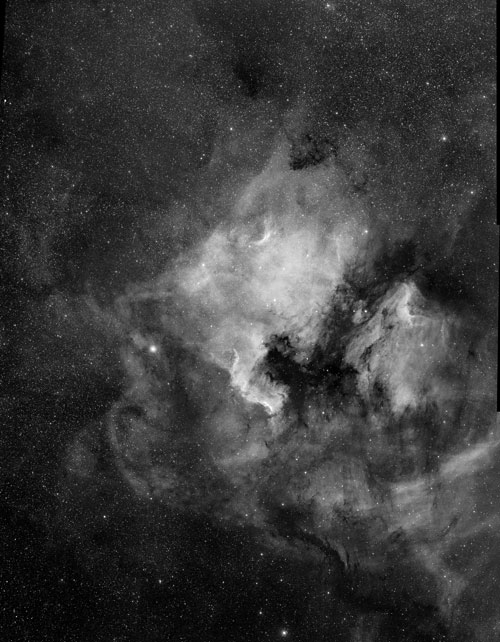 Not only the distortion-free field is impressive, which made it easy to combine the mosaic, but also the relatively short exposure time beause of f/2. A telescope with f/2.8 would need twice as long to gather the same amount of light, and f/4 would double the time again.

Too much theory? Just take a look at the image of the Pelican Nebula by Richard Galli on www.nightpixels.net. For this image, full twelve hours of gathering light were necessary – with a Apogee Alta U16000 and 3nm filter at a 300/2,8 camera lens which was stopped down to f/3.3.

Another smal experiment of Michael Jäger with the RASA 8: 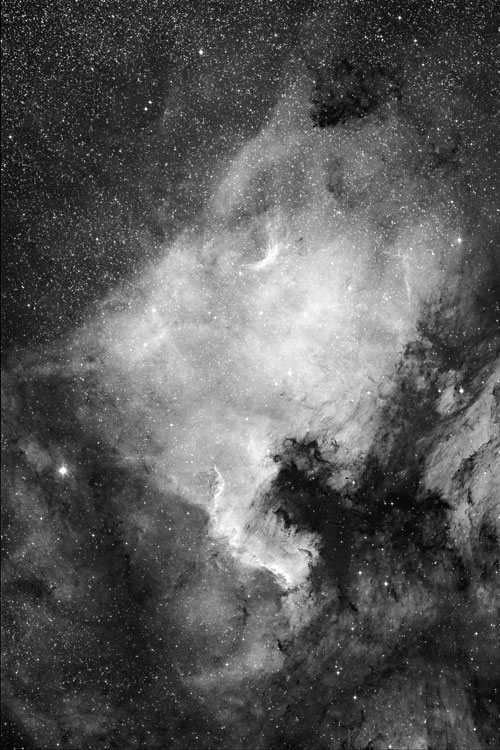 In front of the Schmidt corrector plate is a protective glass, which is held in place by small ring which is screwed on. Just for fun, I removed this ring and connected an old Sigma 6303 (10x10 cm body) with the help of this 2" thread. So, I could even use a filter changer.

The 27,5x17,5mm-sensor is not especially small and shows a field of 4x2,5 degrees when used with the RASA. It is a fact: The telescope provides an almost flat field with very little vignetting for an image circle of 25mm. Only when you leave this image circle, you see the effects of the smaller corrector.

After a rough collimation you can already estimate that the large field of view of this telescope can really be used completely.

So, even cameras with an APS-H sensor (28x18mm) should work, although only APS-C with 22,5x15mm is recommended. I was surprised that the stars didn't suffer too much from the large obstruction. 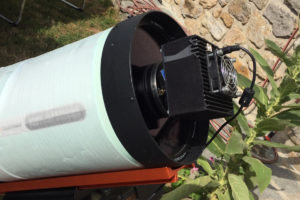 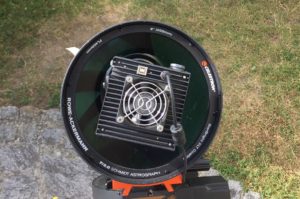 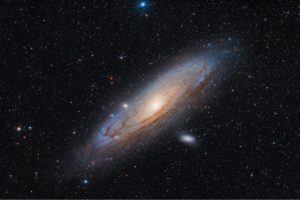 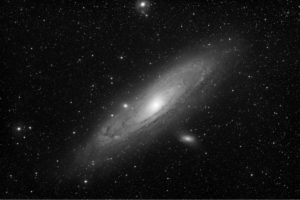 This way, the dust is toned down a bit, and the structures are better to see, although the focal length is quite short. The only problem is that the large camera body causes some halo around bright stars, which needs to be removed digitally. .

For this image I left some of the halo near the star at the top; in the original file it is quite bright

7 thoughts on “RASA 8-EXTREME: Images by Michael Jäger – with FCCT and f/2 Highspeed-Filter”