Cooled CMOS imaging cameras for astronomical use have come a long way over the last few years and they are here to stay. The QHY 268M PH, BSI Cooled Medium Size APS-C Camera (#1931096 , € 3000) camera has been hotly anticipated and has become a focus for a lot of astrophotographers for its high specifications, build and image quality. 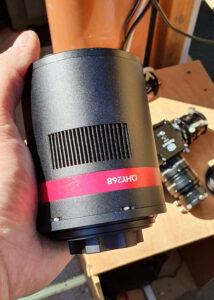 The QHY268M is a monochrome cooled CMOS camera that utilises a very sensitive APS-C sized Sony IMX571 sensor. Typical of other QHYCCD camera bodies, the 268M features a matt black cylindrical design with, in this case, a red colored band around the body at the sensor end with QHYCCD’s name and logo and the camera model – QHY268 – clearly labelled. The body is 90mm in diameter, just under 110mm in length and weighs just over ~850g without any other adaptors attached. The combination of the camera body's small diameter and its sensor and pixel size (see below) make this a good pairing with fast optical systems such as the Celestron RASA 11 or Hyperstar system. 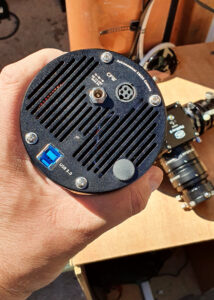 On the camera rear, there is the power socket which features a male screw-on thread connector meaning that when the supplied power cable from the AC-to-DC convertor is connected and threaded onto the connector it cannot be easily or accidently unplugged. There is also a high speed USB 3.0 port for data communication and a connection socket for operation of the QHY CFW 3 Filterwheel. The camera features a built-in anti-dew heater to avoid condensation and ice formation affecting the camera "view" and also a built-in humidity detector (output seen via software used to control the camera and TE cooling) in order to help you decide if desiccant use is required.

Various adaptors are supplied that are fitted to the "front end" to allow the camera to be attached to a wide range of telescopes or accessories. Looking into the front, the camera's 26 megapixel Sony IMX571 monochrome back illuminated CMOS sensor can be seen. A new design allows the sensor to be closer to the front with a back focus distance of only 12.5mm which can benefit setups using filterwheels and OAG's as well as camera lenses with filterwheels. For maximum light transmission and to minimize reflections the optical window has a multi-layer Anti-Reflection (AR) coating on both sides and the sensor's cover slip is AR coated too. 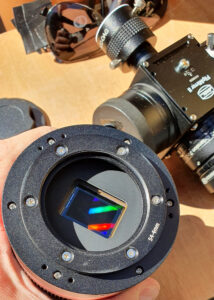 The IMX571 has a 28.3mm diagonal with 3.76-micron square pixels in a 6280x4210 pixel array and a quantum efficiency (QE) of ~90%. The sensor has an on-chip 16-bit ADC with real 16-bit output for high greyscale resolution (wide dynamic range) and it has very low read noise (<2e- at high gain) and, with the camera's 2-stage Thermo-Electric cooling, very low dark current (0.0005e/pixel/sec at -20c) and a full well capacity of well over 60ke-. This camera also features a new function: four selectable readout modes - Photographic, High Gain, Extended Full Well and Correlated Multi-Sampling - for imaging in different situations. 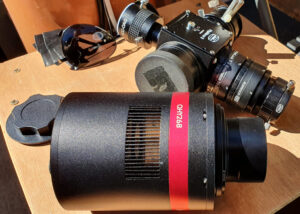 Side view with the 2" nosepiece attached

The camera has a 1GB DDR3 memory image buffer and with its USB3.0 connection can run at 6 frames per second frame rate at full resolution in its 16-bit mode. Furthermore there is ZERO amplifier glow to affect your images.

A Pro version of the mono camera is planned for later in the year that will have some additional features including 2x10 Gigabit optical fibre connection, timing interface for GPS and a larger 2 GB DDR3 image buffer memory.

Our customer's "first light" target with the 268M was the emission and reflection nebula IC405 - otherwise known as the Flaming Star Nebula (SH-2-229 and Caldwell 31) in the constellation of Auriga and lies ~1500 light years distant. The camera was attached to a Celestron RASA 11" with the Baader UFC system and a set of 2" prototype Baader CMOS-optimized Ultra-Highspeed filters (H-alpha version being used for this first light set of images). The images were taken near a large city under Bortle 7 skies.

QHYCCD provide an all-in-one driver which is an improvement over driver offerings from a few years ago which is much easier to manage and contains drivers for nearly all QHY's products. For the QHY268M, the all in one driver contains the system driver and ASCOM driver. The camera connected to N.I.N.A without issue and gain and offset were easily set, as well as the photographic mode. Cooling worked flawlessly with the camera easily reaching the target temperature of -15C. 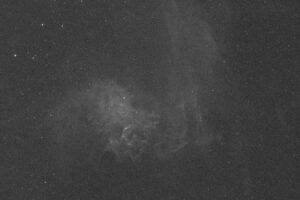 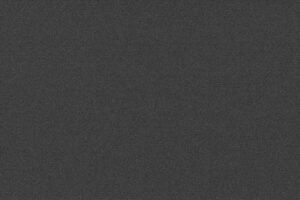 A single 120 sec dark frame. Note: there is no amplifier glow

An example of individual dark and light frames are given with each being of 120 second exposure time.

The QHY268M was set at a gain of 56 with an offset of 56 in readout mode 0 which is the default photographic mode and is good for most imaging scenarios.

The image below is the final stacked image with a cropped zoomed in view underneath. It is composed from a stack of 124 x 120s sub-exposures, with very minimal processing. Darks were used to calibrate the flats and lights. Using PixInsight, some mure denoise, histogram stretch based upon STF, and some slight contract enhancement. The images show the very detailed and delicate structure of this emission and reflection nebula. 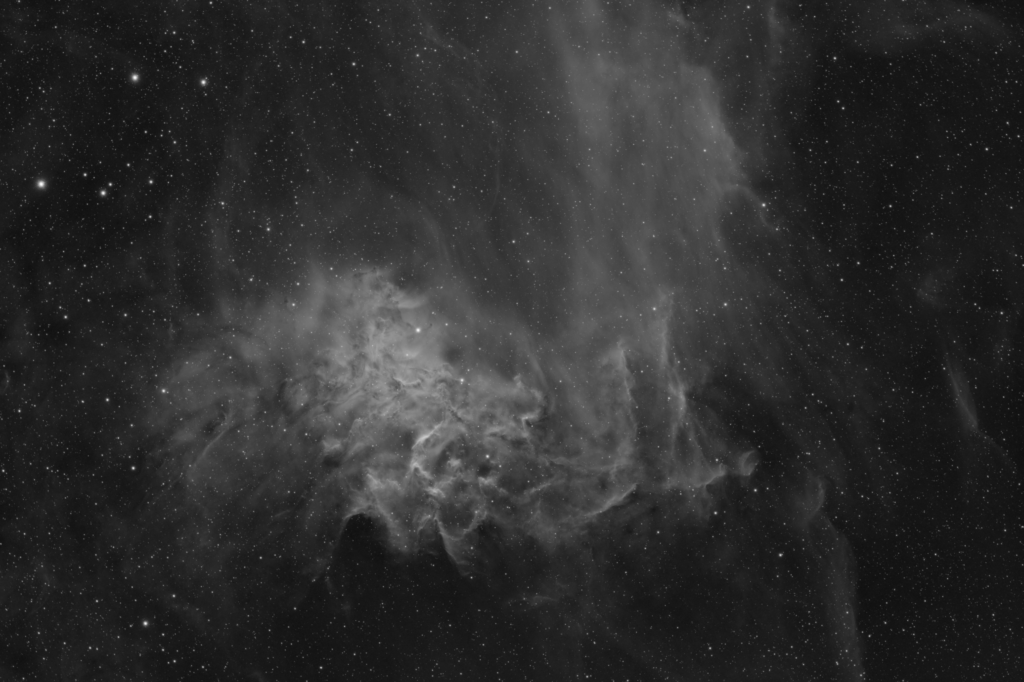 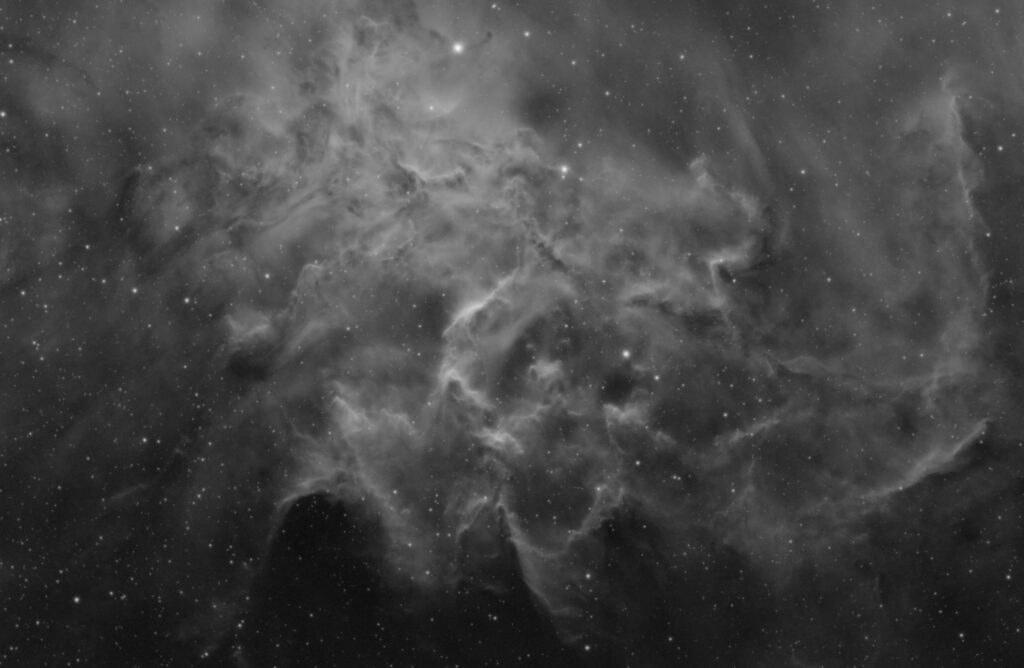 A cropped view of the central brighter portion of the nebula. 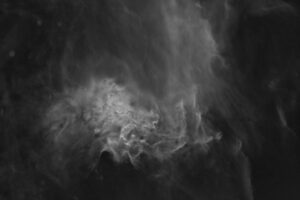 IC405 with stars removed to enhance the nebula's presence. 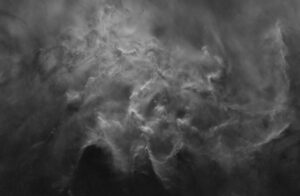 Starless version of the cropped image above

The images (left and right) are the full frame and cropped versions of the images above but with their stars removed (using the Straton image processing application) which enhances the nebula and its structure.

We will feature more about this amazing camera in some upcoming future posts.