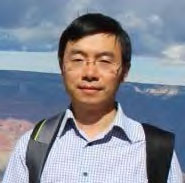 From childhood Dr. Qiu Hongyun held a keen interest in nature, science and technology. As a young boy he would go to the chemical factory where his father worked and do chemistry experiments in the lab. He also enjoyed tinkering with electronics and made small board projects and a radio. In the 5th grade he read in a Science magazine about the approach of a comet. He tried to see the comet and although the toy binoculars he was able to find failed to be useful in spotting the comet, the effort and excitement of the event generated an interest in astronomy and that interest led to his making a small refractor telescope and later to attempt astrophotography with film. He had no camera only a homemade film holder. He would develop the film himself.

By the time he was in Middle School, his interest in astronomy had grown. As a science project, he made an ultra-long zoom lens (about 800-3000mm) and got very good results with it. The lens earned him an award for invention and even an award for innovation his first year of University study.

By that time, however, Hongyun was becoming interested in electronic imaging for astronomy. In 1988 he joined the Amateur Astronomy Society of Tsinghua University and worked with other members making a 200mm Newtonian reflector. The telescope incorporated a mechanical system that would allow the secondary mirror to rotate to three 50 directions where they installed an eyepiece, a film camera, and a high sensitivity security video CCD camera. The telescope design brought the group a science & technology award. Even so, Hongyun was somewhat disappointed in the results that could be obtained with the video camera and he set his mind to find a way to improve the results of electronic imaging.

In 1999 Hongyun designed a LCD projector that could project a 100 inch TV image on a wall. At that time the biggest TV available in China was a 34 inch CRT. The 100 inch TV project generated a lot of interest in his Univerity's campus innovation competition. He fondly remembers watching the Carl Sagan movie "Contact" and how the big screen gave such a deep impression when Jodi Foster went on her trip through the worm hole. His booth at the science fair was crowded with people wanting to see the large image.

One of the visitors was another student who proposed setting up a team to produce the device. Hongyun agreed and that year the first entrepreneur team in China to be founded solely by the students born. The team became famous in China and received good funding; however, by that time Hongyun was in the midst of his PhD study and eventually left the team to return to the University to complete his PhD in optical engineering. He never lost his interest in astronomical imaging, though, and in 2003 he came across some interesting CCD sensors for sale in the electronics market.

The first sensors Hongyun found where the Sony ICX038 and ICX262. The IMX038 is a monochrome sensor with 0.4mega pixel and often used in security cameras. The ICX262 is a 3.3 Megapixel color CCD used in NIKON990 digital cameras. Since the consumer digital camera had appeared in China in 1999, and Hongyun happened to have one, he was excited to find that particular sensor at a reasonable price.

Megapixel astronomy cameras were very expensive at that time, so relying on his experience with electronic design and his knowledge of astronomy, he began to design a new astro-camera, based first on the smaller CCD to work out the kinks, and later on the larger color sensor as a potential commercial project.

The first camera set up for testing is seen in the picture at right. It worked, taking suitable images of a magnitude 7 comet using a 135mm f/3.5 camera lens. For the ICX262 based camera Hongyun added the ability to adjust the gain to suit the imaging and the design was very successful. The first long exposure color image was very beautiful and the Sony 3.3 Megapixel CCD's low dark current (SuperHAD technology) was an attractive feature. That was the year 2004.

Hongyun realized that although this first camera had 3.3 Megapixels, the pixels were very small, only 3.45um, which is too small at the time for SCT and other large scopes most amateurs were using for imaging. He hoped to design a camera optimized for these larger scopes. Nikon then released a DSLR with an APS-C sensor. The sensor was big enough and used 6 micros pixels. It also had high sensitivity and low dark current, but they proved difficult to get from Sony. 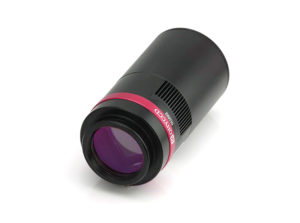 The cameras were available at reasonable prices, so Hongyun planned to buy some new D50 cameras and take the CCD sensor out to make an camera with this sensor. It would be called the QHY8. Needless to say it became a hot product and QHY sold hundreds of QHY8, QHY8PRO and eventually released the QHY10 and QHY12 models. QHY had arrived in the amateur astronomy imaging market to stay.

Another reality of astro-imaging that did not escape Dr. Qiu's attention was the need for autoguiding, although the first QHY autoguider almost never was. While experimenting with CMOS for deep space imaging Dr. Qiu developed the QHY5. The CMOS sensor offered decent performance, high frame rates and low price. He experimented with both Omnivision and Micron CMOS and settled on the Micron MT9M001, 1.3 megapixel 1/2 inch sensor. It delivered 15fps to 30fps at full resolution and it came in a monochrome version.

But it had a big problem - the sensor had unacceptable random horizontal noise, especially in high gain, which made it unusable for deep space imaging of faint objects.

I am a person who expects perfection, especially in the hardware design, camera performance and image quality. 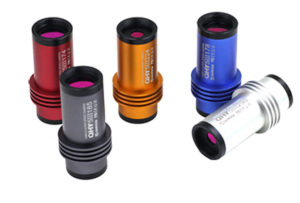 So the decision was made to relegate the QHY5 design to the trash bin and move on to something else.However, before killing the project, Craig Stark of Stark Labs happened to mention that he was developing autoguiding software called PHD Guiding and he thought the QHY5 could be used for autoguiding instead of imaging because the random horizontal banding might not affect the result for guiding purposes. Testing confirmed this and the QHY5 autoguider was born! Due to its positive features, like good sensitivity and high resolution, plus the low price, the QHY 5 became one of the hottest autoguiders, selling thousands each year, and still available in OEM products.

From these humble beginnings, QHYCCD has grown to a leading supplier of cooled CCD and CMOS cameras for science and industry, with a current offering of approximately 40 models and configurations of cameras, filter wheels, guiders, and other accessories for astronomical imaging. And from the modest small CCDs and APS sized sensors, QHYCCD now supplies cameras with sensors up to 50 Megapixels, and up to 70mm diagonal size, plus several 35mm format cameras and scores of smaller sized sensors, including both front and back illuminated CMOS sensors with over 90% QE.