This entry was posted on July 24, 2018 by Team Baader Planetarium 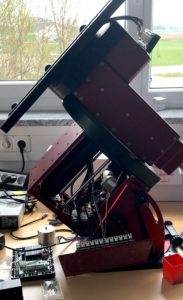 A client of ours sent a Paramount ME mount to us for repair claiming that the R.A. motor was defective and stopped working and to upgrade the electronics from an old MKS 3000 board to a new MKS 5000. 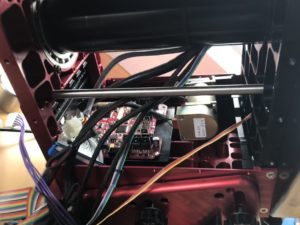 After receiving the mount and made the first inspections, we noticed that the R.A. axis wasn´t moving at all and that the motor was probably faulty. We opened the side panels of the mount so we could access the electronics and the motor, only to be faced to a big surprise.

Inside the mount, we found pumpkin seeds. 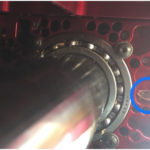 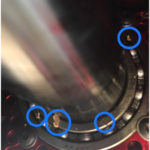 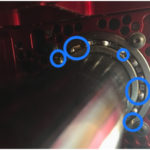 The seed got inside the ball bearing, had dried the whole grease from it and pieces of the seed got stuck between the balls and impeded the movement of the ball bearings. This of course had put stress on the motor, which after a while must have given up and stopped working. 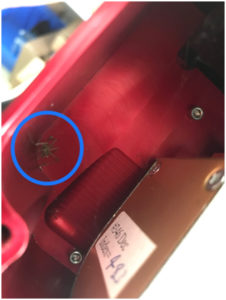 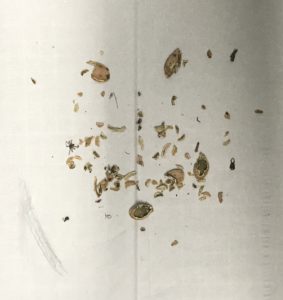 After cleaning the ball bearing and picking pumpkinseed pieces one by one, we gave to the mount a nice clean with pressured air. Other pieces hiding inside the mount flew out. We repeated the same process for the other axis and for the worm assembly panels as well where we found a little insect. All the materials found inside the mount you can see on the picture below.

Then we re-greased the ball bearings and the worm assemblies on both axes.
After changing the electronics and re-routing the cables for the new back panel on the Versa-Plate, we had to reprogram the ME for the new Motor Index Angles and the hand controller using “The Sky X” software. 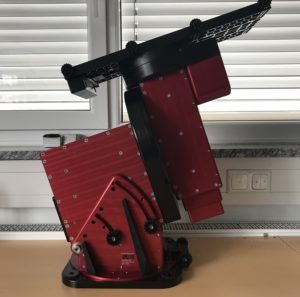 After testing the mount for a while, regarding the mobility concerned if the new internal cabling process would hinder the smooth movement of the axes, we tied the cables together and closed the side panels. We put it to another movement test, using a script we´ve written for “The Sky X” software, to see this time its reaction time, accuracy and carefully hearing the sounds of the mount.

It didn´t produce any errors or abnormal noises, showed agility and accuracy by pointing and slewing and finally cleaned the mount on the outside, packed it and made it ready for delivery to the client.

Basically we restored an old and dirty Paramount ME into a new looking, clean Paramount ME with the electronics that are now inside all modern Paramount mounts like ME II, MyT and MX+.

I don't know if the insects and the pumpkin pips came into the mount while it was in my possesion or if they were already there when I puchased it from its previous owner. When I do not use it, I cover the mount "tight" with a piece of cloth so that it will not collect dust. Of course, remote use is impossible this way, so I remove the cover during times of good weather. The dome is not "airtight", instead it has got a - rain-proof - ventilation gap.It is mounted on a wooden platform, which is also not perfectly insect-proof. A professional Baader-dome, which would be completely sealed, works at every temperature moves silently at night, would of course be a dream. The price-tag for remote use incl. electronics - rotating, automatic opening/closing, shipping and set-up - are high, but surely worth the money.