This entry was posted on September 15, 2015 by Dipl.-Ing. Wolfgang Paech

For this year's longer stay in Namibia we planned to photograph the minor planet (5658) Clausbaader. It had a high altitude in the evening sky, close to Saturn. The series is intended as a small tribute to Mr. Claus Baader, the founder of Baader Planetarium in Mammendorf, who was one of the leading personalities in the field of amateur astronomy and public education in the last century in Germany. Read more under Company History. 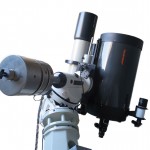 The imaging instrument - the 150mm Zeiss APQ refractor and a Celestron C14 on a Astrophysics 1200 GTO mount in the 4 meter dome.

The images were captured at the 150mm Zeiss APQ refractor at Onjala Observatory and an "ancient" SBIG ST2000-XM.

After completion of our "Project Pluto" - the experiment to take Pluto with a classic 2 inch telescope - first test images were made on September 5. The whole project was ill-fated from the very start. 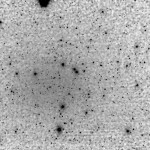 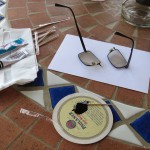 First Paech dropped his glasses and broke it exact in the center. The spare pair worked quite well in daylight however in the dark night the stars remained blurry. Luckily there was a "magical" two-component glue who managed to connect the broken glasses permanentely.

In addition, the drying cartridge of the for years unused SBIG ST-2000 XM CCD camera stopped working. Even at temperatures just above 0 degrees the chip surface iced up despite the low humidity of about 20 percent. Test shot from September 5 with a completely iced chip surface. 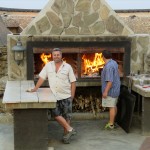 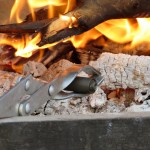 Since the kitchen of Onjala Lodge has only gas ovens without temperature display and microwave ovens there was the question: how to "bake" the cartridge.

According to SBIG the cartridges must not be dried in a microwave oven so we decided to use the "hellfire" of regular Saturday BBQ evening and "grill" the cartridge for a few hours.

The success was not stunning but enough to operate the camera within the next two nights at temperatures around 0 degrees celsius.

position of Clausbaader on September 09, 2015. In the image field there were also the minor planet Wurm (1785) and some other objects. But they were so faint that they are not detectable with this image equipment.

To be sure that the positioning of the GTO1200 mount points to the correct small field of view, the mount was initially positioned on Saturn, then performed a recalibrate of the controller and then positioned on the coordinates of Clausbaader. To finally check the positioning the corresponding field has been verified with the star map program GUIDE 9.0.

This comparison between GUIDE and the live image of the SBIG camera is not so easy, as the camera shows even at short exposure times far more stars than the sky map shows. In addition, the orientation of the star map must match with the camera image. Unfortunately there were no conspicuous star constellations at the position of Clausbaader which made this step more complicated. 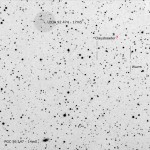 The first attempt to photograph Clausbaader took place on the evening against 19:34 UTC with a 300 seconds exposure. A second image should be taken 2 hours later to identify the minor planet by its movement against the background stars. Unfortunately, the sky clouded at this time. In general, the weather during our stay in Namibia from early July to the end of September was very mixed.

A first analysis of the image confirmed the correct image field (field size: 33.9 x 25.4 arcmin, scale 1.27 "/ pixel), the position of the two galaxies LEDA 92474 and PGC 56147 agree with the map from GUIDE. The minor planet Wurm clearly shows a short line because of its higher proper motion (Img 3)

At the point where GUIDE shows the position of Clausbaader, a faint object is in the image but it could also be a background star. Therefore, the object in the image is marked with a question mark. 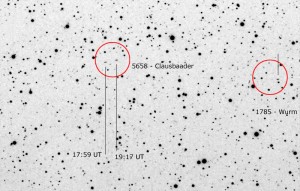 On the next evening three images, showing the minor planets Clausbader and Wurm and their movement in the sky, could be taken. The brightness of Clausbaader with 18.5 mag was already at the limit for camera and telescope for a moving object.

The right image (Img 4) shows a superposition of two 600 second exposures. The positions of Claus Baader and Wurm are marked (17:59 and 19:17 UTC). Between these two images, a continuous 2400 seconds exposure was captured (see below). The waiting time was pleasantly spent with a GinTonic in the bar of Onjala Lodge. Now, the other image data: 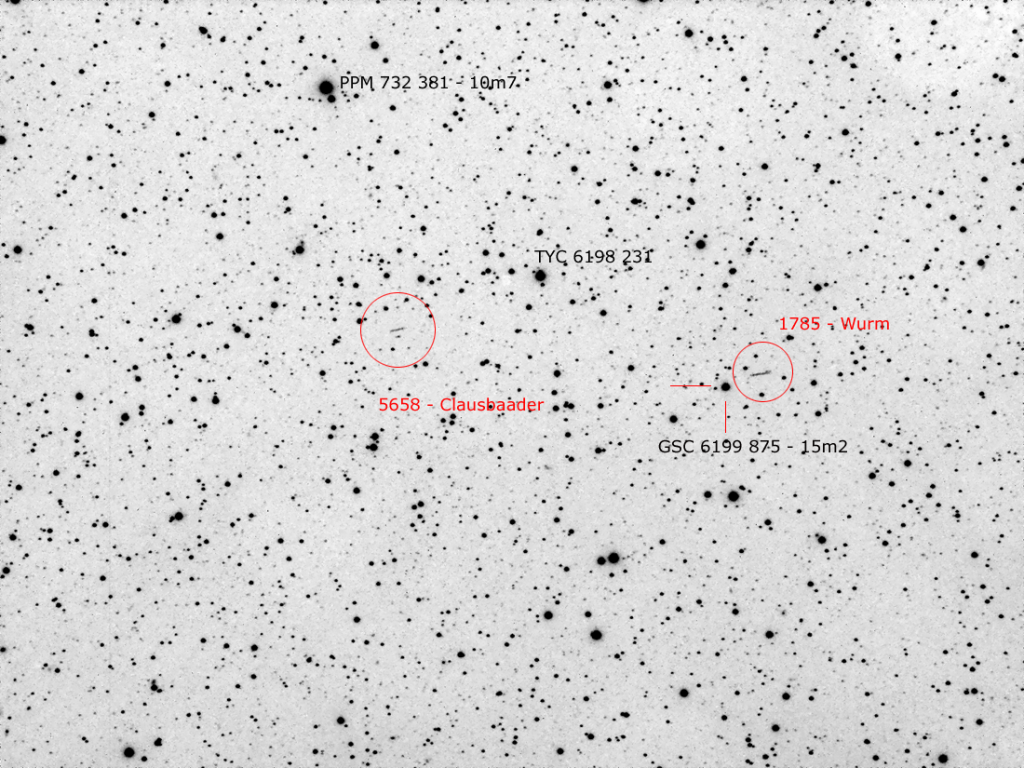 Due to the fact that the minor planet Clausbaader was located in a very attractive part of the sky at this time, an overview image was also taken (see image below). 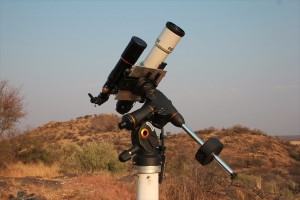 The picture shows the portable mount, a Celestron CGEM DX. In the background the Onjala 4m dome and the private 3m dome of Chameleon Observatory just before sunset. 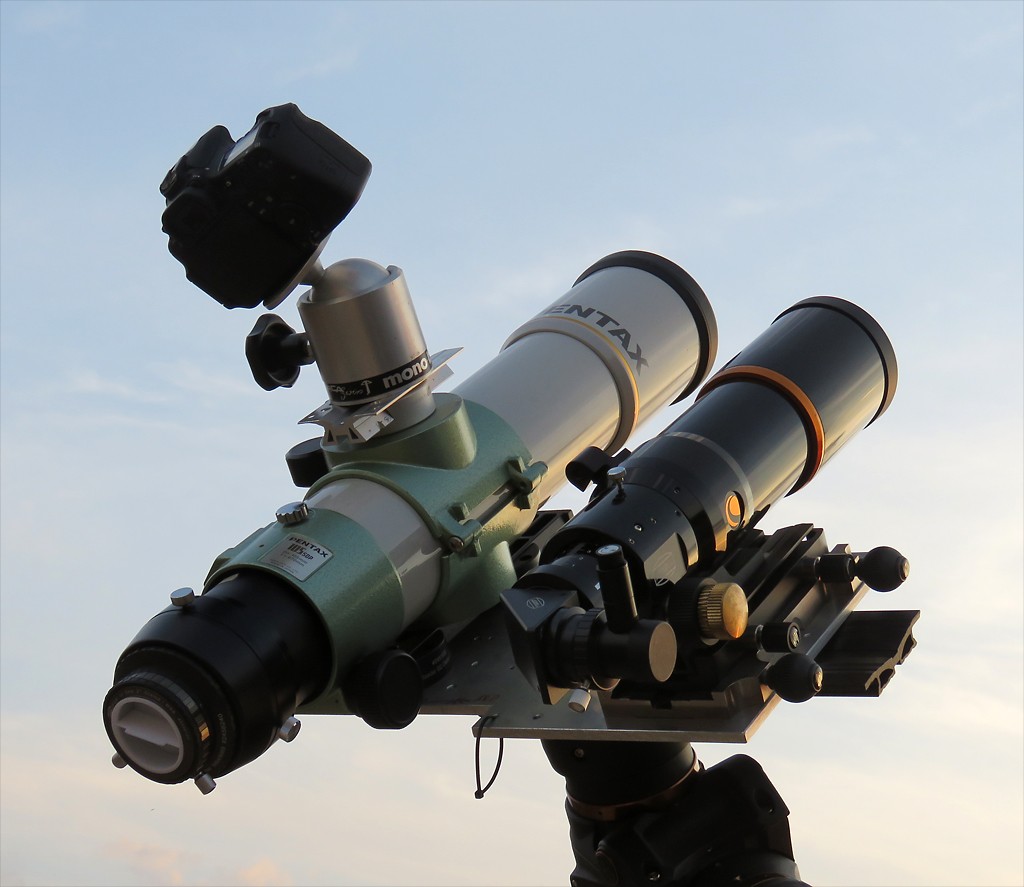 The EOS sat "piggyback" on a 105mm Pentax refractor (next to the right a Celestron 80mm Onyx). The mount is performing so well that no guiding was needed. 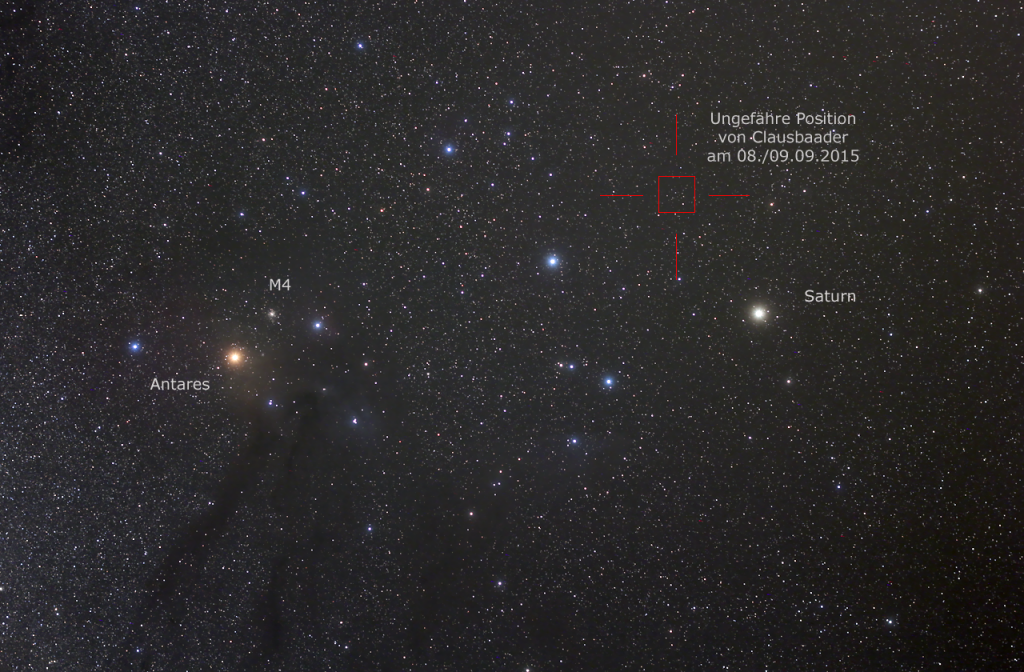 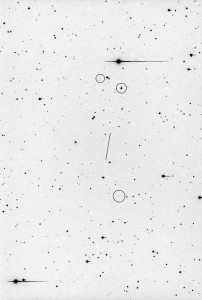 The minor planet (69230) Hermes - CCD recording from W.Paech, shortly after its rediscovery on October 28, 2003. Exposure time 1800 seconds with a SBIG ST-10 XME. The image shows three more minor planets in the circles. Raw image was taken in Germany, near Hannover, Lower Saxony

Karl Wurm (born July 21, 1899 in Siegen; † 16 February 1975 Bonn) was a German astronomer. Wurm studied at the University of Bonn mathematics, physics and chemistry with a doctorate in 1926. Then he went to the Astrophysical Observatory in Potsdam, where he studied band spectra of molecules from stellar atmospheres and comets. This led to a contribution in the Handbuch der Astrophysik (1930). He did research on comets and in particular after a atudy stay at Yerkes Observatory (Otto von Struve) on spectra of gaseous nebulae. In 1941 he was main observator of the Hamburg Observatory in Hamburg-Bergedorf. In 1950 he was a few months visiting professor at the Humboldt University in Berlin and at the observatory in Babelsberg. Due to the poor observation conditions in Hamburg he observed since 1954 regularly in Asiago (Veneto). SOURCE: Wikipedia

Karl Wilhelm Reinmuth (born April 4, 1892 in Heidelberg, † May 6, 1979) was a German astronomer who worked at the observatory on the Königstuhl near Heidelberg. Reinmuth attended secondary school and then studied at the University of Heidelberg. Even as a student, he worked at the observatory under Max Wolf in 1916. He received his doctorate with a thesis of photographic positioning of 356 Schultz's nebulae. Until his retirement in 1957 he was employed at the Königstuhl, only interrupted by military service in World War I. Since 1914 as an assistant, since 1926 as an observer and since 1937 as a top-observer. In 1928 he married Lina, born Alstede. The couple had three sons. Reinmuth discovered two short-period comets, namely 30P/Reinmuth and 44P/Reinmuth and 395 asteroids (see List of asteroids), including Apollo, the namesake of a group of asteroids (Apollo-type), whose paths can cross the Earth's orbit. Reinmuth's discoveries of asteroids was in the period from 1914 to 1957. SOURCE: Wikipedia