The Rodewisch Observatory in Saxony/Germany has a long history dating back to the beginnings of space travel. The observatory founder Edgar Penzel was the first person outside the former Soviet Union to photograph the first satellite Sputnik 1 in 1957. With a wire ring that he bent around a school globe, he was able to roughly determine the time of the satellite's appearance over Rodewisch and photograph "the Sputnik". The photos sparked great interest at home and abroad at that time, especially of course in the Soviet Union. This was the foundation for decades of visual and photographic satellite tracking as well as astronomical observation of the sky in Rodewisch. After the first German cosmonaut Sigmund Jähn was launched into space in 1978, the Rodewisch observatory (built in 1959) was named after him. The godfather of the name lived not far from Rodewisch and visited regularly until his death in 2019. 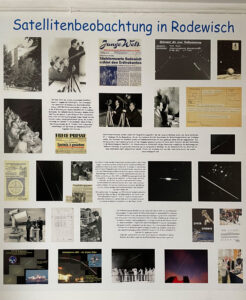 When you enter the observatory and the adjoining Zeiss Planetarium, you are surrounded not only by this long space connection but also by the love with which astronomy is cultivated. The walls are littered with information, stories, travel reports and astrophotographs of the observatory members, every amateur astronomer's heart swells when looking at and reading them. Astronomy is alive here! 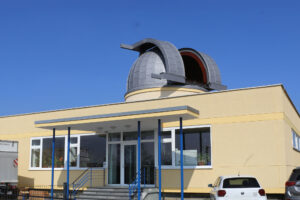 We were very happy when we won the tender for the new installation of the observatory. An installation in an old-established observatory is always something special, because you not only do your work, but also meet like-minded people with whom it is a real pleasure to exchange ideas and to work together. So it was also in Rodewisch, we were very warmly welcomed by Mr. Graf, the observatory director. Everything was perfectly prepared, the newly renovated Zeiss wooden dome presented itself in almost mint condition. Although the observatory seems to have been built for a long refractor, which is why the dome is quite high, a very massive, old and also freshly renovated wooden staircase allows any observer to easily reach the eyepiece in any position. 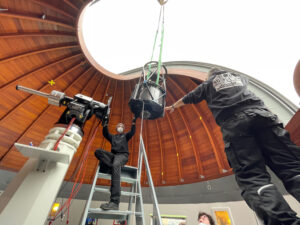 Right at the beginning of the assembly there was the only problem: the concrete base on which the new Baader steel pillar was mounted proved to be recalcitrant. There was so much metal in the concrete that the concrete anchors did not grip. But such a small dilemma stops an experienced assembly team only for a short time. With a few tricks, the new column was securely fastened in the second attempt. When the mount and the Planewave CDK 20 were swung into place on the crane, many onlookers, press and TV around the observatory witnessed the spectacle. 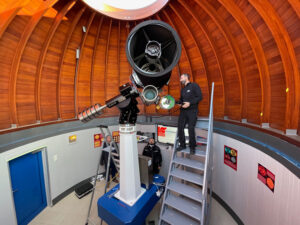 All instruments are mounted and getting adjusted

After the rough mechanical installation on the first day, the details followed on the second day. In the dome two more telescopes ( TEC APO 160 f/7 Fluorite Apochromat (#1351010 , € 17900) and Celestron RASA 8" Astrograph f/2.0 (#822252)) were installed and adjusted beside the PlaneWave CDK 20" Astrograph f/6.8 (#1323220Q) on the 10micron GM 4000 HPS mount. But unlike at the time of the observatory's founding, today's equipment consists of more than just mechanics and optics. Electronics and computers have become at least as important and certainly account for more than 50% of the installation work of a modern observatory. It took about 12 hours to connect all cameras, wire the network and get it running. Without the integration and testing that had already taken place weeks earlier in our factory in Mammendorf and without the Baader Observatory Management System (OMS) developed by our electronics and computer experts, the time required on site would have been much longer. 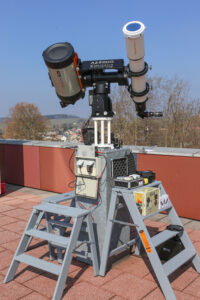 Parallel to the work on the electronics in the dome, a 10micron AZ 2000 mount was installed on an existing column on the terrace and equipped with a TEC APO 140 f/7 Fluorite Apochromat (#1351005 , € 10650) for solar observation and a Celestron 11" EdgeHD Telescope (#822252) for deep sky observation. The first view of the Sun with the TEC and Baader 2" Cool-Ceramic Safety Herschel Prism (Visual / Photographic) (various versions available) was stunning: granulation across the entire solar disk! The new Solarspectrum SunDancer filter added to the experience, all day long the experienced amateur astronomers on site marveled at a Halpha solar image with details otherwise only known from the best amateur photographs. Finest filamentary and fast changing structures in prominences, the "chromospheric grass", the spicules, in highest resolution, great contrast on the surface. 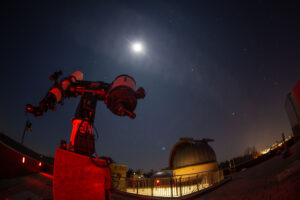 The observation platform at its 1st Light

By dusk most of the work was completed and now it was time to adjust and align the mounts. The AZ 2000 was ready to go in a few minutes thanks to 10micron's sophisticated firmware. From now on, one could not resist looking through one of the telescopes from time to time, despite the work not yet completed. The TEC 140 FL inspired with a crisp, color-pure and contrast-rich moon picture. The Edge HD 11" telescope with its high resolution showed even the tiniest mountain shadows and crater rims in great detail.

Inside the dome, the polar alignment of the parallactic mount was a bit more work than outside, but with the sophisticated alignment routine and experience from many observatory mounts, an accuracy of the polar axis alignment in the arcsecond range was achieved. Finally, 50 sky fields were automatically approached with the CDK 20 and connected QHY 600 camera, photographed, evaluated with Platesolving software and read into the mount as data points. 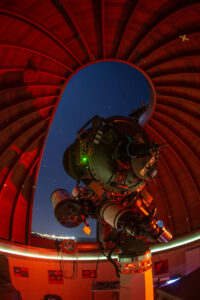 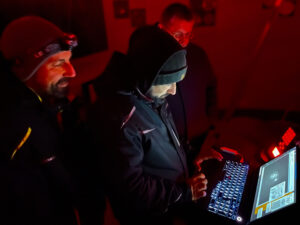 Thus the mount computer now has enough information to calculate the sky with an accuracy that allows astrophotography with long exposure times even without autoguiding - despite the long focal length. The "First light" with the CDK 20 at M51 shortly before midnight confirmed the quality of the installation.

Shortly after, the parallel mounted Celestron RASA 8 showed what it can do. The same galaxy was conjured on the screen with only one second exposure time! In the future, no visitor will have to wait bored until it is his turn to look through the eyepiece. Thanks to the fast RASA 8 and a very sensitive QHY camera, the current observation object can be admired "live" at any time on a 55" screen on the wall.

This installation was a very nice and successful experience for us in an environment worth seeing. In Rodewisch everything is now ready for further decades of public sky observation and astronomical education with modern instruments. 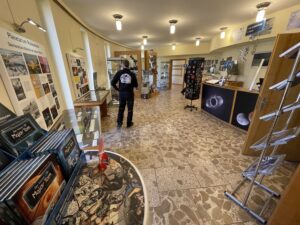 The entrance area of the planetarium also includes a store where astronomy enthusiasts can purchase books, meteorites and even telescopes. 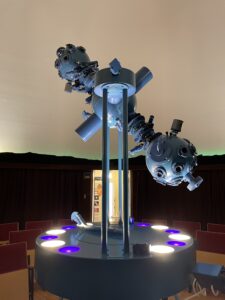 The planetarium projector has been modernized over time, for example with projectors that create an incredible effect in the dome.

Do you want to experience the new devices live?

Then visit the new observatory "Sigmund Jähn" Rodewisch (as soon as this is possible again)!
More information on www.sternwarte-rodewisch.de