This entry was posted on January 8, 2020 by Michael Risch

Our last dome assembly in 2019 took place in the second week of December in Greece. Since this installation had a special flair as well as bad luck and breakdowns, we would like to share with you the following report of the installation.

After the dome has been used for some time, we will also ask the customer if he agrees that his dome will appear on our observatory world map.

The mountains of the Greek peninsula Peloponnes are ideal for astronomical observations. Here an amateur astronomer has found an ideal place to realize his dream. The dome sits on a renovated 19th century house in an old, lonely mountain village at an altitude of almost 900m with an unobstructed view over the sea. However, the installation of the observatory was not easy due to its location and some external circumstances.

Our team was waiting for the truck to deliver the dome, when suddenly the forwarding agency reported that there was a small delay due to an accident. Instead of 8 AM the truck should be there at about 10 AN. Unfortunately the forwarding agency did not say on which day. Only 24 hours later the dome was on site, so that the time available for the assembly was very limited. We were surprised to see that a red truck arrived instead of the grey one we had loaded and we were very worried that the valuable dome parts could have been damaged during the reloading by the forwarding agency. We were lucky, except for a few scratches that could be polished out, everything was fine. 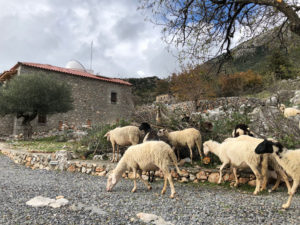 Unfortunately the red truck was much bigger than the truck that was actually agreed upon for the assembly - so it didn't fit through the narrow alleys of the old villages. Therefore a smaller platform truck with crane was quickly organized. Everything was reloaded and the equipment was brought to the site in two trucks. Once there it started to rain. We thought we were smart and put a plastic tarpaulin under the sand court and another one on top of it to be able to assemble in the dry. But the weather was smarter. Thunderstorms tore the tarpaulin over us away and it rained suddenly in streams. We could fasten the tarpaulin only halfway again. While we were showered this way and enjoyed a mud pack on our feet, we got again and again visits from sheep and goats that were visibly surprised about the strange activities in their realm. After 8 hours the dome could finally be closed - and it stopped raining on time. 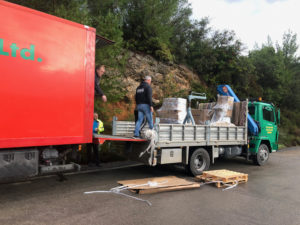 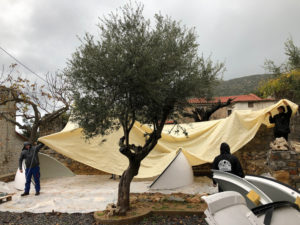 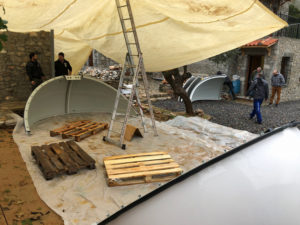 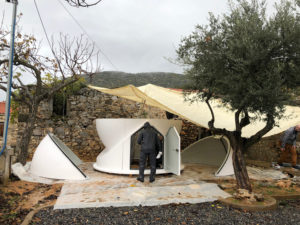 The next day a breathtaking view over the sea with sunshine reflected in it awaited us. On the other side the mountains, which were snow covered and partly covered with fog. Our client has indeed found a paradise here, you are really one with nature. Unfortunately nature sometimes exaggerates, so the thunderstorm flooded the roof terrace where the dome was placed and we first worked as a cleaning crew. At 9 AM the dome should be lifted with a crane. At 8 AM came the call that the crane is defective. What else. 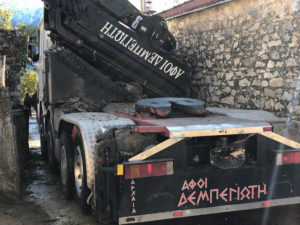 This would normally have put the assembly in such a remote location in serious danger or even ended it. Our customer had probably already thought that something like this could happen in advance and ensured that we had active help at all times "just in case" with George, a well-connected contractor. He was able to organize a truck with crane, which finally arrived at 11 AM. When driving through the narrow gorges of the village, there were sometimes only centimetres of clearance on both sides. However, a tree in the driveway of the property proved to be an insurmountable obstacle. Fortunately the crane driver had a chain saw with him - we were working as forestry workers. Soon the crane could continue its journey.

Shortly afterwards, the dome was lifted in the most beautiful sunshine - and the electricity only came out of the socket to a very limited extent. The freely hanging power lines had probably suffered from the thunderstorm the day before. A generator was brought in (George...) so that the column and dome could be drilled firmly onto the building. Meanwhile sheep and goats were enjoying the fresh leaves of the cut off branches of the entrance obstacle. 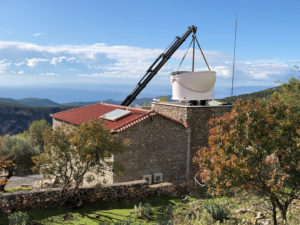 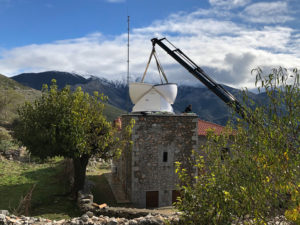 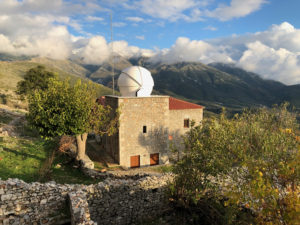 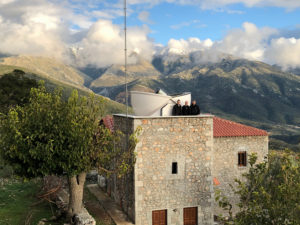 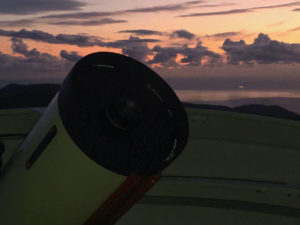 Even if you have seen it many times before, it is always nice when a dome "floats" on a roof, especially against such a backdrop. Miraculously, the lifting and mounting of the dome went absolutely smoothly. Nothing fell out and nothing broke. Also telescope and mounting could be installed without any problems. Then the functional test of the dome - nothing moved. It took us some time until we realized that only the new 9V battery in the hand switch had died, for whatever reason. It has never happened before. Luckily we had a very nice, understanding customer who bought the battery, which meant a 40min drive back and forth to the next city. This was probably a last greeting from the "unlucky and mishap devil" (german phrase) who was breathing down our necks for two days.

The good thing about it: At the next assembly we will certainly not have anything to worry about after this experience.