Installation of a 4.2m Highspeed Dome on Teide/Tenerife 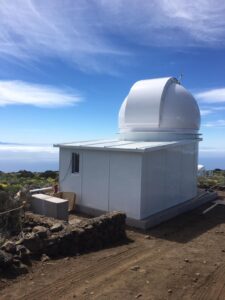 Our installation team had the task of installing one of our HighSpeed domes on the Teide in Tenerife in May 2021.

The Teide is a unique natural wonder. The 3,715-metre high "sleeping" volcano is the highest peak in Spain. The national park located on the mountain is a UNESCO World Heritage Site and offers an impressive crater landscape with cooled lava flows and other volcanic phenomena as well as endemic animal and plant species. At an altitude of almost 2,400 metres, there are many astronomical observatories, including – due to the excellent seeing during the day – one of the largest solar telescopes in the world. 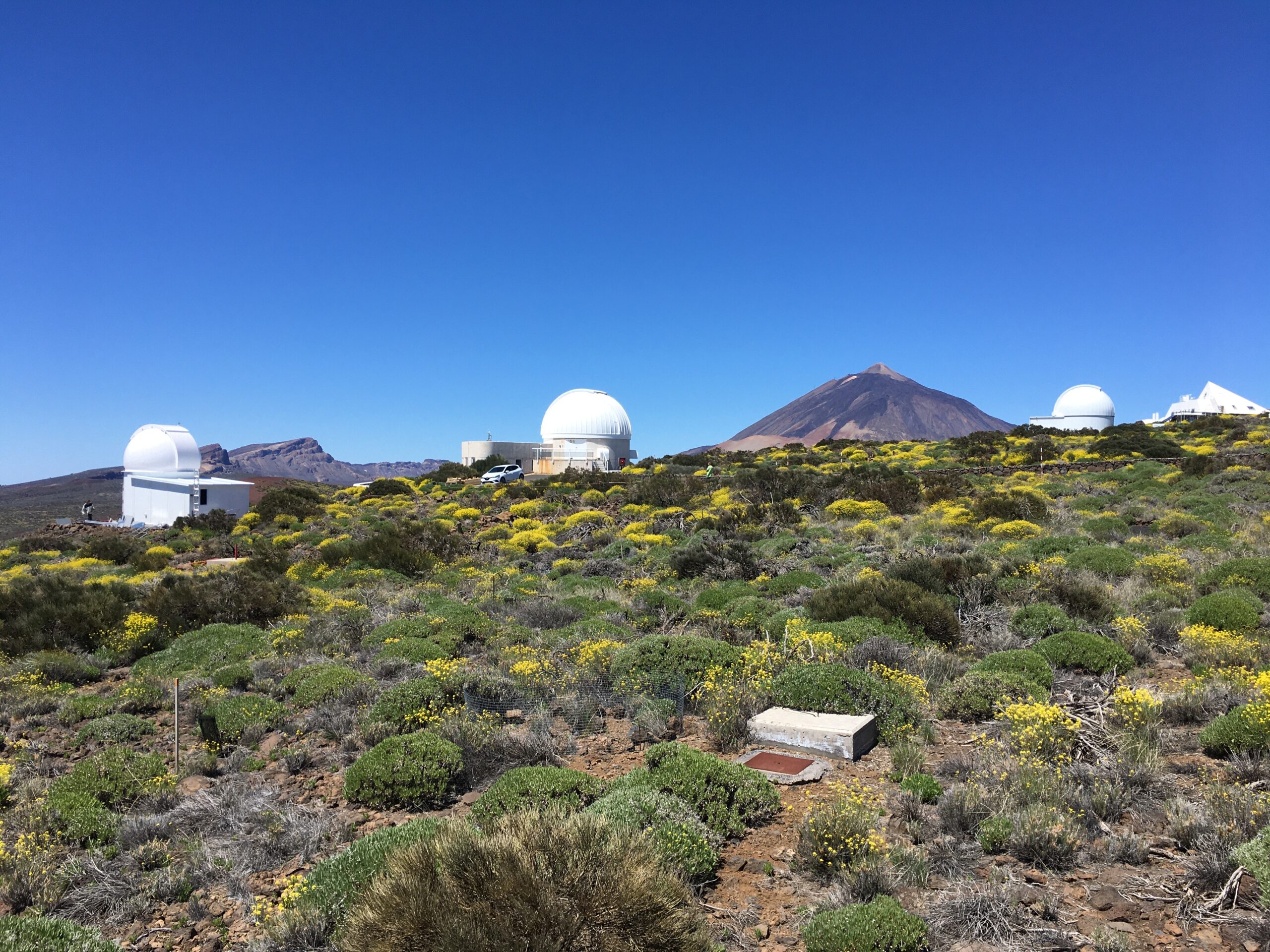 Our team was accommodated in the "Astronomers' Hotel" not far away from the observatories, which has a very special atmosphere because many rooms are completely darkened. The daily routine is "reversed" – during the day, most technicians and astronomers sleep, while work is done at night. So an assembly team that works during the day has to sneak out of the hotel very quietly in the morning.

The conditions were almost perfect for the installation of the dome. With temperatures above freezing, the sun shone from a deep blue sky. You just had to be careful not to get sunburn, which unfortunately happens very quickly at this altitude. And if you haven't experienced it yet, you'll be surprised at the effects of the very low humidity. Even after a short time, you notice how the skin and especially the lips are strained. The only thing that helps is lots of moisturiser!

As usual, the assembly was carried out routinely in four days, of course by the same team that had already assembled and tested this dome at our factory. We leave nothing to chance, good preparation is everything. There is nothing worse than losing time on site because something doesn't fit or has been forgotten. Thanks to many years of experience, this risk is virtually eliminated during our installations. 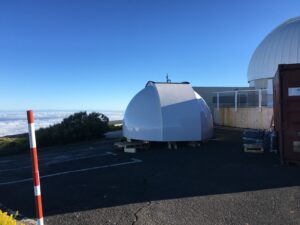 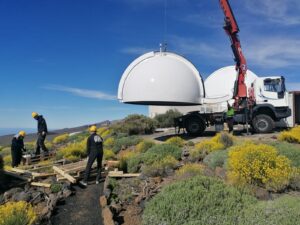 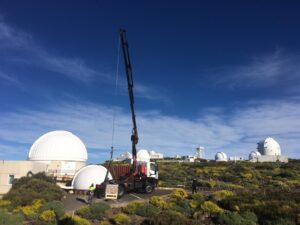 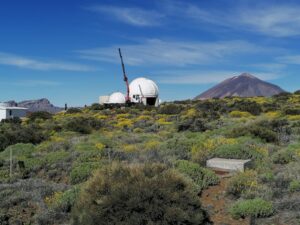 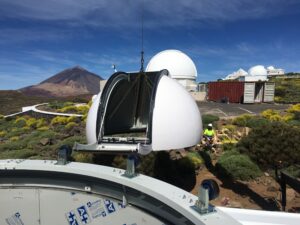 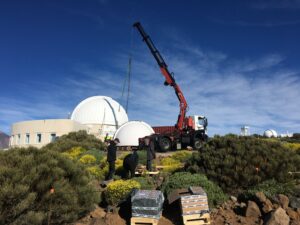 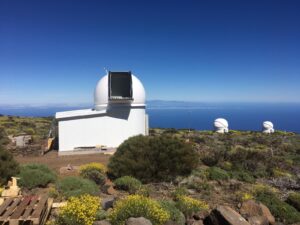 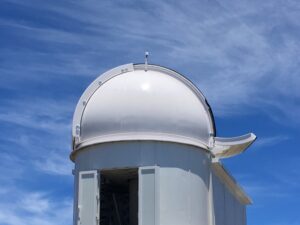 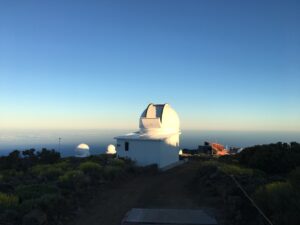 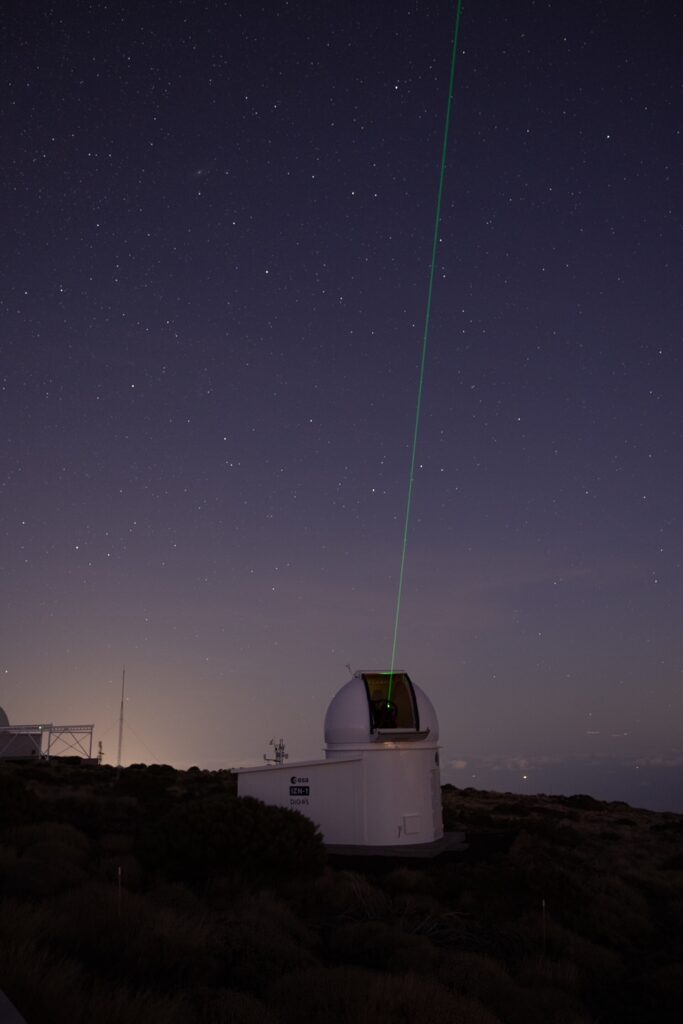 4.2M Highspeed Dome on Teide/Tenerife by the company DIGOS on behalf of ESA . ©ESA

This special type of dome was designed for space and satellite applications. The fast dome rotation allows the telescope to continuously track even satellites in very low orbits. Likewise, the observation of so-called "space debris" is possible, i.e. non-steerable rocket parts, satellite debris or disused satellites in low earth orbit and posing a danger to space travel. The orbits of these parts are constantly changing due to friction with the Earth's atmosphere. They must therefore be observed again and again so that other rockets and satellites can avoid them. This is precisely the purpose of the station, which was developed by the company DIGOS on behalf of ESA and is now well protected in our dome. It points lasers at the satellites and receives the light reflected back. From the time difference between emitting and receiving the light, the distance of the satellite can be determined, and from the mount encoders, the coordinates can be read out for orbit calculation. In the near future, the laser will also be used for communication with satellites, as a kind of "fibre optic line to the sky". 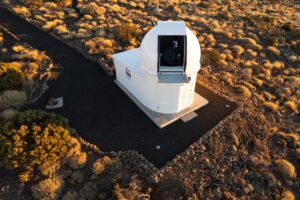