This entry was posted on July 18, 2016 by Team Baader Planetarium

In the near infrared spectral range atmospheric disturbances (seeing conditions) are much more less than in the visible spectral range. Images taken in the near infrared light are often sharper than images taken in shorter wavelength. Special the moon (and the sun also) are nice targets shooting images with the IR Passfilter due to their brightness.

All the following images was taken in the same night within a time interval of only 45 minutes (decreasing moon). The seeing was during the whole imaging session moderate.

The animation left shows the crater chain Catena Abulfeda in a direct comparison between the UV/IR and the IR PAssfilter.

The examples above show clearly the improvement of the images taken through the Baader IR Passfilter.

But the Baader IR Pass Filter can do more in imaging the moon.

Beside seeing enhancement, observers are able to shoot images of the moon at bright daylight with sun in high altitude. Sky background turns to black and high contrast of moon details seems to be smoother than at night. So one is able to take moon images at illumination setting not availeble at night time.

The idea came upon me quite spontaneously to test the cleaning results of the SC-plate. On a crisp and clear morning, contrast at the lunar surface is still so very good that the resulting images constitute a real reference, to demonstrate what an optical tube can do with proper IR-filtering, when it is completely free of haze caused by the usual assortment of dust or pollen - plus improper cleaning attempts.

Shooting the moon in bright daylight 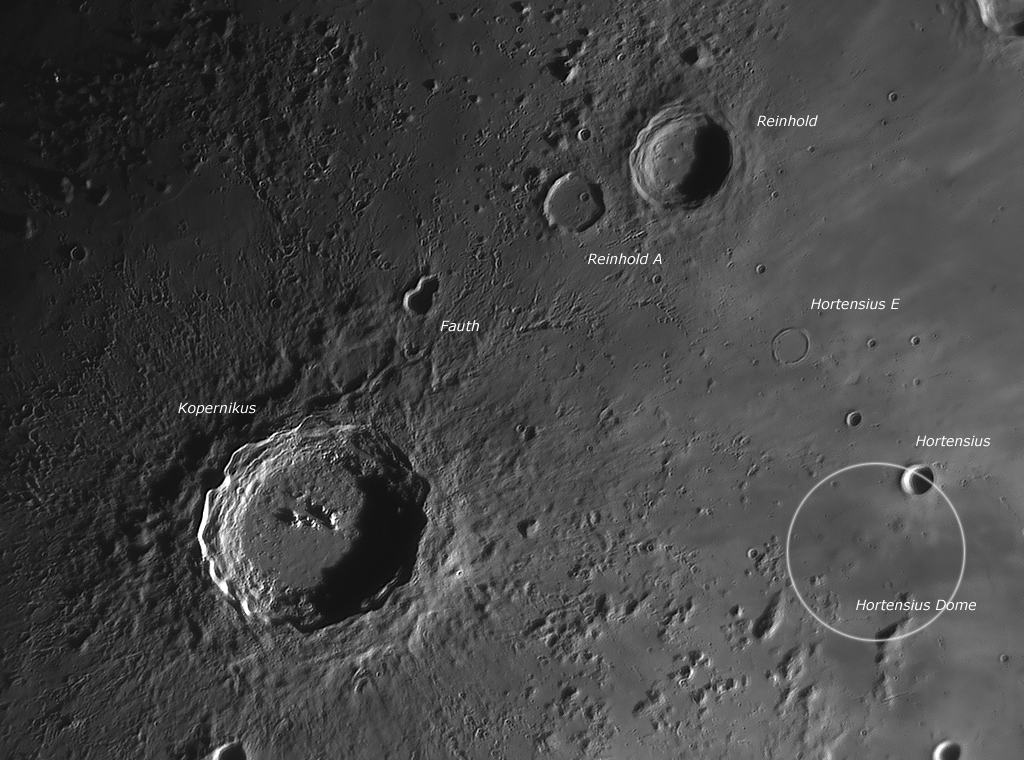 The instrument used is a Celestron C14 SCT at the Onjala Lodge/Namibia. The Camera was a SKYRIS 445Mono. The Raw-AVI-files (1200 frames) were taken on April 23rd 2014 from 8:30 to 9:30 UT with the Sun ~45 degree above the horizon. The first image (left) shows volcanic domes near the crater Hortensius which are quite difficult to observe owing to their moderate height.

The image shows the large crater Copernicus and the volcanic Hortensius-domes H1 to H6. Their diameters range from 7.6 up to 12.5 km. Crater summits measure about 1 to 2 km in diameter but only 190 to 390 m in height.

Having these fine structures become visible so strikingly in bright daylight requires a good optics and especially an effective IR-pass-filter. The Baader IR-pass really proved helpful here. With even the slightest amount of haze or straylight - or with any residue from the cleaning fluid left on the corrector, these results would have remained unobtainable.

The following images show more examples in bright daylight at the same day. From left to right: Kepler and Encke, Bullialdus, Lacus Tomoris and Hainzel. Right outside - due to perfect libration conditions - two difficult to observe large craters: Bailly and at the lunar limb Hausen