This entry was posted on December 5, 2018 by Michael Risch 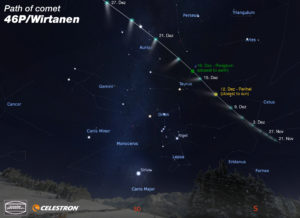 The Comet 46P/Wirtanen approaches the earth and becomes brighter and brighter. Latest estimates (December 3rd) are about 5m, so theoretically it should be visible with the naked eye. However, its brightness is distributed over a full moon size in the sky, thus the surface brightness is low. To see such a special comet you need a very dark sky. And to be able to photograph it, suitable optics with high light intensity and short focal lengths are needed. This makes Wirtanen an ideal test object for Celestron's RASA f/2 astrographs, but it is too large for Rasa 11 and RASA 36cm to be imaged with a tail.

Fortunately, we received our first RASA 8 just in time for the first visibility period in the northern sky. The instrument was immediately handed over to Michael Jäger in Austria, one of the best comet photographers in the world. The first photographic results are promising. Cleanly adjusted ex factory, only the connection of the camera was necessary in order to capture the comet on the first clear night. 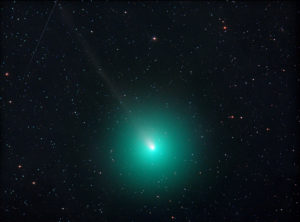 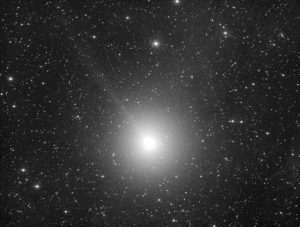 The color image shows the green coma, while the monochrome contrast-enhanced photo shows the very distinct long plasma tail as well as a bulge of the coma to the top and right, indicating a dust tail.

Comet 46/Wirtanen: Waves of the plasma tail in the solar wind

The gif animation shows the blowing of the plasma tail in the solar wind. Since the exposure times are very short thanks to the f/2 aperture ratio, Michael Jäger has succeeded in focusing the comet and the stars at the same time.

Of course, it is tempting to photograph the beautiful objects of the winter sky with a new telescope. Michael Jäger has selected the Rosette Nebula and the Orion Nebula for further tests. 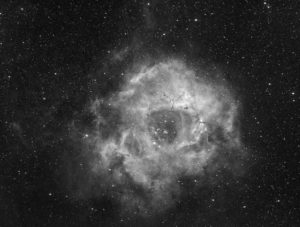 The monchrome photo of the Rosette Nebula is taken with a 12nm Halpha filter, with only 2min exposure time. Unfortunately strong winds have affected the star image a bit, but the image gives an idea of the possibilities of the RASA 8. 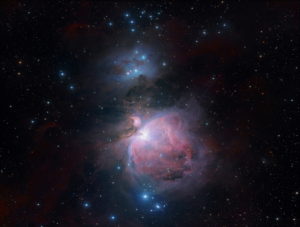 The very deep color image of the Orion Nebula consists of single images with H-alpha filters 2x270 and 3x60 seconds, RGB 1x90 and 3x20 seconds each (ASI 1600 camera with Baader filters). The total exposure time is only about 20min! For such a deep shot, the exposure times are usually in the range of hours. The location for all photos was Jauerling in Austria, under very transparent, dark conditions - as the high fog has largely dampened the scattered light.

Another advantage of the RASA 8: refocusing is only necessary occasionally when changing filters or larger slews from one object to the next. Re-adjustment is not necessary at all.

After these first tests Michael Jäger states the following about the RASA 8 optics:

The device is very effective and particularly well suited to photograph as many deep sky objects as possible in a short exposure time.

The RASA 8 seems to fulfil the hope for an easy-to-use "Astrograph for everyone", with which you can very quickly take beautiful images of many celestial objects. It is also ideal for scanning the sky for asteroids and comets.

As of spring 2019 the RASA 8 will be available at your Celestron dealer.