This entry was posted on September 10, 2019 by Christoph Kaltseis

Here is a firsthand report by Christoph Kaltseis about his work with the RASA 8 and an ATIK Horizon colour camera. 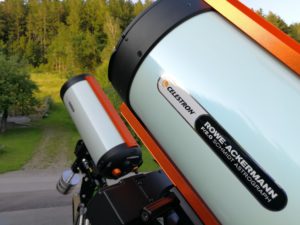 What can be said "Out-of-the-box" about the RASA after the first couple of clear nights? 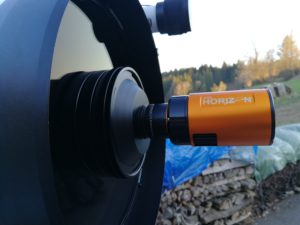 1. The OTA is small (when compared to the RASA 11) and easy to handle
It can be used easily on a smaller mount and is a true High Speed System at a very interesting price tag. If desired, it can be used in mobile setup, too!!

Because of the integrated air cooling system with ventilation slits and a fan the RASA 8 can be cooled down to the air temperature very fast. I rarely keep the fan running during exposures.

So, everything happened very fast on the day the RASA 8 arrived at my house: The parcel arrived at my home at 5pm, and at 8pm it was already set up on my mount under clear skies, ready for use. It was easy to balance the compact telescope in RA and Dec. This is a good thing, because you have to be very careful with such a fast telescope. Otherwise, the autoguider can cause elongated stars, if the guider "wobbles".

2. Attaching the camera is a bit odd, as with all RASAs.
I always follow the rule: First attach the adapters and check if everything is correct, then attach the camera. 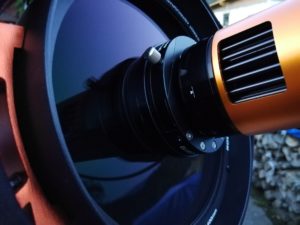 I take care of the orientation of the camera in-house, so that there is no wasted time or bad surprises later on the field. I used the Baader UFC M54x0,75 (m) Camera-Adapter (optical height: 2 mm) (#2459117, € 32,-) to attach the Atik Horizon Color CMOS to the telescope. The orientation of the camera can be easily adjusted by loosening the grub screws on the UFC – but I prefer to do this at a table rather than directly on the RASA 8 when it is on the mount. The result: Sits, fits and doesn't move! For f2, everything has to fit tight ad precise. 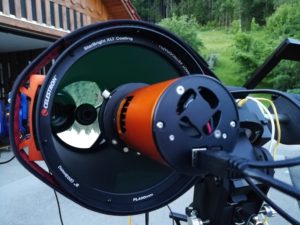 I led the cables away from the camera with some offset to reduce the spikes to a level where they don't disturb much. I also used a heating tape directly in front of the RASA 8, where I could fix the cables and where I expected a little help against the expected dew. The ATIK Horizon is a perfect match for theRASA 8, which illuminates an image circle of 22 mm. The pixel-resolution is 1,97 arc-seconds, at 400 mm focal length and f2.

3. 1st Light: Focus, image quality, stability and temperature behaviour
At the beginning of the night I chose Arcturus as the first alignment star: Select, goto, center and focus on the chip. As usual, the star is pre-focused and the focus knob is turned counterclockwise so that the mirror is always moving upwards in the same direction.
Then I had to select a weaker star in the field to fine focus with MaxIm DL and FWHM + brightness. That was easy and quickly fitted so well that I could say the focus was 99% right. The missing percent is due to air turbulence. The image was very good all over the field – joy, oh joy! It was as easy as you can wish for.

The second alignment star was Vega. Here I repeated the procedure and only had to refocus a little bit because Arcturus was high in the sky while Vega was about 45° above the hotizon. I turned the focus knob back clockwise and then back into focus. My practical tip: First move it three to four times half a turn back before you finally focus. The mirror shifting was very low, and I can't tell if it was the RASA or the mount, because I also put my hand on the RASA. But the image quality after a 10 seconds exposure was the same as with Arcturus -> Perfect!

4. Take the images
The first object was M13. It was high up in the sky, and after 30 seconds its center was almost overexposed. Okay: Do the final fine focusing in MaxIm DL and start the exposure series.

This image of M13 shows the capability of the RASA: 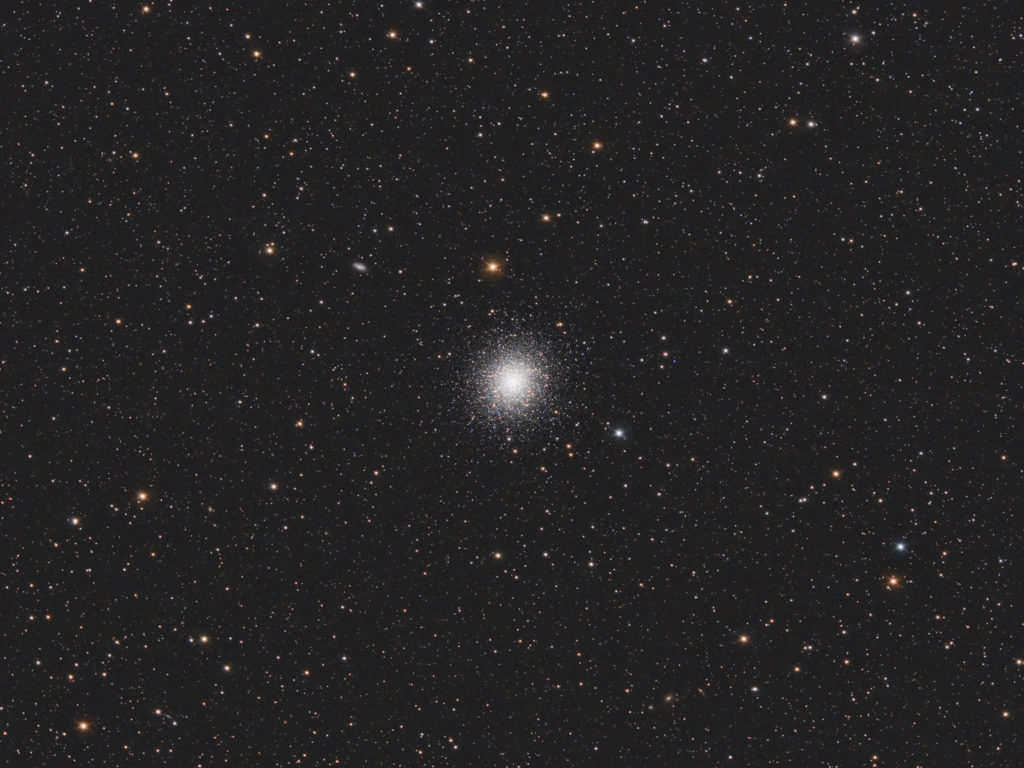 First Light - Out of the Box: M13 with RASA 8 - June 4th, 2019 - 58 minutes with Baader UFC filter changer and Atik Horizon Color CMOS camera. I took this image during the astronomical twilight(!): It is the result of 58 single shots of 60 seconds exposure time each. I've never seen such a deep image with less than one hour exposure time. I only calibrated the subframes in MaxIm DL and stacked them in PixInsight. These are the raw data, without sharpening or other image editing.

Thoughts, conclusion, and (why) RASA 8?! (The conclusion of my first night with the RASA 8)

Camera and heating strip work together to avoid dew on the optics. Contrary to my fears, this worked very good! The heat of the working camera acts like a second heater. But heat and ventilation of the camera do not cause noticable problems for the seeing; it is much more important to focus carefully and have a good tracking!
I always use the sky to aquire flatfield images (sky flats). This was no problem as always – if the sky is really clear! Gradient(s) which are caused by other exposures at the sky, will impair the image during stacking – better flatfields REALLY improve the final images!

One advantage of the closed OTA of the RASA is that no dust can reach the mirror. And the Schmidt corrector plate can be cleaned very easily!
I know from professional telescopes in Chile that even a thin layer of dust can decrease contrast and the amount reflected light measurably. This can lower the transmission by 10% or more, and the light scattering causes a weak contrast. The result is a flat image, lacking depth.
This brings up the question: What do I want? What i the use of a high-end system with perfect optical surfaces, if dust brings it to the level of a standard telescope? And to be honest, at least I prefer cleaning a Schmidt corrector to cleaning a mirror (which I have to remove from the OTA to do so).
The mirror surfaces of the RASA 8 are high-end – and stay so. Celestron has got many years of experience in producing these optics, and who invented it? The RASA is a worthy successor of the Schmidt-camera, with was invented by the German optician Bernhard Schmidt in the years around 1930.

USING THE RASA 8 is really fun, it delivers great single shot images and very deep stacked images "in (almost)" no time – be it with colour or monochrome cameras! Also, it is extremely portable and keeps its collimation.

Please note: A manual for collimation (if required) can be found on celestron.de as PDF: Collimation of a Celestron RASA

Of course, you can now say: „But colour cameras have a (so much) lower resolution than monochrome cameras!“ Well, than you need to read the second paart of this test, too. There I'll describe how the RASA 8 worked with a monochrome camera.

There is just one more question which has to be answered – but if I am allowed to keep it has to be discussed with my wife...