This entry was posted on April 24, 2020 by Team Baader Planetarium 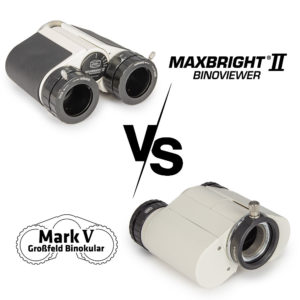 We have provided a detailed answer to this question, which we do not want to withhold from all other customers who do not have an account in the Astronomie.de forum.

Many experiences have been incorporated into the development of the MaxBright® II Binoviewer, so that the differences are surprisingly small. The Mark V Großfeld (Giant) Binocular is produced strictly according to Zeiss specifications by the same suppliers exclusively in Germany who had already supplied Carl Zeiss Jena. For the MaxBright® II, design, development, final assembly and quality control have been and still are carried out in-house. The assemblies and individual parts, however, are put out to tender worldwide and supplied by various suppliers in Europe and the Far East. This is done, among other things, out of self-protection in order not to transfer all knowledge (all design details) to a single supplier.

The Mark V offers the last percent more quality, not least due to the larger prisms, which together with the production in Germany pushes up the price, and is still the most elaborate binocular in our company history. The MaxBright® II is less inferior to it than the price difference would suggest; both meet the high quality standards we stand for.

The most important differences are: