This entry was posted on July 6, 2020 by Michael Risch 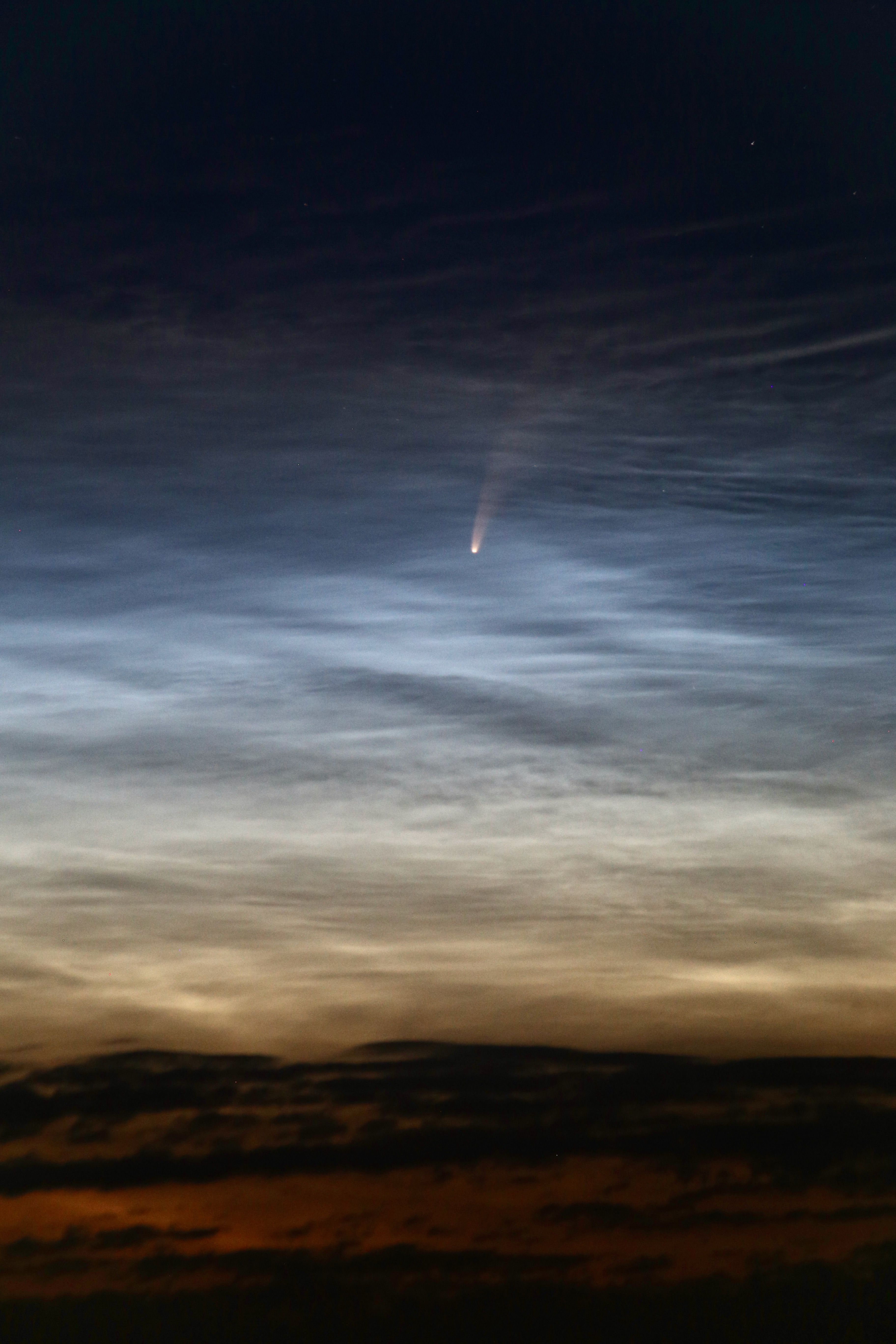 During the night of 7-8 July, the whole of Central Europe had the special opportunity to see two rare celestial phenomena simultaneously. Around 3 o'clock comet NEOWISE climbed over the horizon. Not much later, the sky behind the dark cloud bank just below the comet suddenly became much brighter.

As it turned out, the sun began to illuminate noctilucent clouds at a height of 80km (four times as high as normal clouds), which consist of frozen meteor dust. These rare clouds became more and more dominant and finally covered the comet until it was hardly visible around 4 o'clock.

NEOWISE with NLC over Mammendorf:

The NLCs moved towards the zenith, while the dark cloud bank moved to the south and the comet followed its path. Therefore it was difficult to get a photo on which everything is sharp. You need fast optics and short exposure times for this. In the wide angle photo you can see the train station of Mammendorf at the bottom right, above it shines Venus. This gives a good impression of the extreme brightness of the NLCs. 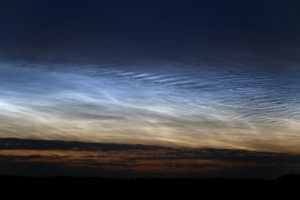 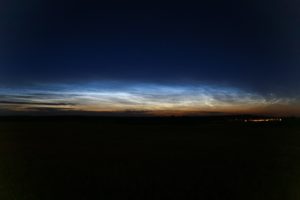 Here are some more impressive images that we have received: 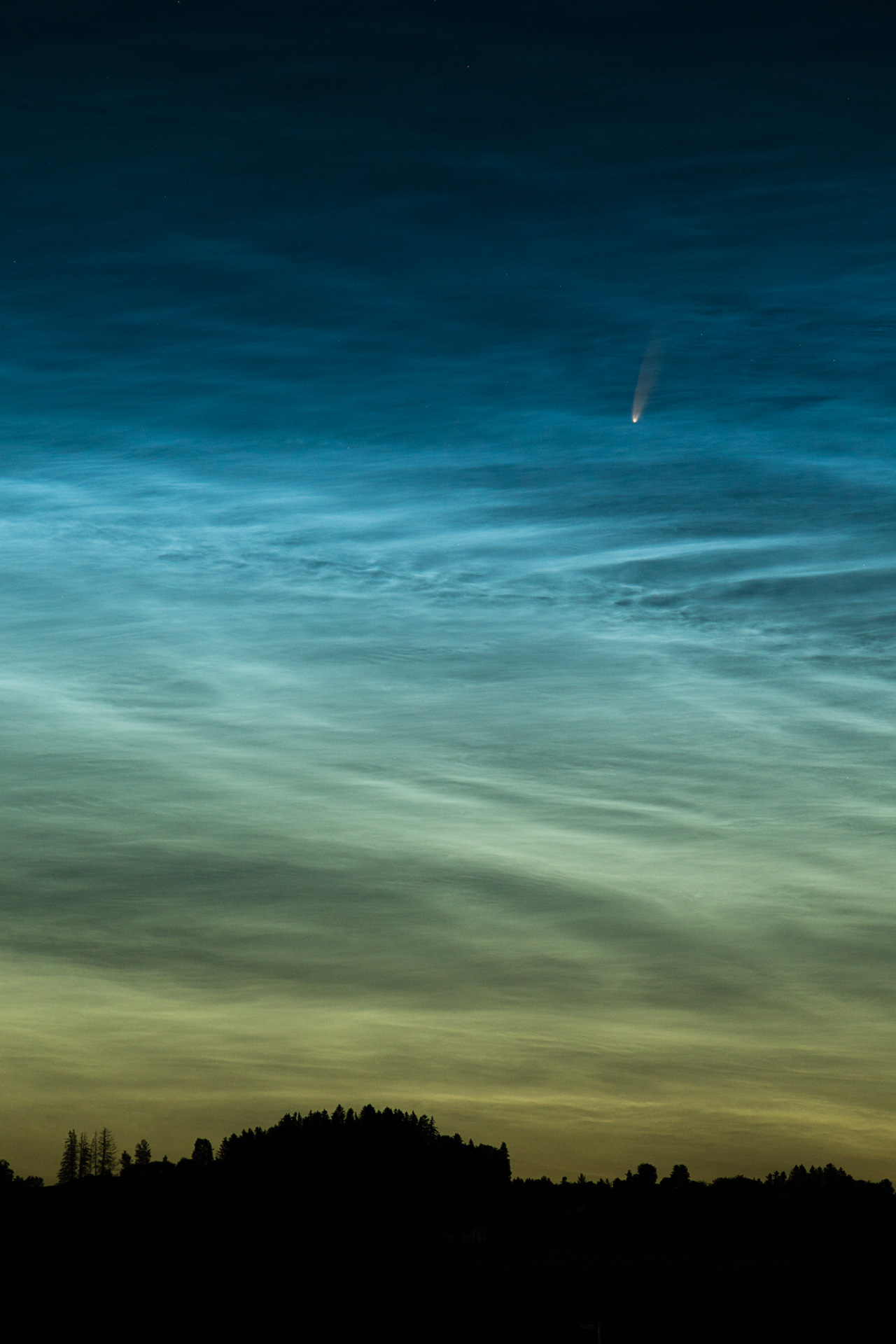 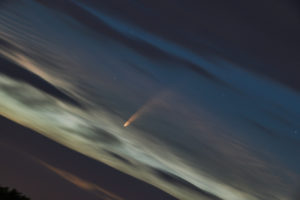 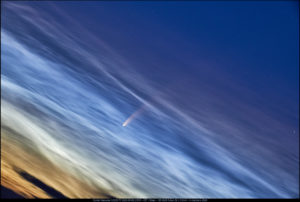 After the last two promising comets "crumbled" near the sun (among others Comet ATLAS C/2019 Y4, we reported), we did not dare to advertise for Comet C/2020 F3 NEOWISE in advance. But this comet now keeps what the others promised: finally there is a comet again, which can be seen with the naked eye! 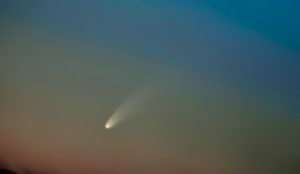 NEOWISE had its closest approach to the sun (perihel) over the weekend. The core was heated up considerably, the ice on the surface evaporated and carried dust with it. Therefore NEOWISE has at the moment a beautiful tail of about one moon diameter in the sky, which is wonderfully visible in binoculars. Astrophotographers can capture details inside the coma and tail already with telelenses but even more with telescopes. 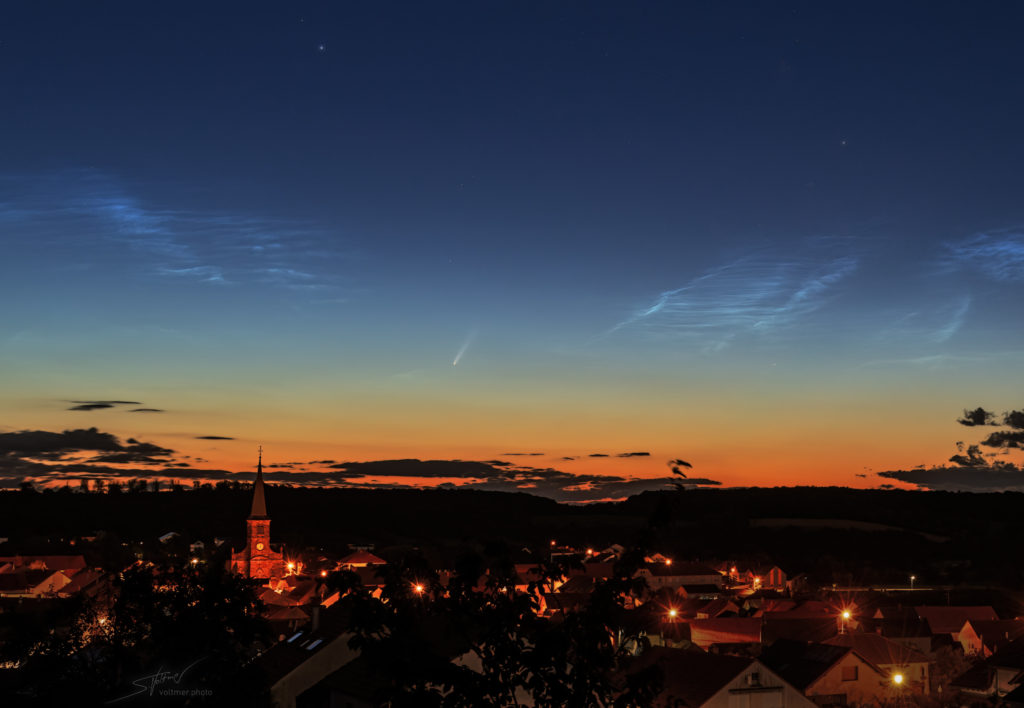 Our customer Dr. Sebastian Voltmer took a particularly beautiful photo of NEOWISE at dawn over the village of Spicheren on the morning of July 6th (see left). The comet is framed by so-called NLC's (Noctilucent Luminous Clouds), which are not different from ice crystals formed by meteor dust in the high atmosphere. And this meteor dust is partly from comets!

Our customer Michael Jäger took a closer look at the comet on July 4th and used a Celestron RASA 11 astrograph and a QHY 600M Early Bird camera to capture structures in coma and tail (see picture on the right).

At the moment NEOWISE is still visible only in the morning sky, which means you have to get up early to observe it. From about 4 o'clock on it can be seen just above the sky which is brightened by the approaching sunrise. Finding it is very easy: Capella as one of the brightest stars of the northern sky shows the way. It is visible in the northeast, if you have found it you only have to look down towards the horizon, turn a little bit to the left, that's where NEOWISE is located. If you want to know more about it, you can find a search map on TheSkyLive.com.

During the next days the comet climbs higher in the morning sky and from the middle of the month on it can be seen in the evening sky. As it moves away from the sun and approaches the earth, it becomes bigger, but probably fainter. Nevertheless it should be a nice object for some weeks at least for the observation with binoculars.