This entry was posted on September 2, 2020 by Christoph Kaltseis 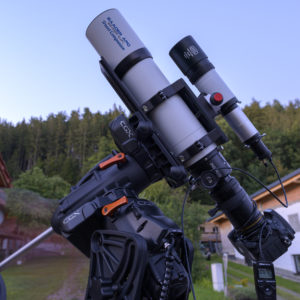 The CGX: A Versatile Mount For Everyone!

Recently I was able to work with the Celestron CGX, the Baader Apo 95/560 Travel Companion, the Nikon D810A and the StarAid Revolution as guiding system for the first time. Once again the results proved how much you can get out of a good system if you take some time to tweak the settings a little bit instead of simply working with the factory settings of the software without taking a closer look at them. 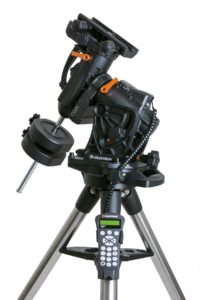 To get straight to the point: I'm really excited about what the CGX delivered last night!

For polar alignment, I used the star Regulus and the integrated AllStar Polar Alignment (ASPA) system of the CGX. My alignment routine only consisted of a 2-star alignment, with Regulus added as another calibration star. Then I let the mount slew across 2/3 of the sky to the star Vega. The CGX placed Vega in the middle of the field of view of the APO 95 and the Z6, with less than 5% deviation!

That's AMAZING, because it means that I don't need an additional high-precision goto, even with small sensors! In any case, high-precision goto is only intended for those times when the mount is badly polar aligned, anyway.
And the tracking accuracy? If the CGX is properly aligned using the CGX's ASPA routine, it works really well. Up to 30 seconds were possible without guiding. It's the same as with a 10Micron mount without the additional pointing model: balance the mounts axles, set it up with caution and perform a good - very good - polar alignment, then the CGX is TOP!

Excuse me if I have said this before, but again and again I hear and read – not only in the forums – that it does not matter if the mount is perfectly polar aligned, or if it is perfectly balanced, etc... this madness must be put to an end! Instead of two vectors (RA + DEC) or ideally one (with an ideal setup it should only be RA) to represent the tracking, we have to deal with four motion vectors at once (for RA + DEC + the drift in both Axes in plus and minus), plus the field of view rotation! This is still inconspicuous visually (and the CGX compensates for these deviations at least when slewing to each new object), but when tracking an object with a camera, this will harm the quality of the result! (Sorry, but that's my personal opinion – and nobody can tell me anything else; I've already had my discussions about this.)

Of course, I used an autoguider to do serious astrophotography, in this case the StarAid Revolution (Version A). With it, there were still round (or better: pin-point) stars even after 600 seconds – that's very good. The system just ran smoothly: the routines in the CGX are very practical and the gearbox (belt drive) implements the guiding pulses in real time.

The StarAid was only connected to a power supply and the guiding port; it is a real standalone autoguider without a laptop. The autoguiding starts automatically as soon as the StarAid is powered up. By the way, the StarAid Revolution is not only a standalone autoguider. It combines automatic polar adjustment and plate solving (in just 2 seconds) in a light, only 8 cm large body. This all-in-one astrophotography device replaces a specialised guiding camera and a laptop with various programs for guiding and polar alignment, and it can solve the biggest problems related to astrophotography – initialization and polar alignment are done with the smartphone, then it runs autonomously!

After what feels like 1000 years of experience with guiding I can only say again and again: "Guiding must be adapted to seeing!" This principle has been confirmed once again, as the CGX reacts very accurately to every control command.

That means: The StarAid guides the CGX in a direct manner. Everything is almost 1: 1 in effect.

That is why the guiding rate of the CGX has to be adapted to the seeing. In the case of the CGX, this is possible separately for both the RA and the DEC axis, as a percentage of the star speed. The standard value of the CGX is 85% of the siderial speed. If the seeing is bad, this will cause pendulum movements, but everything is still within tolerance. But if I reduce the rate to 50% – I even went as low as 35% per axis (the seeing was really ugh!) – the correction is only 0.5 PIXEL of the guider. The RA axis was in teeny-tiny overbalance towards the counterweight. Hence the movement from plus to minus in the RA axis. (I call it the "I'm already gone away" error.)

Clean interface in the web app

Focusing via the LiveView

The user interface integrated into the StarAid as a web app is opened via the smartphone browser and presents itself clearly. The guider can be focused with the LiveView. The "Auto exposure / gain" option works well. I would leave it as it is.
Please use the faint stars for focusing! The image section can easily be moved with the finger.

Below the settings for the LiveView, there is also the option "Capture Image". Here the image can be saved as FITS/RAW on the smartphone - but I didn't need that yet.. 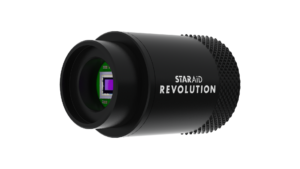 The calibration of the autoguiding runs automatically; the display informs about what is happening.

With the Revision B of the StarAid the autoguiding display was also revised and is now somewhat more open. Previously, you could just read here: "Please wait - calibration in progress". Now the axes are additionally displayed with + /-, where live values are inserted when the calibration of an axis in one direction has been completed. This gives you the feeling of a little more control and you can see what it is doing.

After that, the guiding starts automatically, like in version A.

Whether this is better, well... The waiting time is shortened, but at the same time many users will probably have the values in their heads, because the values are often not quite the same. In version A, you could only see these values after calibration if you were actively tracking. The axes were then listed in Ra and Dec + / -. In the end, however, this is only an additional display function; it works as independently and reliably as revision A already did.

Perhaps the most important innovation of revision B of the StarAid is the control of a DSLR including the option of dithering. To do this, you need a standard remote release cable with a 2.5mm connector for your camera. When the camera is in Bulb mode, StarAid can control the releases. In the "Capture" menu you will find all the settings for this. In addition, you can set here whether it should dither - to compensate for camera errors, the telescope is then moved a little during the recording pauses, so that pixel errors can be better calculated out later in the image processing. In this way, a whole series of shots can be processed and the progress can be tracked on the smartphone.

If you have a camera without Bulb mode, you have to manually adjust the releases to the StarAid. More about compatible cameras at staraid.ai/support/faq/#cameracontrol

And here is the result: 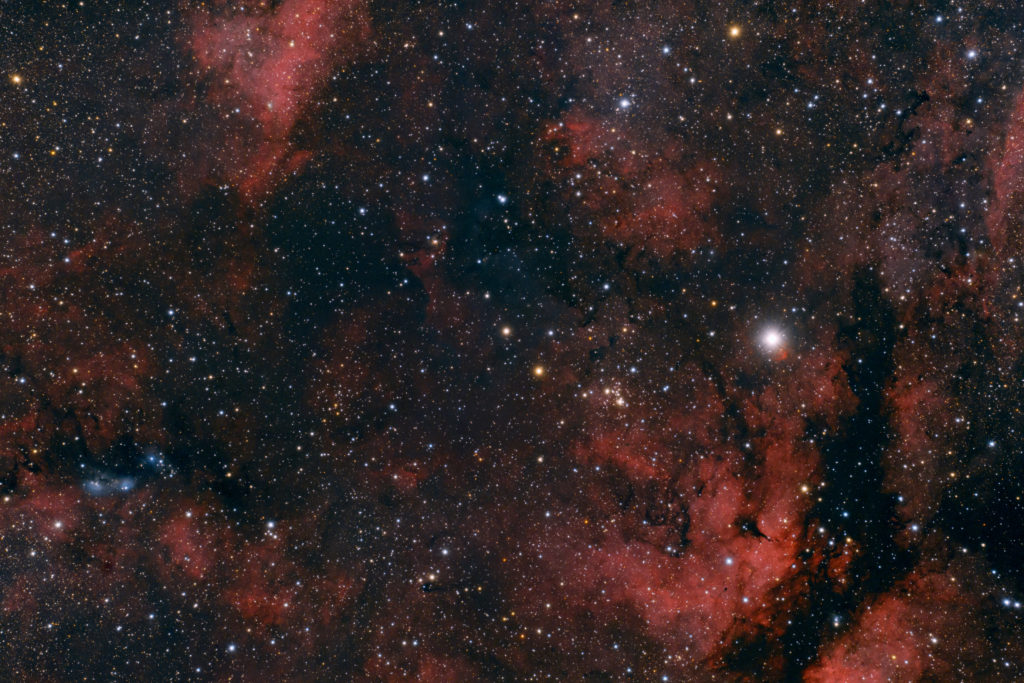 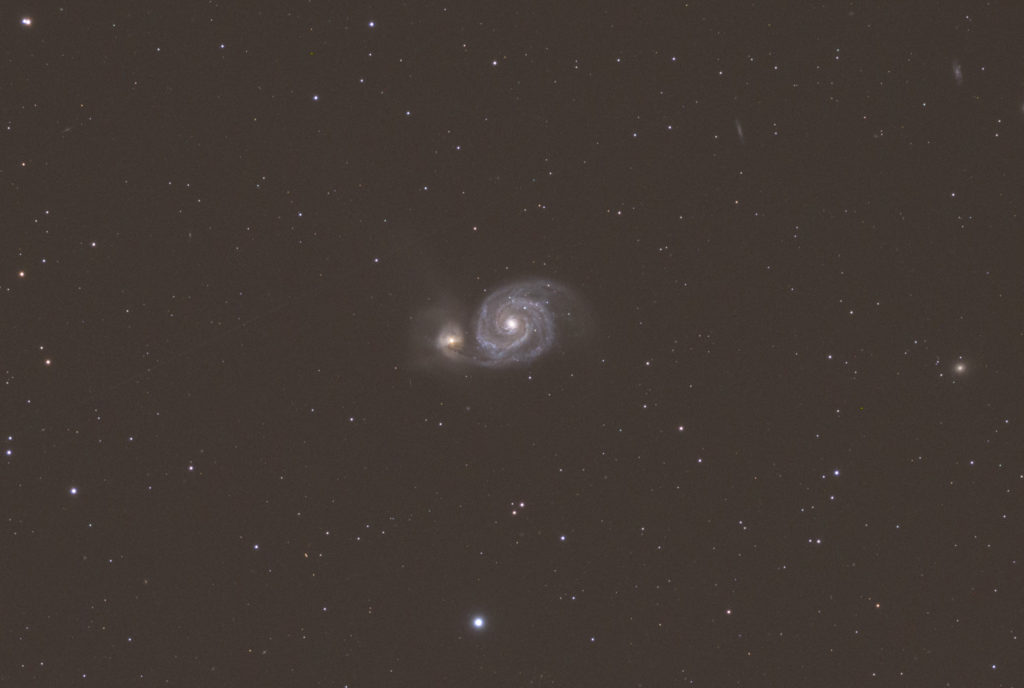 M51 with Baader APO 95 and the Nikon D810A; Celestron CGX mount and StarAID StarAid Revolution standalone autoguiding at 600s and in original resolution

After these experiences I am really looking forward to something else: The combination of RASA 8 + CGX is a really hot product, because I already got round stars on the APO95 / 560 for about 30sec without auto guiding ... and with guiding, hour-long narrowband imaging sessions are easy! For remote operation, the CGX has another great feature when it is operated through ASCOM and Celestron's CPWI control software: power failures are no longer a problem! The mount is then simply moved back to the home position, the last alignment is called up, and everything will be fine:-)