This entry was posted on October 14, 2019 by Michael Risch 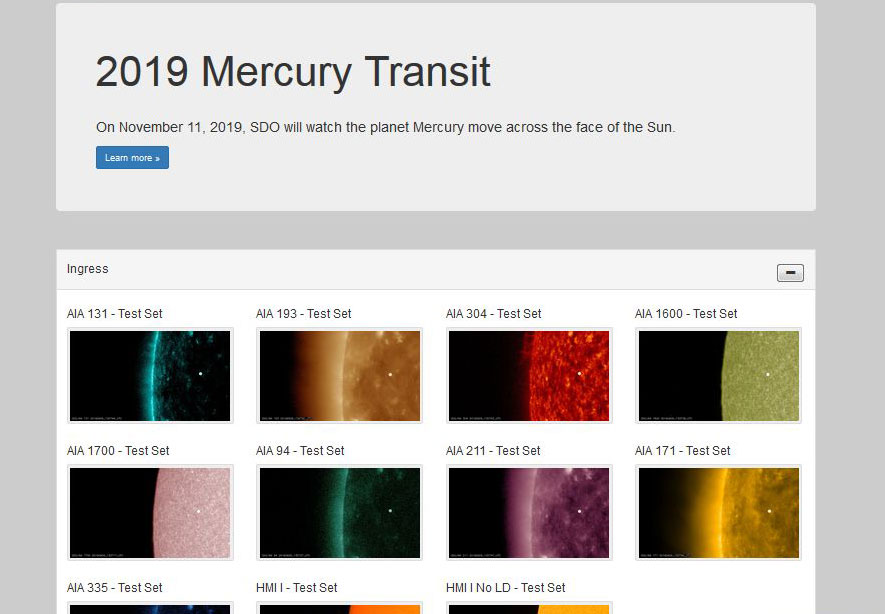 NASA is broadcasting the film sequences of the solar satellite SDO for all those who cannot observe the Transit of Mercury on November 11th 2019. The films will be available on https://mercurytransit.gsfc.nasa.gov almost in real time:

Starting around 1200 UTC (7:00 am ET) November 11, 2019, we will begin watching Mercury move into view against the corona of the Sun. This is about 45 minutes before it is visible against the Sun from the ground. We have created https://mercurytransit.gsfc.nasa.gov to let you watch this transit as short movies in almost real time. The transit lasts a little over 5.5 hours, ending as Mercury leaves the disk of the Sun about 1806 UTC but continues moving out through the corona for another 30 minutes. 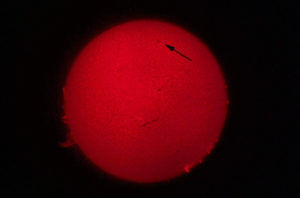 Here a H-alpha filter from SolarSpectrum was used to make the gas eruptions (protuberances) on the solar surface visible.

Only two of the eight planets of the Solar System circle around the Sun closer than our Earth: Venus and Mercury. These so-called "inner planets" (because they are inside of Earth's orbit) are the only ones which can be seen in front of the Sun sometimes. But this isn't as common as you might think: The planets don't orbit the Sun all exactly in the same plane – instead, their orbits are slightly tilted. 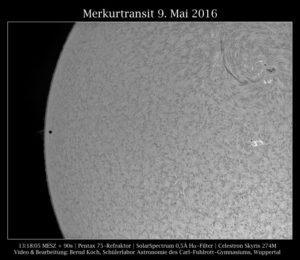 The last one was in May 2016 (Impressions of the 2016 transit of Mercury can be found on astrosolar.com).

The next one will be on November 11th, 2019, which marks the shortest possible period of time between two transits of Mercury. If you miss it, you'll have to wait another 13 years for the next one. So, it's worth to give it a try.

What, when, and where?

If you want to see the event by all means, you should travel south, where you can expect better weather conditions and where the Sun rises higher above the horizon than in central Europe. But clear skies in November can also happen in northern latitudes. So there is a real chance that you can observe it from your backyard.

Besides clear skies, you need a telescope as well as a safe solar filter if you want to enjoy the transit. Mercury is so small that is appears only with a diameter of 11 seconds of arc, so that it can over only 0,004% of the Sun's disc – and this is much too inconspicious to be seen with eclipse glasses or with a pair of binoculars which is equipped with solar filters in front of it. But if you have a telescope with a certified solar filter, then you can see how Mercury moves across the Sun as a small, black dot. The transit starts around 13:35, and you should use a magnification of ca. 150x to see Mercury clearly as a disc and not only as a little dot.

Then you can clearly identify it as a planet, and you get a feeling for the sizes of the members of the solar system. A transit of Mercury makes the solar system better graspable – you can see with your own eyes how a planet moves around the Sun, and this makes this event so fascinating.

But during a transit, you can do much more than just look at it or take some photos. If photos are taken from different locations at exactly the same time, and if you determine the exact position of the planet in front of the Sun with these pictures, then you can calculate the parallax and thus e.g. the distances of Sun and Mercury. You can find out more about this project at http://www.transit-of-mercury2019.de/index.php 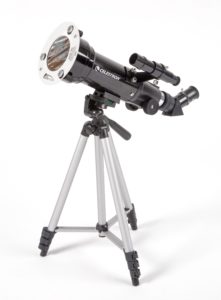 You do not have a telescope yet? 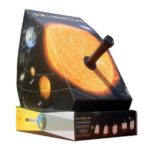 A very interesting and absolutely save way for observing the Sun is the Solarscope. It projects the image of the Sun onto a white plane, so that nobody can look accidentally at the real Sun. Above all, many people can see it at the same time. The larger Educational Model, Solarscope: Education (#2903405, € 125,-) shows the Sun with a diameter of ca. 11 cm, so that Mercury can be seen even better than on the 8 cm large Sun of the standard model Solarscope: .

The perfect entry telescope for observing the Sun can be found on www.celestron.de: The TravelScope 70 Solar System Edition

You can take photos of the transit of Mercury with every camera which delivers images on which the Sun is large enough to see the sun spots. For a DSLR, this can already be done with telephoto lenses with focal lengths of at least 200mm. You can find matching solar filters with our Baader Solar Filter Finder Tool

Do you already have a telescope? 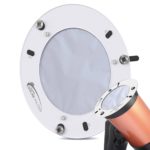 Alternatively, you can also buy mounted Baader solar filter; the ASTF-filters have got a temperature-compensating construction and are designed for long observations with a telescope. You can easily find the right filter for your telescope with our Baader Solar Filter Finder Tool. Please remember always to cover or remove the findersope, too. 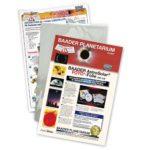 You can use the AstroSolar® ECO-size Safety Film 5.0, 140x155 mm (#2459286, € 15,-) for photography, too, especially if you want to capture the whole Sun. Only if you are working at high magnifications (e.g. with a Barlow lens or eyepiece projection), the image gets too dark, and you need the Photo-Film ND3.8 – but this filter mustn't be used for visual observations. 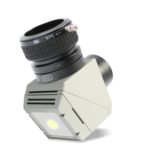 If you own a lens telescope with 2" focuser, then you can also use a Herschel Prism – this special glass filter is suitable for highest magnifications and is perfect if you want to observe the Sun regularly. Unfortunately, it can only be used with lens telescopes.