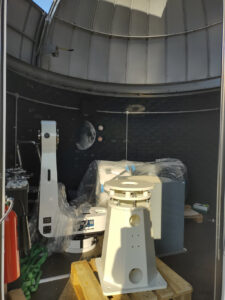 Mount and telescope all ready for the day's installation

The University of Hertfordshire's Bayfordbury observatory is primarily used for undergraduate tuition and is one of the largest teaching observatory facilities in the UK. It is located in relatively dark skies in the countryside about 6 outside the town of Hertford (about 30 miles north of central London) and includes seven optical telescopes permanently mounted in their own observatory, solar telescopes, four radio telescopes and some smaller instruments. Although primarily used for teaching, the observatory also run public outreach programmes too. More information on the courses offered and the activities of the observatory can be found here. 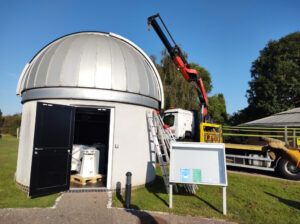 PlaneWave CDK600 which comprises a PWI L-600 alt-az mount and a 0.6m/24” Corrected Dall-Kirkham (CDK) telescope mounted on a 0.6m Baader Steel Pier and associated levelling flange. As the telescope would be operated in an alt-az configuration, the PWI IRF90 field derotator/focuser for imaging use with the observatory's large format cooled CMOS camera and filterwheel was also supplied along with its Electronic Focus Accessory (EFA) and the Delta-T Heater box for dew prevention.

Installation activities began on the afternoon before the “main installation day” in mid September. While our installation crew member was flying over from Germany to London Heathrow, our UK colleague spent time installing and configuring the necessary PWI software for the telescope and other accessories and making sure it worked with the other software on the existing observatory PC. This was followed by a software overview session to some of the observatory staff.

The installation day started early with blue sky and the weather being very sunny and warm – perfect for working. The telescope, mount and accessories were already uncrated/unboxed in the observatory and ready to go. After organising all the tools ready to start, the large crane arrived which was essential to lift and move all the heavy components. The first task was to lift the Baader pier onto the existing concrete pillar and drill the holes for the expansion anchors to secure the pier in place. The SDS drill made light work of hole drilling and in no time the sand-filled pier was secured in place, and the flange levelled ready to accept the L-600 mount and CDK24 telescope.Next was to attach the mount. Straps were placed through the Dec axis and around the base of the mount to make it easier to mate it with the levelling flange. It was then lifted and positioned on the Baader pier flange and tightened in place. The 8”-wide dovetail clamp was then attached to the fork arm of the mount ready to accept the telescope OTA. 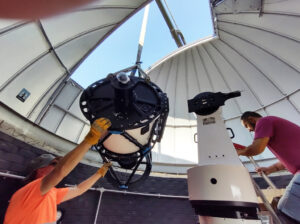 Hoisting the telescope to meet the mount 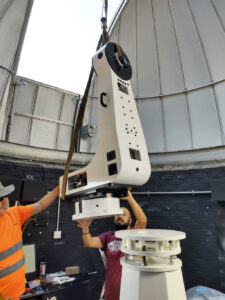 Lowering the L-600 mount onto the Baader pier and flange

After a well-deserved late morning coffee break and giving the observatory staff an update on the progress, the CDK24 OTA was strapped and carefully hoisted up to meet the mount’s wide 8” wide clamp. With the PlaneWave IRF90 focuser/derotator, EFA and Delta-T control boxes and the observatory’s camera and filterwheel attached, time was spent balancing the telescope configuration in altitude. By early-afternoon the big-heavy mechanical side of the installation was complete, and the helpful crane crew left.

The next and final part of the main installation was attaching the data and power cables for the PWI accessories and imaging camera and routing them around the telescope and internally through the L-600’s mount and some through the Baader pier. Great care was taken so that the cables were not snagging or put under tension through the full range of the telescope's movements. With the cables in place, it was time to power on the whole set up. So we switched on the mount.......nothing, no fan noise...nothing. Oh no we thought.....until we realised the main socket plug was not plugged in but once it was it all came alive and operated perfectly!  The lovely sunny weather had continued all day and there was a chance for clear skies after dark meaning we could configure the mount and perform the mount modelling that same evening. As the software had already been installed and tested the day before we just rolled into this job as the sky darkened.

The L-600 mount, like the other PlaneWave L mounts are direct drive, so they need to be tuned first. This is a simple process using the PWI4 software which controls 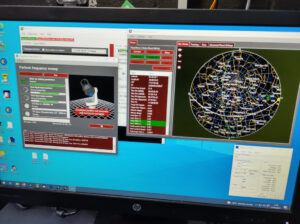 Tuning the mount with PWI4

the L-series mounts and which also includes an "auto tuner" function that optimises the drive motors for the mount's payload. A few minutes of different pitched noises coming from the mount it was tuned and ready to start its mount modelling. After auto-focusing 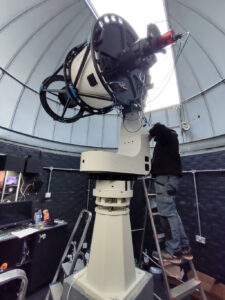 and a quick mount alignment we noticed that the image of Jupiter (our first light target) and that of a starfield showed that the telescope optics needed a minute amount of collimation. This is was easily sorted in a very short time by pointing the telescope at a star of suitable altitude so we could reach up and adjust the CDK's secondary mirror while watching a live windowed image-feed from the camera onto the large PC monitor. We then began an initial mount model consiting of 40 points. As the CDK telescopes can slew at a high rate, the telescope arrived at a "modelling point" in the sky well before the dome so we set the software to wait until the dome slit caught up with the telescope and then let the camera take the image. The image was then plate solved and added to the model and this was repeated until the end. After the 40 point model was computed and saved we then selected some deep sky objects to image before closing up for the night. For nearly all of the day we had a small camera pointed in the dome towards the telescope to record a timelapse of the installation and you can see the resulting video below.

The following morning we arrived back at the observatory to give the telescope a final once-over check, set up the game controller supplied with the mount which allows the L-600 to be moved with a blue-tooth gamepad via the PC and PWI4, did some more training as well as discussing the work and results from last nights session. After we chatted to the observatory staff and had a lunchtime coffee the members of the installation team left for home. This was a very nice and fun installation which went well and it nice to know it will be used by undergraduates embarking on their exploration and study of our amazing universe.