This entry was posted on September 23, 2022 by Lee Sproats 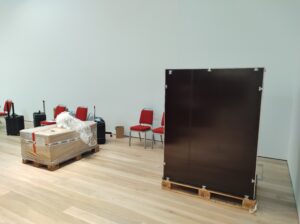 The University of Warwick hosted the Royal Astronomical Society National Astronomy Meeting (NAM) from Monday 11th July to Friday 15th July - this was the first main in-person attendance of a NAM since COVID hit a few years ago. Since the annoumcenent of the event, the organisers where overwhelmed by the positive response, with over 500 people registering to attend each day in-person. NAM2022 was also broadcast digitally to registered participants who were unable to physically attend which would allow as many people as possible to experience the conference and learn about the exciting astronomy and space science research currently being conducted. In addition to the UK’s astronomy community, the meeting also included the UK Solar Physics (UKSP), and the Magnetosphere Ionosphere and Solar-Terrestrial (MIST) communities as well as educators and science communicators/writers/journalists.

Baader Planetarium participated in NAM and our UK representative Dr Lee Sproats and Michael Risch attended the event to represent us. 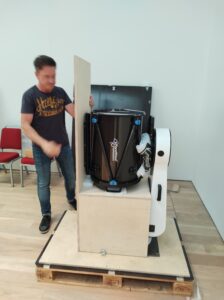 Michael Risch in the process of getting the PlaneWave L-350 and Delta-Rho 350 set up.

Late Sunday afternoon, the day prior to the offical start to the event, was scheduled to prepare and build up our display stand. On the Sunday Lee drove down to the University via Birmingham Airport to pick up Michael who had arrived from Munich and both then travelled to the venue to begin the set up. The stand set up began in the main hall where the science posters were being displayed as well as lunches and teas/coffees were served - an ideal location for attendees to regularly see our stand and chat to us. 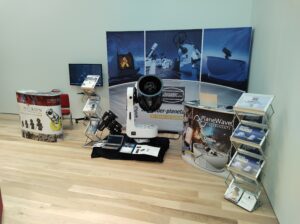 Our display completed and set up ready for visitors to our stand.

During the setup the informal welcome reception was underway and it was nice to meet and chat to some of the attendees that had already arrived.The crates housing the demonstration telescope and display material had arrived at the University the week beforehand and was at the venue ready for us for unpack.

The first job was to "de-crate" the telescope. This was easy as the scope was housed in a custom-made housing for safe keeping during storage and transport. The telescope was set up quickly, followed by the two kidney-bean pop-up tables and the large 3m x 2m back wall. By 830pm the stand was just about all done with just a few minor and quick tasks to complete for the following morning.

On a very warm and sunny Monday morning, the first day of NAM arrived. After a hearty breakfast we wandered to the exhibition hall and already there was a lot of people gathered discussing various topics.  Each of the conference days followed a similar routine -  the day began with talk sessions followed by a coffee break mid-morning and after another talk session there was lunch followed by another coffee break mid-afternoon. Monday and Thursday were expected to be the busiest days, with over 530 people attending. However the other days did not seem that far behind with a similar level of activity and interest. Over the course of our five-day attendance, we had lots of interest and plenty of good discussions with many of the attendees about the demo PlaneWave telescope, PlaneWave and 10Micron products in general and how they can be used, as well as our domes and services. 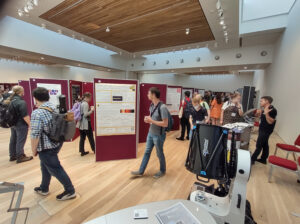 A photo of the exhibition hall where our stand was located along with the invited scientific posters. This was just before the rush for the first coffee break started on the first morning. 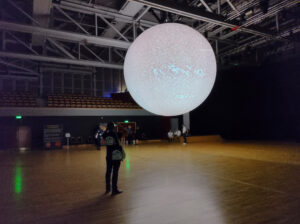 Although the event and its content is aimed at the professional community, there was a large public outreach engagement programme with the Sun being the primary target. On the Wednesday, a solar outreach day, for those interested in "live-viewing" of our star, outside the venue entrance there was a small telescope with a front-mounted solar filter which used Baader AstroSolar Film.

In one of the halls there was a really impressive exhibit - hung from the roof was a 7m diameter inflatable lightwork with an internal digital projector showing a continous loop of a pre-recorded video stream of the Sun in different wavelengths showing sunspots, active regions and solar flares. This exhibit is a collaboration between a British artist Alex Rinsler and Prof. Robert Walsh of the University of Central Lancashire - more details of this can be found on their SeeTheSun website.

On the Friday morning, the last day, the exhibits were packed away with the smaller items being transported in the back of a car and the telescope being re-crated for later collection and storage for its next UK appearance in September. NAM2022 was a great success with a great atmosphere, good conversations and a good selection of topics and lectures. It was also nice as the weather was, for the UK, unusually dry and hot too!