This entry was posted on January 12, 2016 by Dipl.-Ing. Wolfgang Paech

When I returned to Namibia this spring, I found my favourite planetary Celestron 14 SCT-OTA in a catastrophic condition. The Schmidt-corrector-plate was looking just plain filthy since someone had omitted to properly close the dust cap during all the rainy season. 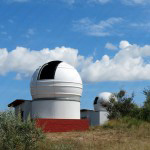 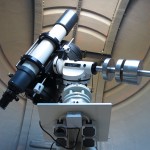 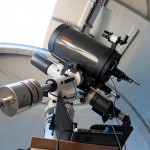 The telescope is located at the Onjala Lodge. The Lodge is a typical Namibian guest lodge, located approximately 80 kilometers east of Windhoek.

The telescope is commonly used for public viewing with guest of the lodge, but can also be rent by experienced amateur astronomers. The below image shows the main buildings of the lodge. The C14 is set up in the bigger - 4m - dome, the smaller one is 3m in diameter and is used only privately. 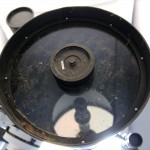 View of the extremely dusty Schmidt-plate 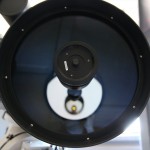 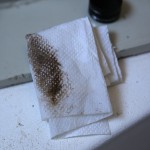 The image to the right shows what I saw. So I had to thoroughly clean all this mess. I did choose Baader Optical Wonder Fluid for this operation and it worked quite well.

The SC-plate was cleaned very carefully but intensely with Baader Optical Wonder Fluid. Images right shows a sheet of paper after the first rough cleaning and the SC-plate after finishing cleaning.

You really have to go some length, to catch the idea of checking the result of a freshly cleaned optics by shooting the moon overhead in bright daylight – but the Moon was hanging right there - so it came upon me quite spontaneously.

On a crisp and clear morning, contrast at the lunar surface is still so very good that the resulting images constitute a real reference, to demonstrate what an optical tube can do with proper IR-filtering, when it is completely free of haze caused by the usual assortment of dust or pollen - plus improper cleaning attempts. 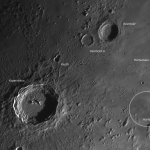 The instrument used is a Celestron C14 SCT at the Onjala Lodge/Namibia. The Camera was a SKYRIS 445Mono. The Raw-AVI-files (1200 frames) were taken on April 23rd 2014 from 8:30 to 9:30 UT with the Sun ~45 degree above the horizon. The first image (left) shows volcanic domes near the crater Hortensius which are quite difficult to observe owing to their moderate height.

The image shows the large crater Copernicus and the volcanic Hortensius-domes H1 to H6. Their diameters range from 7.6 up to 12.5 km. Crater summits measure about 1 to 2 km in diameter but only 190 to 390 m in height.
Having these fine structures become visible so strikingly in bright daylight requires a good optics and especially an effective IR-pass-filter. The Baader IR-pass really proved helpful here. With even the slightest amount of haze or straylight - or with any residue from the cleaning fluid left on the corrector, these results would have remained unobtainable.

The following images show more examples in bright daylight at the same day. From left to right: Kepler and Encke, Bullialdus, Lacus Tomoris and Hainzel. Right outside - due to perfect libration conditions - two difficult to observe large craters: Bailly and at the lunar limb Hausen 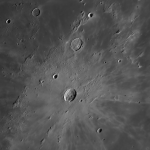 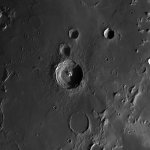 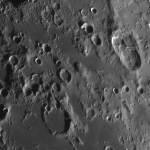 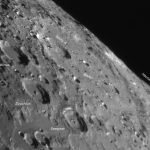