This entry was posted on July 6, 2017 by Team Baader Planetarium

The Avalon LineAR and M-Uno Fast Reverse Mount are equatorial mounts designed for astronomical imaging. With a load capacity of 20-25 kg (44 – 55 lb) the mounts are unrivaled in their construction, qualitiy and price, and are sutiable for both visual and photographic observations. The M-Zero offers the same technology. With a load capacity of 8-13 kg, the low weight and high quality of this mount make it the ideal companion for travelling observers and astro-photographers. The M-Zeta, with a load capacity of 20 kg - 20+10kg in Dual Dec. Mode, an altazimuth Single-Arm mount, continues Avalon's tradition of cutting edge design and top quality performance.

The main goal of Avalon was to bring the perfect mount for astro-imaging onto the market, with no plays and vibrations, assuring the highest precision and total reliability on the field. Every astroimager dreams of a very solid, silent mount working flawlessly, with a good portability and easy to align with the pole, of course providing well tracked images.

The engineers at Avalon Instruments wanted to completely fix any play or backlash issues, eliminating the excessive costs of the traditional mechanical devices used on equatorial mounts (worms and gears) and making a new transmission system, based on pulleys and tooth belts. A four-stages reducer is used. Those devices are used with great success for industrial mechanical applications, as they provide a perfect transmission of movements in a very linear way, eliminating any play and noise, at the same time assuring a very high precision.

Benefits of the tooth belt 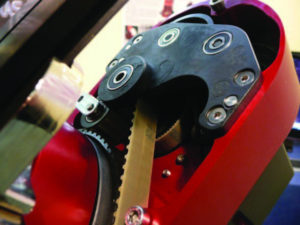 A tooth belt, which has no play for itself, is better than other mechanical devices because of its working principle. In the gear-worm systems, there is just one, tangent contact point between the working parts. Under these conditions, the lever arms and the efforts produced by the telescope-mount system introduce some small non-linearities in the transmission of the motion; they are visible as small shifts, evident in the images obtained with those traditional devices. Those small effects are proportional to the focal length, so they are particularly visible with telescopes having a long focal length.

The tooth belt transmission does not introduce these troubles, as there is no contact among pulleys and motion is transmitted by the belt with no play at all. The belt has an extended contact with the pulley, so the motion is transmitted by the tooth belt in a very gradual and smooth way, without “peaks” and accelerations/decelerations, typical of traditional gear-worm systems and giving troubles while taking images, even with modern autoguiding devices. Autoguiders, indeed, often are not fast enough to compensate for those sudden anomalies coming from the gear-worm coupling.

As every experienced astroimager knows, well calibrated autoguiders are unable to provide perfectly tracked pictures with traditional mounts, even when they employ gear-worm systems with small tracking errors. These anomalies are not recorded by the guiding telescope, as they originate between the guiding device and the mechanics of the instrument.

Thermal variations, flexures and torsions, especially close to the meridian, transfer plays and mass to the gear (which is in equilibrium) and the resulting effects introduce several oscillations, creating unwanted shifts and sudden movements.

It must be stressed that the Avalon mounts requires an autoguider (but it can be easily guided by hand, thanks to its smooth, gradual errors and the quick response of the commands, event at the lower - 0.125X – rates). Furthermore, because of the technology used, having four different, very slow tracking curves, the PEC function is not useful (as well as the software generally used to optimize the PEC performances, which do not contemplate such a complex case).

While the tracking error generated by the transmission devices is large in absolute terms (typical, mean values are of +/- 5, +/- 7 arc-seconds), this is no reason of concern: the mount, which uses a four-stages reducer with tooth belts, has a very slow and smooth error, well spread over the time, so that it is very easy to handle with any autoguider, even while doing images with long focal length (2-3 meters) telescopes. 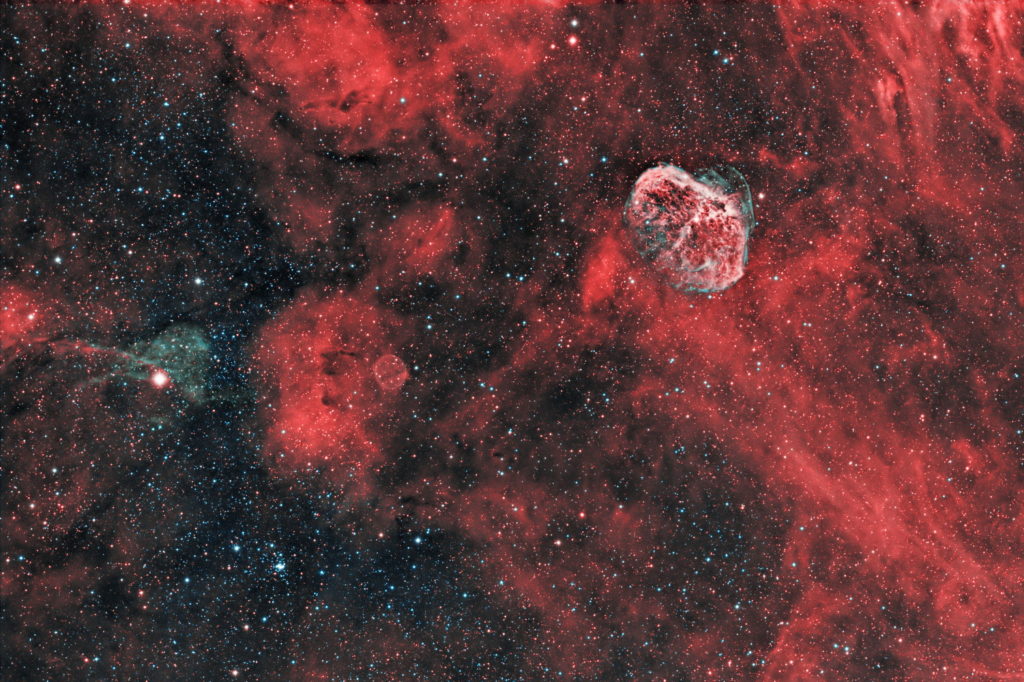 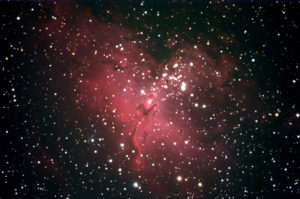 Since the very first tests, the manufacturer noticed how easy it was to capture very well tracked, long exposure images, matching the primary goal of the project. While visual observing with high magnifications, the absence of any noise and a very fast damping time are clearly evident, as well as the lack of any play or backlash and the immediate, smooth response to the electronic commands: We call it Fast Reverse because no play or unpredictable behaviours are seen, even with high payloads.

The mounts must be used with an autoguider and a slow correction rate, as 0.125X, but it is still possible to take unguided images with 500-600mm focal length telescopes.

The mounts  must be perfectly balanced – which is very easy to do, as the axes have no friction – because it has not the play troubles originating during the mass transfer while crossing the meridian. The transmission, based on four stages of reduction, introduces tracking errors which can be larger than those shown by traditional mounts in the same price range, but the absence of peaks and sudden accelerations makes possible perfectly tracked – autoguided - long exposures, even with more than 20 kg of payload and focal lengths up to 3 meters, competing with more expensive, higher class mounts.

The final result: perfectly tracked images, with ROUND stars. The positive effects of the reducers, using tooth belts, were clearly obvious since the very first imaging sessions: many tests were performed, with focal lengths between 1 and 3 meters and single exposures up to 30 minutes, without even a single wrong image. Some images taken using the LineAR, M-Uno and M-Zero mount are available here: avalon-instruments.com 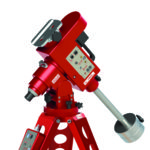 A side benefit from the tooth belts is that they don’t need any lubrication, so the mount has no grease inside. Also, thanks to a belt puller, the transmission system does not show any play, no matter the payload, the wear and the thermal variations. The LineAR mount does not use materials subject to wear or corrosion.

Once perfectly balanced, the LineAR mount does not need any further counterweight adjustment while in use, while the traditional mounts, with gears and worms, need it before and after the passage at the meridian to reduce the “pendulum” effect. Once properly adjusted, the counterweights work for every position, a property making the Avalon mount a great choice for permanent installations and remote observatories. 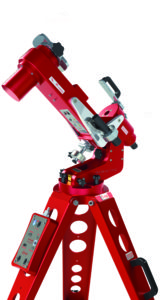 The classic equatorial fork mount has become a great success when used with compact telescopes (like the SC optics). Its stability and compact dimensions are among the reasons of its popularity. The Avalon M-Uno mount, adds to those benefits an outstanding sturdiness, as well as modern technologies to fix any residual problem. The special construction and design assure an exceptional stability, while the particular care reserved to the mount's basis eliminates any kind of vibration. The arm holding the optical tube can be adjusted respect to the polar axis to host tubes with different diameters and help to balance the system. The latter is particularly easy, because the axes have no friction and this helps reaching a very fine balance: this will eliminate any “pendulum” and mass transfer effect while crossing the meridian.

The M-Uno allows very long observing/imaging sessions, without any stop across the meridian, where typical mounts forces the observer to stop working, once the meridian is reached. This is a very valuable benefit not only while taking “pretty pictures”, but also while doing scientific works requiring a continued follow-up of the observed target. This makes possible the best optimization of the observing time, even when only a few hours are available, as the observer can immediately work around the best position of the sky for imaging, that is the meridian, knowing that the mount will go across it without any need to be flipped.

The M-Uno is a professional mount which is a native, single arm, equatorial fork, so it does not require any additional wedge to offer all the benefits of an equatorial platform, at the same time eliminating any source of vibrations. The care reserved during the production makes the mount extremely reliable, sporting outstanding performances, better than higher price competing products. Accurate photographic tests show that the M-Uno is capable to systematically grab single, well guided 30 minutes exposures, with perfect round stars. 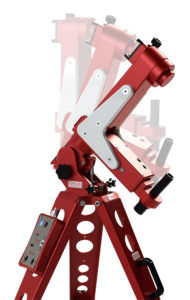 After the success of the M-Uno came up the desire for a smaller, more protable version. The result is the M-Zero, a new Equatorial-Altazimuth Single-Arm mount with Fast-Reverse technology. The M-Zero mount requires just a few minutes to be ready and long exposure images can be started within minutes.  The great versatility and compact size allows M-Zero to get you to a level where competition stops. With only 10 kg of total weight and 8 kg loading capacity, the M-Zero fits in a medium-sized trolley for safe transportation while traveling. The power requirements is very low with 0.5A at 12V. With the StarGo CoTo Control System it can also be controlled via Bluetooth or WiFi.

The components of the head” are directly made from a single block of aluminium, thanks to extremely high precision CNC machines with 5 axes. The whole process is done in a single session, never removing the part under construction. So, the resulting orthogonality of the axes is highly accurate, within a few thousandths of degree.

The belts used in the mounts are made of polyurethane , with steel inside. Polyurethane is an highly non-deformable technopolymer, with an high elastic module, so it keeps its structure unchanged over the time, even under strong efforts and large thermal variations. In addition a puller is used on each axis, to remove any play.

The pulleys, made by Avalon Instruments in its own factory, are made with a technopolymer using a glass fiber, providing an amazing dimensional stability. The Avalon designers created special, smoothed teeth, removing or minimizing every unwanted small variation in the tracking speed (a source of tracking error), which would otherwise originate because of the interaction between the belt and the pulley.

The Avalon mounts offer many solutions making life of amateur astronomers easier and eliminating many technical problems. For example: