This entry was posted on January 24, 2018 by Team Baader Planetarium 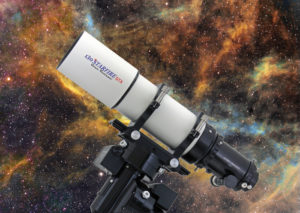 Keeping to the same quality standards that have made the fully-apochromatic refractors legendary, Roland Christen's company has been building German Equatorial GoTo mounts for more than three decades. Their proven stability, accuracy and durability is the reward for anyone who can endure the traditionally long delivery times. 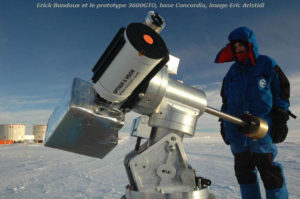 "El Capitano" at Dome C of the Concordia Station in Antarctica"

Two "el Capitan" mounts are working in the Antarctic for several years now, even at temperatures of -75°C. They are perhaps the most spectacular example of the durability of the sturdy Astro-Physics mounts and are representative for many more exemplars that often run for decades at our customers without failures. 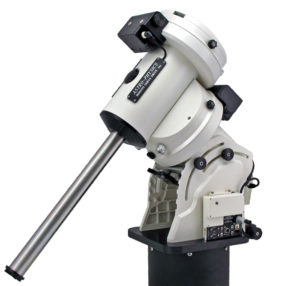 With a very accurate manufactured worm gear the Astro-Physics mounts are equally well-suited for smooth, effortless tracking of celestial objects as well as for all visual and photographic purposes. 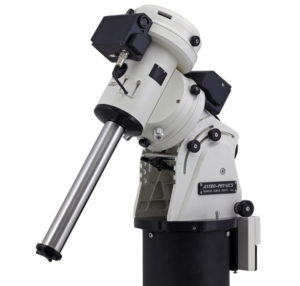 The separation of RA and DE axis and on the right: The CNC machined dovetail of the RA axis to accommodate the DE axis

The connection of the two components is achieved by a CNC-machined dovetail receptor clamp which has the same uncompromising stability. This is also used by "normal" dovetails.

In the case of the GTO3600, the declination axis can also be separated, but this mount is transportable only to a limited extent and better used as a stationary mount.

At the moment, the GTOMACH2 Universal Robotic Mount is the only mount of German design in its weight class, in which ALL cable connections to the telescope (CCD camera, electric focusing, etc.) are passed through the polar axis. The Mach 2 GTO replaces the long proven Mach 1 GTO of Astro-Physics. Universal Robotic means that Mach2 fulfills all of the requirements of a robotic mount for automated operation for imaging, satellite tracking, comet tracking, star survey work and others.

All parts of Astro-Physics mounts have been CNC-machined and milled out of solid aluminum. In this way, it is possible to circumvent the expensive, labor-intensive production of blanks made of aluminum sand casting.

By using state-of-the-art CNC machining techniques, where surface and angular(!) accuracies of 1 micron allow highly accurate fits, all "blind" volumes of axis and housing parts that do not contribute to the rigidity of the design are erased from the solid aluminum.

Due to the ingenious combination of two tapered roller bearings and three thrust bearings in each of the two housing parts, the axles themselves are even more relieved and stabilized by the shape of the axle housing. This results in a mount of high rigidity and freedom from vibration with a surprisingly low weight.

Features of GTO Servo Drive (applies to all 4 models) 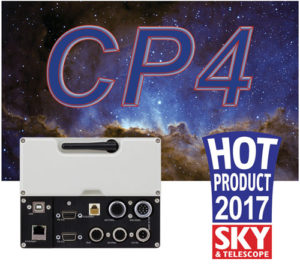 Why does Astro-Physics choose servomotors instead of stepper motors to drive their mounts?

The torque and thus the acceleration of stepper motors reaches their maximum value at low frequencies and drops sharply at high frequencies. Therefore, relatively large motors are necessary to develop enough torque for positioning at the required speeds. At low speeds, so like during normal tracking, such engines have far too much force and then often run uneasily, which can easily lead to vibrations of the telescope.

In addition, stepper motors have natural resonances. In these frequency ranges, the smoothness deteriorates again rapidly. Servo motors, on the other hand, are characterized by high torque even at high speeds, very good running smoothness over the whole speed range and higher efficiency. In order to obtain the same positioning accuracy as with stepper motors, however, a higher electronic effort must be driven.

All functions of the servo drive can be controlled from a laptop or PC. Astro-Physics has a fully supported, working ASCOM V2 driver for all Astro-Physics GTO mounts. This is the recommended method for controlling the mount with a personal computer under the Windows operating system. Please refer to this link http://www.astro-physics.com/index.htm?products/accessories/software/ascom/ascom für weitere Informationen und Links zu der ASCOM-Plattform und dem Astro-Physics V2 ASCOM-Treiber. 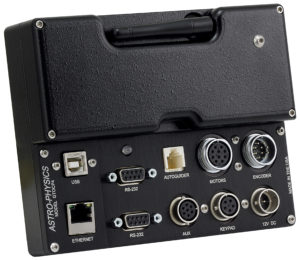 All GTO mounts produced since 1998 can easily be upgraded.

For the new GTO-Mach2 Universial Robotic Mount Astro-Physics has developed a new control system (GTOCP5) which combines the precision performance of the Renishaw Resolute Absolute Encoder with the whisper-quiet motion of brushless micro-step servo motors to produce a very accurate observatory-grade mount that can also be set up in just a few minutes in the field. The mount can be operated manually via the clutches or electronically with the encoder loop providing the pointing and tracking functions.

Some Features of the GTOCP4:

Further information and technical details about the GTO Control Box are available here.

GTo in Perfection via Handcontroller (optional)

ALL Astro-Physics mounts with servo motors are controlled via the GTO control system and can be operated completely via the keypad. The interface between the hand control and the mount is the GTO control box. It is mounted directly on the pole block, except at the MACH1. There, the GTO control box is attached at the tripod.

The Keypad can be used with all versions of the Astro-Physics GTO Control Boxes: GTOCP1, GTOCP2, GTOCP3 and GTOCP4.

The Keypad is intuitive and easy to use and is equipped with great features to make the observing session productive and pleasurable. Entering long, hard-to-remember keyboard sequences has been deliberately avoided.

This "handheld computer", which even cold winter nights can not harm, is the usual hand control box for controlling the mount equipped with a variety of options:

The control software can be updated via internet. A PC or laptop is not needed. If required, all mounts can also be controlled via the following external software packages:

Further information and technical details about the GTO Keypad is available here. 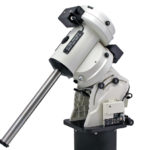 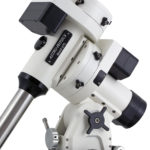 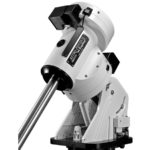 Delivered over a period of almost 15 years, the GTO 1200 is no longer available and will be replaced by the GTO 1600. The Mach 2 GTO replaces the long proven Mach 1 GTO of Astro-Physics.

Accessories for the GTO mounts from Astro-Physics

Of course, there are many mechanical accessories for the mounts - from the instrument mounting plate to dovetail clamps to the transportable pier. - For details, see our Astro-Physics price list or visit the Astro Physics website (www.astro-physics.com).