This entry was posted on May 30, 2017 by Team Baader Planetarium 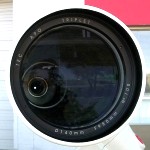 The first successful experiments with oil-spaced triplet-lenses were probably done by Wolfgang Busch from Ahrensburg, who had several discussions about this with Carl Zeiss Jena, back in the days of the German Democratic Republic. Even then, this technique was far superior to the standard technics like air-spaced or cemented lenses. But it was hard to keep the joining medium inside of the lens, because of insufficient synthetic oils and many other reasons. Because of this, the lens could freeze or dry out. It took Zeiss more than ten years of research to solve these difficulties and present the first APQ-lens. Besides Zeiss, only Astro-Physics and TEC were able to produce long-lasting oil-spaced lenses. It takes some tricks and knowledge to keep the oil (if the fluid can still be called oil) inside of the lens – at least over a long period of time with always-changing temperatures. But with the necessary craftsmanship and patience, it can be done.

Nevertheless, many people still think – wrongly – that an oil-spacing is especially prone to aging. This is surely true if you didn't master the technology, but we want to present a list of the pros and cons of oil-spaced lenses. Judge yourself!

Oil-spaced lenses are the best technology we are aware of to mount astronomical triplet-lenses – and to protect the inner surfaces of the lenses. It is very sophisticated and requires great knowledge and craftmanship which is the reason why it is done only by small manufactories, which have both a lot of experience and in-house production.