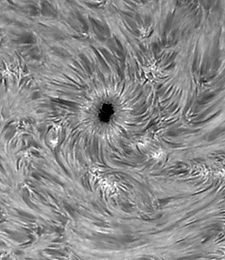 An experience and observation report on the new Baader Telecentric System TZ-3 and the Research Grade (RG) Telecom­pressor (TC) 0.4 for solar observation in the H-alpha light with SolarSpectrum filters

Successful H-alpha-observations of the sun with narrow-band line filters from the manufacturers   “SolarSpectrum” and / or "DayStar" require an almost parallel beam of light with a focal ratio of approx. f/30 directly in front of the filter, otherwise the filter will not work properly. This is not so easy with today's fast optical systems, which work around f/7. Such an opening ratio can be achieved either by masking (reducing) the front lens opening or by parallizing the optical beam with a "telecentric system" (TZ). * TZ: See also the supplement at the end of the report.
My "solar telescope" is an AstroPhysics refractor with an aperture of 155mm and a focal length of 1.085mm, the aperture ratio in the prime focus is f/7.

In order to use the filter without extending the focal length, the telescope's aperture would have to be reduced to approx. 35mm in order to realize the optimum f/30 focal ratio. It is clear that this is highly unsatisfactory – the resolution detail of solar structures would be severely restricted. The following image shows as an example the front lens of my solar telescope with a Baader Iris Diaphragm, masked to 35mm, 75mm and 110mm diameter (from left to right).

So far I have worked with the Baader TZ-2 (double focal length extension). With this setup, I had to reduce the aperture to 75mm to achieve an f-ratio of f/30.

However, I had often wanted maximized resolution for detailed studies in short time intervals, which, however, requires a larger telescopic aperture than 75mm. The Baader TZ-4 increases the focal length of my telescope to almost 4.5m. However, my usual seeing makes sharp images this focal length almost impossible.

With the new Baader TZ-3, my desire for greater aperture now can be fulfilled. The system was developed together with the Research Grade (RG) telecompressor (TC) 0.4x for telescopes with a primary aperture ratio of around f/10. The use of the TZ-3 on my telescope results in a secondary focal length of 3.250mm. So now I can work with an aperture of 110mm and this is more than sufficient in my seeing conditions.

In the first three weeks of June 2017 (in 7 days) I was able to test the TZ-3 and also the Reducer RG TC 04x. Both optical components are newly developed and have a clear aperture of 46mm, matching the SolarSpectrum Research Grade filter with 46mm clear opening. With a focus distance of 250mm, even visual H-alpha observations with binoviewers are possible.

My main interest is the photographic H-alpha observation, so this report also describes almost exclusively the photographic use of the TZ-3 and the RG TC 0.4. Although the activity of the H-alpha sun is currently not really impressive I've got some pictures that shows usefulness of this application and the high visual quality. 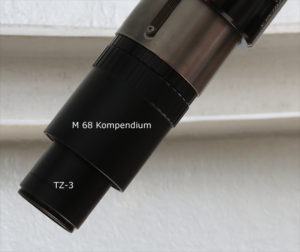 Installation of the system

Due to the rather high overall length (the opti­mum focus position is 250mm behind the last lens center of the TZ-3), I've mounted the telecentric system inside of an M68 telecom­pen­dium.

Attached to the telecompendium are the SolarSpectrum filter, a Baader SolarShield for visual observations, some M68 extension tubes and a star diagonal (prism) with eyepiece or  webcam for photo­graphy, all connected via sturdy 2 inch adapters. The optics of the TZ-3 is mounted isolated and flexure-free inside the compendium, which is connected directly to the focuser via the large M68 thread. 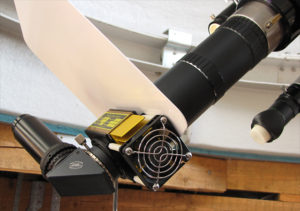 The first visual observations with an old 40mm eyepiece from Zeiss (see illustration on the right) showed a crisp sun with detailed structures: surface structures, distinct spicules on the sun's edge, and protuberances in front of a dark, streak-free sky background.

An important note for visual observations: If a Baader mirror star-diagonal is to be used for the image deflection, a BBHS mirror with silver coating MUST be chosen because regular mirrors reflect the light only insufficiently at the H-alpha wavelength. On the other hand, any prisms can be used without problems.

My main interest is "Lucky Imaging" photography with webcam video modules. So I took up the first test pictures to get an impression about the imaging scale at triple focal length - and especially the 0.4-fold RG telecompressor.

The following picture shows a prominence at the solar rim, the raw-AVIs were taken on June 1st. 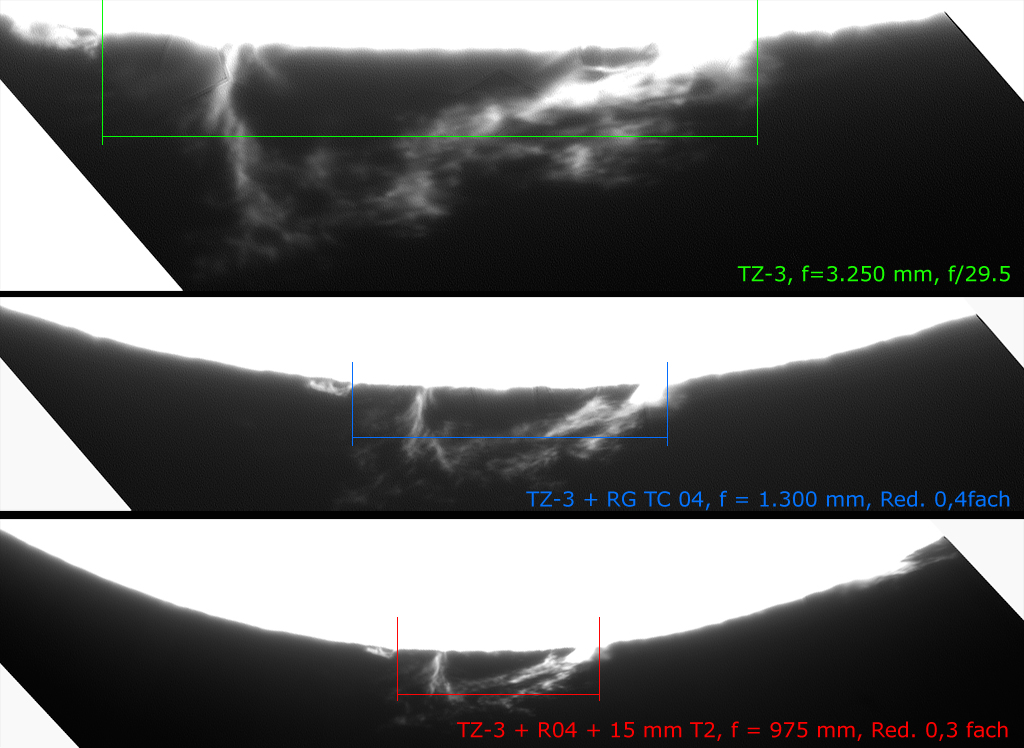 The length of the protuberance in the horizontal direction was simply measured with Photoshop, and thus the reduction factor of the RG TC was determined 0.4 times.

The upper picture shows the protuberance taken with the TZ-3 at a focal length of 3.250mm (green).

The center image (blue) shows the protuberance taken with the RG TC 0.4, which is mounted directly behind the SolarSpectrum H-alpha filter, with the camera sensor placed exactly at the required distance of 76mm behind the compressor. The reduction factor is actually 0.4 times with an effective focal length of only 1.300 mm.

Such a protuberance image does not, of course, state anything about the edge sharp­ness of the field of view, but later test images of the sun's surface have shown that the imaging quality of the RG TC 0.4 is evenly good over the entire field.

Lower picture (red): Since I knew from the use of my TZ-2 system with the old TC 0.7x telecompressor that the reduction factor can be reduced even more, if the distance between compressor and camera sensor is increased, I have also tried this on the RG TC 0.4 with a distance of 76 mm increased to 91mm. To do so, I used a 15mm T2-extension.

The reduction factor is thereby reduced from 0.4 to 0.3 times and the resulting focal length is then only 975 mm.

Thus, the complete system can be adapted very flexibly to the available seeing conditions. This is a very important point for me, because the seeing during the day is anything but optimum at my observation site.

But now I would like to show some test and comparison pictures, which I took with the TZ-3 and the RG TC 0.4 between the 1st and 19 June 2017 with the following equipment:

NOAA 2662 was one of the very rare sunspots whose penumbra is surrounded by a bright ring. The superpenumbra, which surrounds the normal penumbra spirally, is also visible in both pictures. The image field is uniformly sharp, the image resolution high, clearly less than 1 arcsec.

The second example demonstrates the reduction of the focal length with the RG TC 0.4 Reducer and shows an H-alpha activity range (without visible solar spots in white light) on 1st of June. The left image was taken with the TZ-3 at f = 3.250mm and the right one with the Reducer RG TC 0.4 mounted behind the filter with f = 1.300mm.

The high detail resolution (<1 arc second) is clearly visible in the left picture (TZ-3). The right picture shows a very clear increase in the image of the field of view when using the reduction of the focal length with the RG TC 0.4. The image is uniformly sharp over the entire field of view, even in the edges.

The next picture shows an example where the reduction of the focal length is useful. The comparison shows a larger protuberance group of 5th of June, on the left with the TZ-3 and on the right with the Reducer RG TC 04. 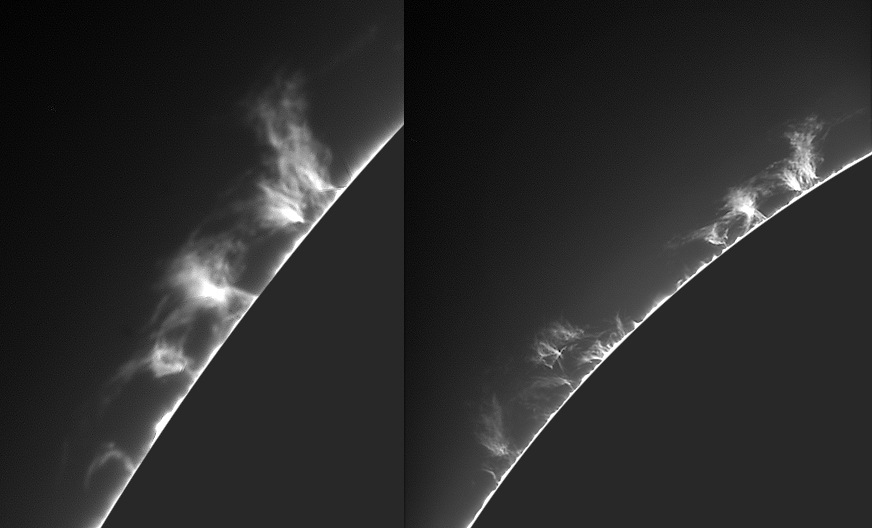 The long focal length of the TZ-3 shows only a part of the protuberance group. Only by reducing the focal length, the entire group is visible in the now larger field of view. The solar disk was coverd with a mask in the later image processing.

The next example shows the activity area NOAA 2662 on June 18th, where it was useful to shorten the reduction factor of 0.4 times by using a 15mm T2 extension between the reducer and the acquisition chip to 0.3 times to enlarge the field of view.

A further example of the use of a T-2 extension is shown in the following compari­son. It shows the active region NOAA 2661, recorded on June 2nd. Image sequence as above. The increase in the field of view with reduced focal length is clearly visible.

Another example for the use of the RG TC 0.4 is the recording of larger areas as a mosaic or panorama. The picture shows a mosaic of two images, taken on 18 June with the RG TC 0.4. On the left is the region NOAA 2662 with two large filaments and on the right is NOAA 2663, already close to the edge of the sun.

As final example, I show the comparison of an active H-alpha region (without a visible solar spot in white light), recorded with the TZ-3 at f = 3.250mm focal length and 110mm aperture.

The images were taken on June 1st and 2nd. They show the change in an active H-alpha region at a distance of only 24 hours. The picture is intended to demonstrate that with the long focal lengths of the TZ-3, even during times of very low sun activity, it is worthwhile to carry out detailed sun observations!

It can be adapted at any time to any ambient conditions via the flexible focal length reduction. Pictures taken with the TZ-3 show an enormous detail, the image resolution is under 1 arcsec at a telescope with 110mm aperture, and the pictures are sharp over the entire field of view, up to the edge of the picture.

Due to the variable reduction of the focal length with the RG TC 0.4 and, if neces­sary, an additional T-2 extension, I can easily adapt it to the seeing conditions and the required field of view. A further advantage of the RG TC 0.4: The exposure times of the individual images during the recording of an AVI-file are dramatically reduced, and even in the case of mosaics, time is saved because fewer single images are required.

All in all, this systems is an optimum solution  for me to be able to operate my solar telescope with an aperutre of 110mm, therefore

5 stars for mechanics and optical performance of the TZ-3 / RG TC 0.4 and again

5 stars for the company Baader Planetarium, which is continuously expanding and enriching the observation possibilities for amateur astronomers through their own developments.

*Telecentric systems are NOT equated with barlow lenses! Barlow lenses also extend the primary focal length of a telescope, but do not produce a parallel beam path.

ONLY with a telecentric system, a parallel beam bundle is created and ONLY thus a uniform representation of chromospheric structures is ensured over the entire image field of the telescope.