This entry was posted on June 9, 2022 by Michael Risch 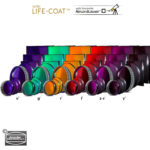 Even today, amateur astronomers can still contribute to scientific research. For example, our new photometric filters now open another window into the depths of the atmosphere of the planet Venus.

Venus amazes researchers. It is as big as the Earth, but extremely different from it. Venus is a hellish world with temperatures of up to 450 degrees at the surface. The reason for this is an enormously dense atmosphere, which generates a pressure that only exists at an ocean depth of 900m on Earth. This atmosphere consists of 90% carbon dioxide, a dense layer of sulphur dioxide clouds makes it opaque to us. There are only a few narrowly limited wavelengths in which a space probe camera or even a terrestrial telescope can hint at what lies beneath the cloud cover, which for the visual observer is simply brilliant white and contourless.

It has been known for some time that various structures in the clouds are visible in ultraviolet light. The US space probe Mariner 10 delivered the first images during a flyby in 1974.

They show the clouds at an altitude of about 60km. It was not possible to go deeper with the technology of the time. With our 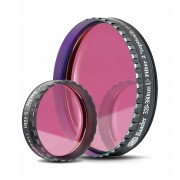 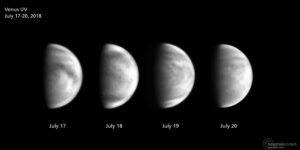 The atmosphere of Venus, captured with a C11-telescope and Baader U-Venus Filter. Credit: Sebastian Voltmer

Exemplary are the photos of our customer Sebastian Voltmer. The origin of these structures is still not completely clear. 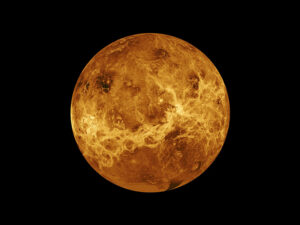 It was not until 1990 that the US Magellan Venus probe was able to map the surface of our sister planet in detail using radar. For the first time, a solidified world without seas and continents became visible, with numerous extinct volcanoes, but only very few meteorite craters in the highlands and lowlands. 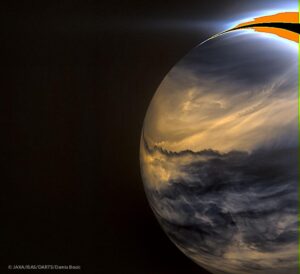 The question of whether the very bottom of the surface can really only be explored with radar, or whether the infrared radiation of the hot rock can be recorded directly with appropriate technology, could only be answered decades after the Magellan mission. The best results so far have been achieved by the Venus probe Akatsuki. Its infrared photos show not only a completely overexposed day side of the planet, but also the almost ghostly infrared glow from the depths of the planet on the night side - and above it the sulphur dioxide clouds as dark shadows

In 2021, images of the Parker Solar Probe gave an idea of how far we still are from a complete understanding of Venus' atmosphere. On its way to the Sun, this probe passed Venus several times and delivered images with instruments that were actually intended for observing the solar corona. To the amazement of the scientists, photos of the night side of Venus very clearly showed the surface structures known from the radar scans of the Magellan probe - in the infrared part of the spectrum. This is thermal radiation directly from the surface of the rock. No scientist had expected these results. It is still a subject of discussion why the photos show the surface 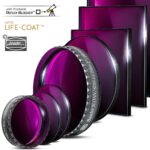 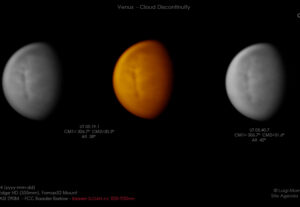 Venus Cloud Discontinuity, captured by Luigi Morrone on 4th of June 2022 with Baader SLOAN-Filter.Find the original article on spaceweather.com

As the well-known website www.spaceweather.com reported on 8.6.2021, a strange effect was rediscovered in the course of amateur monitoring of the Venus atmosphere: the so-called "Venus cloud discontinuity". Equipped only with a Celestron C14 telescope and using a Baader SLOAN z` near-IR filter, it was possible to visualise a wall of cloud thousands of kilometres long which circles Venus at high speed.

This structure has been the subject of research since its discovery by the Japanese Venus probe Akatsuki, and it is thought that by observing it, we can gain insights into the extremely fast rotation of Venus' atmosphere. Amateur astronomers are encouraged to help investigate the phenomenon. This pdf explains the observation techniques.

Actually, the SLOAN filters are designed for photometric measurements, i.e. for determining the physical properties of stars in particular. Using these filters on planets and thus contributing to research is again proof of how creative amateur experiments with new technology can complement professional research. Surely many more amateur astronomers will try out more new ideas with our filters in the coming years. We are happy about any report on this, which we will gladly publish in our blog.