This entry was posted on February 2, 2022 by Lee Sproats

Just before Christmas I returned to the UK University of Central Lancashire's Alston observatory to finish off installation work that was started a number of weeks earlier. The completion work had to be put on hold due to a couple of factors and for scheduling reasons too. You can read more about this first visit here. 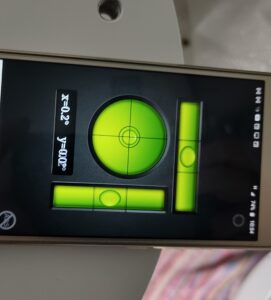 Checking the level of the top of the levelling flange. We think thats fairly level! 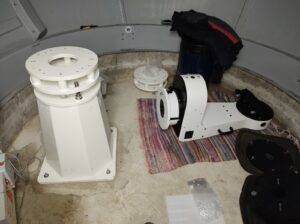 Working on the partly dismantled telescope

The morning of this visit's first day involved a partial dismantling of the set up. With help from Dr Mark Norris (who leads the teaching at the observatory) with some of the heavy item lifting, the L-mount was first removed and laid carefully on the floor followed by the wedge and pier flange. A new pier flange was then fitted, levelled and secured, followed by the reattachment of the L-350's wedge (taking time to get it pointing as close to true north and the correct elevation to minimise any later adjustments) and then the L-350 itself was then lifted back in position and bolted to the wedge. Due to afternoon teaching commitments, Mark left to return later, leaving me to continue some other work involving the set up of their observatory PC. All the necessary and up-to-date PlaneWave software was installed followed by their QHY camera software and drivers and MaximDL which is required for doing the mount modelling. All the software was tested and worked as it should. The observatory's imaging camera was also equipped with its Baader UFC accessories ready for connection to the telescope. The remainder of the day involved discussing/training on how to operate the telescope/camera and doing the necessary mount modelling. 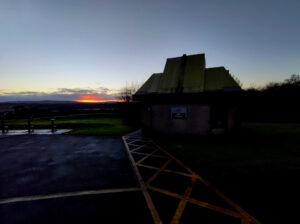 The following day started with a lovely sunrise over the observatory buildings - a nice sight to behold to start the day's work activities. The first task was to balance the telescope. From the previous visit we had marked the DEC balance point for the telescope with all accessories attached but what was left to do was to balance the mount in RA. We knew that the mount was "fork arm (heel) side heavy" so the fork arm end of the mount needed to be moved inwards towards the RA rotation axis.

PlaneWave make this a relatively easy task to do without detaching the complete L-mount from the wedge or a pier. The first step was to remove the mount's access coverplates, unplug it's power and data connectors and safely store the cables to avoid them being damaged during the removal and reattachment of the fork arm assembly. There are six hex-bolts that hold the L-mount to its drive base. With the mount's arm pointing down towards the ground these bolts can be removed without the worry of the mount falling from the drive base as there are two shoulder bolts that are located in keyhole shaped openings on the drivebase top plate to keep it in place. With help from Mark we gently pushed the mount upwards and then away from the base and laid the mount on the ground cover. On the underside base of the mount there are two pairs of six holes and the shoulder bolts were each in the "factory default position". These bolts were unscrewed and were moved to the last hole meaning that the arm was in towards the RA axis as far as it could go. The mount was then reattached to the drive base, secured with some bolts and the telescope attached. 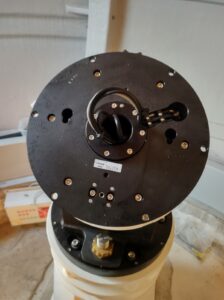 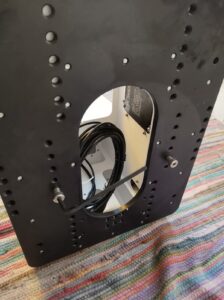 We found that the mount was now too heavy on the opposite (telescope/toe) side. The above procedure was repeated but now moving the shoulder bolts to an intermediate position. After reattaching the mount and scope we found that the balance was much better but just ever so slightly telescope/toe-side heavy - but not by much all. To get the balance "even more perfect" Mark proposed an idea was put into practice. A bag of bolts (used for balancing purposes on old telescope!) hung off the side of the fork arm and additional bolts were added to the bag until perfect balance was achieved - all that was needed was a few hundred grams of bolts. A small plastic electrical junction box was found that was the perfect size and fit for the volume of bolts and also for fitting to the fork-side base. The box was drilled and bolted to the base of the fork arm and then the lid screwed on to keep the bolts securely in place. This was a simple, quick and a neat solution for fine balance...and it actually "looks quite the part too!".

With the telescope attached and the whole system balanced, the job of data and power cable routing was then done taking time and care to make sure there was no strain or snagging on the cables. Cables were then labelled and the mount access coverplates were then replaced and then the observatory PC was brought into the dome and set up temporarily next to the telescope. With the PC now powered up, the mount and camera were all detected and other software tested for proper operation. After a well deserved coffee break, it was time to tune the mount's direct drive motors. This is a simple task that is done through the PWI4 software and took about 20 minutes, with the mount making different pitched noises as it progressed through its tuning cycle. 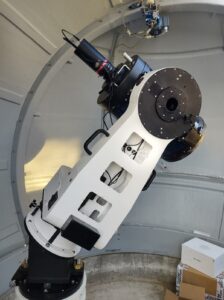 Performing the cable routing. The black box is the "fine balance weight" described in the text 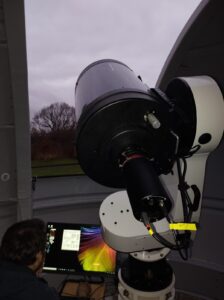 Just waiting for the sky to clear!

The observatory enclosure is operated through ACP Observatory Control Software and after a few changes with some of its  settings, the software picked up the pointing position of the telescope and moved the dome accordingly. Although it was cloudy, using PWI4 to control the mount was slewed to different parts of the sky to check operation and how the mount was performing where the RMS was typically 0.03"-0.05" on both axis.

Now it was all systems go!

Updates: Contrary to the weather forecast for that (final day), later on in the evening there was a short period of partly clear sky which allowed Mark to take a quick "first light" image of the Moon and then later on obtain a "quick" 40-point model using a random grid pattern and with no mechanical adjustments the telescope pointed at a target and it was dead centre in the field of view. 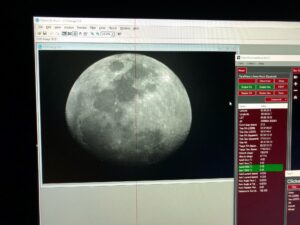 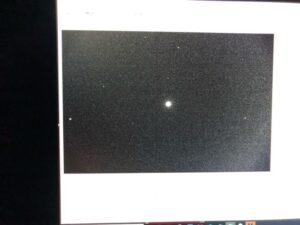 5th Jan 2022: Mark used the telescope to track and image the movement of the recently launched James Webb Space Telescope (JWST; Where is Webb?) showing a change in its apparent brightness, and which is on its way to the L2 point in space.