A report on visual use of the Baader H-Beta 5.5nm CMOS filter

This entry was posted on November 18, 2021 by Team Baader Planetarium

In the summer of 2021 I approached Baader Planetarium to ask whether I could test the new Baader O-III Narrowband-Filters (6.5nm) – CMOS-optimized (various versions available) to explore its visual capabilities for binocular observation of galactic nebulae. To my delight and surprise, Messrs. Baader offered not only to provide on loan the 6.5nm OIII Filter which I had requested, but also a prototype of the Baader H-Beta Narrowband-Filter (5.5nm) – CMOS-optimized (various versions available) now available on the market – and to do so in pairs in both 1.25” and 2” filter cells! 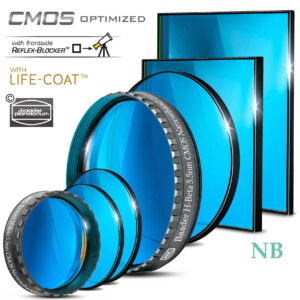 I must admit that, initially, I had no particular expectations of the 5.5nm filter. For I, too, had allowed the prevailing myths about H-Beta obervation to cloud my view. These myths include: 1) visually the image already becomes too dark with 12nm H-Beta filters and even more so with tighter filters, 2) very few objects profit visually from H-Beta, and 3) these are only observable under excellent skies and with large apertures. Nonetheless, I was pleased by the confidence that Messrs. Baader placed in me and was impressed by their pioneering spirit, so I gave it a go.

In the second half of the night from 3 to 4 September 2021 sky quality had reached NELM 5m4 – the best I can hope for in my suburban garden – and Perseus had climbed high by this time of night. So I turned the 10x70 binoculars to the California Nebula NGC 1499, placing, one after the other, three types of H-Beta filter pairs over the eyepieces. My observing notes read:

In lieu of a sketch I refer to the photo shown here. This gives a good impression of the size of the nebula as seen with the 5.5nm filter pair on the eyepieces of the 10x70 binoculars.

I really saw the nebula over this extent – naturally not in such contrast or detail, but in this size. HD 26311 is the bright star (visual brightness: 5m7) close to the bottom edge of the photo. The photo also gives an idea of the fishfin feature in the northern flank of the nebula opposite to Xi Per.

Since then, in various observations of the California Nebula and further nebulae of the summer and autumn sky, I have been able to repeatedly confirm the enormous gain provided by the 5.5nm filter. The filter is a game-changer – so much so that I decided to purchase it in pairs in both filter cell sizes. I do not consider myself wealthy, and this purchase leaves a dent in my wallet. But I would say that, considering the new vistas it opens up, this filter is economically priced.

I have a strong interest in stellar associations and their star-forming regions, which are home to many of the showcase pieces in the skies. These are often enveloped in extended nebular shells emitting mainly in H-Alpha/Beta/Gamma. Such H-Beta nebulae are at least as numerous and diverse as the OIII-dominated parts of star-forming regions, the latter only occurring in the active cores of those regions. They certainly cover much more of the sky than the OIII-dominated nebulae do. About 200 objects await visual exploration in H-Beta. I’m looking forward to progressively debunking Myth 2)!

There will of course be situations in which Baader’s 8.5nm CCD H-Beta filter or the commonplace 12nm H-Beta filters will be visually preferable to the 5.5nm filter. After all, nobody would claim that a single eyepiece is the optimal tool for all situations. What matters is that now, with the arrival of the Baader 5.5nm filter, amateur astronomers are at long last in a position to select from a set of different H-Beta filters – each with significantly different properties and all visually gainful – the one that is ideally suited to the situation, just as we select the proper eyepiece for the moment from our eyepiece case.

Christopher Hay is the co-author of the “Beobachteratlas für Kurzentschlossene” (BAfK), a German-language observing guide to the night sky. This is the first work in German which presents the OB stellar assocations systematically and sets out their physical and observational links with galactic nebulae. The BAfK is available for download free of charge (only in German) here: www.freunde-der-nacht.net

At the time of observation the H-Beta 5.5nm CMOS filter pair was a prototype on loan from Baader Planetarium and not yet on the market. I wish to express my appreciation of Messrs Baader for their awareness of the visual potential of narrowband filters, and my gratitude to them for their willingness to make the loan that allowed me to explore this potential.

About filter application on binoculars

Myth 4): Narrowband filter placement on eyepieces is not purposeful. My experience with many binoculars and filters over the years shows this to be false. It is important that the binoculars have plenty of eye relief so that a filter in its cell has enough room between eye and eyepiece lens and the entire field of view can still be taken in comfortably. For spectacle-wearers (such as me) it is important to be able to keep one’s glasses on when exit pupils are large, as is the case in nebula observations of this kind. This presents a further need for sufficient eye relief. The Fujinon FMT SX2 10x70 meets all requirements: large eye relief (23mm); excellent transmission in blue wavelengths; light enough to be used briefly without a mount (1,9kg); and the whole field of view is easy to take in (ease of view doesn’t have a neat English name but the Germans have one: Einblickverhalten). 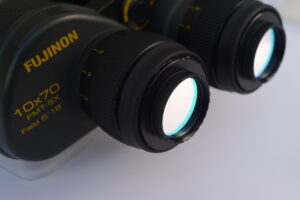 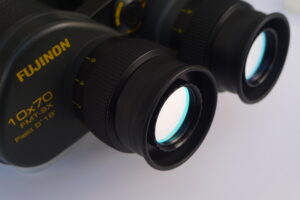 The shape of the eyecups combined with the large eye relief makes filter adaptation easy: Using very thin double-sided adhesive tape I stuck an adapter in, consisting simply of a disc with outer diameter 42mm (it comes from the T2 system) and 28.5mm female thread (available e.g. in Germany from Astro-Shop Vesting für ca. 15 EUR pro Stück). Done! Filters in 1.25”-threaded cells can now be screwed in and out in seconds. Care should be taken that they are of the low-profile type that is standard today. Older high-profile filter cells can cost crucial millimetres. 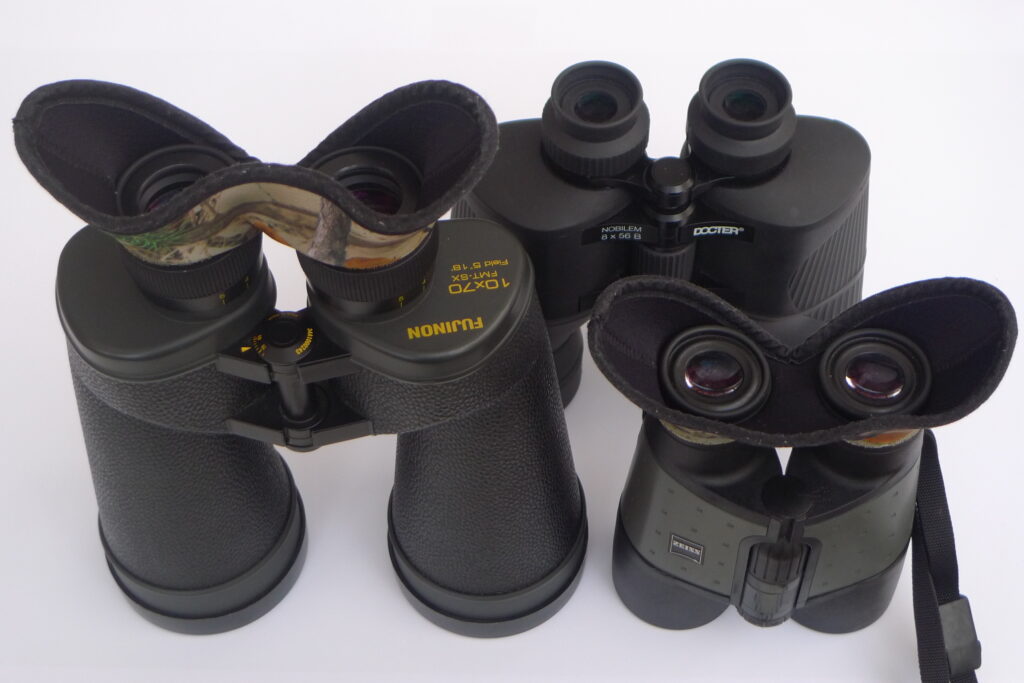 Extraneous light reflecting off the eye lens of the eyepiece is a major issue in narrowband observation. It must be shielded as effectively as possible. The “Bino Bandit” glare blocker is the best solution I have come across, particularly as a spectacle-wearer. It makes all the difference when the observing site is not fully dark – and when is it? Shown here front-left on the Fujinon FMT 10x70, front-right on the Zeiss Design Selection 7x45. The Docter Nobilem 8x56B in the background also combines all the attributes desired for filter placement on eyepieces. When I am looking for a larger field of view or aim to hold the binoculars steady for a longer period (the 10x70 is the best-performing instrument in this group, but its 1.9kg do get tiring quite soon), I take the 8x56 or 7x45. The 7x45 makes optimal use of the 45mm free aperture of 2-inch filter cells when these are placed over the objectives.

Some readers may find the 7/6.5mm exit pupils of these instruments excessive. However, when using the 5.5nm filters the sky background becomes truly dark, even under a NELM 5.0 sky. The observer’s eye pupil then opens up fully! The precondition is that extraneous light is shielded so well that the eye’s dark adaptation is maintained. Filtered and shielded in this manner, even under a suburban sky 10x70 binoculars show galactic nebulae brighter, larger and in better contrast to their surroundings than 10x42 binoculars do.