We have just had the Winter solstice (Summer solstice in the southern hemisphere) and, as 2022 draws to a close, we thought it would be interesting to let you know of some astronomy events to look forward to in the upcoming year ahead.

The Earth’s seasons change on four specific days each year. We have two solstices where the Sun appears to be at its lowest and highest points in the sky (December and June respectively) and two equinoxes where the length of day and night are similar (April and September).

As we have just had our winter solstice in the northern hemisphere, we thought we would start off with the equinox and solstice dates for 2023. 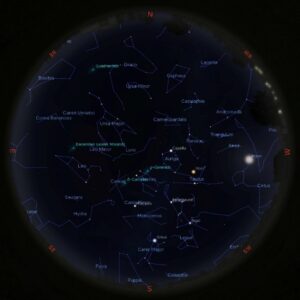 As the clocks chime at midnight and we welcome in 2023, our night sky will appear as in the simulation below (from Stellarium – minus the constellation names and lines of course!).

High above us will be the constellations of Auriga, Gemini and Taurus, in which Mars currently resides. These constellations have a number of star clusters which are nice targets with binoculars such as the Pleiades and Hyades in Taurus and Messiers 36,37 and 38 in Auriga.

A little lower in altitude and just west of the meridian is the magnificent constellation of Orion the Hunter, still well placed for observing the celestial splendour that is  Messier 42 – the great Orion nebula, a place of star birth. Towards the south will be the constellation of Canis Major with the brightest star in our sky (excluding our Sun), Sirius shining at magnitude -1.3.

Towards the east lies the start of the spring constellations of Cancer with Messier 44 (Praesepe) open cluster (another good binocular target), Leo which has the “Leo Triplet” of galaxies Messier 65, 66 and NGC3628 (a telescope target), Coma Berenices and Bootes all of which will start to take pride of place in the evening sky in a few months.

Meteor showers are always fun to watch as we don’t know exactly how active the display will be – they certainly keep us on the edge of our seats. Also, you don’t need any special astronomy equipment such as a telescope or binocular – you just need your eyes! However, its a good idea to have chair to sit on or a recliner/sun lounger so you can lie back to see a lot of the sky comfortably as you may be outside for a long while! It can also be cold so you could also get yourself under a duvet or inside sleeping bag to keep warm – just don’t get too comfy though and fall asleep and miss the meteor shower above you! Find out more in Celestron’s guide to observing meteor showers.

If you want to take photographs of the display to try and capture meteors as they streak across the sky, a camera set on a long(ish) exposure with a wide angle lens, mounted on a sturdy tripod such as the Baader Astro & Nature Photo Tripod w. Fluid Head and quick mounting plate (#2451020 , € 235) is all you need. For more details on imaging meteor showers a good introductory guide can be found here.

Below are the dates of the peak dates for favourable (where the Moon will not interfere too much) meteor showers in 2023. 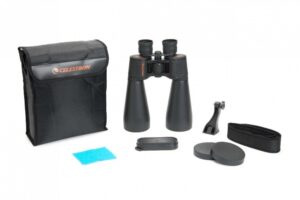 Our Moon will make its regular appearance in our night sky through 2023 where it will present its waxing and waning phases.

The Moon is a great celestial target for beginners and well-seasoned astronomers alike. Binoculars such as the popular Celestron 15x70 SkyMaster, which have 15x magnification and 70mm aperture objective,  are still relatively light-weight to be hand held, will show many surface features in detail compared to the naked eye. Even through a small starter telescope the views can be impressive with many craters, mountain rangers and “seas” being easily visible. 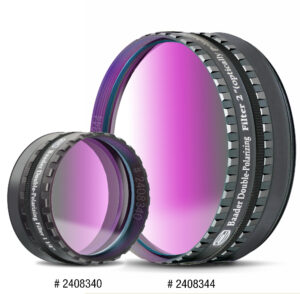 The Moon’s brightness can be overpowering and the use of a variable polarizer (which varies the amount of light entering the eyepiece) or a selection of neutral density filters can all help cut down the brightness and make observing the Moon more comfortable. A popular time for observing the Moon is when its not at or around its full phase as the Moon, Earth and Sun are in line so very little shadows are cast meaning Lunar detail is not as contrasty (and the Moon is very bright too).

The dates for the main phases of the Moon can be found here for the city of Munich for the year ahead. 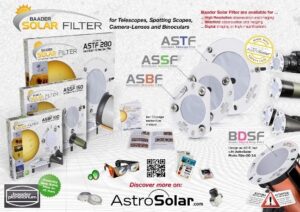 Our Sun continues on its journey toward Solar maximum in 2025.  So far this year we have had some lovely sunspots as well as some very nice prominences so the next couple of years look to be exciting.

Viewing or imaging the Sun requires extreme care and the use of proper, safe solar filters. For white-light views, you can observe the dark sunspots, faculae and solar granulation, Baader Planetarium offer their AstroSolar film so you can make your own Solar filter. Alternatively, there are ready-made AstroSolar filters which use their AstroSolar film but fitted in a specially designed robust metal housing for use with small camera lenses up to larger aperture telescopes. You can find more about their Solar products here.

To find the latest views of our Sun and how active it is, a good resource is the GONG near-real time data website which displays images of the Sun from a number of Solar observatories around the world in different wavelengths.

As celebrate the start of 2023, Mars will be the only planet to view as Jupiter and Saturn will have set before midnight, but all these planets are visible after sunset.

To see or image any planet in any detail you need a telescope. There is a very wide selection to choose from to suit all budgets from manually operated to fully computerised/GoTo instruments. For planetary and Lunar observers, a refractor, Maksutov Cassegrain or Schmidt Cassegrain optical design are popular choices which are available on different types of mount. Given the large choice of telescopes, if planetary study is of interest to you and if you need any advice on what to choose, contact one of our helpful authorised dealers or ourselves. 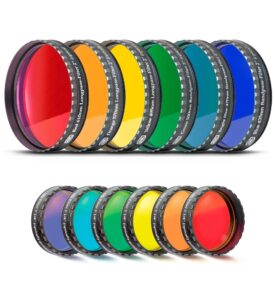 Colored filters can be beneficial with planetary observing. They can help increase the contrast of features through selective filtration. For example, a red filter can be ideal to help observe features on the red martian surface and the use of a yellow filter can help enhance cloud bands on Jupiter and Saturn.

The color and planetary filters from Baader Planetarium are planeoptically polished and coated so that they do not impair the image quality even at the high magnifications required for planetary observation. The filters with the colors (blue, light blue, green, yellow, red, orange) are available individually or as a set.

A useful guide for observing the planets (and Moon) with filters can be found in Celestron’s “What are the different types of eyepiece filters: Colored, Neutral Density and Polarizing?” article, or on the  Association of Lunar and Planetary Observers (ALPO) website.

For those interested in the planets and Moon, below are a few selected planetary events for you to put into your astronomical calendar: 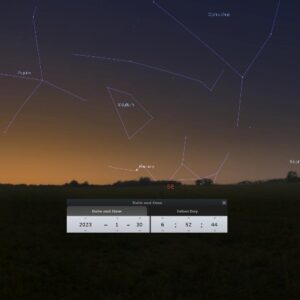 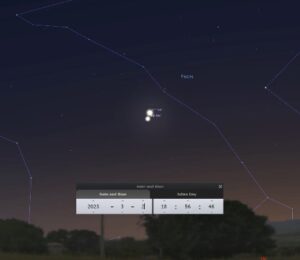 Close approach of Venus and Jupiter on evening of March 2nd 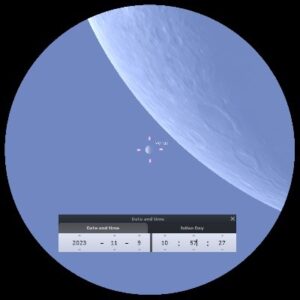 Before start of occultation of Venus by waning crescent Moon on Nov 9th. Simulation with a 8" Celestron SCT and Baader Hyperion 5mm eyepiece.

We have some Solar and Lunar eclipses this year. Of these events, the partial Lunar eclipse on October 28th that will be visible from Germany and the rest of Europe and will be the main event to view and image. For completeness, however, we have listed the other eclipse events just in case you want to travel to see them. 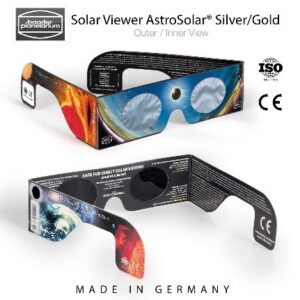 If you are travelling to see one of the Solar eclipses please always be aware of safety when observing or imaging the Sun. Please contact one of our helpful authorised dealers or ourselves if you have any questions about safely observing these events.

A guide to eclipses in 2023 can be found on the Time and Date website.

So as 2022 closes, our dealers and our team would like to wish you clear skies, happy observing and/or imaging and all the very best for the new year.