A Brief Overview of the Baader Tilter Family

If you notice that the edges of your image(s) are not sharp then image tilt may be present in your system. Image tilt is caused when the sensor is not perpendicular to the light path. The cause(s) of image tilt can be many and can include flattener/corrector lenses, tilted focuser drawtube, extension adaptors, camera angle adjusters as well as inherent camera sensor tilt in the camera body itself. Being able to correct for this image plane tilt is important and essential to get perfect focused sharp star images across the field of view. 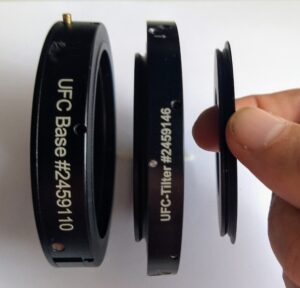 UFC Tilter: Click on the image to see the Tilter in action and how the adjustment are made.

Baader UFC-Tilter (#2459146 , € 276,- ) :  an S70 dovetail accessory that fits on the telescope side of the UFC and it is compatible with the entire Baader UFC system. The unit allows an adjustment tilt shift of the UFC Base (and an attached camera) of up to 1° to compensate for misalignments in the image field. The Tilter is only 9.75-10.50 mm in optical length depending on amount of tilt adjustment made.The wide range of telescope- and camera-side adaptors allow the UFC-Tilter combination to be used on a huge range of telescopes which have sufficient back focus from small refractors to the Celestron RASA36 and even larger instruments including PlaneWave telescopes and also a large number of cameras from different manufacturers.

To find out more about the UFC Tilter read Part 10 of our UFC series of articles.

M68 Tilter: Click on the image to see the Tilter in action and how the adjustment are made 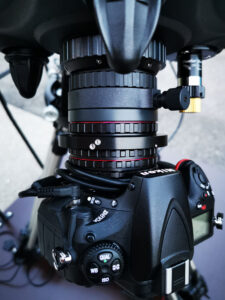 Baader M68-Tilter (#2458170 , € 255,- ) : is a new addition to the M68 (Zeiss) thread system of accessories which are used for sturdy connection of optical accessories and will result in no flexure under heavy equipment load. The M68 system allows you to mount heavy accessories (e.g. camera and filterwheel) in a rigid and stable fashion and without vignetting due to the large internal diameter, and with the inclusion of the M68 Tilter allows you to precisely adjust for any tilt in a simple and manner. The tilt mechanism, which is similar to that of the UFC Tilter and FCCT (below), is designed in such a way that if the M68 tilter is removed together with the camera and is replaced with another the adjustment is retained. The M68 Tilter is for use with the M68 system but it can be adapted to work with the popular smaller M42/M48 system - we will cover this in an article soon.

To find out more about the M68 Tilter and some examples of its use on a large aperture telescope with a heavy imaging camera and a DSLR read Christoph Kaltseis' interesting article: With the Baader M68 Tilter to perfect alignment. 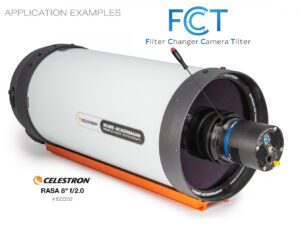 FCCT attached to the RASA8 with a QHY camera. The FCCTs are supplied with a long-handled hex-screewdriver for easy tilt adjustments 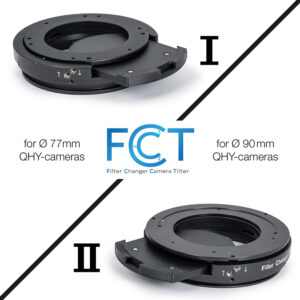 The two versions of the FCCT for different sized QHY camera bodies.

Filter Changer and Camera Tilter (FCCT):  a new specially designed dedicated accessory for use with the Celestron RASA8 imaging telescope and a range of QHY cameras only.

Unlike the UFC and M68 Tilters, which are in themselves a tilt-adjuster only, the FCCT combines the functionality of a tilter with an integrated filter changer. The FCCT was born to address the fact that due to the small amount of back focus of the RASA8 a wide range of the the popular QHY cooled CMOS cameras could not, until the release of the FCCT, be used with a filter drawer to swap filters and allow you to easily correct for image plane tilt. The FCCT allows you to easily swap filters and to correct for image tilt without the need to remove the camera when adjustments are needed. Two versions of the FCCT are available and which one you need depends on your camera model: 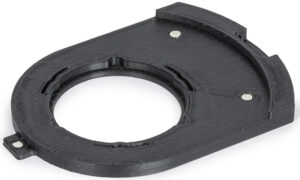 A 3D printed filter holder: in this example it is the 36mm version. The two small silver "dots" are built-in Neodymium magnets to ensure that the filter drawer is always held in the same position and cannot fall out.

To accompany the FCCT for using filters there are three different versions of high quality 3D-printed filter holders, available separately (individually or in packs of 4) that accommodate unmounted filters with standard sizes of 31 mm and 36 mm and a new 47.4mm dimater size (Baader 2" mounted filter but without a cell). For the high-speed RASA8 telescope you can use the Baader LRGB CMOS Optimised filters and the Narrowband and Ultra Narrowband Highspeed H-Alpha, S-II and O-III filters which are all available singularly in the aforementioned 31/36/47.4mm sizes. An FCCT I to FCCT II Expansion Kit for QHY 268 / 294 (#2459075 , € 80,- ) is available separately that allow the FCCT I to be converted to an FCCT II should you change or upgrade your camera.

To find out more about the FCCTI and II and how it is used with the RASA8 and QHY cameras you can read the detailed user guide and also an article on the RASA 8 with QHY Cameras and the FCCT.

Each of the three models in the Tilt family help correct for tilt but their application and usage are different. What they do share in common and is a major and important "practical feature" - that the fine tilt adjustment screws are located 120° apart on the outside edge meaning that they are easily accessible even with a camera attached. Other tilt adjusters have these on the camera-facing side meaning that they are often obstructed and require repeated repeated threading and unthreading of cameras and adaptors. With the Baader family of tilters, the whole "tilt adjustment operation" can be achieved without imaging train removal. Tilt adjustment is performed using three pairs of opposing set screws, on the tilter's outside edge, which independently move the inner tilt mechanics. These hex screws have tapered and hardened points that bear against a precision hardened ‘zero-clearance’ internal steel-counterpart. The direction that each set screw moves the tilter is shown with a helpful etched arrow next to each individual adjustment screw. You can read more on how to finely adjust tilt with the UFC-, M68- and FCCT-Tilters in an article here. All three Tilters are of all-metal construction and are made to very high precision in Germany.

The table below gives you a "summary" of some of the specifications for the current tilter family.